Vacheron Constantin debuts its new collection at Abbey Road Studios. The Peak drops into London to live up the chic retro. 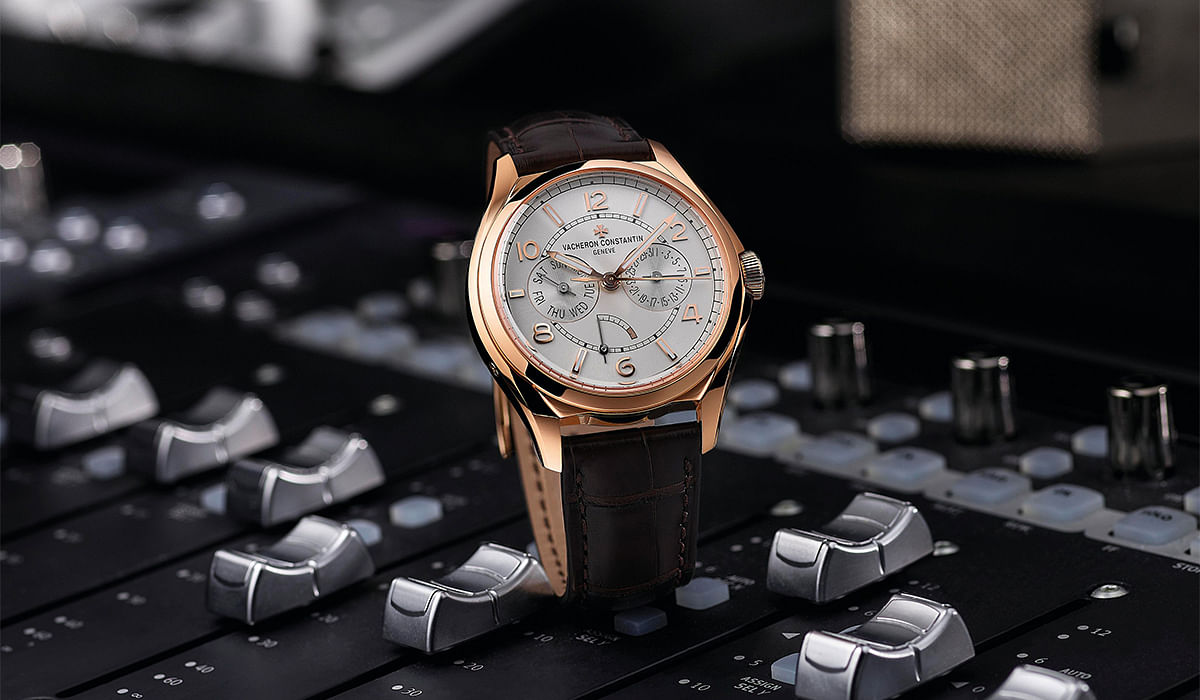 [dropcap size=small]J[/dropcap]ournalists do not typically begin the day in the den of a century-old Savile Row institution, downing whiskies of up to 60.8 per cent ABV. Not when they are on a work trip, but luxury watch brand Vacheron Constantin has taken a fresh approach in introducing its latest Fiftysix watch collection – bowl jaded writers over by immersing them in exciting, retro-hipster activities. And what better place to do that than at the centre for the dapper gent: London.

It is in these elucidating sessions of events that I am swept up. I’m thrown into crash courses in rock-piano playing and bartitsu (that’s traditional English cane-fighting, Sherlock Holmes style), culminating in the unveiling of the brand’s partnership with renowned recording studio, Abbey Road Studios.

Explaining this lifestyle-driven approach, Vacheron Constantin chief marketing officer Laurent Perves shares: “It’s easier to talk about watches in an atmosphere that’s friendly and open, and where people feel comfortable asking questions and having discussions. Sometimes, these discussions lead to another topic, and help to create a link between watchmaking and something else.”

The company is not precious about its timepieces either, loaning the Fiftysix watches to the assembled group for a test run over the next two days. The following is what we learn.

The Fiftysix Day-Date in pink gold easily goes from day to night.

The Fiftysix Complete Calendar in steel.

An orchestra set-up at Abbey Road Studios, where many famous albums and movie soundtracks were recorded.

The Fiftysix Tourbillon in pink gold.

Colin Firth is Huntsman-dressed, the Savile Row stalwart featured in that cinematic ode to British tailoring, Kingsman. Huntsman’s senior client manager, David Goggins, leads a tour of the venerable tailoring house, under the glassy gaze of two mounted stag heads, which was inexplicably left there by a customer in 1921.

While sipping a selection of single malts in Huntsman’s tucked- away gentlemen’s den, we reflect on how the art of craft is still very much alive. With the hunting season just around the corner, the tailors are busy working – by hand, of course – on sporting classics such as plus fours, or trousers that extend four inches below the knee. Huntsman has long been a favourite with celebrities, aristocrats and other monied young men about town. Gregory Peck, for instance, had some 200 garments made by the company. We also see patterns that had been made for the late musician David Bowie. According to Goggins, the passion for hand-tailored finery has not waned among the current generation: Younger folk are not just having suits made at Huntsman – they are also eager to work there. (Remarking on this interest, Goggins shares: “We receive more than half-a-dozen applications every day.”)

Perhaps, as many luxury-goods purveyors insist, the love for handcrafted beauty is eternal, and has little to do with age, or shifting consumption paradigms.

With the Fiftysix’s stylish marketing and relative accessibility – prices start at $16,900 for the basic automatic in steel – one is inclined to think that the series is its maker’s way of reaching out to a younger audience. Perves firmly rejects this notion, emphasising that the intention was to create “a watch that could be worn every day”. He shares: “One of our clients came to our manufacture in Geneva to collect a highly complicated Les Cabinotiers watch that he had ordered a while ago. He collected a Fiftysix Day-Date in gold at the same time. He told us, ‘It’s great because now I have my Cabinotiers piece that I can look at, and my Fiftysix that I can wear.’”

(RELATED: Why Swiss luxury watchmakers need to lure millennials in the digital space – and soon)

To be sure, the Day-Date is one versatile piece: Despite its gleaming polished gold case, it does not feel overly fussy during the day’s casual activities, while being dressy enough for the next night’s gala event. The watch’s dimensions – a diameter of 40mm and a thickness of 11.6mm – place it squarely in the territory between smallish formal watches and bigger, sporty ones. This fine balance between formal and casual is further achieved by aesthetic details such as its mix of Arabic numerals (traditionally used on sportier timepieces) and dressier baton indexes.

(RELATED: Luxury watchmakers are turning watch straps into the stars of the show)

There are gala dinners, and then there are those held in a room where soundtracks of iconic movies such as The Lord of the Rings and Star Wars were recorded. On the second night of the London trip, Vacheron Constantin toasts its new partnership with Abbey Road Studios with a gala on the latter’s premises. A pretty unassuming, two-storey affair, the building that houses Abbey Road Studios was originally a nine-bedroom house dating back to 1829. It’s best known for being the recording studio of choice for seminal musicians such as The Beatles, Aretha Franklin, Pink Floyd, Adele and Sam Smith.

The evening’s highlight is a performance by English poet and musician Benjamin Clementine (if you ask “Who?” – join the club). Backed by five string musicians, the lanky, soulful musician plays the piano while performing songs such as Eternity – the first song co-produced by Abbey Road Studios and Vacheron Constantin. Critically acclaimed yet relatively unknown, the Mercury Prize winner is one of four talents fronting the brand’s new campaign, titled One Of Not Many. The other three campaign faces are singer-songwriter James Bay, multidisciplinary designer Ora Ito, and photographer and explorer Cory Richards.

It’s a win-win situation. While it can’t hurt the heritage watch brand to be associated with such on-the-brink, niche coolness, kudos to Vacheron Constantin too for spotlighting talents who aren’t particularly well-known by mainstream audiences, instead of going the easy route by slapping a watch on the wrist of a celebrity ambassador with a huge ready fanbase.

Says Perves: “What matters is the convergence of our values, and the fact that they are doing similar work to ours, which is to create things through innovation and very hard work. For us, that is what’s really important, not whether they are famous.”

THE FIFTYSIX FAMILY CONTINUES TO GROW IN BREADTH AND DEPTH

For those who think that the Fiftysix is a simpler collection for a non-traditional watchmaking audience, the latest addition to the collection may finally convince them otherwise. At a private party held at the exclusive Mayfair club Loulou’s – the royals William and Kate, apparently, are regulars – Vacheron Constantin showcases the new Fiftysix Tourbillon, the first major horological complication in its youngest family.

Like the other watches in the collection, the 41mm, pink-gold timepiece has a slim, yet sturdy, profile and gently curved lugs that help it to sit nicely on the wrist. This we ascertain at one point during the evening, when Vacheron Constantin’s style and heritage director, Christian Selmoni, plopped himself down on the plush pink couch to show us the Fiftysix Tourbillon he is sporting.

Taking centre stage on the watch, of course, is the large tourbillon at six o’clock. The highlight of the in-house-developed, ultra-thin automatic movement 2160, the tourbillon has a carriage shaped like a Maltese cross, the brand’s emblem. The tourbillon’s handcrafted finishings, such as chamfering, require more than 12 hours of work to complete.

Says Perves: “The Fiftysix collection is a full-fledged collection, now ranging from simple displays to complications. For us, it’s never a matter of trying to get older or younger clients, but to cover their key needs. In the case of the Fiftysix, we know that there is a need for a watch that can be worn every day, that can accompany our clients who are looking for something that could be adapted for different parts of their lives.” Mission most definitely accomplished.