The Omega Speedmaster – the only watch approved by NASA for space travel – is having their 60th anniversary, plus three other chronograph classics from Zenith, Audemars Piguet and Tag Heuer. 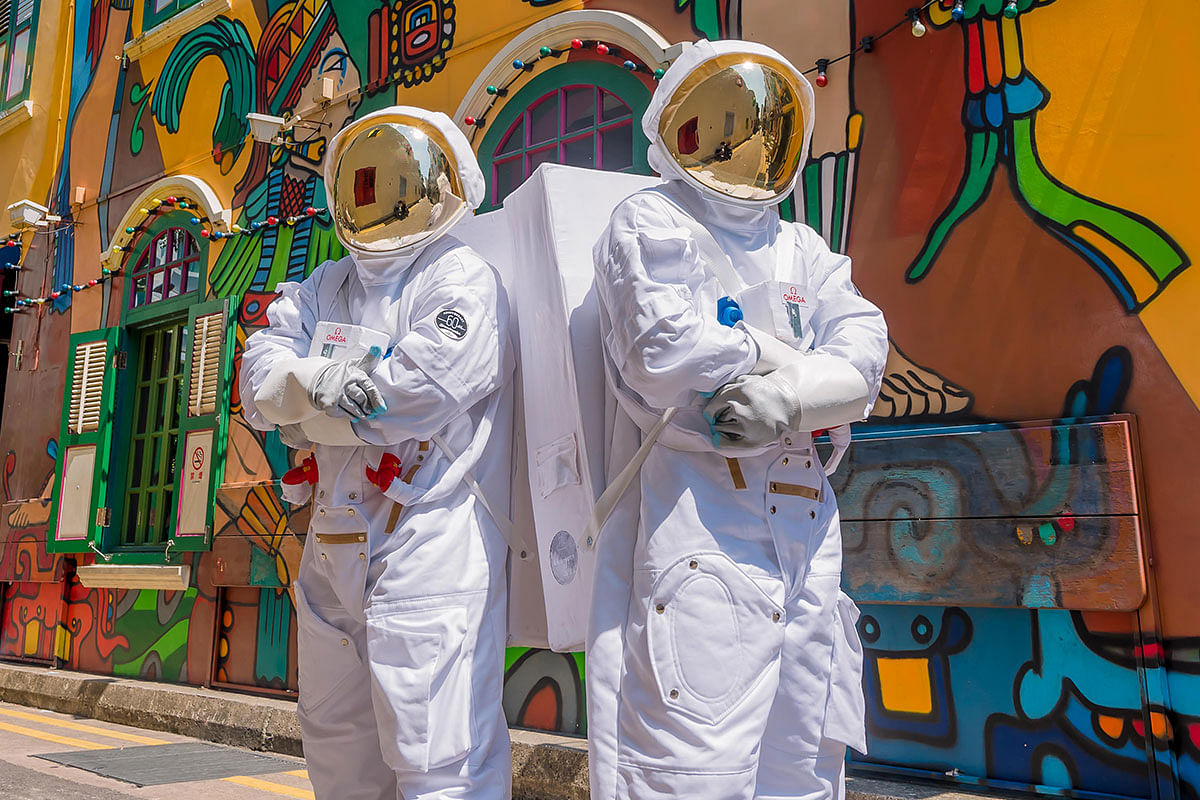 [dropcap size=small]O[/dropcap]n April 13, 1970, two days after the launch of the Apollo 13 lunar exploration mission, astronauts James Lovell, John Swigert and Fred Haise were alarmed by a big bang which rocked their spacecraft.

The oxygen tank had exploded, prompting Swigert to radio ground control with that now immortal phrase: “Houston, we have a problem.”

The craft was crippled. What was supposed to be the third attempt to land on the Moon was no longer possible.

There were other resulting technical failures, which made returning to Earth, 322,000km away, a perilous exercise.

Luckily, Swigert’s Omega Speedmaster – the only watch approved by the National Aeronautics and Space Administration (Nasa) for manned space flights – saved the day. The crew used it to time a 14-second manoeuvre to put the craft on a safe trajectory back to Earth.

It worked. The Apollo crew landed safely in the South Pacific Ocean on April 17.

Even before that, however, the Speedmaster – rolled out by Omega in 1957 – had already made headlines. It had been on every piloted Nasa mission since 1965. Both Neil Armstrong and Buzz Aldrin wore Speedmasters when they became the first men to land on the Moon in the 1969 Apollo 11 space mission.

Not surprisingly, the watch has achieved cult status in the world of chronographs.

Omega is celebrating the 60th anniversary of the Speedmaster with an exhibition which opens today and runs till July 9 at The Shoppes at Marina Bay Sands.

Chronographs are watches with stopwatch capabilities. They have counters or mechanisms for measuring elapsed time, anywhere from 30 minutes to three hours.

Developed for King Louis XVIII of France to time racehorses in the early 1800s, the chronograph became a trailblazer in watchmaking in the early 20th century.

It gained further traction when watchmakers began incorporating a rotating bezel tachymeter, which calculates speed over a specified distance, in the 1960s.

Its popularity prompted watchmakers to beaver away at patenting an automatic version. Breitling, Tag Heuer and Hamilton worked with movement expert Dubois Depraz in the late 1960s to come up with what is now known as the Calibre 11 movement.

Not to be outdone, Zenith came up with its El Primero movement, while Seiko produced the 6139 Auto Chrono.

(RELATED: Meet the veteran watch salesman of The Hour Glass who personally served the Sultan of Johor.)

Naysayers predicted the death of the chronograph when Seiko unveiled the world’s first quartz watch in 1969, but the chronograph has more than stood its ground. After all, the Speedmaster saved the lives of the Apollo 13 crew when no computer could.

Once a feature in only high-end models, the chronograph is now ubiquitous.

Omega chief executive Raynald Aeschlimann says it is not difficult to understand its appeal.

“It represents a unique echelon of watchmaking that embraces beauty, complexity, functionality and history. These are all powerful factors for collectors. When you have a combination of all of those things, it makes a watch more than a watch.”

Indeed, many people use their chronographs for a wide variety of functions, from timing their bakes in the oven to reminding them of their appointments.

But an equal number either do not use the feature or know how to use it.

“They are really sporty. But I don’t use the timer; the less I mess around with the mechanism, the better,” he says with a laugh.

Mr Aeschlimann says it is all about the look.

“A chronograph has symmetry and balance. It makes a watch stand out and gives it an added edge of style. There’s also an appreciation for craftsmanship. There’s mechanical complexity in a chronograph and, even if you don’t use it, you can still admire the original purpose and historical significance.”

Over the decades, many chronographs have become instant classics. Many models now cost a fortune, but watch companies have been issuing variations and updates as well as new releases. Here are some:

Unveiled at Baselworld earlier this year, this Speedmaster harks back to a design from 1968 with a minutetrack on the dial. Measuring 44.25mm in diameter, it also boasts features such as bevelled arrowhead indexes filled with SuperLumiNova and expanded sub-dials.

There are models crafted from stainless steel, 18k Sedna gold and ceramic. The domed sapphire crystal has also been refashioned to make it thinner.

Some models come with a sporty leather strap, with perforated holes revealing rubber in striking orange.

The first Royal Oak was designed in 1972. This model is from a new collection targeted at the young: a handsome 42mm piece with its stainless steel case, famous octagonal bezel, midnight blue counters and a black “Mega Tapisserie” dial with standout Arabic numerals.

It comes with a handstitched large square scale alligator strap and has a power reserve of 50 hours.

(RELATED: How much extra should the “Swiss-made” label really cost?)

This updated release pays homage to 1960s Zenith chronographs, with baton hour markers and a tachymetric scale on the edge of the dial. There are, however, new touches, including leaf-shaped hands and the El Primero calibre 4069 inside.

At 38mm, it is slightly larger than the vintage originals. Available with blue or brown dials.

Yet another nod to heritage, this is an updated version of the Carrera design, which is more than 50 years old.

Instead of the Tag Heuer logo, the dial boasts a retro Heuer logo reminiscent of early Carrera models.

The design is back-to-basics simple, with a Panda (black and silver/white) dial and 39mm case. It has a perforated strap, with the clasp bearing an engraved Heuer logo.

Adapted from The Straits Times.