As uncertainty continues to permeate the world as we move into a new year, fashion designers are suggesting bold ways to gear up. 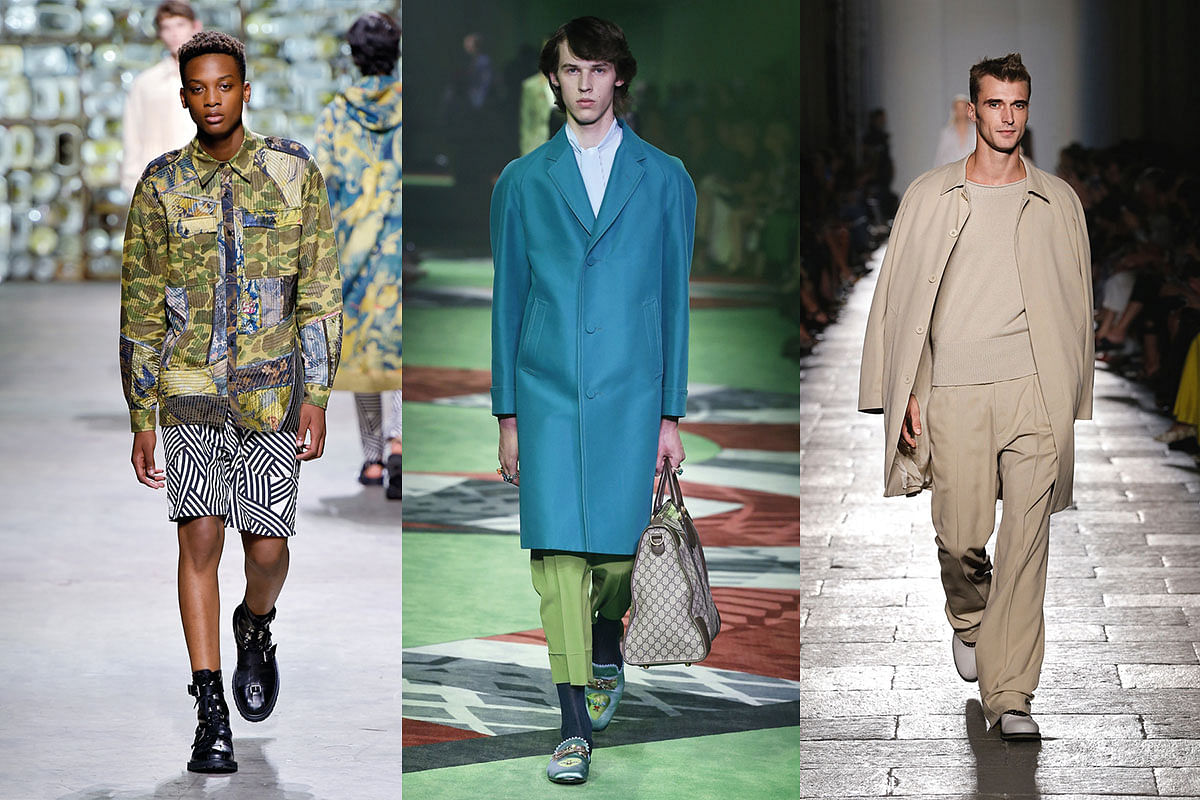 Unless you’re a fan of American designer Thom Browne, who has established himself as the master of the shrunken suit over the past 16 years, chances are that you reserve shorter-length trousers for the weekends – if you are into said ankle-grazers in the first place.

For Spring/Summer 2017, however, a significant number of designers are truncating the trousers of more formal ensembles. Aside from lopping some of the length off casual trousers covered with music-related motifs, the Dolce & Gabbana designer duo also took some of the formality off their suits (including the odd tuxedo) by pairing jackets with tapered, ankle-length trousers.

We think cropped pants look best when they’re part of an outfit that falls somewhere in the middle of the casual-formal spectrum. Think funkier, less formal suits such as the speckled pink outfit spotted at Bally, or the sharply tailored, cool-grey trousers by Jil Sander.

The fastest way to add a bit of pep to your wardrobe right now: Wear yellow. The shade of sunshine brightened up several Spring/Summer 2017 runways, in varying measures. At Hermes, menswear artistic director Veronique Nichanian offered several ways to wear the colour: a bomber jacket or a goatskin T-shirt, or, for the truly gutsy, perhaps a full-on weekend combo of yellow polo shirt with matching shorts. Too much? No matter – the hue was also used in small doses. A dark cardigan featured a few outsized yellow diamond motifs, a punchy riff on the traditional argyle knit.

In general, yellow plays well with grey or brown (wearing bright yellow and black sometimes creates a bit of a bumblebee effect), or even with other citrusy hues (Paul Smith boldly paired his banana-hued suit with orange sneakers). The latter option is best left to those who don’t mind a bit of attention, or are in serious need of a sartorial pick-me-up.

As for that still-popular myth that yellow does not suit Asian skin tones? Not true, and as outdated as the notion that black should not be mixed with navy. With the yellow spectrum from pale buttercup to dark mustard, it’s all a matter of finding the tones that you feel comfortable in.

It was the proliferation of Teva-like sandals that first clued us in to the fact that the great outdoors was a major inspiration for the Spring collections. Hermes, Berluti, Louis Vuitton – this season, many of our favourite brands are offering luxe leather versions of the nylon-and-rubber sandals that was once standard apres-sports footwear for weekend warriors everywhere.

This style season, it’s not just footwear that’s made for walking (frankly, that’s the most strenuous activity we would think of putting those monogrammed sandals through) – so were the bermuda shorts, rain-resistant coats, technical jackets and roomy backpacks. Prada led the movement, with creative director Miuccia Prada outfitting models in jackets made of bright technical fabric, sporty tights and neoprene boots (or yes, Teva-like sandals).

If electric blue and orange aren’t quite to your taste, may we suggest the more muted stylings of made-for-moving outfits by the likes of Brunello Cucinelli and Salvatore Ferragamo. The former’s smart-casual propositions include a burgundy-brown technical-fabric vest worn over casual separates, while an off-white, safari-inspired ensemble stands out among the latter’s outdoorsy options.

(RELATED: This season’s trendy fashion is for the active, from leather tracksuits to weatherproof clothing.)

This season, several designers have gone down to earth – in a way. From beige to dark browns, an earthy palette was used in a number of collections, at times helping to balance out zanier design elements and at other times, serving as a key component of largely muted collections.

While awaiting the arrival of its new creative director Haider Ackermann, the Berluti design team created a collection that was tasteful but low on surprises. The brand’s versatile separates and suits were rendered in Everyman’s shades: beige, brown, grey and blue.

Where neutral tones truly stood out was when they were juxtaposed against elaborate or quirky details. The travel-themed Louis Vuitton collection, for instance, included a tan bomber in impossible-to-miss ostrich skin as well as a beige alligator trench coat. Eclectic Italian label Marni, on the other hand, put an eccentric spin on light-brown ensembles, once synonymous with boring office wear: Trousers with cut-outs above the hem and Velcro-fastened coats were anything but workaday.

Gaining traction for years now, military-inspired style has established itself as a force in fashion. The sophisticated way to subvert standard issue right now: equipping yourself with prints modelled after army camouflage.

These motifs are made for catching the eye of the onlooker, rather than concealment. Hermes used dynamic horse motifs to create an equestrian-themed camo print on a bomber jacket (itself a piece of clothing adopted from the armed forces), while Givenchy’s version included elements adopted from dollar bills.

The military pattern was also softened in other creative ways. Dries Van Noten mixed camo with floral prints in a patchwork style, which made for an almost homespun balance of yin and yang. For Bottega Veneta’s 50th-anniversary collection, creative director Tomas Maier softened the military pattern by rendering it in a painterly style – why make war, after all, when you can make art instead?

(RELATED: 6 military-inspired get ups for standing out.)