IWC Schaffhausen is bringing back the thrill of aerial adventures with a slew of new Pilot’s Watches. 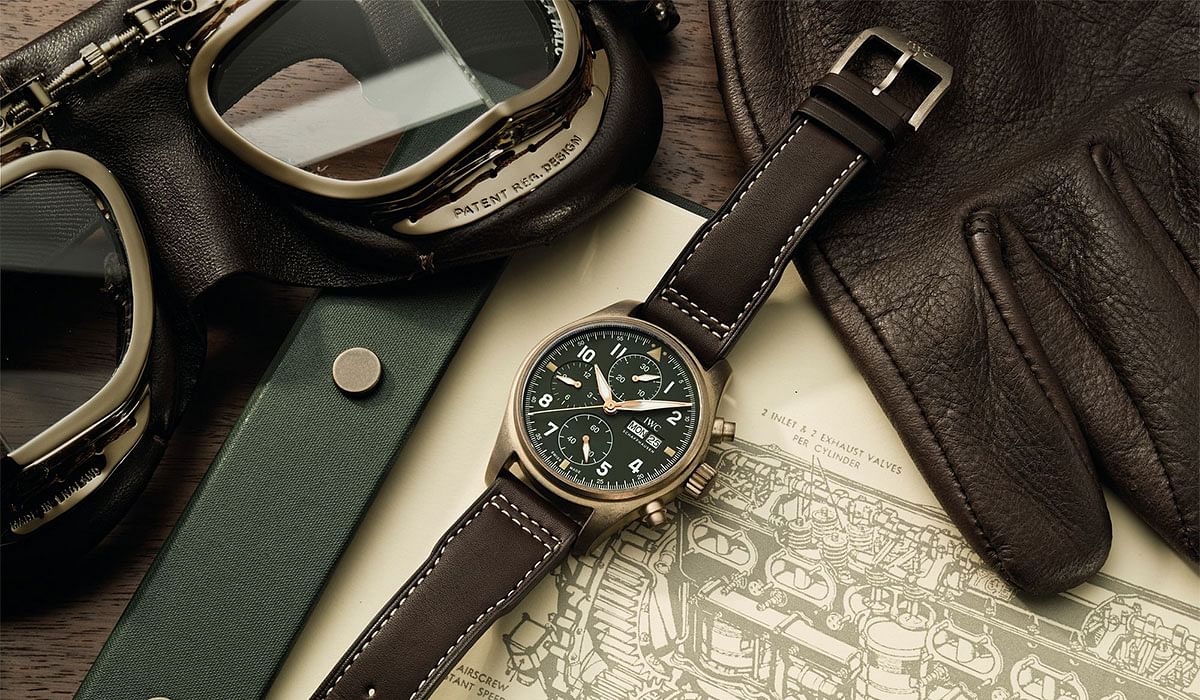 [dropcap size=small]A[/dropcap]viation watch enthusiasts will surely be familiar with IWC’s Pilot’s Watches – unquestionably one of the most well-known tool watch collections around. The IWC Pilot’s Watch family has plenty of history, having made precise, handsome timepieces modelled after iconic navigation watches like the Mark 11 for over 80 years. And there’s still plenty of inspiration left, as evidenced by this year’s fleet of high flyers.

The bronze used in the Pilot’s Watch Chronograph Spitfire gives it a vintage look.

The special material included in the name of the Pilot’s Watch Double Chronograph Top Gun Ceratanium is as lightweight and durable as titanium.

The first to grab headlines will be the Pilot’s Watch Timezoner Spitfire Edition “The Longest Flight”. The 250-piece special edition is dedicated to the “Silver Spitfire – The Longest Flight” expedition, where two British aviation enthusiasts, Matt Jones and Steve Boultbee Brooks, will be taking off in a silver Spitfire Mark IX – a legendary fighter plane – and flying it around the world as early as this August. By the time they return to England at the end of the year, they would have made over 150 stops in more than 30 countries.

Travelling across so many time zones requires quick adjustments to each, which is what the new Timezoner excels at. The patented mechanism allows the wearer to simply rotate the bezel to switch time zones. Rotating it also causes the hour hand, date and integrated 24-hour display to jump accordingly. The 82760 IWC-manufacture movement features IWC’s Pellaton winding system, with components made from wear-resistant ceramic, and it comes with 60 hours of power reserve.

The main appeal of bronze watches, aside from its vintage appearance, is that the material develops a patina over time, making the watch unique to its wearer. The propeller-shaped hands are a signature of IWC’s Pilot’s Watches. Here, they are plated in gold to match the case and stands out beautifully against an olive green dial.

The Chronograph Spitfire is the first watch from the Pilot line to house a movement from IWC’s relatively new 69000 family of calibres. First introduced in 2016, the in-house calibre debuted in an Ingenieur, followed by a Portugieser. The self-winding column wheel chronograph, which specifically uses the Calibre 69380, beats at 4Hz and is protected by a soft-iron inner case for resistance against magnetic fields.

Not to be outdone in the non-traditional materials department, the Top Gun line welcomes the use of the innovative Ceratanium with the Pilot’s Watch Double Chronograph Top Gun Ceratanium. Developed by IWC, the patented material is as lightweight and durable as titanium, and has the same hardness and scratch resistance as ceramic. Since IWC’s Top Gun watches are designed with robust materials to honour the elite jet pilots in the US Navy’s Strike Fighter Tactics Instructor Program, it makes sense for Ceratanium to enter this branch of the Pilot family. (The material was first used in an Aquatimer in 2017.)

Ceratanium’s natural matte black colour also enabled the brand to create its very first completely black Pilot’s Watch without the use of any coating. This means all the watch components, such as push buttons and pin buckles, are the same jet colour. This is a watch that can endure extreme weather conditions, and is accompanied by a rubber strap.

(RELATED: What is Cerachrom and why is it found in Rolex watches?)

The new IWC Pilot’s Watch collection also has a dressier, more romantic side. Since 2005, IWC has been in collaboration with the family of Antoine de Saint-Exupery, and, for the last six years, has made watches that pay tribute to both his accomplishments as an aviator and to his greatest literary work, The Little Prince.

The newest edition, the Big Pilot’s Watch Constant-Force Tourbillon Edition “Le Petit Prince”, comes with some notable firsts: It is the first Pilot’s Watch to feature a tourbillon (and one with a constant- force mechanism at that), and it is the first watch from IWC to use hard gold.

IWC’s way of eliminating force variations involves separating the escapement from the direct flow of force from the dial train, while re-tensioning a balance spring every second. This temporary store of energy will transfer pulses evenly to the escape wheel, optimising precision.

A complication and mechanism as delicate as that deserves a little glamour. In keeping with the Pilot family’s DNA of toughness, hard gold was the logical choice. The red gold alloy has a modified microstructure that makes it significantly harder and up to 10 times more wear-resistant than conventional red gold.

IWC’s Pilot Watches may have been built with pilots in mind, but it’s a collection that welcomes and is loved by any who embraces a spirit of adventure.