Rolex: explore the brand’s long history through the world of sailing

The watch brand is linked to the sport by the Oyster Perpetual movements. 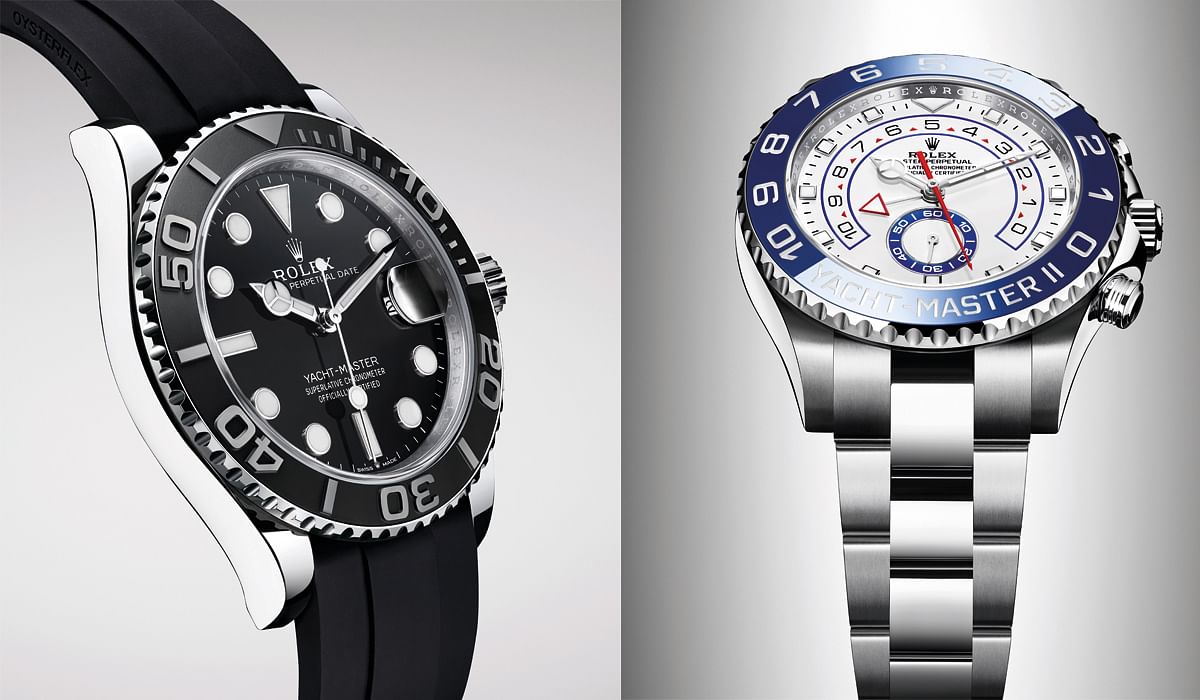 [dropcap size=small]A[/dropcap]t one point along his epic west-to-east, global solo sail that began in 1966, Sir Francis Chichester’s twin- mast yacht, Gipsy Moth IV, capsized in the Tasman Sea. The British yachtsman would later write, on a photograph to be autographed: “Gipsy Moth IV needs repairs… but the Rolex ticks on happily.”

The Rolex in question was a Rolex Oyster Perpetual, a chronometer – an appellation for watches certified to keep extremely precise time – that served as one of his navigational instruments during his 226-day voyage. Clearly impressed by the waterproof timepiece that had seen him through his journey, the entrepreneur and sportsman wrote to Rolex in 1968: “During my voyage… my watch was knocked off my wrist several times without being damaged. When using (it) for sextant work and working the foredeck, it was frequently banged, also doused by waves coming aboard, but it never seemed to mind all this.”

Today, watches designed for the needs and rigours of sailing are hardly rare, but they owe a debt to Hans Wilsdorf, who started Rolex in the early 1900s. In those days, chronometers were typically large marine timepieces, which had to keep accurate time for maritime navigation. For everyday use, pocket watches were then the norm. Wilsdorf ’s company paved the way for maritime wristwatches by obtaining the first chronometer certification for a wristwatch in 1914, and subsequently creating the waterproof Oyster case – with patented screw-down caseback, bezel and winding crown – in 1926.

(RELATED: Rolex watches every successful man should own before 40)

Today, Rolex’s catalogue includes two sailing- centred timepieces, one of which is the Yacht-Master. Launched in 1992, the watch is both dressy and sporty, with a key feature being its bidirectional rotating bezel that can be used by sailors – and other wearers – to track various timings, such as the time taken between two buoys. This March, its latest iteration was unveiled at Baselworld. The Oyster Perpetual Yacht-Master 42 (pictured) is the largest yet of the family, with a 42mm case – in white gold with a Cerachrom bezel insert in matte black ceramic. Completing its sporty look is the Oysterflex bracelet, made from rubber overmoulded with flexible metal blades.

It’s powered by one of Rolex’s latest movements, calibre 3235, an automatic mechanism featuring the brand’s Chronergy escapement (an energy-efficient system using a skeletonised escape wheel) and antimagnetic Parachrom hairspring. Aside from a depth rating of 100m, the Yacht-Master 42 has the precision that’s a must for any maritime watch worth its salt: Bearing Rolex’s Superlative Chronometer certification, the watch has a variation of just -2/+2 seconds a day, more than twice the requirement of a regular chronometer. Sir Francis would have approved.

Counting down with the Oyster Perpetual Yacht-Master II.

In 2007, a second sailing-focused timepiece joined the Yacht-Master. The Oyster Perpetual Yacht-Master II is currently Rolex’s largest watch, with a diameter of 44mm. Taking up most of the dial, the regatta countdown display lets the wearer time a countdown of up to 10 minutes, which is the maximum amount of time in the preparatory stage of a regatta.

During this countdown, competing vessels have to sail near the starting line without crossing it. A crew’s skipper can use the regatta countdown function to time the processes leading up to the start of the race, so the team can get a strong start in the best position. Using its bidirectional rotatable bezel, the chronograph can be programmed to memorise a choice of duration from 10 minutes to one minute. This countdown can be further synchronised on the fly, as two more preparatory signals will be sounded.

(RELATED: The definitive guide to all the Rolex watches you wish you could own)