Also a dealer, the Englishman has sold some of the most important Cartier creations to aristocrats and celebrities. 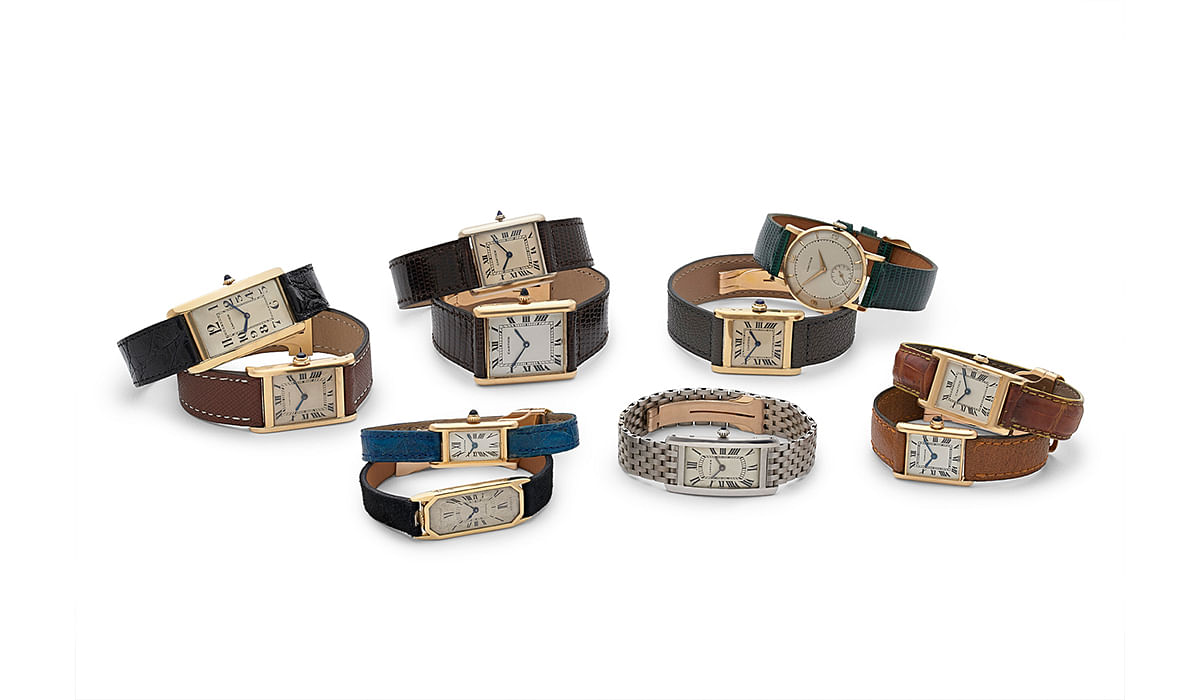 Harry Fane is a promiscuous man. At least, that’s the case when it comes to Cartier Tank watches. “I often say this is the watch I’ll have for the rest of my life, but then a prettier one comes along and out with the old!” said the impeccably suited Brit, a well-known collector of vintage editions of the iconic Cartier watch, and also a dealer who has sold some of the most important Cartier creations to aristocrats and celebrities.

Fane was in Singapore in May to exhibit and sell 31 vintage Tank watches exclusively at multi-label boutique Dover Street Market. The watches, which are from the 1920s to the 1970s, are extremely rare, including a highly coveted 1945 Tank Chinoise with a case inspired by 18th-century Chinese Chippendale furniture-inspired case. “I also brought a London Tank from the Swinging Sixties when Cartier made a series of watches unique to London. People go crazy for them.”

As a dealer of objets d’art in the early 1970s, Fane would sporadically come across pieces from Cartier. It started with a lighter, a clock and then some cufflinks – small accessories and items that soon birthed his hunger more. “I spent days poring over old archives. I bought more Cartier over the years but the one thing I really enjoy is a watch,” he said.

Today, Fane has his own private gallery in London. Established in 1978, Obsidian deals exclusively in vintage Cartier watches, objet d’arts and jewellery. Fane himself has about 45 Tank watches in his current collection, though he estimates that at some point he had amassed about 200 pieces of them.

He showed us the 1924 Tank Normale – the first model of the signature design – on his wrist, which he got three years ago. Like other watches of that era, it is tiny by today’s standards, but wears perfectly well. That, said Fane, is the power of timelessness: “It’s amazing how you would still want a Tank watch 100 years since it was introduced. Many things that were designed as little as 20 years ago already look dated.”

His perennial search for the next vintage Cartier watch started with a “gift” from Cartier. “In the 1980s, I presented a Mystery Clock from the 1920s to Cartier,” Fane recalled. “I had bought it from a private collector when I was younger, and I knew Cartier wanted to own it.” The cheeky man then suggested that as a way of thanking him for bringing the coveted clock back to them, the company should give him a Cartier watch as a present.

“They said, no, no, and I said, yes, yes,” he laughs. After much discussion, they reached a satisfactory agreement, where Fane could indeed choose a watch for himself. A modern 1980s Tank Americaine became his first Cartier watch. But that wasn’t enough for Fane, who decided that he wanted vintage watches, especially one with many past lives, stories and of course, a beating mechanical heart. “That started the whole ball rolling for me,” said Fane. Here, he shares his thoughts on seeking out rarities from the past, partnering with one of the edgiest fashion retailers around today, and the one watch he regrets selling.

(Related: Rolex: explore the brand’s long history through the world of sailing)

Tell us about your collaboration with Dover Street Market.

I love how these elegant icons fit very well into this alien environment. We had a young guy at our previous exhibition in Japan who came in wearing a Hawaiian shirt, flip flops and torn jeans – and he bought two Cartier watches. But that just underlies the strength of vintage Cartier design. If you look now, Cartier is re-introducing the same models that I have here. And they look exactly the same, except mine are a little bit aged and the new ones are very new (laughs).

Where do you find these vintage watches?

All over the place! Auctions, junk shops, other dealers, antique fairs… I have a big network of people who help me look for them. It’s a perennial search but it’s thrilling because they are so hard to find. I still get a kick from finding a rare, beautiful Cartier watch. We restore them in our workshops in London and give them a fresh lease of life. Some of these watches are in bad shape after 100 years, like a watch I recently bought, which had a missing winder.

Which Tank watch will you never part with?

Three years and I itch for a change, but so far, I’ve been loyal to my 1924 Tank Normale. I probably wear it half the time. Amazingly, it still runs really well. Vintage watches have to be treated with respect. I don’t know how many people have owned this, but every one of them has treasured it. These were looked after and probably handed down across generations.

Were there any interesting moments collecting these watches?

I can tell you a modern story about the Crash watch. Cartier only made about 25 between 1967 and 1987. Once I had a call from a guy who wanted two Crash watches. I thought he was out of his mind! It’s rare enough to have one, but he needed them for the most famous couple in the world. I can’t tell you who they were but you can find that out on the Internet. Anyhow, I got my friend in America to sell his 1991 Crash watch to me. I sent a guy from my office to New York to collect that watch and fly out to LA, only to find out that this very famous guy – a big recording star – was in Miami! So my guy had to fly, yet again, all the way to Miami to meet the guy in his recording studio and give him the watches.

What’s the next watch you hope to acquire?

Some watches are impossible to find. I’ve only ever owned one Cartier Tank Asymetrique and I would love to own one again. I regret selling it. I always believed I’d find another one but I never did.