The chefs who create sweet endings to a meal are finally stepping out into the limelight. 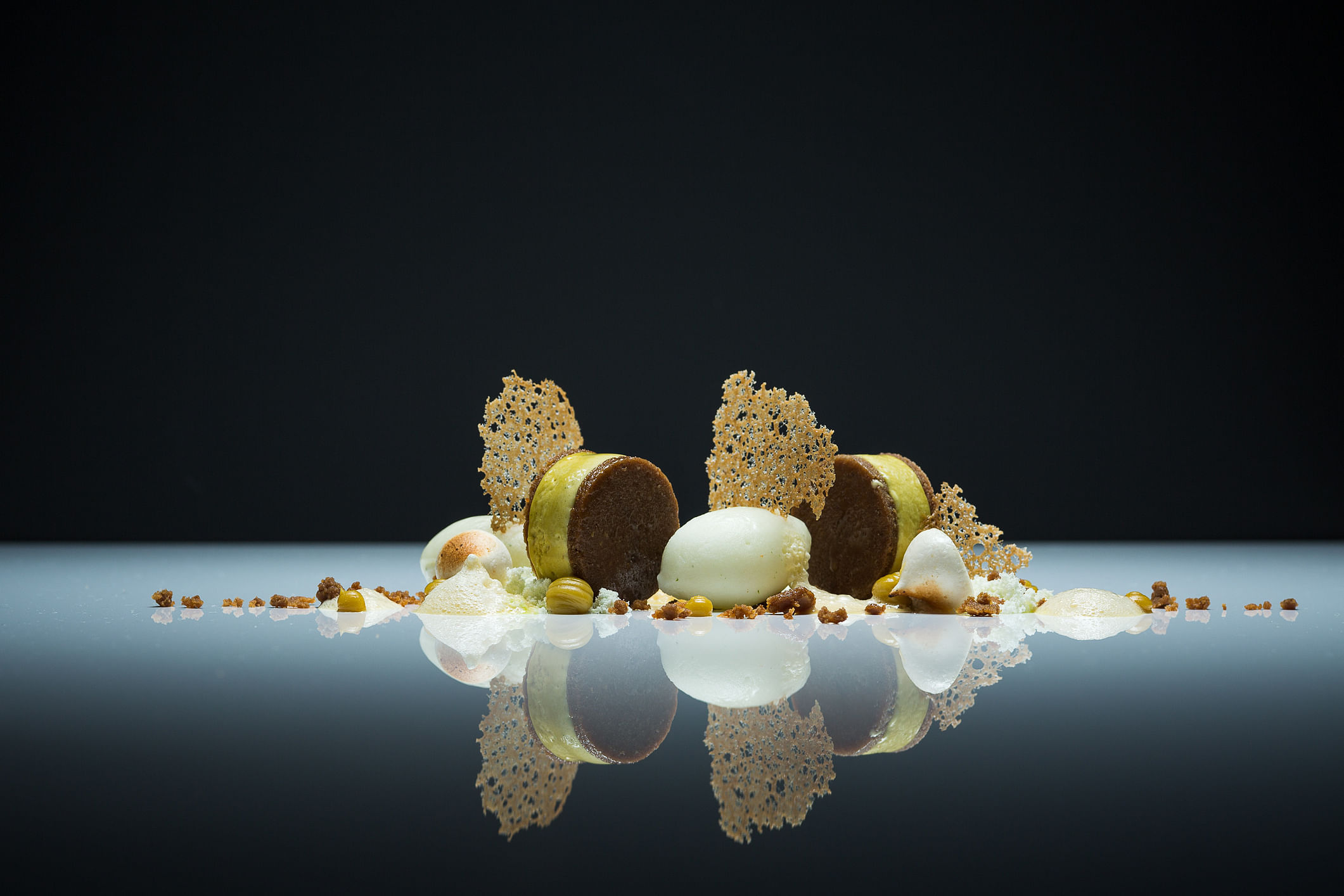 Who doesn’t like dessert? That finale of your meal, the sweet flavour that lingers on after you’re done with the main course? Of course you do. But how many even think about the pastry chef who made it – the one who is the last to leave the kitchen, the invisible face in the background as the head chef basks in the limelight?

Things have changed, and pastry chefs are now getting their due. Some have struck out on their own, while others have moved behind the scenes. There’s lots of scope for successful chefs, including patissiers, to be R&D consultants for outsourcing and manufacturing companies, and to even take on the rewarding challenge of producing their own lines of ingredients and products.

Here are four to watch:

“Chef Gael Etrillard at Raffles Hotel made me realise the potential of being a ‘creator’, using the simplest ingredients to create something that not only tastes good but is visual magic,” says Jaycent Lau of Corner House.

When Corner House first opened its doors three years ago, diners refused to end their meal without a serving of Cocoa Pebbles – a Zen-like creation dreamed up by the 32-year-old Jaycent Lau.

“My approach and philosophy is always to provide contrasts in flavours and textures,” says Lau, who reckons that working in a restaurant with newly minted Michelin credentials was also a push factor. “(Head chef) Jason Tan is one of my mentors and he inspires me to be a better pastry chef.”

After crossing the straits from Malaysia some 14 years ago, Lau honed his skills in Singapore’s gastronomic dessert sphere at leading names such as The Patissier, Antoinette, and Guy Savoy. He singles out the experience of working under chef Gael Etrillard at Raffles Hotel as particularly rewarding. “He made me realise the potential of being a ‘creator’, using the simplest ingredients to create something that not only tastes good but is visual magic.”

As dessert is typically the last item on a set menu, Lau has always grappled with the challenge of presenting a dessert that is the fitting conclusion to a fine-dining meal in terms of total concept. “My approach has evolved; I pay more attention to incorporating different taste profiles into my desserts – such as balancing sweetness with more acidic flavours – yet complementing chef Jason’s concept,” he explains.

Dessert making is particularly sensitive to global influences, where creativity is highly valued and trend spotting the norm. Having said that, Lau’s personal palate leans towards comfort foods such as tau huay and snow skin mooncake. He feels that the potential of Asian fruits and produce are not sufficiently exploited in dessert making, even though they are on par, or sometimes exceed, traditional dessert ingredients in expressiveness and flavour.

Having twice represented Singapore at the Coupe de Monde de la Patisserie (Asia Cup) and the Coupe de Monde de la Patisserie (Global Finale) between 2009 and 2012, Lau feels that Singapore is one of the best places to be for a dessert chef. “There is growing appreciation for Asian and local produce in western desserts, due to the large numbers of diners coming from different parts of the world,” he said. “On top of that, Singaporeans have become bolder in their food choices – it is a great place to create and innovate.”

Melvin Chou was trained in the hot kitchens of Royal Mail Hotel Dunkeld, Australia, and Olivia Cassivelaun Fancourt, Singapore, before joining Cure a few months ago. Andrew Walsh, Cure’s owner and head chef, saw the potential in the young chef and put him in charge of the “sweet” department, as he saw the importance of having local chefs take on heavier responsibilities in the kitchen.

Now happily ensconced at the dessert station, Chou explains his fascination with his craft. “Pastry and baking are more unforgiving, you can’t just go back and correct something like you would in other sections; and I think I have fallen in love with the unforgiving nature of it!”

One challenge for him is migrating vegetables and other ingredients from the hot section into his new realm. He’s met it head-on and even local produce has not been spared: “I’m incorporating flavours in my creations such as pandan leaves, coconut, and gula Melaka.” He also believes in “eating responsibly” and part of that ethic involves him trying to use local products obtained very close to their source, such as mangosteens and soursop.

A graduate of Shatec and Le Cordon Bleu, Chou counts among his inspirations Dan Hunter of Brae and Ben Shewry of Attica, for their advocacy of natural produce in their cuisines. In pastry and patisserie, he looks to Michael Laiskonis at ICE, Andres Lara, and Chad Robertson for creative concepts. Other challenges that fill Chou’s thoughts are creating desserts that have an impact without being too filling; and another that is key in today’s Instagram era – desserts that look picture perfect.

Jonathan Allaert’s sweet calling came through an actual accident. An accident not caused by him but rather by his mother. When she was a child, she had forgotten to turn off a gas stove that nearly caused the family house to be burned down. This developed a phobia in her and ever since then, she forbade any cooking using fire in the house unless really necessary. As the family had been in the restaurant business since his grandfather’s day, and with a close aunt who was also a great pastry chef, Allaert’s career seemed decided by fate.

He grew up watching Gordon Ramsay on television, but his mentor was Chef Stephane Berniolles of La Bodega, Paris, who taught him to “take care of people” and remain calm under stress. “I prefer classic flavours,” he declares proudly, “and I enjoy discovering ‘lost’ flavours.”
=

At the same time, his tutorship under Gordon Ramsay, Eddy Ben Ghanem, Scott Hunnel, Yannick Alleno and others also taught him the art of balancing flavours. “During the process of conceptualising, I would let my imagination take over. Sometimes nothing comes out of it; at other times the ideas flow like a running tap,” he explains.

His debut dessert at Saint Pierre impressed ardent followers of the 17-year-old restaurant – the spherical Chocolate with Passion Fruit and Ginger. “I like to explore new flavours from whichever country I’m in, and currently the tropical fruits in Singapore fascinate me,” says Allaert, counting pineapple, coconut, and ginger as his current muses.

Allaert used to be reluctant to mingle with the diners and hid in the kitchen. But chef-owner Emmanuel Stroobant would lure him into the “open” to face the customers. Initially it was a nightmare, but these days he enjoys the banter, especially during private events when he can at the same time gauge the response to his creations first hand.

The “sweet” face behind the one-star Michelin restaurant, Beni, is chef Naoyuki Tanoue. The first observation he made upon his arrival to Singapore last April was that local tolerance to sugar was generally lower than that in Japan. As his customers are well travelled and well informed about food trends, he says: “These people are food connoisseurs and so I have to make adjustments to suit their palate.”

As a six-year-old boy, he remembered his first western cake at his friend’s bakery; that was his starting point. Later he would count chef Yazuzato from Capital Tokyo Hotel, chef Narigasawa from Intercontinental, and chef Aida from Ginza Wako among his bosses and mentors. Tanoue’s approach and philosophy to his creations is deceptively simple: “To use seasonal fruits and present them as a dessert as simply as possible. The greatest joy is to see the customer’s delighted smile during and after eating my desserts.”

The former head of the dessert kitchen in Miyakojima Tokyu Resort in Okinawa, Tanoue’s Japanese background and strict training in the patisserie field is evident in each of his near-poetic creations. His approach is to conceptualise each dessert differently from the way it would be in Japan. In line with current French dining concepts, the dessert not only has to be attractive, it is also a continuation of the dishes that came earlier.

Tanoue’s favourite ingredient is raspberry, a versatile fruit that can be eaten fresh, or made into jam, puree, and jelly. “I have to take supplements to prevent tooth decay since it is impossible for me to avoid sugar,” quips the 30-something chef, flashing his white teeth.