8 Q&A with Michael Ellis: Think you can be a Michelin inspector?

The international director of Michelin Guides shares tips to be a Michelin Inspector, the aftermath of Bib Gourmand Singapore, and what to expect at the hotly-anticipated launch of Michelin Guide Singapore 2016 tonight. 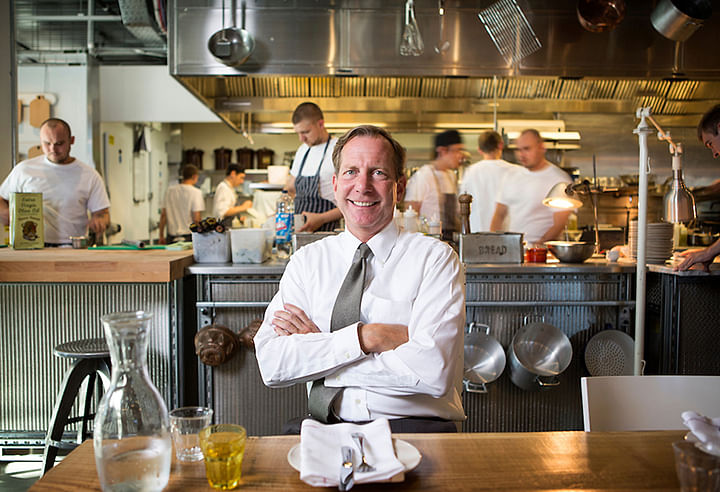 [dropcap size=small]S[/dropcap]eated on a sofa in the Capricorn room of Resorts World Convention Centre, Michael Ellis looks surprisingly relaxed for a man running on a minute-by-minute schedule. It’s the first time Michelin is combining the awards ceremony with the gala dinner – usually a press conference is held before the dinner starts at night – and Ellis stayed up late last night to ensure rehearsals for the launch of Singapore’s inaugural Michelin Guide goes smoothly.

The Peak speaks to him before tonight’s big reveal of Singapore restaurants to be awarded Michelin stars.

1)     What does an international director of Michelin Guides do?

My role covers three areas. First, overseeing the activities of the inspectors and making sure they are motivated and have the resources to do their jobs. I get together with the team several times a year to decide on what the next edition of the Michelin guide will look like.I also maintain relationships with the chef community. At Michelin, we like to have an open dialogue with the chefs and maintain a certain transparency so the chefs understand what inspectors are looking for and understand our decisions.

The third area is press relationships – making sure we get the message of Michelin out.

2)     Michelin is the apex of fine dining. How have you honed your palate for this job?

I grew up in Denver, Colorado in the 1960s, and in those days, the US was a meat and potatoes kind of country. My first real exposure to French food was during my 10th-grade class excursion to Europe, where I saw mussels for the first time. You remember your first meal; it marks you.

Now, being exposed to sushi in Japan, pasta in Italy, fishball noodles and laksa in Singapore gives me a better understanding and knowledge to what these cuisines are about. And no, I’ve not tried durian yet, but it’s on my list.

3)     You say you discover new cuisines when you dine with Michelin inspectors for work. How do the inspectors remain anonymous when someone as well-known as you are with them?

It depends. For example, I would not go into a Michelin starred-restaurant in France with an inspector for a meal. I would be recognised. But if I am going into a ramen noodle house, or a sushi bar in Tokyo, that’s usually not a problem. Singapore will be a challenge, though, so I won’t do it.

Usually, our inspectors make reservations under pseudo names, and they are very much under the radar. Even if they present themselves, which they sometimes do, they will never go back to that restaurant or that part of the country for many years. If the inspector does introduce himself to the restaurant, he will not have a conversation with the chef about what he (the inspector) ate that day. It’s more to inspect the kitchen and just talk in general about the business and establish a dialogue with the chef. By the time the chef is able to guess what’s going on, it’s already towards the tail-end of the selection.

4)     Many of our readers are well-travelled and have dined at many Michelin-starred establishments. Would they qualify to be Michelin inspectors?

Being an inspector is really a unique job. As far as I know, no one else in the world has this type of position.

Inspectors eat between 250 and 350 meals a year. They are on the road five days a week eating lunch and dinner usually by themselves, usually away from home. It’s a difficult job, and you also need to have a unique palate. All our inspectors must be able to taste food profoundly and also write about it; communicate what they are tasting and then explain that clearly in writing.

The vast majority of our inspectors has gone to either cooking or hotel schools, and many have worked with chefs and sommeliers. Almost all have F&B or hospitality backgrounds. It’s very rare that we have inspectors from other sectors. So, no, I think just because someone has gone to 300 Michelin-starred restaurants in a year, that is just not sufficient experience to be an inspector.

5)     In the recent Bib Gourmand Singapore awards, some people have commented that having tried certain restaurants on the list, the total bill came up to more than S$45 a head (To qualify for Bib Gourmand, restaurants must serve a good meal below $45/pax). Your thoughts on this?

It really depends on what an individual orders. It was not an easy thing for us, but we think the average inspector – we are excluding wine and beer– will basically have a set plate, or a first and second course, and maybe a bottle of water. If you want to do the add-ons, it could go past the limits, but our inspectors have found they could eat within the range pretty successfully. The cap of $45 doesn’t include drinks, only food.

6)     Were any of the inspectors for this guide from Singapore?

7)     In your position, you will be at the forefront of food trends. Where do you see it going?

I think people in many countries are going back to product-driven cuisine, where it’s all about the product. You go to places around the world, and you’ll see on the menu: “monkfish, ricotta, and strawberry.” Or, it will say, “veal, rhubarb and leek.” They won’t even tell you how it’s cooked. They’ll just talk about what’s in there.

You can expect…(dramatic pause) a lot of excitement! (laughs). I think there will be some surprises, pleasant ones, in spite of all the predictions going on.