All you need to know about uni, the latest food craze in Singapore

Uni is fast gaining devotees in Singapore. Here’s what you should know. 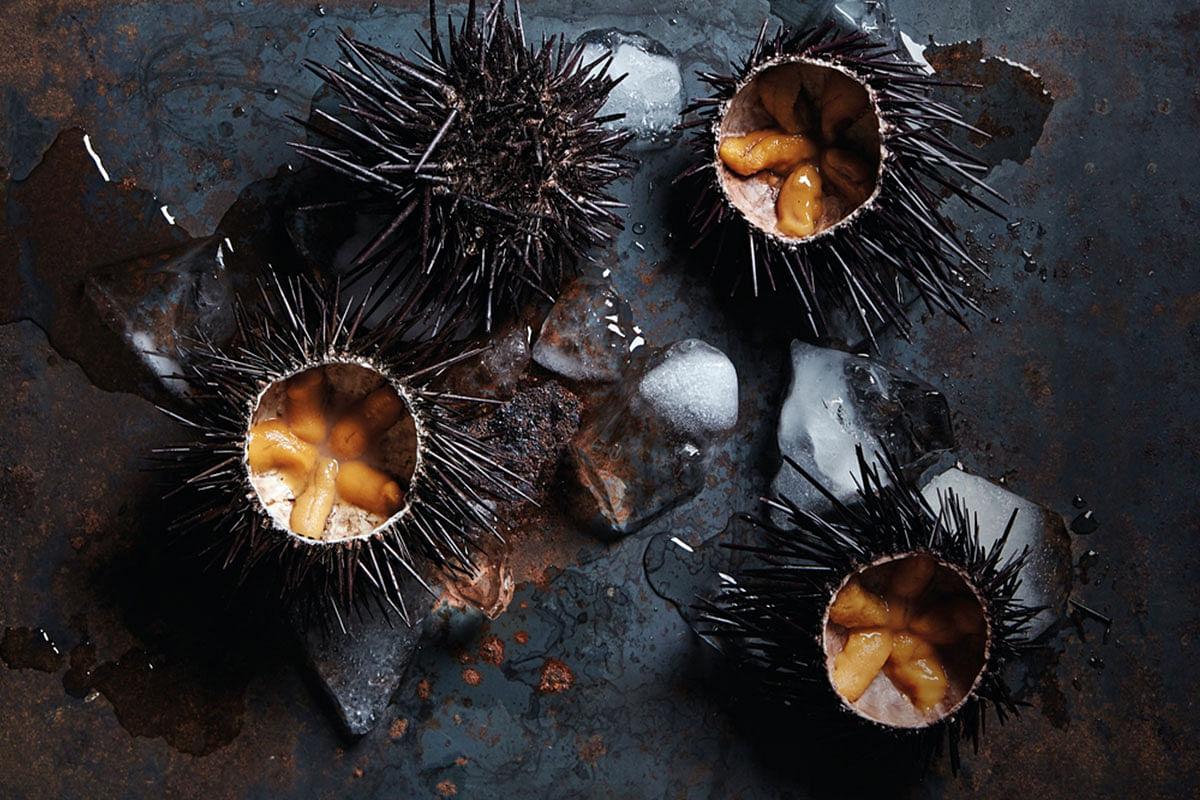 [dropcap size=small]C[/dropcap]ertain gourmet foods inspire cult-like devotion. There’s wagyu, where the cows are fed a special diet and purportedly given massages to Mozart’s music. Then, there’s sea urchin. In some parts of South Korea, haenyo (sea women) train from young to free-dive in icy waters with nothing more than a mask and knife to gather the spiky orbs from the seabed.

The glistening golden cream – technically the animal’s gonads – encased within is an acquired taste, much like that of durian. But serious uni lovers will know that getting top quality “custard” – delicate in flavour and texture – is no easy feat. For starters, only 18 of the world’s over 100 varieties are edible. The sweltering humidity of Singapore also turns the cream into a bitter, watery mess. Freezing the pieces, on the other hand, will strip them of flavour and body, leaving them only good for topping on chawanmushi or as a sauce.

This is why most uni here are from Japan – bafun and aka being the favourites – as Mediterranean varieties are harder to keep in tip-top condition due to the longer transport duration.

“Flavour-wise, Japanese uni tends to be smoother and more subtle in flavour, which sits well with local palates,” says Beppe De Vito, restaurateur of the Illido Group. Though his restaurant Braci serves modern Italian cuisine, De Vito uses mostly Japanese sea urchins on his menu. “Sea urchins from Italy tend to be saltier, and is logistically more challenging to bring in.”

Chef Han Li Guang from Restaurant Labyrinth prefers those from Canada for making sauces. “Fresh Japanese uni should always be served raw or lightly torched, but Canadian uni is good in sauces because it is slightly sweeter and lacks the depth of Japanese types,” says Han.

Here, we break down what makes uni so delectable.

How can you tell if uni is fresh?

When it keeps its shape and isn’t mushy. Fresh uni should be soft and melt in your mouth, but still have a bit of bite.

In the fridge. For consumption as sashimi, it is best to finish it in two days upon receipt. After which, you may keep it for up to five days to cook with pasta or use as chawanmushi topping. 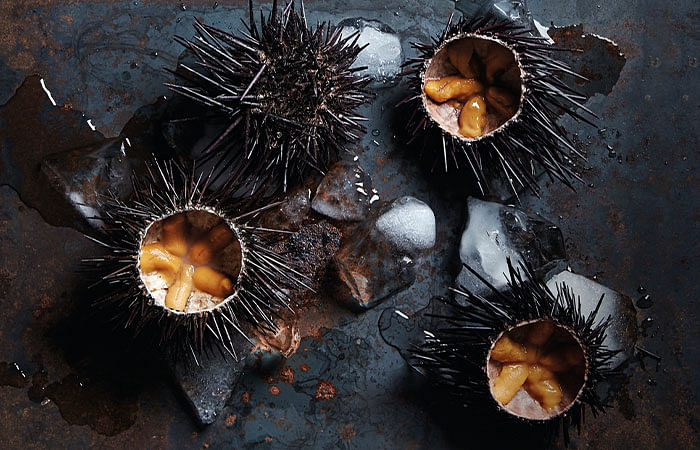 Are live sea urchins better than boxed ones?

Not necessarily. Live sea urchins will have roe of different sizes. It’s important to understand how boxed uni comes about – live sea urchins are opened, cleaned, then segmented into different grades. The ones of better grades make it into a box. The rest will go into stuff like neri uni (a paste) or simply sold for cheaper.

Bafun and Aka Uni are commonly served at sushi restaurants. Are there lesser-known types that are just as good?

Ensui uni. Chefs don’t use it in Singapore, but in Japan, it is served at high-end places. The uni is kept in a saltwater solution that mimics the salt levels of the sea where it’s from, so this is the best way to enjoy the natural sweetness of uni.

We find out how sea urchins from around the world measure up against their more popular Japanese counterparts. 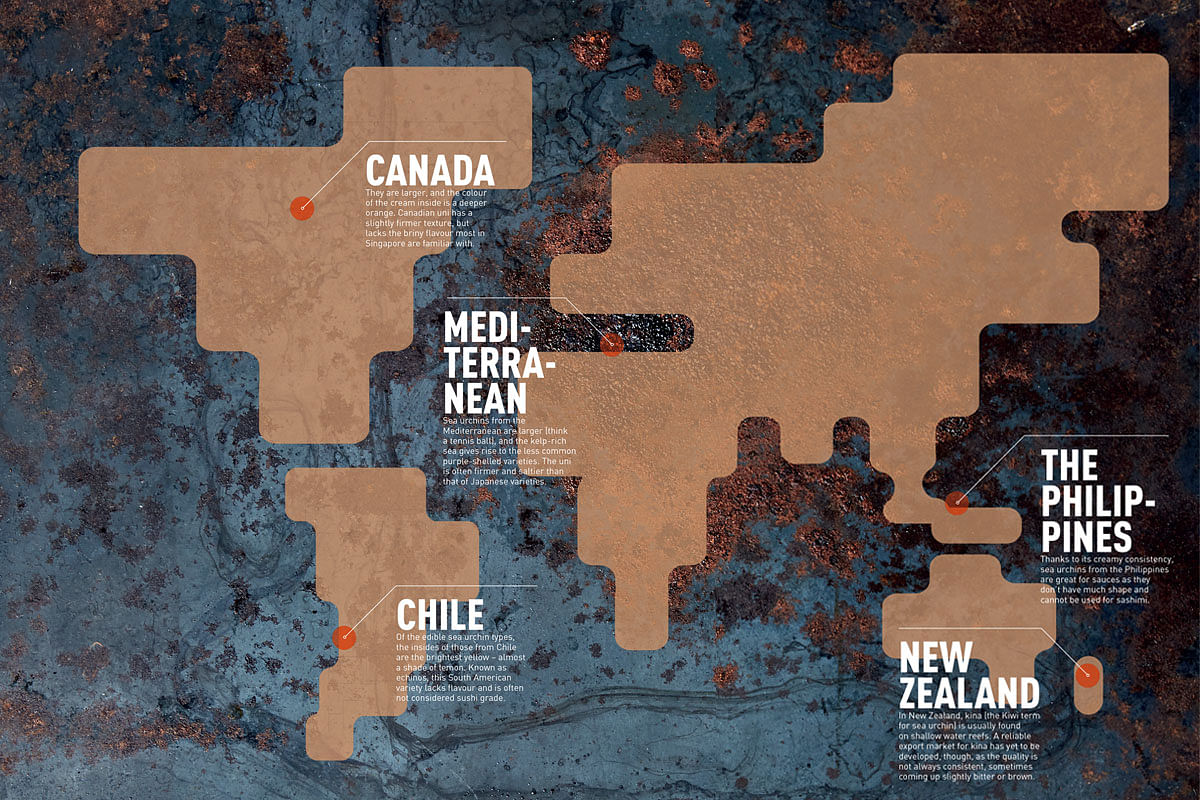 They are larger, and the colour of the cream inside is a deeper orange. Canadian uni has a slightly firmer texture, but lacks the briny flavour most in Singapore are familiar with.

Sea urchins from the Mediterranean are larger (think a tennis ball), and the kelp-rich sea gives rise to the less common purple-shelled varieties. The uni is often firmer and saltier than that of Japanese varieties.

Of the edible sea urchin types, the insides of those from Chile are the brightest yellow – almost a shade of lemon. Known as echinos, this South American variety lacks flavour and is often not considered sushi grade.

Thanks to its creamy consistency, sea urchins from the Philippines are great for sauces as they don’t have much shape and cannot be used for sashimi.

In New Zealand, kina (the Kiwi term for sea urchin) is usually found on shallow water reefs. A reliable export market for kina has yet to be developed, though, as the quality is not always consistent, sometimes coming up slightly bitter or brown.

A quick look at different grades of uni based on their colour and texture.

[dropcap size=small]A[/dropcap] The highest grade of uni. Usually a vibrant gold with firm texture. Taste-wise, this is usually the sweetest.

[dropcap size=small]B[/dropcap] Second-grade uni tends to be muted yellow in colour, and has a mushier texture. It is also less sweet than A.

[dropcap size=small]C[/dropcap] Referred to as vana, these are the leftover bits that get broken up during the processing and handling of sea urchins.

We suss out some of the best sea urchin dishes beyond the standard sushi.