Even cocktails can do with a little wood and age. 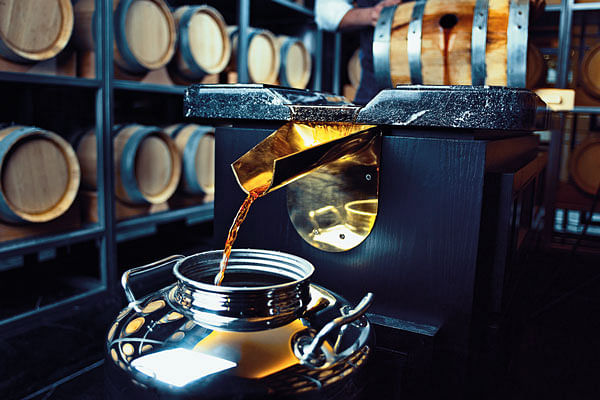 Most of us think of barrels as containers of pre-bottled goodness. In a barrel, time and wood turn grapes into wine and barley into whisky. But barrels can also be used to transform finished products. An increasing number of bars here are offering barrel-aged cocktails, and you need one in your hand right now.

Because ageing a cocktail isn’t going to take several years or decades – in fact, it can take just up to a month – the flavours imparted will be subtler.

One method is solera ageing, which was traditionally used for sherry port and involves blending a fraction of the liquid from the oldest barrel with the youngest. The Regent Singapore’s new Manhattan bar houses the world’s first in-hotel rick house (basically, a barrel storeroom) and, when available, it serves solera-aged Negronis. “The barrel gives the cocktail time to relax and really blend, as well as giving a hint of wood to each drink,” explains Manhattan head bartender Ricky Paiva.

By nature of its constant blending, solera ageing ensures a more consistent product, and bars like The Spiffy Dapper also have a cask or two holding resting concoctions. But single-cask ageing yields more interesting results.

“I like the individuality of a single barrel because that one expression you get can never be perfectly replicated – it’s unique and special,” says Michael Callahan, founding bartender of 28 Hongkong Street, which is known for its aged Negronis and Viuex Carres. The bar and grill Burnt Ends recently launched a “guest barrel” programme, where guest bartenders come to fill their own barrels and release one-off creations.

Callahan initially offered more than 20 barrels at 28 Hongkong Street, but has slowed that down to just one to three barrels at hand, with new ones released only occasionally.

The main reason is that this is a big commitment and shouldn’t be used as a casual marketing tool. “Too often, bars will get a free barrel from someone and throw any old classic in there, just so they can say they have an in-house barrel-ageing programme,” says Callahan.

“Barrel monitoring is almost a job in and of itself, and, if you don’t plan on developing your aged cocktail to become something greater than the sum of its parts, then perhaps you should reconsider doing it at all.”