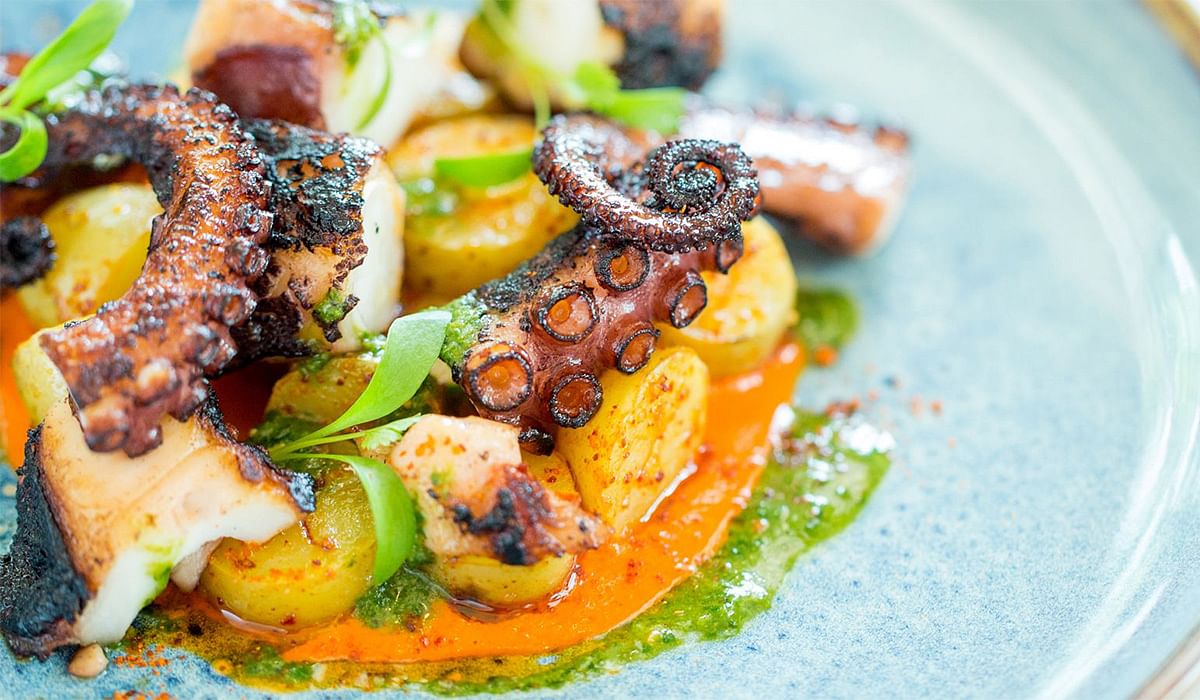 BBR by Alain Ducasse. It could be XYZ, ABC or UMMGNOOF – it doesn’t matter what letters they put in front, because people will only see two words: Alain Ducasse. He is THE MAN after all. So if you have no emotional connection to Raffles Hotel’s original Bar and Billiard Room – which Monsieur D has reincarnated in his own restaurant image – then the BBR acronym just means more to type.

There’s a clubby, no-nonsense feel about BBR by Alain Ducasse, as if designed by one who responds to the floral femininity of La Dame de Pic and whimsical fantasy of yì by Jereme Leung with a massive eye roll. For them, visual wow comes from bold statements. Like its stunning open kitchen that spans half the length of the restaurant and ends in a hulking metal and brass centerpiece suspended from the ceiling, like a giant salamander keeping the chefs below it warm. If you look up and peer at the underside of the circular feature, you can vaguely make out a map of the Mediterranean etched into the brass surface.

That map sets the tone of the menu which roughly covers the regional foods of France, Spain, Italy and Portugal. It’s reflected in the colour scheme too – with its burnt orange furniture and matching terrazzo-patterned tables.

The stunning open kitchen that spans half the length of the restaurant and ends in a hulking metal and brass centerpiece suspended from the ceiling, like a giant salamander keeping the chefs below it warm.

A Margarita pizzetta, a thin pizza with surprising heft, is a worthy bite.

Perfectly pink lamb in a salty but well-rounded sauce of black olives and anchovies.

Churros – a mugful of airy, crisp-tender corrugated pastry nuggets deep-fried into little mouthfuls of bliss and dipped into a Nutella-like chocolate sauce.

The staff seem to have the fear of Alain Ducasse (who was here personally for the opening) burnished into their souls – service is slightly skittish albeit friendly, and rather raw, but it’s not for lack of trying.

But the peril of attending a media preview a couple of weeks before is that we are recognised, which means we get a little more attention and a visit by head chef Louis Pacquelin, who comes with a gift of Spanish salted cod fritters (S$15). Which we shamelessly relish because they are really quite good. There’s some serious crunch in the light, deep-fried crust of these creamy mashed potato and salt cod balls that are quite different from the more familiar bechamel-based croquetas. They come with a punchy, smoky-spicy, pimento and paprika-enhanced sauce that’s got a long, deep finish.

We reckon it isn’t likely for us to get better food than other guests in this context given the kind of cooking involved – how do you fiddle with a fritter? – and besides, the freebie stopped there.

The Galician classic Pulpo a la Gallega (S$28) doesn’t have the resilient bite we prefer, but the octopus is fork tender, paired with requisite waxy baby potatoes dusted with smoky paprika and olive oil – it should stop there but a rich, mild sweet-spicy red pepper (piquillo) adds to the mix.

Fluffy, soft olive focaccia is put to good use in the sautéed clams (S$28) slicked generously with a robust emulsification of lemon, olive oil, garlic and plenty of parsley that gets the full blast of umami from the shellfish juices. The sauce can get a little too in your face like the credit card promoter lurking at the cash tills in select NTUCs, but in this case, it’s forgivable.

After all, it goes with the territory because this isn’t the salad, olive oil, fresh fruit and vegetables definition of the Mediterranean diet. This is full on, traditional cooking, with a European authenticity that hasn’t been adapted to Asian palates (although they may have adjusted the salt content somewhat), so how you respond to it is purely personal taste. A Margarita pizzetta (S$15) is a thin pizza with surprising heft. You expect it to be some kind of flatbread or crispy wafer but it actually packs a doughy resilience in its skinny self. It barely holds up the overly thick layer of tomato purée smeared over it and deliciously chewy mozzarella but it’s still a worthy bite. Imagine what they can do with a bit more dough and that cool fiery oven they have.

(RELATED: Where to eat at Raffles Hotel Singapore)

Things start to get intense with the Cataplana Marisco or Carabinero shrimp and shellfish stew (steeply priced at S$60) – a super potent Spanish suquet (a tomato-saffron shellfish stock reduction) filled with fish, mussels and a solitary vibrant red prawn sitting on top as a justification of the price tag. Yes, it’s sweet and juicy and the mussels are fresh – but eating it is as intense as sparring with a combative Catalan.

We like the lamb though (S$53) – perfectly pink roasted meat in a salty but well-rounded sauce of black olives and anchovies that’s a new flavour profile for us and a welcome discovery. If you need carbs, thick fingers of chickpea fries (S$9) shaped from creamy hummus enclosed in crunchy armour.

No matter how stuffed we are by then, we magically expand to inhale the addictive churros (S$9) – a mugful of airy, crisp-tender corrugated pastry nuggets deep-fried into little mouthfuls of bliss and dipped into a Nutella-like chocolate sauce. Or you could make short work of the S$18 brandy baba (as opposed to rum) – a light brioche-textured sponge cake drizzled with a few drops of brandy. A large dollop of Chantilly cream makes this a treat.

It ain’t fine dining in the style of Plaza Athenee or Hotel Meurice, but it’s solid, casual fare deftly executed by Ducasse protege Chef Pacquelin. It’s still rough around the edges but with a fundamentally sound product backed by he-who-must-be-named, it’s a no-brainer.