Chefs Pang Kok Keong and Jeremy Nguee get in touch with their heritage to offer honest-to-goodness cooking. 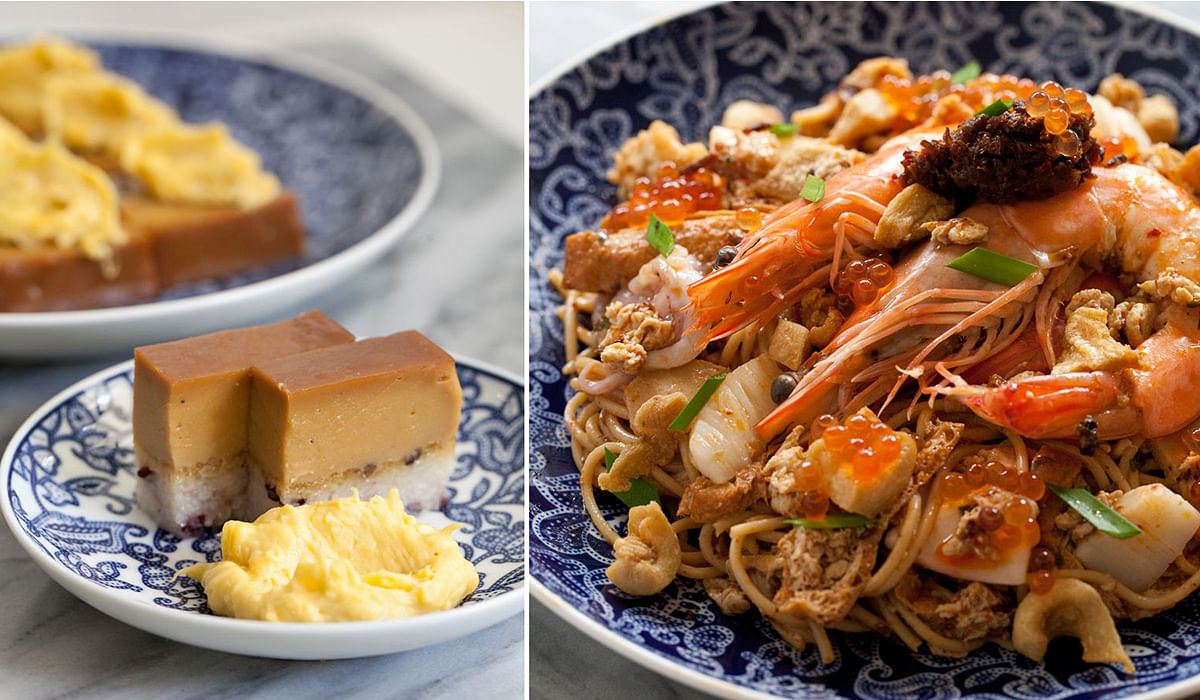 The floodgates may be open but it doesn’t mean that you have to go with the flow. So say those of our ilk – the ones with “Stuck Home” syndrome who can’t look at the human floods streaming through public spaces without images of “second wave” hacking through our heads.

While our numbers are dwindling – along with our food choices as most restaurants dial down their delivery options – there are thankfully those devoted to providing you a meal that tastes good regardless of whose dining room it’s served in.

One of them is boutique caterer Preparazzi owner Jeremy Nguee, whose event business nosedived during the pandemic and led him to switch to a pop-up takeaway wistfully named Dream Shop. That and his immensely popular Kueh Salat business Mrs Kueh – named for his mother and her recipe – have enjoyed solid social media stardom for his Insta-friendly, upscale interpretations of hawker food.

With his S$60 Dream Hokkien Mee as his calling card when he first launched, he’s since come slightly more down-to-earth with a small, thoughtfully chosen repertoire of family-centric meals that are big on flavour and in portion.

In place of Hokkien mee he now has Dry Laksa (S$36) – thick noodles given a good fry up with coconut milk-enriched dried shrimp rempah and minced herbs, giving you all the flavour of laksa without the risk of gravy stains on your shirt. A bit more heat and assertiveness in the sambal would have given it more character but otherwise it’s perfectly agreeable as is. Little nuggets of Hokkaido scallop and generous firm, largish prawns help to justify the premium pricing.

Firm-textured prawns – after numerous takeaways with specimens in varying degrees of mushiness – are a plus point for Dream Shop. Especially with the deep fried ngoh hiang (S$12) where its prawn star is wrapped in a coat of five spice-enhanced minced meat and beancurd skin. It’s rather salty, but it has all the makings of a proper fritter, although it would be better off left whole instead of precut and stuffed unceremoniously into a paper cup. Sweet sauce and a chilli dip to accompany it would be nice too.

Buah Keluak Beef Rice Bowl (S$38) takes the best of buah keluak fried rice and Japanese steak rice bowl in one satisfying dish for the indecisive. The rice isn’t fried per se but cooked in a mild buah keluak paste that has enough hint of Indonesian black nut without being overly dominant. Thick slices of coffee-crusted Angus steak top it off, along with a runny soft boiled egg. And just so you don’t keel over from the richness of it all, pickled onions and a marinated oba leaf (tread carefully with the oba which is the ninja of pickles that attacks you when you least expect it) pull you back from the brink.

On the other hand, the hyped up caramelised honey char siew (S$33) appears as two large slabs of Canadian pork belly that have a sufficiently charred exterior but all of its signature syrupy savoury glaze stays on the surface instead of seeping through the meat. So it’s not char siew per se but more like pork belly playing an unconvincing role. It’s too bad because the pork itself is meaty and nicely marbled. While it’s not perfect, Dream Shop has its heart and cooking techniques in the right place, and the fact that it doesn’t stint on its ingredient quality proves it too.

While it would have been good to end on a sweet note, unfortunately, the famed gula melaka kueh salat with durian is in such hot demand that we’re not able to get our hands on any. So we can only, well, dream about that for now.

Meanwhile, you’ve no doubt heard the news that Antoinette will close its entire operations by the end of this month and with that, so too will chef-owner Pang Kok Keong’s Hakka Pang Delicacies – his personal tribute to the food he grew up with. This takeaway-only option is an authentic peek into the food of a dialect group that itself is divided into many sub-dialects with their own unique specialities.

Even other Hakkas wouldn’t be too familiar with Chef Pang’s creations, but all would agree that he is the Master Q of textures, especially when it comes to the chewy, resilience of his Hakka Noodles (S$16). This deceptively simple dish is made up of noodles made to his own recipe that you boil at home and dress up in fragrant lard and sauteed minced pork for a meal that needs nothing else.

If you want to push the limits, there is thunder tea rice (S$8 a set) which really splits people down the middle between “like” and “don’t like”. If you like it it’s a textural mixture of brown rice, peanuts, herbs, vegetables and dried anchovies over which you pour an emerald green herb paste mixed with hot water like a green soup (some versions use actual tea but not this one). But if you’re in the ‘don’t like’ camp, this is an acquired taste.

But since chewiness is a universal joy, Chef Pang’s got that down pat with savoury abacus seeds ($31/kg) tossed in a garlicky dried prawn mixture, or slippery radish balls (S$8) of shiny glutinous skins wrapped around a turnip, pork and dried shrimp mixture.

There’s still a bit of time to savour these heritage nuggets, after which we’ll have to wait for him to open his new Hakka noodle stall, when the likes of yong tau foo and a new gourmet journey await.

(Related: Krug explores the onion with their single ingredient programme)