Which cities are Asia’s 2017 dining hotspots, according to the Asia’s 50 Best?

Watch out, Tokyo, Hong Kong and Singapore. According to the recent Asia’s 50 Best Restaurants list, Seoul, Bangkok and Taipei are quickly stepping up as the region’s next hottest dining destinations. 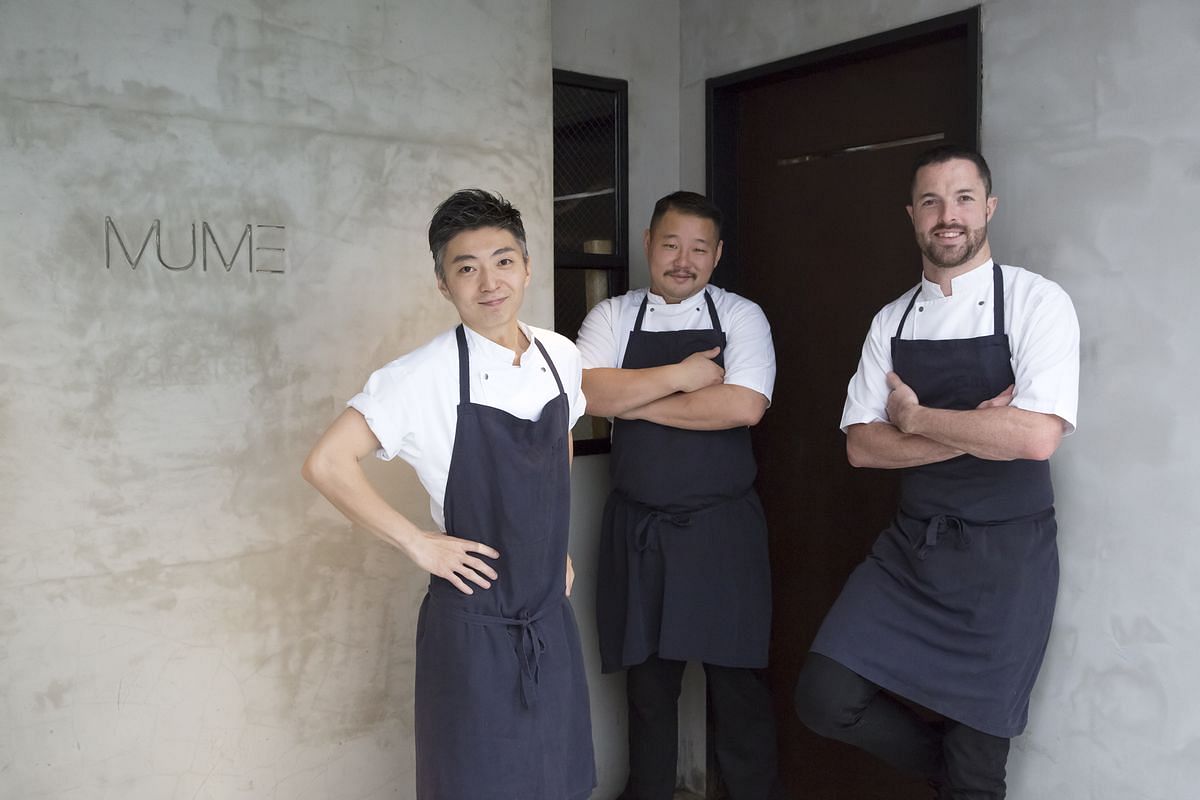 [dropcap size=small]D[/dropcap]oenjang, gochujang and ganjang – if you don’t know these terms already, pen them into your culinary glossary immediately. For the explosion of interest in K-pop, K-drama and K-everything else over the last decade has now spilt over to food, giving Korean cuisine a long overdue nudge onto the global stage, say Seoul’s top chefs and food critics.

Last November, the South Korean capital city piqued the interest of global gourmands with the launch of the inaugural Michelin Guide Seoul, elevating the city into the same league as long-established dining destinations such as Paris, New York and Tokyo. A further three Korean restaurants were feted in the 2017 Asia’s 50 Best Restaurants List released last month, while a fourth, TocToc, was highlighted as the One to Watch.

“Korean food was always under-represented and there is a common misconception that Korean food only has pungent, heavy flavours,” observes head chef Kim Sung Il of La Yeon, one of the city’s two three-Michelin-starred restaurants, which climbed up from 50th to 38th position on the Asia’s 50 Best Restaurants list this year. “In Korea, family meals are sacred and meticulously prepared, and food is a very central part of our livelihood. We have amazing festivities that revolve around food – and this resonates with people from all cultures.”

And visitors are finding much more to talk about than just kimchi. From the age-old technique of fermentation to essential pastes (such as the aforementioned doenjang, gochujang and ganjang – bean paste, red chilli paste and soy sauce, respectively), diners and local chefs alike are “slowing moving away from the stereotype where Korean food is only associated with grilling and barbecuing, and seeing a bigger focus on our culinary roots,” he adds.

It helps, too, that burgeoning demand is supported by bountiful supply, thanks to the country’s robust agricultural sector. “We produce a lot of what we eat and it’s all very seasonal. As a peninsula, we are also surrounded by seas, so we also have access to an interesting variety of seafood that is exclusive to the region,” says Kim, who uses 100 per cent of homegrown products and draws on ancient Korean recipes in La Yeon.

For chef Kim Dae Chun of Toc Toc, South Korea’s dynamic food culture has always spanned street food to multicultural cuisine, and standards are at an all-time high. The young drummer-turned-chef recently returned from culinary training in Japan to set up his modern Korean eatery in Seoul, where he fuses Italian, French and Japanese cooking techniques with local seafood.

“The basic characteristic of Korean food is diversity. Young chefs are adding their new perspectives and ideas, and the new generation of young foodies are open minded to changes,” agrees chef Mingoo Kang of Mingles, ranked 15th on the Asia’s 50 Best list this year.

La Yeon’s chef Kim concurs: “Although I’ve been a chef for almost 30 years, I’m still discovering new ways with food, and a good part of the process is about listening to what other people think is Korean food, and to find something new in the old.”

Taiwanese chef Andre Chiang may have helped to put Singapore firmly on the global culinary map, but he’s just as proud that his native Taiwan is now stepping into the limelight.

“I think it’s about time. Among all the Asian countries, from Japan to Korea, China, Thailand, and Vietnam, no one has really talked about Taiwan,” says Chiang, whose Taipei restaurant Raw by Andre catapulted from 42nd to 24th place on the Asia’s 50 Best Restaurants list this year. “From the people, to the hospitality, the landscape and the produce – we have it all.”

(RELATED: Andre Chiang took over G&T for one issue as Guest Editor – all you need to know about the man is here.)

In total, there were three Taiwanese restaurants on the rankings this year, including Le Mout by Chen Lanshu, named Asia’s Best Female Chef for 2014 by the Asia’s 50 Best Restaurants academy, and newcomers Mume, a modern restaurant centred on Taiwanese ingredients.

The latter, incidentally, was set up by three non-Taiwanese – Hong Kong-born Richie Lin, American Long Xiong and Australian Kai Ward – all so enraptured by the territory’s many draws that they left stints in feted restaurants such as Copenhagen’s Noma and Sydney’s Quay in 2015 to set down new roots in Taiwan.

“I don’t think Taiwan is suddenly starting to be good. It’s always been good and people are now just realising it,” says Ward. “Given its proximity to Hong Kong or Shanghai and other options around, travellers have tended to overlook Taiwan. But people are always looking for the next new thing, and Taiwan, at the same time, has expanded its dining options beyond street food in the last few years.”

Subtropical climes and warm ocean currents make historically agrarian Taiwan all the more conducive to the growth of lush vegetation and two or three rice harvests per year.

“As an island, there are a lot of fruit and vegetables that you can’t get elsewhere,” says Xiong. Citing this year’s number one-ranked restaurant Gaggan as an example, he adds: “In Bangkok, you see chefs not from there doing interesting things that are not specifically Thai. This could be a direction that Taiwan will grow in, where people bring in interesting ideas that are not necessarily Taiwanese cuisine, but using all the products that Taiwan has to offer – exposing the world to Taiwan and Taiwan to the world.”

Diners have even more reason to smile in the Land of Smiles. Long a destination for its street eats, Bangkok’s fine dining scene has undergone a recent renaissance, and can be said to now stand shoulder to shoulder with other popular Asian cities.

Four of the 10 new restaurants on the Asia’s 50 Best Restaurants list this year are found in the Thai capital. Bangkok-based progressive Indian restaurant Gaggan holds the top spot on the list for the third year running and Thailand is now home to nine listed restaurants – the same number as that of popular frontrunners such as Japan, China and Singapore. With murmurings of the Michelin Guide unveiling a Bangkok edition growing stronger by the day, the stream of foodies channeling into the city will only grow, say observers.

“Bangkok is a travel hub for the region so people have always stopped here and are always looking for good food,” says Dylan Jones, co-owner of Bo.lan, a new entrant on the Asia’s 50 Best Restaurant rankings this year. But over the last five to 10 years in particular, he’s seen gourmands increasingly divert from glitzy hotel restaurants to small, owner-operated establishments.

Jones chalks the restaurant boom down to better access to quality produce – both local and imported – and the wider pool of foreign talent that has been lured to Bangkok, as well as local talent that have returned home after cutting their teeth in leading restaurants overseas. “The overall consciousness of what good food has grown substantially,” he says.

“Customers in Bangkok are very much open to new concepts,” says German-born twin brothers Mathias and Thomas Suhring. After cooking at Lebua for eight years, the brothers decided to remain in Bangkok to set up their maiden independent venture, contemporary German restaurant Suhring, which made it onto the Asia’s 50 Best Restaurant list in 13th place after just a year of operations. “When we arrived in 2009, finding the good products was a challenge. Now we discover great new local products from boutique farmers all the time,” they share.

“Tourists to Bangkok may know us for our pad thai, som tum and tom yum goong, but we are working very hard in order to level up the gastronomic cuisine of Thailand. We have so many other varieties of Thai food and also international cuisine,” says Thai tourism minister Kobkarn Wattanavrangkul, citing The Royal Project – a movement started by the late Thai King to connect rural Thai farmers with urban demand – as an initiative edging the restaurant industry forward.

But the support must go both ways, adds young Thai chef Thitid Tassanakajohn. The menus at his casual restaurant Baan and its fine dining sister outlet Le Du (which debuted at 37th place on the 2017 list) bear short write-ups on the local farmers he works with. “Five years ago, no one paid farmers a lot of money: chicken is chicken, pork is pork and beef is beef. But when people realise that there are things like free-range and antibiotic-free meats, and are willing to spend, then restaurants can continue to support these farmers.”

Still, some chefs are cautious about having too much of a good thing. “Honestly, I’d like to see the growth of the restaurant scene slow down a little, with more focus on quality and consistency as opposed to ‘bigger, faster and flashier’,” says Jones. Seeing more local chefs cook local food and more regard for the environment are two other points on his wishlist.

As to whether Bangkok will soon outshine other Asian cities as the premiere stop on any regional food trail, Jones counters: “I don’t really think we should be looking at our food scenes as being in competition. These days there is a real community spirit in the food industry and we can all work together with the common goal of constantly trying to improve the quality on offer and towards reducing our impact on the environment globally.”

“That said, it all starts locally,” he adds.