We find out how the world’s most influential chef interprets Australian produce. 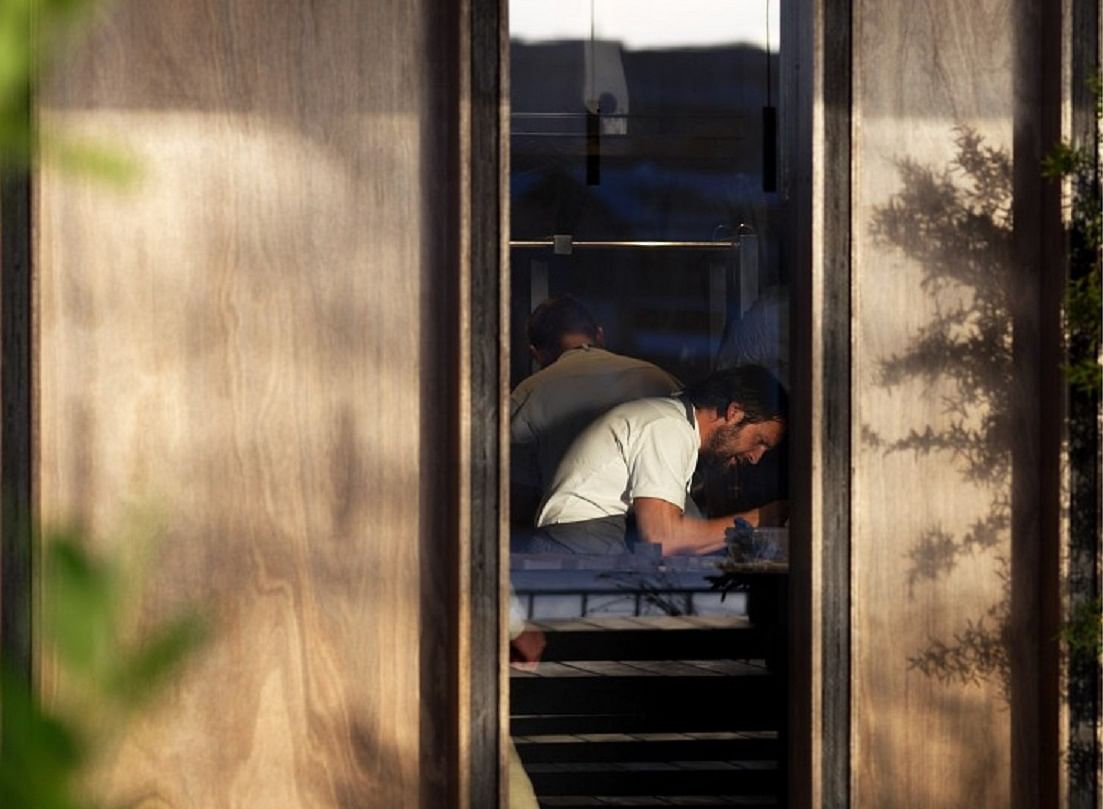 [dropcap size=small]O[/dropcap]n Mar 3, more than 30 journalists from around the world alongside a dozen celebrity chefs, including Neil Perry, Kylie Kwong and Luke Mangan, set foot on Sydney’s new Barangaroo harbourfront enclave. All were prepped for an unforgettable evening of wining and dining – not at any average restaurant, but at the one and only Noma Australia.

The rather stark dining space overlooks the sparkling waters of Darling Harbour. But we are not here for the view tonight. The highlight is the 12-course menu that Rene Redzepi, Noma’s chef-owner, has fastidiously curated for his guests. Back home in Copenhagen, Noma (regularly awarded as the world’s best restaurant) is most famed for weaving foraged ingredients into its unique cuisine. In its temporary Southern Hemisphere outpost, the spotlight shines on a host of indigenous ingredients from the Australian terroir.

Redzepi, often dubbed the earth’s most influential chef, leads his brigade of chefs in the sizeable open kitchen. It’s a well-oiled machine run by a multi-cultural “family”. In fact, Noma’s staff, about 70 of them, along with 30 of their family members arrived on Australia’s shores in January for this 10-week residency. Redzepi himself brought his wife and three young daughters. This is Noma’s second temporary relocation, after its wildly successful pop-up in Tokyo last year.

Redzepi has come to this antipodean terrain to forage not just for native ingredients but also for culinary inspiration. Along with his Australian-based forager Elijah (EJ) Holland, a 23-year-old chef, they gather all manner of wild edibles in the bush and along the coast for the AU$485 per person menu.

Some might think that Redzepi is a bit of a mad man (quick trivia: ‘mad’ means food in Danish). But is he? When you understand his thinking behind the dishes, you’ll realise that it’s a tribute to the aboriginal people he’d met earlier in Arnhem Land, one of the five regions in the Northern Territory. To him, it has been a fruitful learning process. “Spending time with indigenous communities in places like Arnhem Land has left the biggest impact on me and the Noma team,” he shares. Besides bush tucker, many of the courses feature coastal ingredients in their most unadulterated state. “The seafood here is so pristine that we’ve had almost too much to choose from,” adds Redzepi.

A well-paced succession of dishes soon arrives at our table. The well-informed and well-spoken chefs present the dishes themselves, explaining in detail what’s served on the hand-crafted tableware in earthy shades reminiscent of the Australian landscape. Our cutlery consists of just a wooden spoon or fork. Otherwise, we are encouraged to use our hands to dig in.

We kick off with thin slivers of unripe macadamia floating on icy cold spanner crab consomme. The nut is crunchy and raw, and the broth pristine and refreshing. Next is a bowl of tart and savoury wild berries, rustled up with minimal intervention. A handful of rye berries, muntries and lilly pilly are dressed in seaweed oil, and lightly showered with kakadu plum dust. We also savour morsels of sweet sea urchin mingling with tangy-sweet dried tomato and pepper berries. The raw ingredients are cleverly bound with delicate elderflower oil. 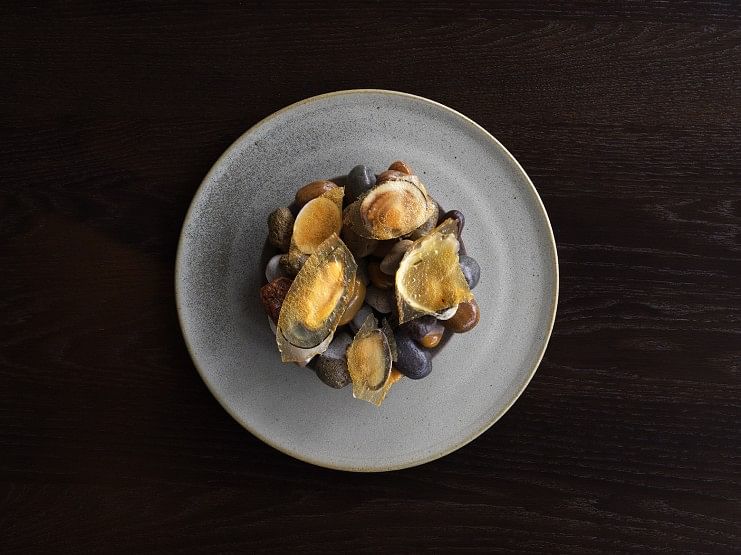 Among the bevy of courses, one of the showpieces that Redzepi dreamed up is the “seafood platter”. Sitting on a pile of shiny pebbles are plump pippies, mussels, strawberry clams, flame cockles, and oysters. The shellfish are lightly marinated in tomato water vinaigrette and spiced oil. Each bivalve is then topped with crisp, paper-thin shards of chicken and crocodile fat. Yes, Aussie croc. You simply use your hands to enjoy all the raw, pristine succulence just like you are eating them fresh by the seaside.

Another standout is the seafood “pie”. The chef explains: “This is a seaweed tart with a filling of caramalised scallop fudge. Tasmanian scallops are pureed, caramelised and turned into powder, and then rehydrated with grapeseed oil, plus a touch of beeswax.” We festoon the tart with subtly fragrant purple-pink lantana flowers before savouring its dark, dense richness. 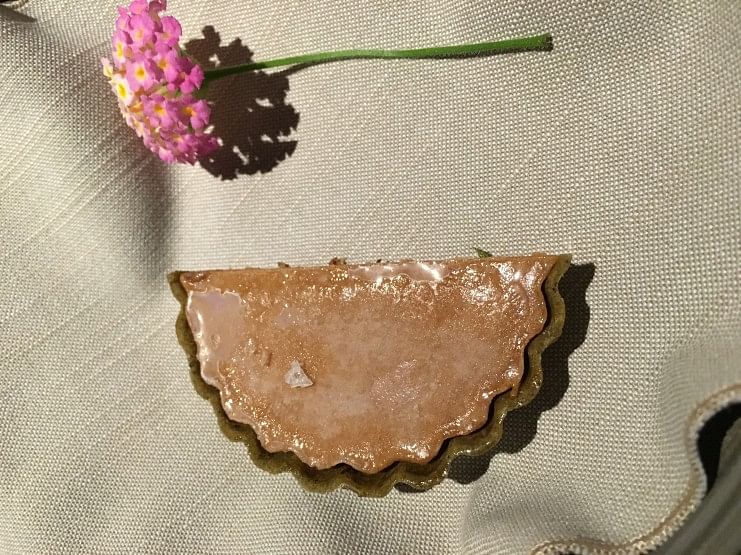 A different chef emerges from the kitchen with gigantic live abalones that are still “dancing” in their shells. It’s almost like a fancy show-and-tell session. Back in the kitchen, they are confit, battered and turned into abalone schnitzel. Cocooned within the crispy batter is superbly juicy abalone paired with house-made vegemite sauce. This golden disc is flanked with colourful bush condiments such as Neptune’s Necklace, a type of seaweed whose string of salty green beads pop in the mouth, finger lime with its distinct citrusy caviar-like pulp, mat-rush, a sturdy coastal plant, and an ancient, dinosaur-era bunya nut, among others. It’s a whole new realm of flavour and texture that’s so foreign to most of us, and probably even the locals. 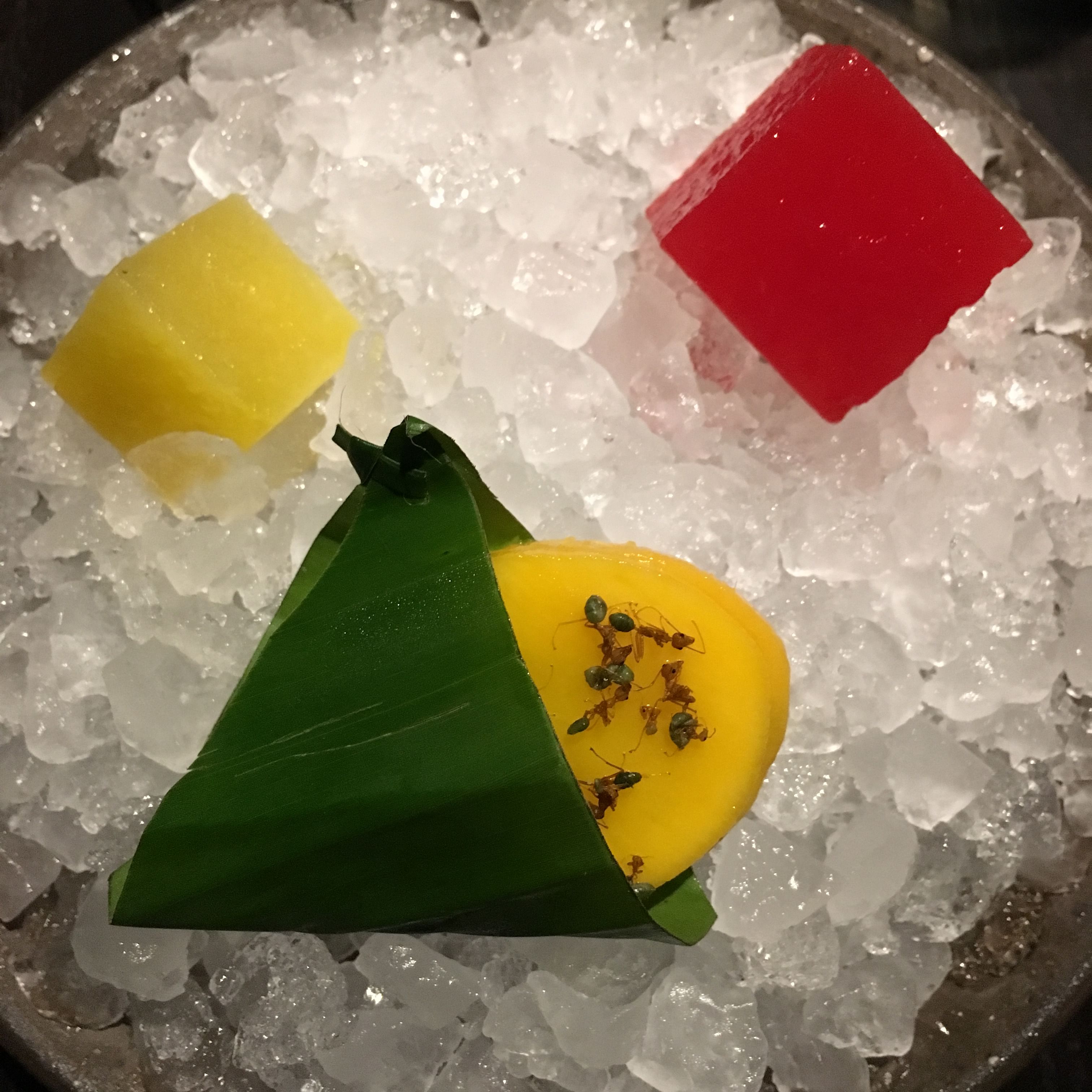 The meal rounds off with marinated fresh fruit topped with a scattering of tangy ants all the way from Darwin, a pillowy rum lamington resting on a dollop of tamarind sauce, and a freekeh glazed popsicle with a toffee filling.

None of us are here to rate this dinner. In fact, it’s the ultimate privilege to dine at this sold-out pop-up. 27,000 people are still on the wait-list, hoping to score a table. The entire experience undoubtedly deserves top marks thanks to the exquisite execution and extraordinary service. Perhaps what’s most important is that every guest left the dinner with an enlightened mind and palate – having experienced Australia on a plate.

The last meal at Noma Australia will be served on Apr 2. Noma’s team will re-open their restaurant in Copenhagen in May, with their new location slated for reveal in 2017. For more information, visit www.noma.dk/australia

Look out for the next issue of The Peak Selections: Gourmet and Travel in June as we follow Rene Redzepi on a foraging trip around the Southern Highlands of New South Wales.