The rise of Japanese cocktail culture in Singapore

Precise, ritualistic, and elegant, Japanese-style cocktail making is in a class of its own. 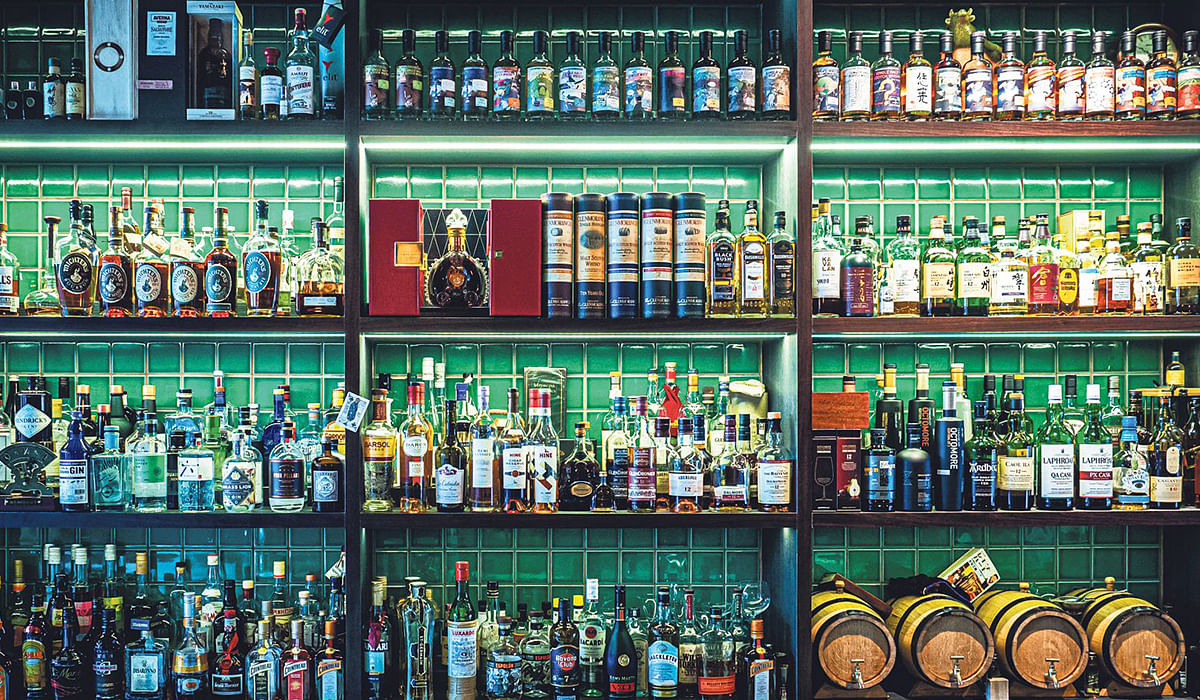 When you order a negroni from Anthony Zhong, you’re not just getting a drink; you’re entering into a cultural transaction with this Japanese-trained bartender who has created a slice of Ginza in his intimate bar Shin Gi Tai in Telok Ayer Street. Over the past four years he’s built up a cult following for his precisely-crafted cocktails and storytelling skills while feeding them a small menu of substantial bites from Japanese beef rice to Hakka Abacus seeds.

Part Midnight Diner (the Netflix series), part Tachinomiya (Japanese standing bars) Shin Gi Tai represents a growing bar culture of small but well-curated watering holes with a strong Japanese sensibility that emphasises craftsmanship and a quiet, unintimidating ambience for even the single drinker to feel comfortable in and enjoy some banter and simple food. Forget glitzy showmanship. Imagine a sushi bar but with a bartender instead of a chef, where personal rapport and quality fare are paramount.

Shin Gi Tai projects an air of cosy casualness, with its main feature being the shelves stacked with liquor bottles behind the bartenders. Classic cocktails with a modern twist are Mr Zhong’s specialty, but tell him what strikes your fancy and he’ll put his hard-earned skills to work at creating an impromptu tipple just for you.

He will put you at ease with his “war tales” about how he was hired by a Japanese bar in Singapore some 14 years ago and was sent for a three month training stint in Tokyo where he almost succumbed to culture shock and gruelling working conditions. Humiliation by his superiors was the norm, and so were cracked bleeding fingers from squeezing citrus juice every day. But he persevered beyond the three months to hit two years, returning to Singapore as a proficient Japanese-style bartender with perfect ice carving skills.

With skills that differ greatly from the more familiar American or European bartending styles, bars like Shin Gi Tai and a few other Japanese-style players are gaining traction, especially with the move away from boisterous, ‘loud’ drinking experiences towards more personal service and of course, food.

Anthony Zhong (second from left) with his bartenders.

Some of Shin Gi Tai’s dishes.

Some of Shin Gi Tai’s dishes.

The days of ‘painting the town red’ are over – where revellers go bar hopping in groups and get increasingly sloshed as the night wears on – with those still on their feet after the fifth or sixth stop Googling for a supper spot.

“Being seen at the latest ‘in’ bar and making a lot of noise is passe,” says F&B consultant Mika Tomiyama who has noticed the growing interest in bars like Shin Gi Tai.

Instead, today’s barfly is likely to seek out a watering hole that’s quieter, fussfree and more inclusive; a place where the bartender literally knows your name. In Japan, such a concept is not new.

Known for its Tachinomiya or standing bars, its drinking culture dates back to the Edo period (1603 to 1868) when sake shops served pours in wooden measuring cups. By the time of the Meiji era which succeeded the Edo, these bars had turned into stores that also sold wine, beer and spirits over counters that were made from stacked wooden beer crates. These bars were popular with the more introverted types who don’t feel out of place in one.

In Singapore, the fascination with Japanese culture has led bars like Shin Gi Tai to adapt the concept of shokunin or craftsmanship. Says Ms Tomiyama, “For authenticity, the bartenders are often trained by Japanese bartenders and have a strong connection to Japan. This applies to bars around the world too (such as Mr Zhong in Singapore).”

Live Twice – by the Jigger & Pony folks – is one of the newest cocktail establishments in town. It takes its design cue from mid-century Japan, and aims to be the vanguard of Japanese bartending here.

Owner Indra Kantono says, “I’ve always been fond of the craft of Japanese bartending, and I’ve wanted to do our own inventive take on Japanese cocktail bars for at least a couple of years.

We felt that if we marry the technical precision of Japanese bars with Jigger & Pony’s convivial hospitality, we would be able to create something unique and enduring.” These bars fit in with changing tastes – they are small, with a cosy ambience, says Vivian Pei, the Singapore chair for Asia’s 50 Best Bars. “Because of their size, you can have a more intimate experience with the bartenders. The drinks lists tend to be limited but they are very well curated, which leads to a great overall experience for the guest.”

For example, at Live Twice, the customer is offered two cocktail lists comprising just seven cocktails each, featuring both classics and original creations. Says principal bartender Leow Yinying, “They’re made with at most four ingredients, in keeping with our philosophy of minimalism and simplicity. In fact, our drinks are mostly spirit-forward and lean towards the dry side.”

There is also an in-house chef to whip up “elevated izakaya food that is yoshoku(western food) in style and aligned to the drinks menu” such as ebi and corn katsu, chicken karaage and beef katsu sando. Decorwise, plywood lines the walls of the long narrow space, augmented by the dim glow of vintage lamps. A classic Akari pendant lamp hangs proudly above the alcove – a balance of retro chic and modern charm.

(Left) The hallway of Live Twice. (Right) The revered whiskies Yamazaki 50 and Saburomaru 1960.

The posh surroundings of SaintLouis House.

SaintLouis House has some of the world’s largest Saint-Louis crystal chandeliers.

Setting the right mood and food

The bars place a high importance on the vibe and chemistry between bartender and guest. At Shin Gi Tai, the vibe is always chatty and convivial as owner Mr Zhong is known for fascinating anecdotes on bartending culled from his many travels.

At Le Binchotan, head chef-bartender Jeremmy Chiam describes its interior as “a chic bunker with an arched ceiling and a long stone bar counter. Even the lightingis strategically placed and dim, setting the tone of a cosy izakaya.”

He adds, “Our customers are mainly locals with 40 per cent foreigners, and they come to us through word of mouth. More than 70 per cent come for the food and cosy atmosphere. Also, more than half of our customers like to be engaged in conversation while the rest are usually here on a date or for a private moment.” As the name suggests, the 38-seat eatery serves French-Japanese tapas grilled over white charcoal or bincho-zumi. Not all food comes in yakitori form though; Chef Chiam’s signature Uni & Caviar features a base of ice cream-textured corn mousse and grilled golden cob which is a crowd pleaser.

“Food is an important factor as it completes the whole experience when thought and care are put into it,” says Ms Pei, while Ms Tomiyama notes that, “In Japan, all bartenders used to be able to cook but now some bars might get away with less-than-good cooking.”

At Shin Gi Tai, Mr Zhong explains that while food is part of the concept, it was more of a pragmatic decision. “In Singapore, the liquor licence usually ends at a minute before midnight, much earlier than in Japan. In order to capture the dinner crowd, I have an arrangement with a chef who cooks gyu-don, buta-kakuni and even mala tofu at one corner of the bar from 6 pm onwards.” Occasionally, Mr Zhong even offers his place to young freelance chefs.

But at the end of the day, Chef Chiam stresses that “service is most important. My customers are more forgiving when it comes to food!”

The Japanese bar concept is taken to an upscale level at Saint-Louis House, which boasts a dazzling collection of rare whiskies from Japan and Scotland.

According to Ryan Leow, director of corporate sales and marketing, the bar has an extensive range of over 4,500 bottles in their whisky museum, of which more than 500 bottles are rare Japanese whiskies, including the oldest one ever released – Saburomaru 1960 55 Year Old; and the highly coveted Yamazaki 50, in all three editions. Its bartenders also serve curated cocktails in exclusive private rooms. The bar also boasts the largest collection of Saint-Louis crystal chandeliers in Southeast Asia, handmade and flown in from the oldest crystal glass maker in Europe, with roots dating back to 1586.

From the décor to the exquisite range of crystal glassware to the level of service, this is the ultimate playground for the whisky enthusiast. For the supremely indulgent, there is a tasting of Yamazaki 50 and Saburomaru 1960 55 Year at $24,999++ per tasting portion (2cl) and $2,499++ (2cl) respectively. A special menu of dishes to complement the drinks is in development, but even without, it’s one cocktail bar you definitely want to be friends with the bartender at.