Tanoshii: Hidden gem of a restaurant 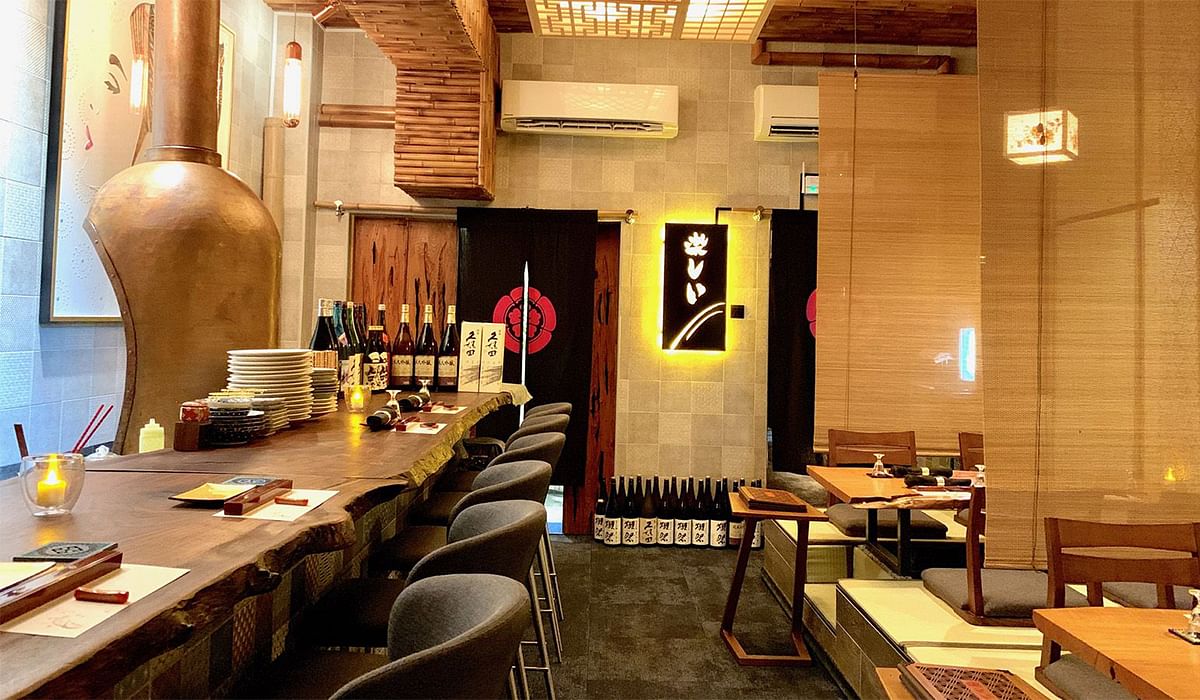 First, it takes up space in a carved-out portion of a house that sticks out like an unkempt neighbour in a sea of well-coiffed conservation houses on Cairnhill Road. The other half is a beauty salon, touting facial and massage packages on a banner outside. At the doorstep of Tanoshii is a faded handwritten sign that says “take off shoes”, with a few pairs of footwear scattered around. Hoping that maybe it doesn’t apply to us, we try to step inside, but the shoe police aka restaurant server suddenly appears to enforce its bare feet rule.

It’s not fair, you get to wear slippers, we complain inwardly as we pad after the server into a long dining hall that’s half counter and half horigotatsu-style recessed table seating. The solid wood counter and tables cut from original tree trunks with uneven edges intact prove that this is no budget set up, although its definition of style seems derived from a culture different from ours.

In fact, you might experience a mild culture shock when you step into Tanoshii – a restaurant that serves Japanese food with a strong Korean accent. The chef and staff converse in Korean, while the menu features Japanese sukiyaki, shabu shabu and kushikatsu served side by side with kimchi, japchae, abalone porridge and fusion bibimbap noodles.

The Korean chef used to be a gym instructor before learning to cook Japanese food from a top chef in Osaka.

Live Jeju snails are cooked for three hours before being gratinated in their shells in a potent butter-garlic-parsley mixture.

The palm-sized whole abalone is served in its shell, steamed till tender with a yielding bite.

The longevity salad looks like a bibimbap without the rice.

The Osaka version of beef tendon is soft yet satisfyingly resilient.

Just as you’re trying to process the twinning of cuisines, it turns out the chef also serves French-style escargot.

The chef is a beefy, silent Korean in tight sweatshirt who we’re told used to be a gym instructor who sold his fitness business to learn how to cook Japanese food from a top chef in Osaka. He’s not particularly friendly at first, preferring to speak through the multiple courses he prepares as part of the S$118 tasting menu. We don’t want to antagonise him either, since he looks like he might have personally carried his wooden table tops into the restaurant under one arm.

As we entertain fantasies of walking into the set of a Korean action movie with Hyun Bin waiting in the wings to engage in fisticuffs with said Mr Brawn, we’re fed with the first course of our omakase menu. It’s not the strongest start – a cup of thick pumpkin soup that has you spooning up mouthfuls of baby food.

We’re happier with the canape the chef meticulously prepares from behind the counter – light, crisp toasted baguette slices topped with a luscious mixture of minced onion and carrot in a light, creamy dressing decorated with some pearls of caviar.

Because we’re afraid the omakase won’t be filling enough, we add on a plate of Doteyaki (S$22) – an Osaka version of beef tendon that’s soft yet satisfyingly resilient, braised in a savoury-sweet soy-miso gravy that envelopes each gelatinous bite. You won’t need it because the menu is really quite filling, but if you’re a fan of tendon, get it anyway.

A colourful composed longevity salad is next, looking like a bibimbap without the rice. A medley of julienned vegetables, mushrooms, omelette, beef and rice paper strips are pulled together into a harmonious mix with enough creamy dressing that has a pleasant, mustardy kick.

The highlight of the menu is a palm-sized whole abalone served in its shell, steamed till tender with a yielding bite, cut into manageable pieces that you dip into a blended liver sauce and add a bit of fresh wasabi. It’s a perfect combination of pleasure and pain – the silky texture of abalone flesh and sweet, rich sauce tempered with a bit of wasabi that cuts through the richness and goes right through your nostrils. The abalone is harvested from Jeju island, which accounts for its quality, and also down-to-earth price.

Second best is the molten hot escargot – it seems that live Jeju snails are cooked for three hours before being gratinated in their shells in a potent butter-garlic-parsley mixture. You eat them more for the texture than any real flavour, which comes from its buttery coating. One of our shells turns out to be empty, and the only time we see any kind of emotion from the chef is when he’s so appalled that we get an extra two in compensation.

He follows up with three slices of pan-fried wagyu yakiniku, which is perfectly acceptable, arranged atop a pile of shaved onions seasoned with a very good onion dressing.

Kushikatsu is a house speciality, going by the impressive brass structure that hides a frying station, producing sticks of meat and seafood in various combinations deep fried in a thick crumb-coated batter. It’s a hit-and-miss assortment of slightly mushy prawns, tasty fat scallops and chicken and leeks overwhelmed by a thick savoury sweet sauce.

Finally, a comforting salmon ochasuke ends off the meal – hot dashi poured over rice and bits of salmon. A little paper cup of Japanese ice cream is a no-frills dessert.

The food is enjoyable in a casual, unpretentious sense, with some strong moments. It seems to have a strong stable of regulars, so repeated visits may be necessary to really experience the “tanoshii” – Japanese for “enjoy”. Or maybe like us, they’re waiting for Hyun Bin to show up too.

(RELATED: How Ryunique’s fascinating “hybrid” cuisine has made it one of Seoul’s best restaurants)