Manhattans and negronis get special treatment with the best flavours drawn out from a round of barrels. 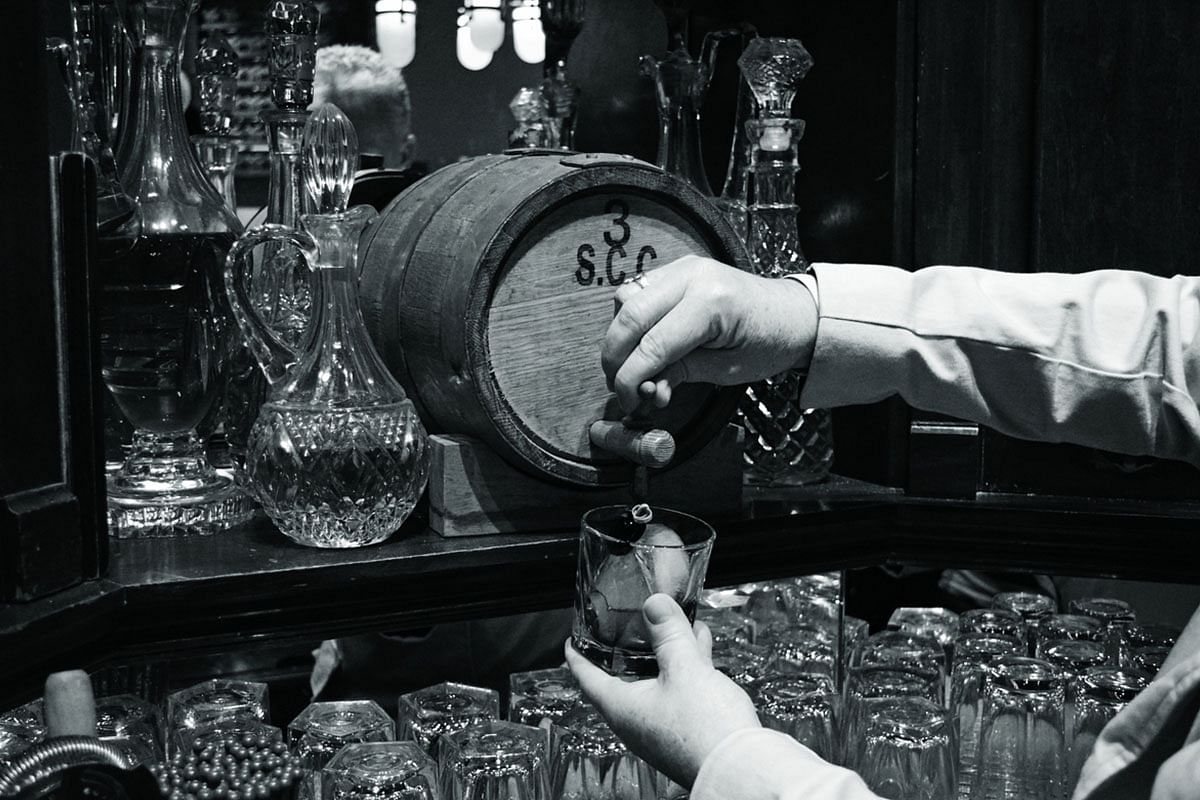 [dropcap size=small]I[/dropcap]f you thought making cocktails involved putting ingredients – no matter how complex – into a glass and serving, think again. As today’s drinkers and diners continue to eschew the mass-produced and pre-packaged in favour of the artisanal and unexpected, the thirst for experiences that are unique has given cocktails a whole new life of their own.

A cocktail today may be made weeks in advance, and left to evolve independently and unexpectedly in what looks like a Victorian science experiment – a stack of small oak barrels topped by a funnel and connected with brass pipes. At least that’s how a ground-breaking ageing cocktail at Zuma looks. The high-end Japanese restaurant chain launched what it claims is the world’s first “evolving cocktail system”, the Zuma Zacapa Live Solera, last year.

The system consists of four American oak barrels. The first three barrels are infused with specific flavours, which permeate the Guatemalan Zacapa rum as it trickles through them. The longer the cocktail spends in the barrels, the more the flavour changes. The cocktail is poured from the final, fourth barrel. Each time it is poured, the liquid is replaced with that from the barrel next in line.

Singapore, too, has its own Solera-system cocktails on tap. Manhattan bar at Regent Singapore barrel-ages a selection of cocktails in the world’s first in-hotel rickhouse (a warehouse in which barrels of ageing spirit are kept). It holds 106 American oak barrels, all filled with spirits, bitters and cocktails slowly ageing. Its signature cocktail, the solera-aged negroni, is made of St George Dry Rye Gin, Citadelle Gin, Campari, Mancino Rosso Vermouth and Tempus Fugit Gran Classico Bitters.

“The solera system originated with the Spanish and Portuguese, and is still being practised with sherries,” says Manhattan bar manager Philip Bischoff . “It was developed to maintain consistency over different vintages. It works with wines or cocktails from the oldest barrels being combined with pulls from newer ones. This creates a cohesive house blend.” The result? “A sophisticated blend of young and old that brings depth, character, complexity and roundness to your glass,” says Bischoff , who says his negroni spends about two weeks at each level of barrel.

While not strictly working on the solera system, the barrels are refilled when they are about a quarter full, which usually takes about three to four weeks, so the cocktail changes slightly as it ages longer in the barrel. The quarter left in the barrel helps keep a consistent product, since there is always some aged cocktail left in the mix.

The cocktail changes over time, which is why I like ageing and serving it like this, directly from the barrel, so that guests can experience it,” says Schneider. “Some bars that serve aged cocktails will barrel-age for a specified amount of time, then strain off the cocktail and serve it from bottles. That method is more consistent, but I like the idea of a cocktail that is always changing.”

So how does the cocktail evolve over time? “The rough edges of the whiskey are mellowed. The vermouth oxidises slightly, giving the cocktail some notes of dry sherry wine. It also seems a bit sweeter than a “fresh” Manhattan, because it picks up more notes of vanilla from the oak, and the flavours are a bit more condensed,” says Schneider.

While many cocktails are aged for a few weeks, mixologist and chef Ethan Leslie Leong ages his Golden Dust cocktail for almost a year. The cocktail, served at cafe by day and award-winning bar by night Maison Ikkoku, is made from Japanese gin, pomegranate bitters, and French vermouth. It is aged in a Kiku-Masamune Junmai Taru sake barrel, which imparts the cocktail with bright hints of cedar wood flavour. The cocktail is stirred with ice, then strained, before serving.

Barrel-ageing a cocktail also changes a cocktail’s look and mouthfeel. “Depending on the type of wood and its treatment (whether charred or coffee-washed), the cocktail’s colour will be deeper or lighter,” says Bischoff , who also notes that his barrel-aged negroni ages very quickly and noticeably in the first week, slowing down over the following weeks. “The product usually has a balanced finish and gentler mouthfeel.”

But the appeal of barrel-aged and evolving cocktails is not only their sensory titillations. “Most of the barrel-aged cocktails I’ve seen around are classics, such as Manhattans, Negronis, Old Fashioneds,” says Schneider.

He adds: “The appeal is that people like experiencing familiar things in new ways. There is a novelty aspect to it. All those cocktails are great on their own. And ageing them in barrels doesn’t necessarily make them better. But it puts an interesting spin on the old standbys.”

(RELATED: Lulu’s Lounge in Pan Pacific is a bar with personality.)