The future of Singaporean food: redefining the cuisine

Caught between high-profile expat chefs and local hawker food, can young homegrown chefs put themselves on the map? 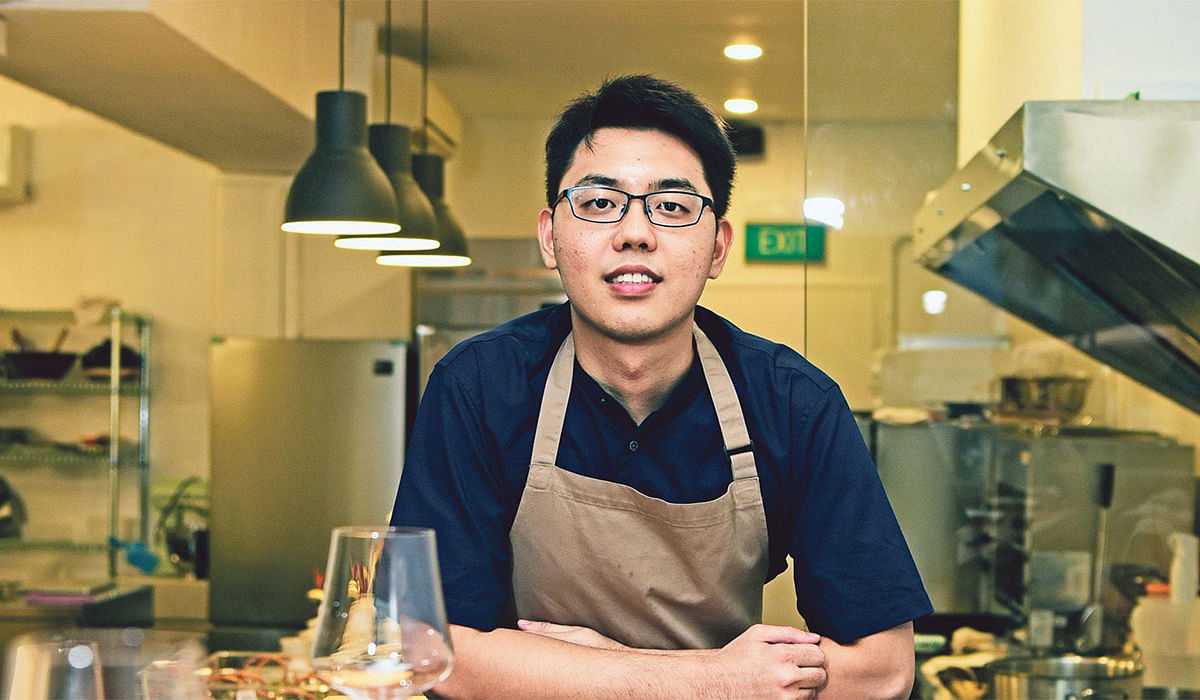 [dropcap size=small]O[/dropcap]n June 25, as the culinary world watched the countdown of The World’s 50Best Restaurants at Marina Bay Sands, Gan Ming Kiat was on the other side of town in Serangoon Gardens, quietly celebrating his own private achievement – the official opening of his new restaurant, Mustard Seed.

Chef Gan is a Singaporean chef – one of a rare breed to strike out on his own, serving his brand of local cuisine. Whether anyone with anything to do with the 50Best, Michelin or other restaurant guides will take notice of him in his fully self-funded, social media-absent little eatery in a row of sleepy shophouses, is a long shot.

That’s because much of the global attention on Singapore’s dining scene has mainly been focused on either fine dining restaurants run by high-profile expat chefs, or hawker food. Chef Gan falls into a somewhat awkward middle – a homegrown chef trying to create his own interpretation of Singaporean cuisine. While it tends to lean towards either heritage food like Peranakan or mod-sin, the jury is still out on what exactly modern Singaporean cuisine is.

It’s a perennial issue for young chefs who are torn between tradition and the modern influences they are exposed to, leaving the unanswered question of what it means to be a Singapore chef.

Turmeric frog’s legs (above) and Yong tau foo are some of Chef Gan’s current and old dishes.

Turmeric frog’s legs and Yong tau foo (above) are some of Chef Gan’s current and old dishes.

At Mustard Seed, Chef Gan has no doubts that what he is serving at his tasting menu-only restaurant in Brighton Crescent is nothing if not Singaporean food. Hokkaido scallops with lily bulb vichyssoise; superior stock dobinmushi; crab porridge; and Sawara with white curry and milk bun.

”It’s hearty, comforting food,” he says, inspired by his stints at the now-defunct Goto Japanese restaurant and the Michelin-starred Peranakan eatery, Candlenut. ”My food is more focused on Singaporean flavours and that’s largely due to having trained at Candlenut where I learned about frying rempah and spice-based sauces. My white curry has white rempah in it, while my crab porridge also has a spice paste.”

He adds that he’s always wanted to cook his own food from the day he started cooking. But while his food stays close to familiar flavours, it doesn’t mean that Singaporean cuisine has to follow a certain template.

(RELATED: Is there such a thing as Singapore cuisine?)

”Currently, chefs of my generation are quite preoccupied with working for big name restaurants but eventually when they come out to do their own thing, it’s inevitable that their Singaporean upbringing will come out through their food. It’s the same as the Japanese many years ago when they diversified and went to France and Italy to learn the techniques. Now there are Italian and French restaurants in Japan but they’re Japanese-Italian. So I think that will apply to the current generation of Singapore chefs.”

The number one issue that tends to stymie the development of a Singaporean cuisine is the perception of local food, says Malcolm Lee, Chef Gan’s mentor and chef-owner of Candlenut.

”It’s the sense that you cannot pay more than a certain amount for local food and then the chef has no incentive to cook something that won’t be appreciated.”

Cooking local food is not as glamorous as French fine dining, ”but for me it helps that I come from a Peranakan family and I really like to eat the food so I stuck with it,” he adds. ”My boys come to work for me with different goals: they want to learn more about Peranakan food or they’ve worked in other Michelin restaurants and they ask themselves ‘Why do I cook this? It’s not me’. They appreciate the craft and history behind local food and from there they understand the essence and develop their own style. They may not do it 100 per cent – whether it’s Peranakan or Cantonese, whatever – but they bring with them their history and what they learn to create something that is uniquely theirs.”

During the 50Best flurry of activities the past week, one Singaporean chef took it upon himself to provide a different perspective of the local food scene, taking visiting chefs and international media out on his own curated farm tours including dairy, fish and vegetable producers.

The response has been tremendous, says Han Li Guang, chef-owner of Michelin-starred Labyrinth, who showed how these ingredients translate into his locavore menu. ”They didn’t expect to find out that Singapore actually has agriculture because of the perception that we don’t grow anything.”

(RELATED: Labyrinth’s Han Li Guang is betting it all on fresh Singapore produce)

The challenge is to show the world that Singapore is about more than just hawker food, says Chef Han. And based on the chefs’ response, there is a genuine interest in discovering and experiencing a unique Singapore cuisine, which he feels chefs should focus on.

”It will take time. It’s about finding yourself, the way we found our style and our story. And it’s also about being proud of ourselves.”

”Our chefs need to see value in what they do,” says Chef Lee. ”I remember going through dark years of self-discovery, thinking that rendang was low class compared to European food. Then I realised, no, if you can cook it well it can stand at the same level. But it took me a long time. It was only in the last year and a half that I gained this confidence.”

Chefs Han and Lee, Taiwan-based Jimmy Lin (who was the Asia 50Best’s One to Watch chef this year for his fine dining approach to Singapore cuisine), Jason Tan and Damian D’Silva are some of the established chefs who have flown the Singapore flag overseas, but the stage is set for a new generation of chefs like Mustard Seed’s Chef Gan to take the cuisine to the next level.

Grooming the new generation of Singapore chefs was what restaurateur Tan Ken Loon had in mind when he started Magic Square – a one year pop up that concluded in April and produced three ‘graduates’ – Desmond Shen, Marcus Leow and Abel Su. The second Magic Square will start in July, this time with a mix of female and male chefs.

”The goal of Magic Square is two-pronged,” says Mr Tan. ”One is to incubate young chefs as they learn the creative and business aspects. The other is, how do we push Singapore cuisine in a direction we feel it should go? There are chefs who take hawker food and try to make it something else. Nothing wrong with that. Modification is a natural progression, but it’s already been done.”

(RELATED: Why Magic Square, a Singapore pop-up, is letting young chefs take over the restaurant)

He stresses that it’s not about moving away from modern hawker cuisine but rather a parallel offshoot that incorporates new ideas. He concurs with Chefs Lee, Han and Gan that it’s about projecting one’s own background into whatever cuisine interests one most.

Magic Square alumnus Marcus Leow agrees too. ”That’s why I want to get as much experience as possible to develop a proper style. I’m going to London to stage for a few weeks at Ikoyi, which takes African ingredients and uses them in modern British food, which is what I want to do with Peranakan ingredients because that’s my heritage.”

Creativity, he adds, is something that all chefs have, ”but to have ideas that can be relevant for five to 10 years, I need to build up some experience first.”

Fellow alumnus Abel Su feels that, ultimately, ”A Singapore chef is just a chef who was born and raised in Singapore. He (or she) doesn’t need to be defined by the cuisine he’s cooking – he should be free to decide.

Trying to define cuisine is a problem only for those trying to define it. Most cuisines are influenced by other cultures (Tempura being originally Portuguese for example), so to say a cuisine exclusively belongs to a single country is futile.”

”It’s what you bring to your cuisine that makes you a Singaporean chef. In this day and age, not a lot of us are rooted in our traditions and we’re exposed to a lot of influences. But it doesn’t make us less Singaporean.”

But above everything else, as Chef Gan puts it, ”the product has to be good. If it isn’t, even if it’s a Singaporean chef cooking Singaporean food, it’s very difficult to promote them. First and foremost, the food has to be good and the attention will naturally follow.”

(RELATED: Why elevating Singapore cuisine is so difficult, chefs weigh in)