A modern steakhouse with classic touches. 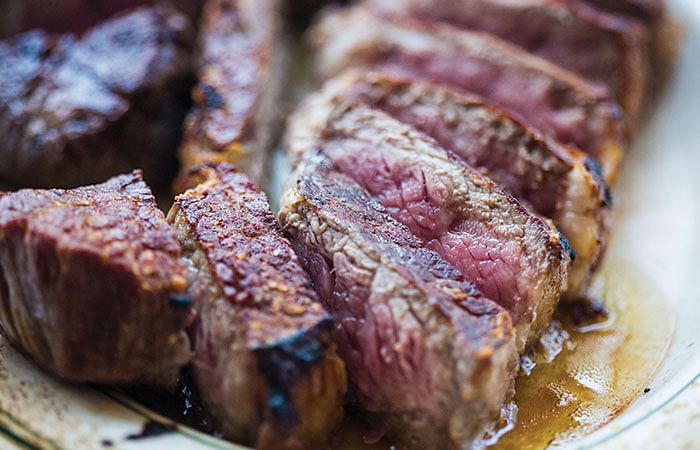 Wolfgang Zwiener had a four decade-long career as head-waiter at the renowned Peter Luger Steakhouse in New York. Before he could settle into retirement, his son convinced him to start his own steakhouse in 2004.

Now, 13 years in, the group has expanded from its flagship Park Avenue restaurant across USA, Japan and Korea. Its latest Singapore one, launched at the new InterContinental Robertson Quay, is the start of a growing Southeast Asian extension. It remains faithful to the offerings of the other restaurants, both modern and elegant with its brown leather-bound seats and white tablecloth-clad tables. Waiters don the traditional attire of crisp shirts and bow ties, providing service that is at once warm and attentive. No doubt, the restaurant is a reflection of Zwiener’s four decade-long career as head waiter at the renowned Peter Luger Steakhouse in New York.

It is what you would expect of an old-school steakhouse, but better. Say Wolfgang’s Salad, a seemingly pedestrian mix of roasted capsicums, string beans, onions, shrimp and tomatoes is made much more exciting topped with cubes of Canadian bacon and tossed with a light vinaigrette dressing – this is a salad even die-hard meat lovers will actually appreciate. The bacon is available as an appetiser on its own as well, cut extra thick per slice. Another highlight is the seafood platter, a hunkering tower of Maine lobster, jumbo shrimp and crabmeat. Our crabmeat was bluefin instead of the usual snow crab; our waiter apologised, but it was still a delicious replacement. The accompanying cocktail sauce, however, was much too sweet and would have not done justice to the fresh array of seafood.

And the headlining act: the broiled steaks at Wolfgang’s. The restaurant proudly uses only USDA prime steaks. The convivial restaurant manager shares that though the appeal for Japanese Wagyu has been strong, Wolfgang’s insists on keeping its identity as a New York-ian brand even in Japan. The restaurant also insists on dry-aging porterhouse steaks, sirloins and rib-eyes to a maximum period of 28 days in its dry-aging cabinet: a bunker-like cold room with industrial fans blowing powerfully towards racks of meat. The porterhouse steak – both sirloin and filet mignon still on the bone – is available for two, three or four persons. Straight from the broiler oven, piping hot steak is sliced and served to the table, butter still sizzling in the plate. The filet mignon is juicy and tender, but the sirloin is even better with more bite and meaty flavour. There are also sides to go with the steak, such as Japanese white rice. But diners are better off to accompany their meats with the classics: a homely creamed spinach, lobster mac and cheese for a decadent touch and the quintessential steak fries. The best parts in the steak are the hardest to cut: the charred fatty meat remnants still clinging on the T-bone. Instead of hacking it off with a steak knife, the service team is more than happy to help portion it out to bite-size pieces: a delicious, unctuous after-dinner treat to savour over red wine.