Why restaurants in Singapore are jumping on the healthful eating bandwagon

Wagyu burgers and truffle pizza are giving way to quinoa patties and kale chips as restaurants jump on the healthful eating bandwagon. 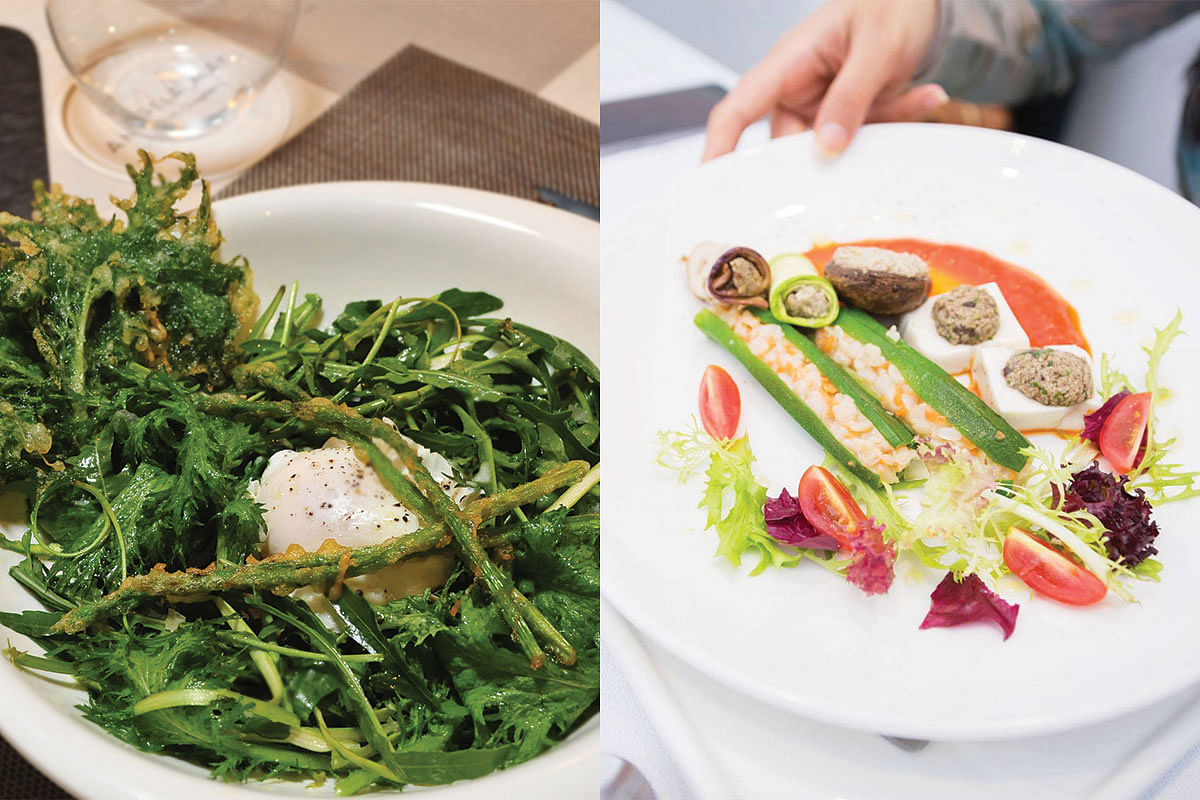 [dropcap size=small]S[/dropcap]o green is the new black. That is, healthy eating is “in”. Throw a stone in the CBD and you’re bound to hit a salad shop, grain bowl cafe or cold-pressed juice bar, all touting superfoods to give you lean muscle and protection from chronic diseases.

That’s just the tip of the iceberg (lettuce). There are restaurants which calculate nutritional value, use local or organic produce or even subscribe to diet fads from paleo to gluten-free. Take the newly opened Frunatic, a fine-dining wellness-focused restaurant which offers customers a health consultation and designs meal plans accordingly.

“People pick their food based on what they like to eat and not what their body needs. If you go to a dietitian who tells you to eat more beetroot, chances are you won’t because you just don’t like it,” explains Frunatic’s founder Jason Fong. “So we do both – we persuade them to change their lifestyle a little, and I try to make my food taste good so people can eat it as a culinary experience.”

In the case of the new Como Cuisine at Dempsey, clean eating and overall wellness have always been a part of their DNA. In fact, the chefs at the Como Group’s restaurants around the world work closely with nutritionists, and Como Cuisine’s executive chef Timothy de Souza is no exception. He works with organic produce store SuperNature, and occasionally consults its in-house nutritionist Eve Persak.

“If you want to be healthy then you’ve definitely got to look at what you’re fuelling your body with. Everybody wants to live longer and happier, so it’s good that it’s becoming a trend. But Como’s holistic philosophy has been there for years now,” says Chef de Souza.

For Angela May, chef of the contemporary Asian-inspired restaurant Angela May Food Chapters, healthy eating comes from using ingredients that are as fresh as possible. Her restaurant was birthed from her love for farmer’s markets and exploring whatever is fresh that day.

“I think it’s more nutritious to eat fresh food that hasn’t been shipped around, and most farms here are spray-free even if not labelled organic. It’s very clean, and that’s one of the healthiest ways to eat,” she says.

She notes that as more people are aware of their dietary needs, her restaurant has been able to meet the demand from groups of people with various diets that want to eat together.

Meanwhile, Thai celebrity Chef Ian Kittichai, who has helmed the spa cuisine restaurant Tangerine at Resorts World Sentosa since 2015, observes that Singaporeans are indeed up to date with the growing wellness movement.

His restaurant has a large following among health-conscious locals. “It is becoming widely known that what you eat directly impacts your health, and when you eat well, you feel better,” he says.

Frunatic’s Fong, however, feels that there’s still quite a way to go, as education still remains a big obstacle for food like his.

“Singapore does have a market for my food but it’s a small niche. Five years ago I was probably one of the first to start the cold-pressed technique, but it didn’t take off then. Now it’s growing but I’m already at the next level.”

He adds, “There is healthy food, clean food, and therapeutic food. But my clean or therapeutic food still gets labelled as ‘healthy’ food. There’s a movement (towards my kind of food), but it will take another 10 to 15 years for it to really catch on.”

It took Jason Fong almost five years and S$8 million worth of research and development, but just earlier this month, his efforts finally paid off when he opened his vegan fine-dining wellness restaurant – Frunatic.

“I started my career as a finance guy, but I wanted to pursue something that can leave a legacy I can be proud of. So I decided I wanted to study food and the implications it has on our health,” he says.

Frunatic initially started in 2013, as a simple fruit salad bar at Star Vista. But it wasn’t working out very well so Fong put the business on hold and hired a team of nutritionists, dietitians, naturopathic doctors, and traditional Chinese medicine physicians to work with his chefs to build something more substantial.

“I started out with fruits because I thought they had a lot of nutrients, so that should be able to help people, but the concept was very mild. So I went back to the drawing board and did something more serious and science-based,” he explains.

At the new Frunatic, customers have two options – they can walk in and have a meal at S$108.80, or sign up for a longer-term package such as the Frunatic Trial Package (S$888 for 10 meals) or Frunatic New Lifestyle (S$6,000 for 100 meals). Each meal consists of eight courses, with dishes such as a chickpea salad and quinoa with a chive vinaigrette, or a Southwest tofu scramble with turmeric sauce and Swiss brown mushroom.

Though he admits the prices may seem daunting at first, Fong believes that the quality of his ingredients and the research spent on each dish make it worth the money.

“From a business perspective I have to price it at this price. People may say it’s expensive but for me I don’t think so. By the time I add things like Cordyceps and Lingzhi, my food cost is not cheap. And most fine-dining degustation menus are more expensive than this,” he notes. www.frunatic.com

(RELATED: Why organic greens are gaining traction as the healthier choice.)

If you’ve dined at one of the Como Group’s properties around the world, or own a copy of the Como Shambhala cookbook, then you might find the food at the newly-opened Como Cuisine familiar. This two-day-old addition to Como Dempsey – which also comprises The Dempsey Cookhouse & Bar by Chef Jean-Georges Vongerichten, one-Michelin-starred Peranakan restaurant Candlenut, and Ippoh Tempura Bar By Ginza Ippoh – features a menu that consolidates the signature dishes from the group’s restaurants as well as dishes from the cookbook.

Of course, they may not be the exact replicas, since the menu at Como Cuisine will also be influenced by the style of its executive chef Timothy de Souza, who was previously the executive chef at Como Maalifushi in the Maldives.

He describes: “Como Cuisine is a family-friendly all-day-dining restaurant that is a mash-up of all our properties worldwide and the tapas plates we do at F1 every year… It’s a hard one to put a finger on because we don’t want to confuse the hotels and Como Cuisine, yet still retain our own essence.”

The food will incorporate flavours from all over the world as well – from French, to Indonesian, to Middle Eastern, to Thai, and especially Indian because of Chef de Souza’s own background. Plus, the highlight of the kitchen, which is a tandoor oven.

“We do everything in-house – we do not buy breads, we make our own. We soak our own nuts, or seeds, to make the breads, cereals, and granola. So we don’t just buy something and jazz it up. You will see a lot of things that look simple but actually have a lot of work that goes into them,” he says.

The menu will include familiar dishes like their shrimp ceviche, as well as new ones like a lamb kofta cooked in the tandoor oven with coconut charcoal.

Even the familiar Caesar salad will have its own spin. Chef de Souza’s “tandoor Caesar” will have romaine leaves, avocado, chayote that’s been boiled in turmeric and slightly cooked in the tandoor, and dehydrated crisp green banana, served with tandoori chicken.

Adds Chef de Souza: “Como Cuisine is the first free-standing restaurant that’s away from a property, so people familiar with our food over the last 25 years may know and expect certain things, and that’s what they can expect from this restaurant.” comodempsey.sg