For the couple, having friends over for a home-cooked dinner on a weeknight is easily managed with careful planning. 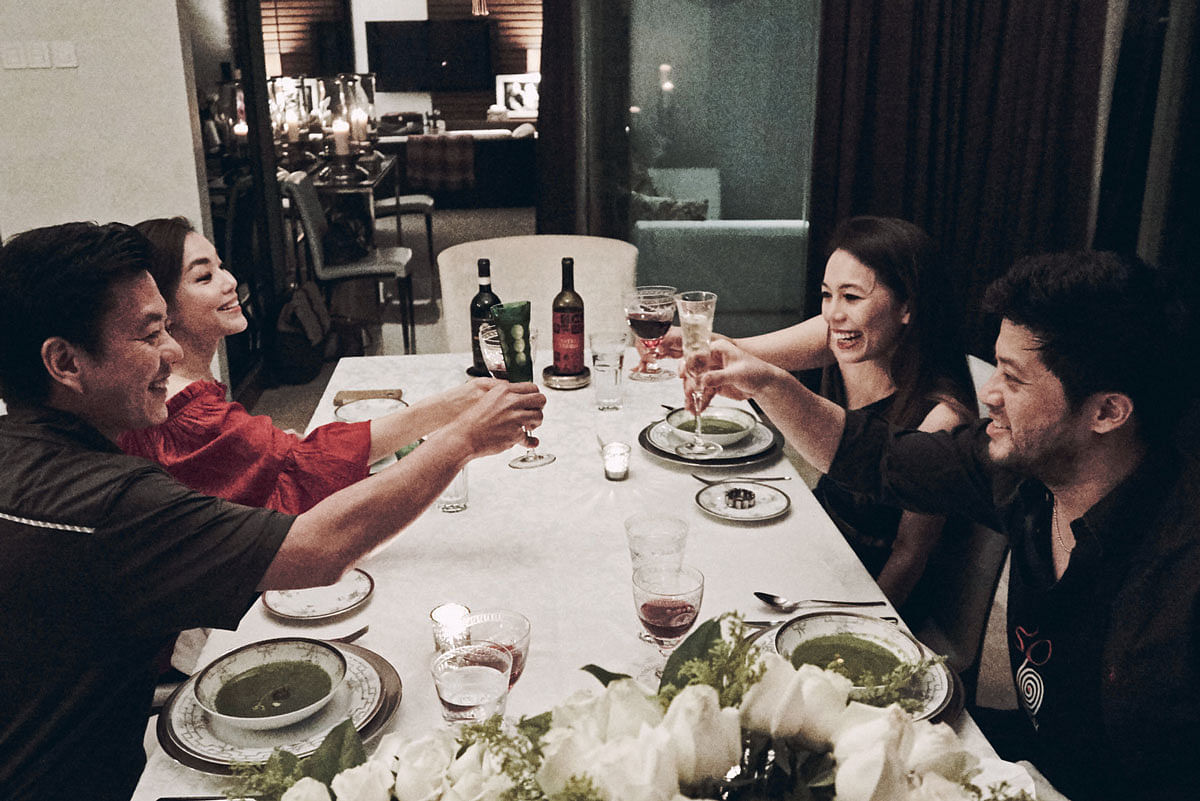 [dropcap size=small]R[/dropcap]ichard Wiluan is standing in his kitchen just before 6pm on a Friday evening, work shirtsleeves rolled up, while two helpers are busy with the mise en place for the dinner he will be cooking. He’s got his eye on the clock: His guests, Hock Tong Bee managing director Clinton Ang and his wife Tina Cheng are coming by at 7.30pm.

“It’s all about the timing,” says the avid home cook. “During the week, I don’t usually cook. When I do, I still need to prep beforehand. I’ll rustle up something simple — pastas are my strong point, as is meat. Vegetarianism is not something that suits me.”

For his first starter, Richard is doing a new take on Welsh rarebit. “Actually, it’s my first time making this dish. It’s important to have something for guests to nibble on, and canapes are a nice way to whet their appetites. This Welsh rarebit is different because I’m using Guinness to give a bit of a spike to the Red Leicester cheese sauce, and I’m serving it on soy and linseed bread with jamon Iberico.”

Because Richard cooks a la minute, timing is essential. “Welsh rarebit is something you can have in a pub, but the challenge is to ensure that it comes out piping hot, because you don’t want a soggy Welsh rarebit,” says the 38-year-old. 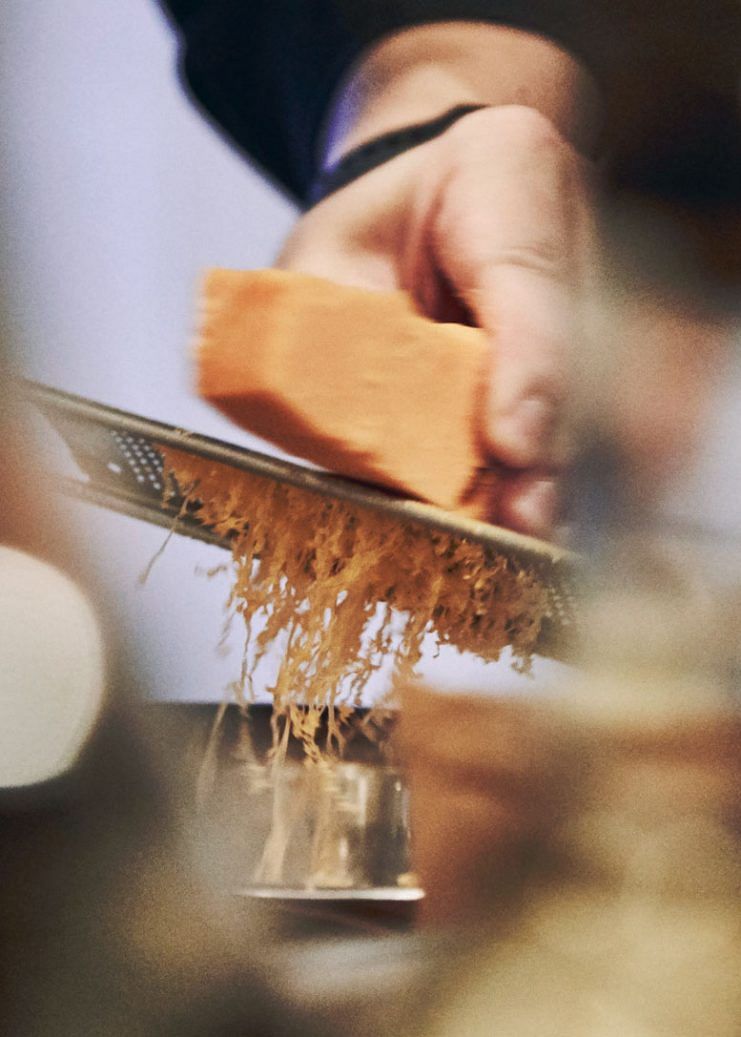 He prepped the green pea and broad bean soup last night. The flavours have been developing overnight and a simple reheating will be all it takes to get it ready. “Tonight’s first two dishes speak of my English heritage,” shares Richard; he cooks primarily European cuisine, in particular the comfort foods of his boarding school days in England.

“Richard also likes to use ingredients like ikura, uni and miso in his cooking,” says Ginny. She adds that her husband once spent a year in Tokyo with his Japanese godfather.

Fans are blowing full tilt in the kitchen, which is starting to warm up. The cooking is taking place primarily on the central island stove and in the oven. “There’s no air-conditioning in my kitchen,” declares Richard with a hint of pride. “I don’t want cold air blowing on my food.”

His attention to detail is the reason he spends half his time in the kitchen during a dinner party, while Ginny plays host at the dinner table. “It’s after the main course that I’ll join the guests and chat, and wind down with a whisky — though I’m often offered a glass of wine while I’m cooking,” Richard explains.

The third course, cold angel hair pasta with white truffle, Beluga caviar and uni, is fairly simple to put together while Richard focuses on the main event — beef. “I’m using USDA beef fillet: There’s not a lot of fat, just some marbling, but it’s a beautiful piece of meat, very tender. I’ll roast the beef with garlic butter and make my own sauce with wild mushrooms that my parents’ friends hand-picked in Switzerland, dried, and hand-carried back to Singapore. These I’ll reconstitute in the veal demi-glace that I already prepped yesterday and froze into cubes for easy reheating. I’ll saute the mushrooms with garlic oil; the secret to this is to add sherry. But I’ve decided to add a sherry cask Auchentoshan whisky and then flambe the meat, before adding more veal demi-glace, parsley, and cream to finish.”

For a side dish, Richard contemplates roasting bone marrow with breadcrumbs and butter and garnishing it with parsley, then settles on roasted vegetables. As for dessert: “I’m not a dessert person. My priorities are not in baking, so I usually disregard that.”

Richard, who is executive director of energy services provider KS Distribution and director of the Citramas Foundation, has been cooking since he was 16. “The first dish I cooked was a chicken dish with mushroom sauce for my mum. I was sent to boarding school in Oxford in the UK. During our fi rst year, we lived in the halls so we had food, but in our second year we moved into apartments, and I had to cook. I had to learn how to cook to survive. I found that I enjoyed cooking and was quite good at it — my friends would give me money to cook for them.”

The first dish Richard cooked for his wife, he says, was “a pasta dish”; he sheepishly adds that he can’t remember what it was. “It was spaghetti puttanesca in Singapore, July 2006,” says Ginny, who is half-Peranakan but doesn’t cook. (At home, the couple’s two helpers usually turn out Asian dishes such as popiah for the family.)

“Cooking really is Richard’s passion,” Ginny adds. “He lives to cook for birthdays and Christmas. The most memorable meal he has cooked for me to date was on Valentine’s Day 2007 in London. He cooked steak and pasta aglio olio in his flat in Chelsea. It was freezing cold, and the food was comforting and just perfect.”

Because Richard travels frequently for work and the couple often hosts dinner parties on the same day of his returns home, Ginny helps with the prep by sourcing ingredients from Huber’s, Culina and Meidi-ya. When they’re really strapped for time, Richard throws together a quick shabu-shabu.

“Richard is very particular about his produce,” Ginny says. “He loves these hard-to-find ingredients like the mushrooms we’re having tonight. For him, carrots can’t be regular carrots!” She laughs.

Tonight’s dinner, however, is a cosy sit-down affair. Clinton and Tina arrive with two bottles of red wine, choices that Richard has asked Clinton to “baffle him” with. “I never go to any event empty-handed,” says the affable Clinton. “Richard has great champagnes and aperitifs to start the evening, but I know he and Ginny like their big red wines.”

The star of the evening is a bottle of Boscarelli Nobile di Montepulciano 2009, described by Robert Parker as having “firm yet well-integrated tannins” that “support an expressive core of sweet red fruit”. “It’s perfect with the beef,” Clinton says.

Already, two of the three Wiluan children — Kristian, seven, Ryan, five, and Isabel, four — are showing signs of taking after Daddy. Kristian can cook scrambled eggs; Ryan tinkers in the kitchen. For this dinner party, he’s whipped up canapes of toasted rice crackers smeared with pesto for the guests. “He wants to be a Junior Masterchef,” says Ginny. “He tells me, ‘Mum, I have five years to train!’”

It’s a delicious prospect: Richard and his sons expertly cooking up a storm for the guests lucky enough to be invited into their home — we think it’s only a matter of time.

Good friends that we can interact with, and who enjoy good food — they must be appreciative of food and wine. To see someone enjoying my cooking gives me a boost.

Come here with the expectation of having a good time, and always an expectation of no timeline in terms of when the party ends. For me, the time after a meal, when we’re having a whisky on the terrace, for example — that’s the best time.”