We catch up with the Singapore Repertory Theatre MD and foodie to learn more about his upcoming stage productions as well as best food memories. 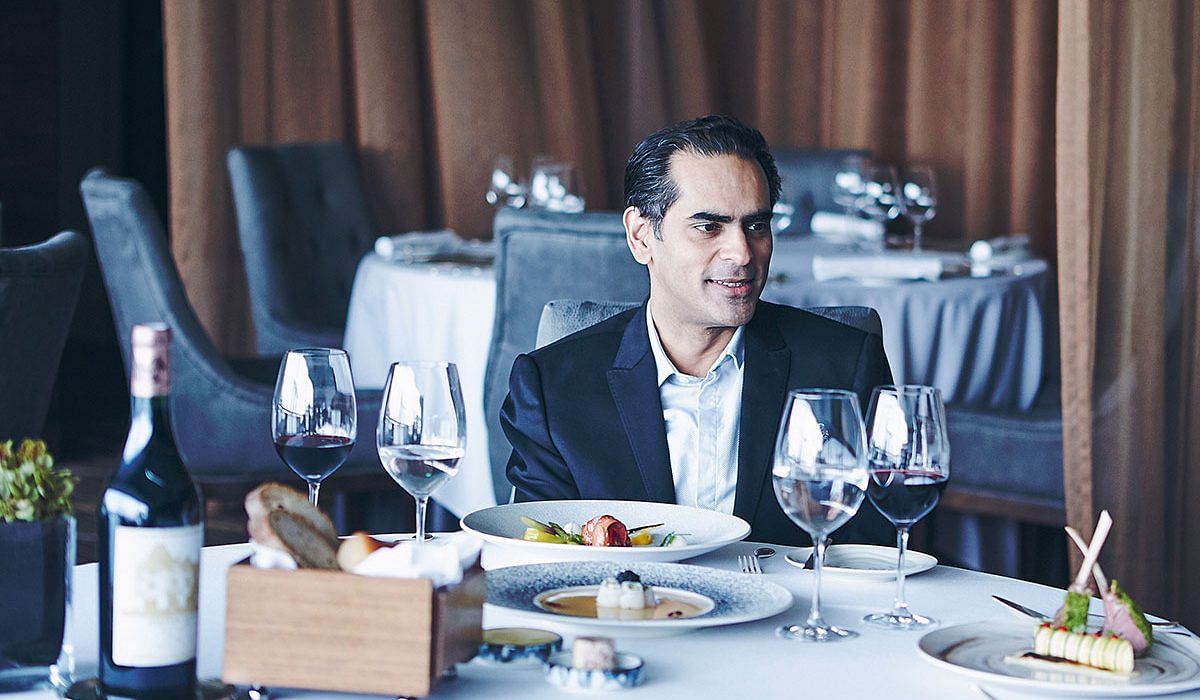 [dropcap size=small]Y[/dropcap]ou wouldn’t know it from his easy manner – old-world courtliness, quick laugh and languid conversation – but Gaurav Kripalani is a very busy and ambitious man. To wit: When he’s not treading the boards in hit stage productions like the recent Disgraced, he heads the much-laurelled Singapore Repertory Theatre (SRT) as its artistic and managing director. As he reveals over a recent lunch at Saint Pierre, his mission is nothing less than to position Singapore as a major arts centre in Asia, to be mentioned in the same breath as New York and London.

Congratulations, you’ve just come off a sell-out four-week run of Disgraced. But you look like you’ve lost a lot of weight.

I lost 10 kilos! Part of it was due to stress, but mostly because the play opened with me in my underwear. So, you know… I changed my diet and stopped snacking. I had a grapefruit for breakfast, egg whites for lunch, and five almonds for a snack. But it won’t take me long to put it all back on. I love food too much.

So, it’s back to your day job now.

Yes, and we have a lot on the Singapore Repertory Theatre calendar for 2017. In March, we’re putting on Constellation, whose premise is kind of like the movie Sliding Doors and parallel universes. What happens if you keep repeating a day, and each time you change small elements? Then in May, we’re doing Hand to God, another show that ran on Broadway and the West End. It’s about a Sunday schoolteacher who uses sock puppets in class and one of his students thinks he is the devil. It’ll raise a few eyebrows. And in August, we have our blockbuster musical, Forbidden City.

That’s quite a lot to stage, no?

Twenty years ago, it was quite easy to sell out a show because there was little else in town. These days at the Singapore Repertory Theatre, we’re competing with Netflix. So our challenge as an industry is to communicate a value proposition: that it’s worth the effort to get dressed, leave the house, buy a ticket that will cost more than a movie, and have a meal and spend three hours in the theatre. You want people to come out at the end and say, “You know, that was actually quite good. I really should go to the theatre more. I wonder what else is on.” Because, you’ll never be able to replace the live experience of theatre.

(RELATED: Where Crib Co-Founder and Foodie Marilyn Lum Had Some of Her Best Food Memories.)

What would you love to see more of?

People coming out of the theatre wanting to debate what they just saw, rather than where they’re going to eat! When we launched Shakespeare In The Park 10 years ago, rather than market it as “Come and watch a great play”, Singapore Repertory Theatre’s message was “Come and have an amazing picnic in the park and, by the way, we’ll put on a great play for you”. Boy, did that resonate with Singaporeans. If you make something “delicious”, they’ll come!

That applies to you, as well, then?

Oh yes. I am a huge foodie. Food plays such an important part in my life. I am one of those people who will fly somewhere just to try the food at a restaurant. One of the most amazing culinary experiences of my life was at Tetsuya in Sydney – everything was just so unexpected and magical. On my bucket list is San Sebastian, Spain.

Where does this love for food come from?

Well, my mother is an amazing cook, so I will never eat out at an Indian restaurant. You should try her sai bhaji, a creamy, spinach-based dish. No one else makes it like her. The thing, though, is that I have learnt nothing from my mother because I cannot cook to save my life, and I have absolutely no interest.

What is it about food that resonates so much with you?

I think it’s the experience. Eating is such a communal activity. It’s about sharing with people and talking about what you’re eating. And in Singapore, we’re really so blessed because there’s so much on offer. So much so, and this is a really terrible thing to say, that it takes a lot to impress us.

So, what restaurants measure up?

I am a big fan of Shoukouwa. It’s so intimate, the ingredients are fresh, and I always seem to be eating things I’ve never tasted before. I also love Mikuni at the Fairmont. Sin Hoi Sai in Tiong Bahru is another fave for its crispy fish skin, fish soup and fried moon noodles. It’s open till 4am, which is great if you’re in theatre. You know you’ve been partying too hard when you show up and it’s closed.

Is there anything you won’t eat?

Well, I used to love instant noodles and fast food burgers. But, as I get older, I’m appreciating the fact that there are only 168 hours in a week, so I am very careful about what I eat. It doesn’t necessarily have to be healthy. It can be crap food, but it has to be worth it!

The debut of Saint Pierre in 2000 introduced Singaporeans to a lighter, fresher and more accessible version of French cuisine, albeit one flecked with light Asian flavours. Over the years, owner and head chef Emmanuel Stroobant has continued to refine and evolve his oeuvre. His menu at his freshly minted One Fullerton lair eschews the buttery creaminess of classic French fare. Instead, it is infused with intensely flavoured jus, a global larder and artisanal vegetables. Some of the menu highlights include roasted Atlantic lobster with Normandy cider emulsion, micro chervil and organic baby winter vegetables, as well as roasted saltbush lamb rack with herb crust, wild mushroom cannelloni and lamb jus.