The personalities behind Onhand Agrarian, The Farmers, Mushroom Kingdom, and Edible Garden City share their triumphs and tribulations. 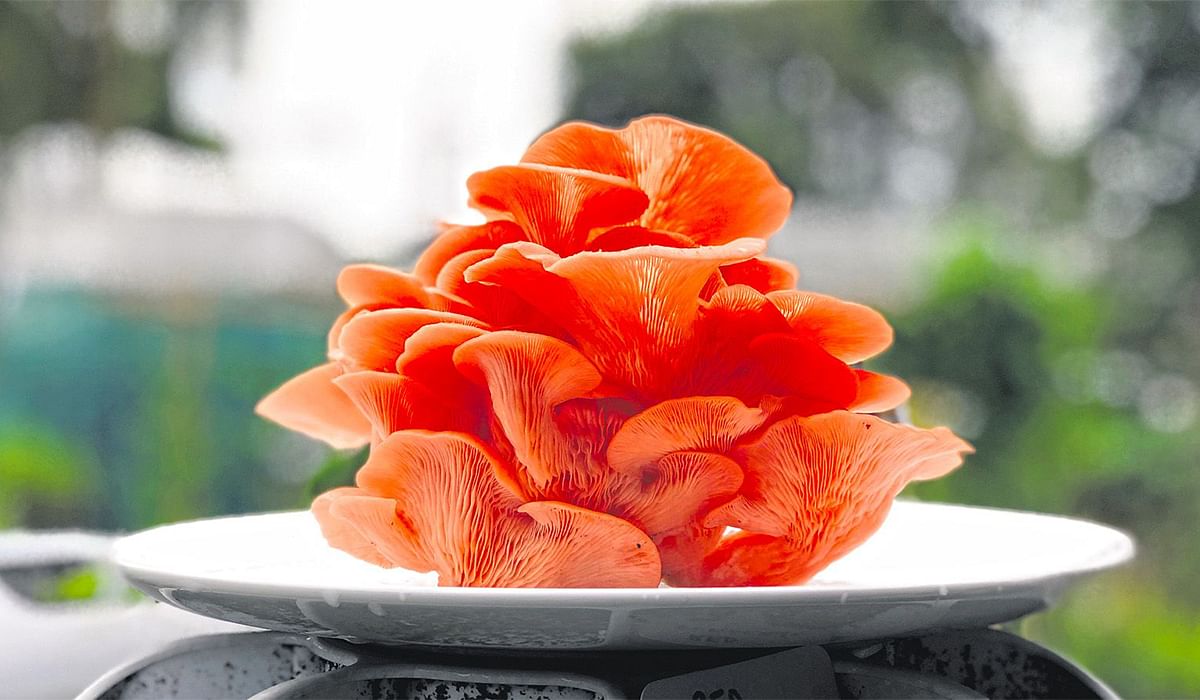 Don’t give Shannon Lim the excuse that there isn’t enough space in Singapore for people to become full-time farmers. Not when he produces up to 200kg of seafood a week from his cluster of fish ponds dotted around the city – from a former car park in Shaw Tower to a makeshift space hidden away in Dempsey Village behind an upscale butchery.

The founder of Onhand Agrarian started his fish farming business 10 years ago out of a love for nature and a great distaste for large fishing trawlers that destroy marine life as they literally dredge the oceans for seafood. He started out in his own backyard in Changi where he reared ornamental and edible fish using a lowtech, eco-friendly aquaculture system that keeps the water cleaner for longer than other fish farms.

This closed loop system is officially termed as an Integrated Multi-Trophic Aquaculture System (IMTRAS). Basically how it works is that waste from fish is recycled as food for crustaceans and in turn for other bottom feeders, which break down the waste into fertiliser for algae and other plants. In turn, they release oxygen into the water to nourish clams and other shellfish. But the bottom line is that he supplies fresh grouper, snapper, seabass, prawns, crabs, mussels, squid and cuttlefish to a steady clientele of subscribers who pay a fixed monthly amount for a mixed bag of whatever he harvests fresh from the farms.

The 32-year-old divorcee runs his business with about 30 volunteers who share the same views on sustainability. It’s tough work but being an urban farmer doesn’t mean living hand to mouth either. “The business is extremely profitable and sustainable as long as one has the sense to cultivate one’s brand and assets,” says the former financial planner.

(RELATED: How to live more sustainably in 2019)

Plus he gets a kick out of seeing “the positive effect that local farms have on families that we feed,” he adds. “It’s heartwarming to see grandparents connect with their grandkids when they wander about our Shaw and Dempsey farms, explaining how to hold chickens and dig for sweet potatoes.” Besides seafood, his farms also grow vegetable crops. The Shaw Tower farm, for example, grows endangered strains of corn besides bananas and root vegetables.

He’s definitely noticed an increase in urban farming, “with lots of new farms popping up” and reckons that the interest is driven by media coverage of people like him. “There’s also the fact that Singaporeans are quite desperate to get out of their office environments and get their hands dirty, especially the women.”

But what about the perception that farmed fish is not as good as wild-caught?

“The wild/farmed comparison has actually been one of the best things for us. When people try our fish, they’re immediately stunned by how there’s no ‘fishy’ taste because they’re just healthy fish grown in reasonably clean environments. Also, the negative perception most people come with helps set the bar so low that even our very average quality blows them out of the water.”

Although he’s ‘decades away’ from his goal of putting big fishing trawlers out of business, he says that aquaculture now accounts for more than 50 per cent of the world’s seafood. While the debate continues about the breeding practices in fish farms, Mr Lim is clear about his own, and he has the customers to support him on that.

Scott Farmer (front) and his wife Justine Ong (extreme right) of The Farmers.

The Farmers’ stall at a farmers’ market.

When your last name is Farmer, do you really have any choice about what your life-long vocation will be?

Scott Farmer holds a corporate job by day, but has gone the way of the land with his Singaporean wife Justine Ong. The couple are The Farmers – a small urban farm business that Ms Ong gave up her full time fashion job to concentrate on. The ‘farm’ is really Ms Ong’s parents’ home in Yio Chu Kang, where the couple – he is 31 and she is 27 – grow vegetables in the garden and on a patch of land outside the house. They grow all the ingredients needed for nasi ulam – a Peranakan herb and rice salad – the star dish of the cooking/farming workshops that they organise to teach people more about living and eating sustainably.

(RELATED: The Peak Next Gen | How Benjamin Swan of Sustenir Agriculture is spearheading sustainable farming in Singapore)

The duo had been burnt out at their respective jobs when they decided to quit in early 2018 and travel through Europe, the US and South America for nine months. They were taken by how good locally grown, seasonal produce tasted, and how the home-stays they stayed at had small edible gardens, which the owners tended to as part of their lifestyle. When the couple returned home, they commandeered Ms Ong’s parents’ 10 sq m garden and started growing herbs and vegetables by trial and error, since they had zero farming experience at the time.

For Ms Ong, who worked in fast fashion and “struggled to connect with the values of the industry”, their trip made them realise how “in Singapore, where we import so much, we’ve become disconnected from where our food comes from.”

Armed with their desire to live simply, spend time outdoors and be closer to their food sources, they decided that Mr Farmer would work full-time, while his wife focused on the farm. They run monthly workshops but are looking to run them more frequently after their upcoming wedding. Currently, the business – they also do private catering – is barely breaking even but they are not discouraged. “Scott and I both grew up in families where money and career were never really used as a measure of how good we were. We believe as long as you earn enough and live within your means, that’s plenty.”

As they build up their business (“the last few months has been very promising”), their aim is to make farming more accessible to people. “Our philosophy of growing is really to try and make do with whatever resources you have and what you can find. There are so many pockets of land around that we could use to grow edibles instead of ornamentals. Everybody has to eat. We should at least try to grow some of our food. It’s better for us and better for our earth.”

Inside the mushroom farm.

You may not have heard of Mushroom Kingdom but chances are you’ve been enjoying their chemical-and pesticide-free fungi since 2016.

Not only does the local enterprise supply fresh portobello, grey oyster mushrooms and black fungus to companies including Hai Di Lao, Prive and Creative Eateries, the brand’s own range of healthy shiitake snacks, Shroom Bites, can also be found in 7Eleven stores across Singapore.

But don’t mistake the founders – Philbert Khoo, Janson Chan and Jay Neo – as merely mushroom peddlers. The trio wants to change the way Singaporeans eat, one shroom at a time.

“Mushroom Kingdom wants Singapore to become self-sufficient in fresh food production. People should be able to have peace of mind when wanting to dine healthier, from having a sustainable, traceable source to a product that’s high in nutrition at an affordable price,” explains Mr Neo, who doubles as the chief marketing officer.

He explains that the company is doing a lot more farm-to-table agribusiness (as compared to traditional farms). Rather than just focus on their produce, they understand that education is essential for people to start eating right – for themselves and the environment.

Their offerings include the My Mushroom Garden grow kit (S$17.90), for consumers to try growing their own grey oyster mushrooms in an eco-conscious manner. Made of rice bran, limes and corn husks, spores require only watering four times a day before sprouting a hefty bunch in 12 days. “We think this helps consumers understand that food doesn’t magically appear through a deliveryman or at the supermarket,” explains Mr Neo.

Besides hosting cooking classes and farm tours, they work closely with science teachers from local primary and secondary schools to construct mushroom farms on school grounds. “There, the next generation can see how mushrooms are grown and learn the benefits of incorporating them into their diets.”

But he feels that Singaporeans are still far from growing their own food due to the “convenience and cost savings by food providers and delivery services.”

But he says that a symbiotic relationship between businesses is the way to truly raise awareness.

“While it’s understandable that brands are not keen to talk about another as it’s extra expenditure on their part, everyone will benefit if we featured each other’s strengths. And we walk the talk. We design ads and videos for eateries and shops carrying our products. By highlighting their brand story as well as ours, we aim to reach and inspire more people.”

The team at Citizen Farm, one of EGC’s offshoots.

EGC’s ‘Summerhouse’ at its farms.

To date, Edible Garden City (EGC) has designed, built and maintained about 200 food gardens. The latest of which is Funan’s rooftop garden that doubles as an actual farm for NOKA by the Spa Esprit Group, making it their second collaboration after Open Farm Community.

“Farm-to-table is a great way to connect city dwellers with what we do and get them interested in urban farming in Singapore,” explains Sarah Rodriguez, the marketing and PR manager.

On a tour of the 5000 sq ft garden, she highlights the many pesticide-free produce, such as Okinawan spinach, purslane, red leaf hibiscus and ulam raja, growing in the garden terrace and climate control chambers refurbished from shipping containers. They are even attempting to cultivate dragon fruit in the R&D section.

If, like many, you’re wondering how this relatively confined space can supply a 72-seater eatery, Ms Rodriguez says that there are two other production farms nearby – Queenstown (100 varieties) and Raffles City Shopping Centre (30 varieties).

NOKA’s setting is ideal to show Singaporeans that farms don’t have to be in far-flung locales or require huge, open spaces. The activation of under-utilised spaces has been the core of Edible Garden City’s operations (80 of its farms are atop buildings) and goes hand-in-hand with founder of Spa Esprit Group, Cynthia Chua’s ethos. “I love creating ways for people to live better and it’s important for me to champion the grow-your-own-food movement here,” says Ms Chua. Adds Ms Rodriguez. “We want to demonstrate how built up spaces have the potential to become productive land.”

While Edible Garden City reported an increased revenue of 20 per cent in the past year, she admits that for the farm-to-table scene to become more widespread, it has to touch on all types of cuisine and price points. “Currently, restaurants showcasing local produce tend to be up-market,” she says. “We’re looking to make local produce a staple in hawker centres, fast food joints and mom-and-pop eateries. The way to do so is to have more support for the local farming industry, allowing us to grow more varieties at a lower cost and enable everyone to have access to fresh, locally grown vegetables and herbs.”