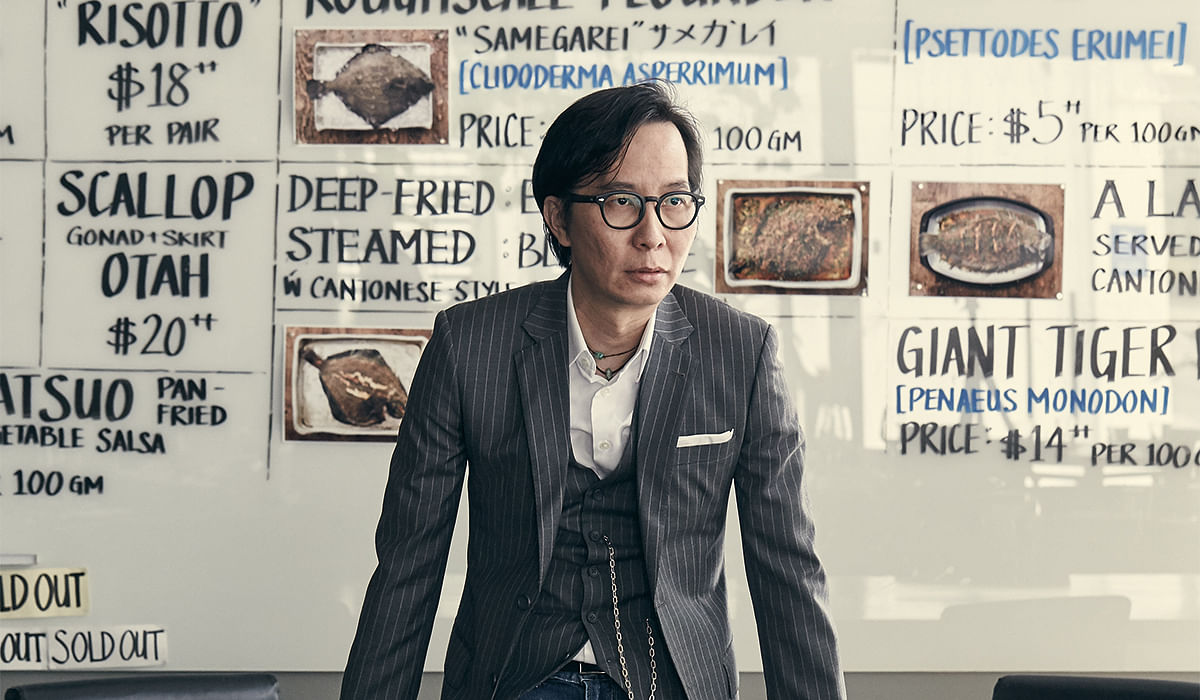 [dropcap size=small]H[/dropcap]is seafood restaurant is where tops chefs on this island unwind after a gruelling day, and is touted by industry insiders as the place to go for the ultimate prawn noodles. To be sure, six year-old restaurant Naked Finn – the first of its kind to celebrate seafood through stripped-down, contemporary dishes – does not have gleaming Michelin stars or a place on international rankings. It has something better: The stamp of approval and unwavering support from those in the know.

The man behind it, Tan Ken Loon, is an unlikely restaurateur, with an education in fine arts and a previous career in IT. Yet, he manages to pioneer change within the F&B industry – perhaps in a way only one with the clarity of being an “outsider” can.

Last year, he created Magic Square, a year-long pop-up that will end this month. Designed to give three young Singaporean chefs the opportunity to helm a restaurant, the project garnered not just the attention of diners, but also the chef community. Many a prominent name in the local fine-dining scene are regular customers. Hideaki Sato of Michelin two star Ta Vie in Hong Kong even took time out to mentor and cook with the budding talents.

“All my life, I’ve had to fight for my place in the world,” says Tan, analysing his passion for developing talent. “Growing up, I did not come from a privileged background. And as a grown-up with a fine arts degree majoring in painting, I practically have no relevance to the world today.”

While he had to pull his weight and more to succeed, he did get a little kindness from people who gave him their time of day. One of them, a customer of a little Apple retail shop Tan set up at Wheelock Place when he was fresh out of school, was a head at a bank. He took Tan out for coffee to dispense advice, as the latter had lost money with the shop and wanted to set up a dot.com business. “We may no longer be in contact, but I always remember what he did for me.”

Now, he plays the role of Big Daddy across his restaurants: taking staff to the gym, going for lunches and picnics on days off. The restaurant’s mixologist, Wijaya Irawan – who has been with him since he started bespoke cocktail bar Klee 11 years ago – is labelled “son” on his phone. He enjoys an enviable staff retention rate of 80 per cent – unusually high in an industry known for staff who think nothing about job-hopping for a wee pay increment.

His attitude towards developing people goes beyond keeping them in their jobs. He has no qualms about expanding the business not so much for profitability, but simply to create an avenue for career progression within the group. And, putting his money where his mouth is, he sunk $60,000 of his money to set up the first iteration of Magic Square. And Tan is invested in it in more ways than one; he sets the creative parameters, powwows with the chefs, and sits down to taste-test the food experiments. There is clearly emotional commitment too, with a fiery incident involving a flying chair, an injured limb and bruised egos. Furthermore, cool as it may seem, Magic Square is designed to be financially sustainable rather than profitable. Altogether, it’s a better idea to just call it a day after the year is up.

But, of course, he is doing the exact opposite.

(RELATED: How three chefs are forging their own paths)

He is currently looking for a new venue for phase two of the chef incubator – all while recruiting new talents. And this time, he is seeking to put together a team of female chefs.

“Magic Square was never intended to be a platform just for male chefs – one thing led to another and we ended up with a ‘boy band’,” says Tan.

While the platform had guest appearances from a few female chefs last year, he decided that he had to consciously go out and look for top female chefs – even if that by itself is a challenge. “There are fewer female chefs in the industry, just going by pure numbers,” he says. “And most of them tend to specialise in pastry, than work in the hot kitchen.” Only one of the four spots has been filled thus far, by 29-year-old Lai Sook Yi, previously sous chef at one-Michelin-star Nouri. And time is running short, with the project due to be launched by June this year.

But Tan is pressing on, for the mission of Magic Square goes beyond developing people – he also wants it to have a catalytic role in developing Singapore’s food culture. “The truth about Magic Square is that, although it is a platform for the chefs to develop, it is actually a discussion about what’s next for Singaporean cuisine,” he says. “Everybody is talking about hawker food – and rightly so, because it is amazing. Then you have Willin (Willin Low of Wild Rocket combines local and Western ingredients), Han Li Guang (of Labyrinth, which focuses on local ingredients) and Malcolm Lee of Candlenut who lifts traditional cuisine by tapping on technological advancements. But what’s next?”

To reinterpret hawker food is all too easy. “I want our young chefs to dig into their own food memories, combine it with their Western training, and create something that resonates with them and with local diners. That is what makes our products at Magic Square interesting – and makes people come back.”

“I want our young chefs to dig into their own food memories, combine it with their Western training, and create something that resonates with them and with local diners.”

He makes reference to what is known as Nordic cuisine today. “Fifteen years ago, when I was working for Nokia, Nordic food was boring. But now, people are going to Copenhagen specifically to eat. How do we make Singapore a true food destination in the next five, 10 or 15 years? How do we continue with the culinary evolution, and develop a distinct, contemporary Singaporean cuisine that is represented by Singaporean chefs?”

“We have a lot of amazing local talent, but most of them are working for French kitchens and for big names. We need them to be brave enough to come out and take Singaporean cuisine to the next level. We need to give them space, money, technology, equipment to explore and refine their ideas and, hopefully, they will come out, work for big names overseas and come back ready to open something that is their own – that is the true purpose of Magic Square.”

(RELATED: Why elevating Singapore cuisine is so difficult, chefs weigh in)