Personal butlers and on-site chefs are but some of the services one can expect from these exceptional glamping outfits. 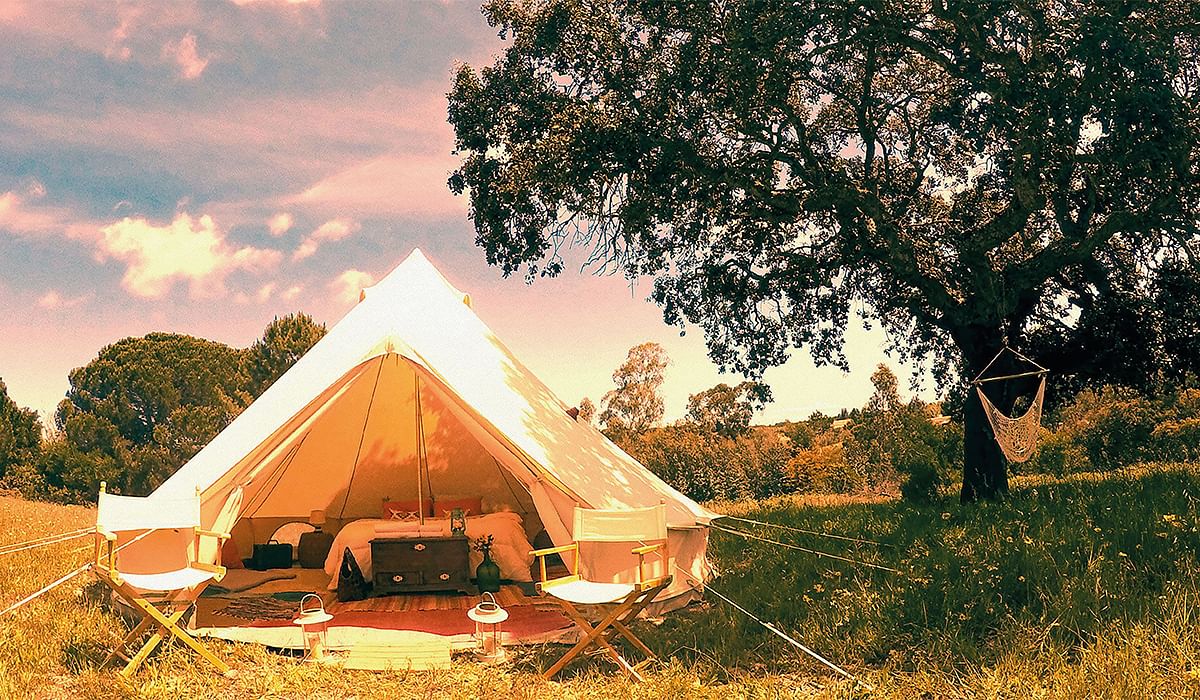 [dropcap size=small]S[/dropcap]ome of the world’s most beautiful places aren’t easy to access. Often, the fact that they are remote and untouched by human development is exactly why they are so beautiful: nature in all its pristine glory.

Imagine being able to stay on a heavenly beach, not another trace of civilisation in sight, and having exclusive access to the world’s biggest gathering of predators (during the sardine run) or the calving of the Southern Right Whale. Or picture yourself star-gazing in the Atlas Mountains at a location so far from man-made lights that the Milky Way dominates the night skies in a way that we’ve almost forgotten.

And to do this, you don’t need to rough it in flimsy tents and never- quite-warm-enough sleeping bags, or endure dinners of powdered potato. Instead, sleep on real beds with Egyptian cotton sheets and goose down pillows, and enjoy exquisite meals, clean loos, and tea brought to you each morning by your butler.

Being able to immerse yourself in some of the world’s most beautiful natural environments without having to give up the comforts of a luxury hotel is now possible, with a growing number of travel and events companies offering pop-up glamping – luxury camping sites set up for a limited number of nights.

Unlike a hotel, a tented camp can be set up almost anywhere.

BED AND BREAKFAST
Guests of Terra Glamping can enjoy nature, along with a personal butler and chefs on-site.

MATTRESS B&B
Forget the blow-up cushion; the tent accommodation by Terra Glamping is as beautiful as your home.

“We find unbelievable land that looks like a national park, and work with the owner to create our pop-ups. It’s like setting up your own private resort in a garden of Eden,” says David Levine of New York-based Terra Glamping.

Locations may be remote, undiscovered, or privately owned, making them truly special to experience. Terra Glamping, which focuses mainly on sites in North America, once set up luxury tents in the vineyard of director Francis Ford Coppola’s winery in California.

“The winery was releasing a new wine and we wanted to really wow the journalists who were going to taste the new release. Being able to sleep right there in the vineyard, without having to give up any comforts, blew everyone away,” says Levine.

Pop-Up Camps SA is a South Africa-based company that, after 25 years of developing and managing private game lodges, now specialises in luxury safari camping. It sets up camps in wilderness locations across South Africa, including in Dinokeng Game Reserve, which is home to the big five of lion, leopard, buffalo, rhino and elephant, and in a private wilderness area in Baviaanskloof Mega Reserve with game drives to see black rhino and the chance to splash about in natural rock river pools.

But some of its most unique camps are set up around natural spectacles that take place at sea.

“Our Wild Coast pop-up camp, which takes place during June and July, is designed to be the perfect accompaniment to the sardine run – a natural phenomenon which is well known internationally – while our Southern Cape camp during September coincides with the calving of the Southern Right Whale,” says Wayne Pritchard, managing director of Wilderness Explorer, which arranges the camps.

“Other than the canvas wall between you and the wilderness, there is absolutely nothing that separates us from a regular hotel. We may find difficulty in accommodating some extreme food allergies but, otherwise, basic dietary limitations are no problem,” says Pritchard. “Having said this, we think that everything separates us from a regular hotel. This is because while our camps offer levels of luxury not often seen in South Africa, we take accommodation to naturally beautiful locations, something a hotel can’t do.”

“OTHER THAN THE CANVAS WALL BETWEEN YOU AND THE WILDERNESS, THERE IS NOTHING THAT SEPARATES US FROM A REGULAR HOTEL.”

Tuck in and disconnect.

Today’s luxury tents can be nothing short of showstopping. When it comes to pop-ups, especially for private events such as weddings and family holidays, the sky is the limit when it comes to luxury and customising the design.

“The comment we get most from our guests when they first walk into their tent is, ‘Wow, this is nicer than my apartment!’” says David Levine of US-based Terra Glamping. “We use only beautifully designed tents with a luxury aesthetic, and amenities include a down comforter, dresser, side table and rugs. It’s like a beautiful boutique hotel room, but right in the middle of nature.”

The Nomad Pop-Up Hotel in Portugal sets up luxury camps for private events, including weddings. “Many people are fed up with monotonous and repetitive events. But all you have to do is provide us with enough open space for our pop-up, and our collection of stunning, fully equipped cotton canvas bell tents and our elastic and flexible event tents can be set up and tailored to your bespoke needs,” says Tom Fisher, head of marketing
and cross media at The Nomad.

But what pop-up glamping tents are unlikely to offer – and this is perhaps one of their biggest draws – are screens and other technological devices.

“There’s a rapidly growing disconnectedness, if that’s the word, that is gripping many people, with too many devices and families being distracted and consumed by screens of all sizes,” says Wayne Pritchard, managing director of Wilderness Explorer, which arranges pop-up glamping camps in South Africa. “These same folk are living increasingly hectic, and demanding, urban lives, and so the appeal of a luxury tent is not about the canvas but everything around the canvas… it’s about not having Wi-Fi readily available, or even much by way of charging points.”

Unplugged, in nature, and under canvas: perhaps the ultimate appeal of pop-up glamping.

(RELATED: These technology trends are going to change your world, according to Silicon Valley experts)

The best pop-up glamping outfits can supply electricity in off-the-grid locations, as well as bring in fresh water where there may not be plumbing, and delicious locally sourced ingredients for meals. “We supply chefs, sous chefs, butlers, yoga teachers, hiking guides, naturalists, astronomers … whatever you might need and the location demands,” says Levine.

How a pop-up glamping site affects the environment is, of course, a big concern. Many companies have a strict environmental policy. The Nomad Pop-Up Hotel is a company in Portugal that creates luxury tented camps for music and art festivals and private events, including weddings.

“The Nomad is built on the genuine experience of nature, so it’s a given that sustainability and ecological values are two pillars of our hotel operation,” says Tom Fisher, head of marketing.

“We set up our glamping tents while hardly affecting the surroundings. We choose materials and construction techniques that have as little environmental impact as possible and focus on operating with a ‘leave no trace’ policy. We build without destroying, we do not chop down any trees or damage nature while operating, and we mostly use local suppliers for all our needs.”

Of course, being so close to the natural environment does sometimes mean interacting with aspects of nature that some guests may prefer to avoid. “Guest safety is a primary concern, of course, and we always take measures to keep wildlife out of our camps. If you get a bug in your tent, well, you are in their home, so this may happen. If that’s the biggest sacrifice you may have to make in order to enjoy exquisite natural surroundings in such a luxurious, 360-degree way, then that’s a price I’m willing to accept,” says Levine.