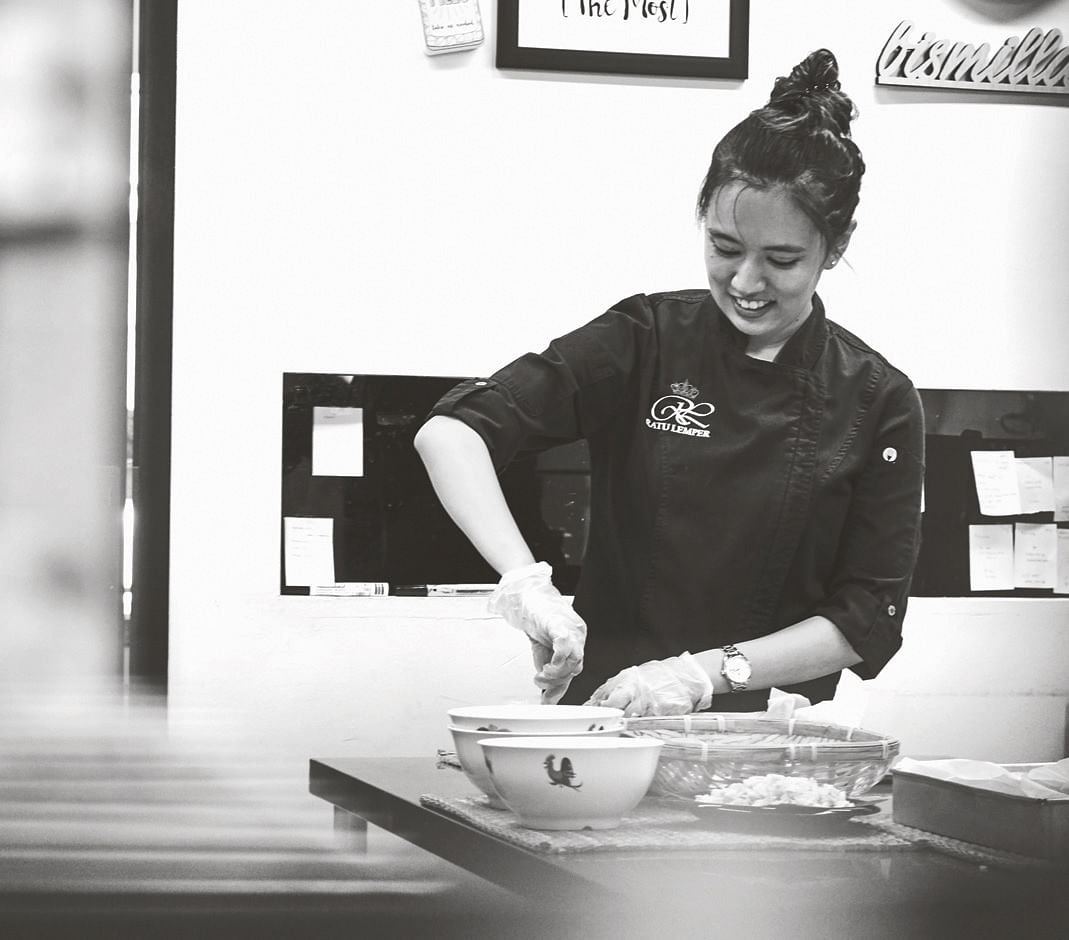 [dropcap size=small]A[/dropcap]liya Widjaya never thought she would be running her own business. The founder of Ratu Lemper came to Singapore from Jakarta, Indonesia, when she was just 12 years old. After her studies here, she went on to do her business degree in the US before returning to Singapore to work. In 2008, she left her job to care for her firstborn.

On a random day in 2015, Widjaya had a sudden craving for lemper – an Indonesian snack made of steamed glutinous rice filled with chicken and other ingredients, rolled up in a banana leaf, then steamed or grilled. She decided to try her hand at recreating the familiar flavours from her childhood.

“I was missing home terribly. Lemper was comfort food for me, but I had never made lemper before,” shares the 34-year-old. “I can’t remember how the first batch tasted, but I remember tweaking the recipe many times before I was happy with it.

“Initially, the sticky rice was too hard, too grainy, too salty, or not chewy enough. Or the filling was either bland, too sweet or too salty.”

After months of trial and error at home, the mother of two boys, aged four and ten, finally came up with a winning recipe – a fluffy rectangular “sandwich” of glutinous rice infused with coconut milk, filled with savoury spiced chicken, and wrapped in banana leaf. She also created an extra spicy chicken filling that packs quite the punch, and a full-bodied beef rendang filling.

These rectangular-shaped savoury bites require plenty of meticulous prep work and a large dose of patience.

The glutinous rice is soaked overnight and then steamed with coconut milk. Widjaya used to be able to steam enough glutinous rice for about 100 pieces at a time in her bamboo steamer at home, but now at the shop, the professional equipment can accommodate rice enough for 600 pieces of lemper.

Ingredients such as onions, garlic, chilli and lemongrass are blended into a paste and stir-fried with shredded chicken breast meat or beef. The spicy chicken filling takes about two hours to cook, and the beef rendang filling can take up to four hours, to ensure it’s tender and flavourful.

The cooked rice is transferred to a large tray lined with baking paper to be flattened and smoothed out into an even layer. The pressure applied has to be just right for the rice to keep its shape but still retain fluffiness. This forms the base of the lemper. Another tray of glutinous rice forms the top layer of the lemper.

A generous amount of aromatic filling is added to the bottom layer of glutinous rice and spread out evenly using a fork. This takes up almost a third of the lemper, and ensures that you taste the delicious filling in every bite.

The top layer of the glutinous rice is turned out from the tray and carefully placed over the filling. The entire “cake” of lemper is carefully removed from the tray. The lemper is then measured out and cut into neat rectangles by hand. It is traditionally rolled up in banana leaves, forming elongated parcels.

To prepare the banana leaves, each piece has to be meticulously wiped with a cloth, then cut into shape. Ratu Lemper assigns a staff member specifically to clean and cut the banana leaves. The rectangular pieces of lemper are then individually and neatly wrapped in them.

Widjaya explains that lemper sold in Indonesia tends to lean towards the sweet side, but as she loves spicy food, she decided to add chilli padi into the filling. Friends and family who tasted the lemper were impressed and encouraged her to sell them, calling her “lemper queen”, which inspired the name Ratu Lemper (meaning Queen of Lemper in Bahasa Indonesia).

Initially, she did not think anyone would be interested, but went ahead to post a photo of the homemade snack on her personal Facebook page. To her surprise, she received her first order in May 2015, and soon she was in business. As demand picked up, the insistence on preparing everything by hand from scratch took its toll on her. Even after her husband and elder son were roped in to help out, the volume of orders was still too much to handle for their home kitchen.

Eventually, she found a space at Baghdad Street, and opened in May 2016. These days, Widjaya runs the shop with a couple of assistants, and her husband helps out whenever possible.

Everything, from lemper to kueh such as kaswi kaya (made of kaya custard and gula melaka), is prepared in-house. Though plastic lemper wrappers are a commercially available option to replace banana leaves, Widjaya refuses to use them, to ensure the lemper would keep its distinct fragrance.

She shares that preparing the snack is not just about respecting traditions and appreciating the craft; above all, she wants to cook for her customers the same way she cooks for her family.

As a result, there are times when Widjaya and her staff suffer from backaches and numbness in their limbs from the tiring work, but this tenacious businesswoman would not have it any other way.