Watch Redzepi chomp down on veggies freshly ripped out of the earth, as he leads a foraging party through New South Wales. 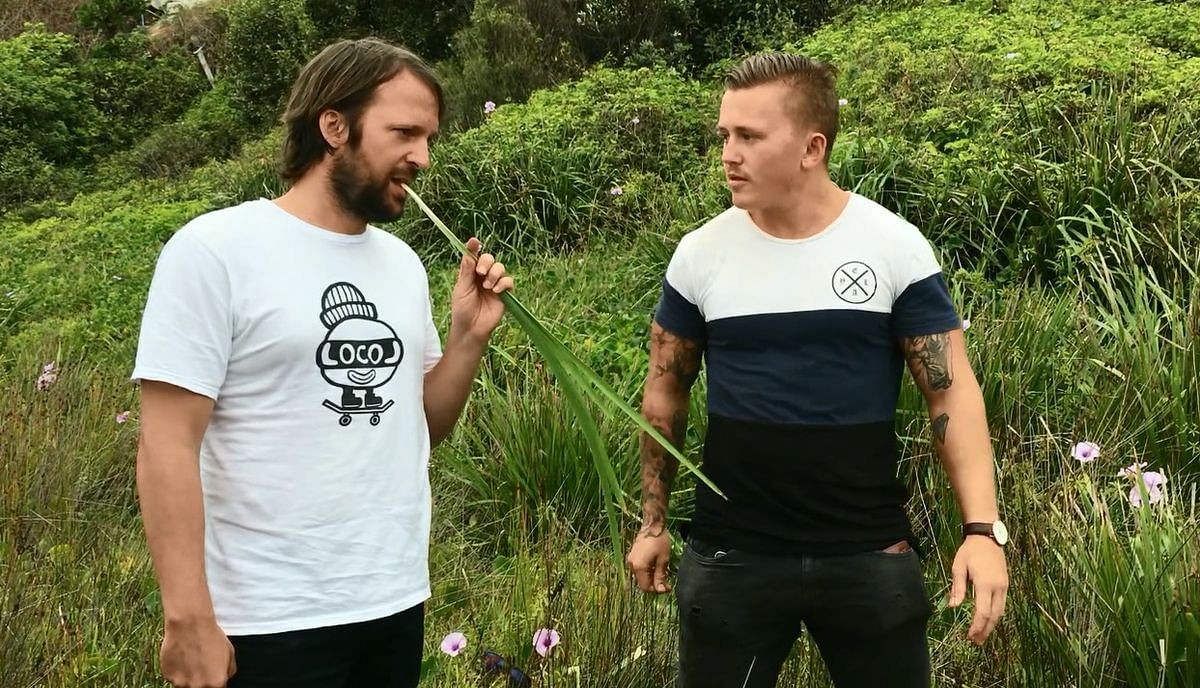 This is exactly what we get to experience for a day, trailing Redzepi on the remote Australian terrain when he closed his restaurant and moved here in January 2016. He brought 70 of his staff members to run the sold-out Noma Australia pop-up restaurant for 10 weeks in Sydney.

On an overcast morning, we journey to the South Coast and Southern Highlands of New South Wales to seek out ingredients with Redzepi alongside James Viles, chef-owner of two-hatted restaurant Biota in the Southern Highlands’ Bowral. For Viles who grew up in the region, this is his backyard. For Redzepi, it is a whole new universe.

We go off the beaten track and deep into the bush, where phone and Wi-Fi signals don’t exist. The two-hour drive snaking along narrow cliff edges and hairpin bends bring us to the secluded yet beautiful Wollondilly Valley River. Along the way, Biota’s kitchen crew pull their car over to the side of the dusty track to pluck wild blackberries. Our shiny black SUVs are blanketed in red dust by the time we reach the tranquil spot.

Viles tells us that we may spot a bevy of wildlife here – kangaroos, snakes and goannas (monitor lizards). The Biota team prepare a special lunch by the river, which includes succulent smoked trout brightened with finger lime, and kangaroo tartare partnered with the just-picked blackberries macerated in housemade vinegar.

“This looks amazing,” says Redzepi as he regales us with a colourful account of his trip around the vast continent. He is engaging, opinionated, chatty, funny and sarcastic. A solid storyteller. “There was this shellfish that I almost didn’t eat because it looked so disgusting,” says Redzepi, who rocketed to stardom more than 10 years ago with his progressive cuisine which focuses on foraged ingredients. He is sharing about his experiences with the Aboriginal folk living in Arnhem Land, Northern Australia. “But, honestly, it is, maybe, the best dish I’ve had in Australia,” adds the chef.

In between mouthfuls of raw kangaroo, Redzepi continues telling us about his encounter with the aforementioned bivalve. “We were in a mangrove. At low tide, you can walk on the mud. It was stinky and muddy. At various points, I stepped on something and out came a clam. It was 40 deg C, and the clam was living in hot, stinky mud.”

He recalls: “They throw the clam into the fire and the recipe is that, when it whistles, it’s ready. I thought that was brilliant: The food actually sings to you when it’s done. When they opened the clam for the steam to come out, it was still pretty smelly. It was big and bulging out of the shell. They didn’t really wash it off and I was really sceptical. But they were all looking at me and I thought, there’s no way around it.”

To his surprise, the clam was naturally sweet and perfectly cooked with a hint of smokiness and flavoured with its own briny juice. “It was taken out of the mud six minutes before and put in the fire to cook for about three minutes. It was a big mouthful but it was delicious.”

There in the wilderness of North-eastern Australia, the friendly natives prepared a variety of indigenous food for the curious chef to sample. “I had turtle which was very delicious. And kangaroo tail cooked in the skin and underground – almost like sous vide. They broke open the skin to reveal the juicy flesh, and scraped the meat off with a shell,” reminisces the chef.

He notes: “You need to go to places to look at how they do things. Japan was incredible (Noma staged a pop-up at Mandarin Oriental Tokyo in early 2015). They have winter almost like in Denmark, unless you go to Okinawa. We have similar landscapes and seasons but different cultures. In Japan, it’s like being on the moon, in terms of culture. In Australia, the cultures are similar but, in terms of the landscape, it is like going to the moon.”

Redzepi affirms that his encounter with the Aboriginal people is one of the biggest inspirations for how he cooks food in Australia. “They just eat the food in its element – from the ground or scraping meat off with a shell of sorts. In the West, we have the habit of adding and adding and adding. This experience has inspired us to refine our cooking for Australia. Using things that are very, very pure. We’ve tried to apply this in the kitchen – that is our main inspiration.”

Earlier in the day, we met Redzepi at windswept Shellharbour. “Look, it’s like a garden in the wilderness. It’s amazing how you can pick these plants, yet they’ll continue to grow,” said the chef, when he saw wild vegetation blanketing an area by the sea. “You can’t do that to a cow!” he quipped.

Viles and Redzepi, along with 23-yearold chef and Noma Australia’s forager Elijah Holland, led our small group farther out to the edge of the rocky foreshore. It was like a show-and-tell session out in nature. They picked up sea plants and succulents washed ashore, and told us how they would consider using those wild edibles in their menu.

There was a host of coastal species like sea coriander, sea lettuce, an edible green algae that grow in abundance, Marsh pennywort, an aquatic weed with small circular green leaves that cloak marshes or muddy areas, as well as the leaves of the hardy long leaf mat rush. Holland used his small knife to cut some of those long leaves and passed them to Redzepi who proceeded to chew on the base.

“It’s crunchy and tastes a bit like the heart of palm and water chestnuts. We are serving this in the restaurant,” he said. The chefs picked up a string of Neptune’s Necklace – a species of olive-brown seaweed found in Australia and New Zealand. Commonly found in rock pools at mid-tide levels, the hollow oval-shaped “beads” are threaded by a short, thin stalk. When popped in the mouth, they taste briny.

Back at the beach, Biota’s chefs have shucked oysters for us to snack on. They have also prepared plump strawberry clams and creamy sea urchin on flat bread to fuel our stomachs before we head off to our next destination. Before mid-day, we drive up an escarpment and take in the lush cool climate of the sub-rainforest environment.

We finally reach Pecora Dairy, the only artisan sheep’s milk dairy in the state. Owners Michael and Cressida McNamara who make the cheese themselves share with us their gentle process in sheep farming. We taste a range of fresh and creamy sheep’s milk cheese and yogurt, before trailing the chefs to hunt for more native plants. At the banks of the stream, Holland discovers more mat rush leaves, which are “juicier and more tender”, thanks to the abundance of rainfall in the area.

Because of the dampness, leeches thrive in the area. Redzepi, in his trusty rubber boots, is oblivious to the bloodsuckers. The rest of us are busy trying to get rid of the parasites. All that does not deter the squad of tattooed chefs pulling and tugging at the huge plants to lug back to the restaurant in Sydney’s new Barangaroo waterside enclave.

When we ask Redzepi to give us a sneak peek of the dishes, he says with a smile: “You’ll get to taste them at dinner.”

Dinner of a lifetime

Two days later, back in the city, we savour a series of well-crafted dishes showcasing some of those foraged wild edibles at Noma Australia. A succession of seafood-focused dishes is seamlessly rolled out by Redzepi’s brigade of chefs. Prior to launching this popup, Redzepi had traipsed all over the country, in search of a spectrum of native produce to carve out the 12-course menu.

Much research and inventiveness have gone into the chef’s Antipodean creations. We tuck into abalone schnitzel flanked by colourful bush condiments. Cocooned within the crispy batter is juicy confit of abalone. The accompanying ingredients include Neptune’s Necklace whose salty beads pop in the mouth; finger lime, with its distinct citrusy caviar-like pulp; mat-rush; and an ancient bunya nut.

From the marron and magpie goose (a waterbird species found in coastal northern Australia) wrapped in a soft taco-like milk “dumpling” to pristine shellfish crowned with crocodile fat, most of the flavours are unfamiliar to my palate. Some taste strange. However, I have a better understanding and appreciation of Redzepi’s philosophy guiding the way he cooks and presents Australia on a plate. In a nutshell, he’s paying homage to the indigenous inhabitants who depend on these foods to survive.

“It’s been beyond what we’ve imagined,” says Redzepi, when asked what he thought of Noma Australia’s mammoth success. “We came here wanting to understand a bit more about Australia and its unique landscape and the diverse ingredients that come out of it, hoping to be able to cook something nice from them. We did not expect it to be the sensation that it has been here.”