Why demand for Chinese baijiu is rising in Singapore, and how to drink it

How this traditional Chinese spirit is becoming more popular in Singapore. 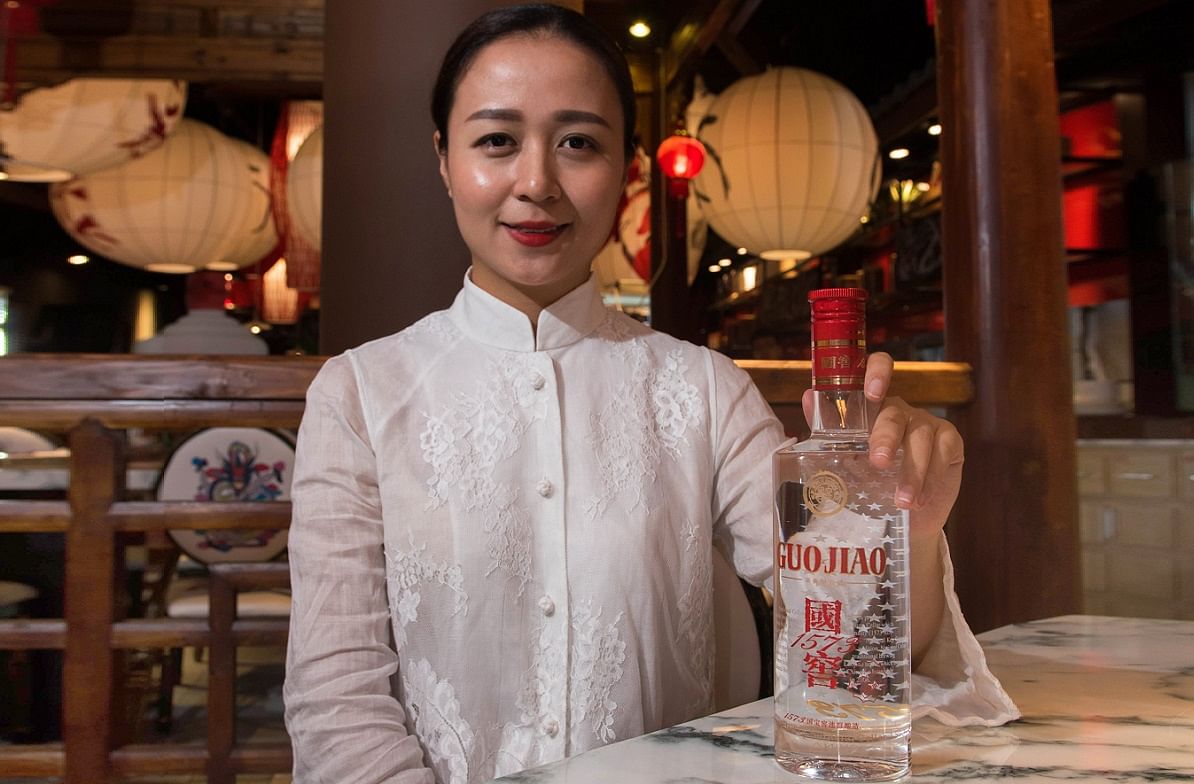 [dropcap size=small]B[/dropcap]aijiu, which means white liquor, is the eye-watering Chinese firewater that is among the most consumed spirits in the world.

These days, you might notice entire sections of the wine and spirits stores at DFS in Changi Airport dedicated to baijiu, including the famous Kweichow Moutai and Luzhou Laojiao, whose premium Guojiao 1573 baijiu was mixed in cocktails in hospitality suites at the recently concluded World Cup in Russia.

You can even buy baijiu off online grocery service RedMart, where another popular brand, Wu Liang Ye baijiu, retails for $250 for 500ml.

Baijiu, which is an acquired taste, may be more accessible now in Singapore, but the Chinese have been making and consuming it for more than 5,000 years.

Yet outside of China, little is known about the grain-based spirit made from sorghum, wheat or rice, and which is ubiquitous in the banquet scene. Served neat in little cups, the spirit is considered a lubricant for business in China, over which deals are made or broken.

HOW TO DRINK BAIJIU

In summer, it is drunk chilled at between 8 and 12 deg C, while in winter, the baijiu is meant to warm drinkers up.

While it is usually taken as a shot, she suggests savouring it differently.

• Relax: Calm yourself down and relax.

• See: Hold the glass 20cm away from you. The liquid should be clear and transparent, with no residue. When you swirl the glass, observe the delicate drips on the inside of the glass, which are called “tears of wine”.

The spirit is produced throughout China, with the Sichuan province accounting for the biggest proportion of production facilities and baijiu distilleries. With its regional differences, baijiu is categorised according to scent – namely rice, light, sauce and strong.

Rice aroma is the lightest of the four and made with glutinous or long-grain rice, and is typically made in the Guangxi province, from which a brand such as Guilin Sanhua originates.

Light aroma is made from sorghum and ferments in ceramic jars. The square-shaped bottle of Erguotou, mainly drunk in northern China around Beijing, typifies this style.

Sauce aroma gets its name from its bold, soya sauce-like flavour, which comes from fermenting the baijiu in underground pits in the south-eastern provinces of Sichuan and Guizhou. Moutai is the best example of this style.

Finally, the fiery strong aroma baijiu is considered the most popular of the lot. Made mainly in Sichuan, it is fermented with either single or multiple types of grain in underground pits and has a strong, pungent aftertaste. Famous “strong aroma” baijiu brands include Wu Liang Ye and Luzhou Laojiao.

Luzhou Laojiao (“laojiao” means “old cellar”) is among the biggest and oldest producers, having started in 1573. Using techniques and even brewing pits that originated in the Ming and Qing dynasties, the brand continues to make baijiu the same way 23 generations later.

Speaking to The Sunday Times, Luzhou Laojiao baijiu tasting master Xu Huan explains through an interpreter how its baijiu is made.

Organic red sorghum grown in plantations in Luzhou, located in south-east Sichuan province, is steamed and then fermented for about half a year, before being aged in one of three natural caves owned by the company. The caves, which can hold more than 10,000 tonnes of baijiu, are dark and kept at a constant temperature of 20 deg C and humidity of 85 per cent. The baijiu spends three to five years in the cave before it is blended and bottled.

“Now, it’s all systematic and we use machines to blend, so it’s no longer done by hand,” says Ms Xu.

The company produces about 3,000 tonnes of baijiu annually.

Baijiu’s growth in the spirits category has also led to greater interest from the big players. British alcohol giant Diageo is reportedly looking to increase its stake in baijiu brand Shui Jing Fang, from 39.7 per cent to 60 per cent.

“Baijiu has been made in China for thousands of years and it’s a drink that brings the Chinese population together daily,” says Mr Charles Oon, managing director of Singapore China Baiju, a company that has been distributing baijiu here for the past 10 years.

“But I hope that there will be a fairer playing field for Chinese liquor in Singapore,” he adds, noting that it is not yet as popular as wine, whisky and other spirits here, though it is readily available in major Chinese restaurants.

China is baijiu’s stronghold and Luzhou Laojiao’s Ms Xu is confident that the demand for it will remain consistent, despite major players from the wine, whisky and cognac world entering the market in the past decade.

“Luzhou Laojiao and baijiu have their own target audience around the world, so no matter how many other competitors come in, they’ll always stand high,” she says.