Why Japanese diners tip with origami art made from chopstick sleeves

In a country where tipping at restaurants is not the norm, customers are finding artful ways to show their appreciation. 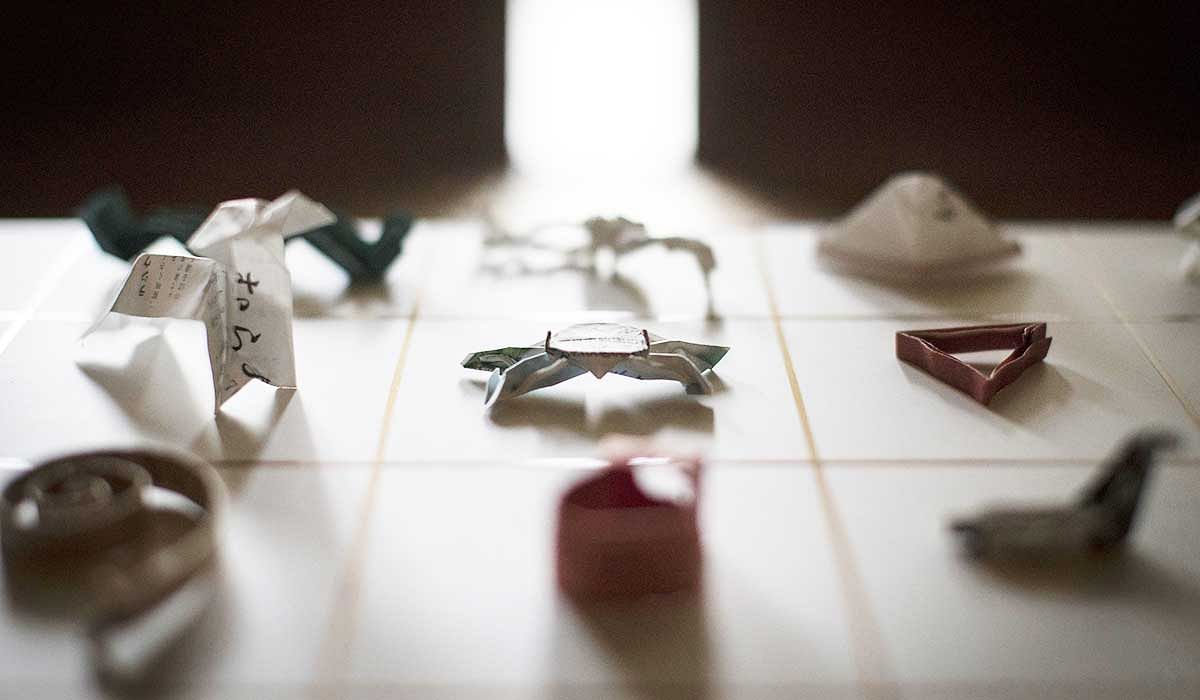 Yuki Tatsumi was waiting tables at an izakaya pub in Japan’s Kyoto when something on the table caught his eye – a chopstick wrapper folded and fiddled into an abstract shape.

It was the catalyst for a collection that now includes some 15,000 pieces of found “origami art” made by customers folding the paper sleeves that cover chopsticks at Japanese restaurants.

“The very first one I found just looked like a bit of junk,” 27-year-old Tatsumi admitted, but it made him think.

“What if this is a message for me from customers? Cleaning tables suddenly became something fun, just by thinking about it that way.”

Tipping at restaurants is not standard in Japan, but Tatsumi came to see the little folded paper pieces left behind by customers as a “Japanese tip”, and started watching out for different types.

He soon found there was a huge variety in the pieces left behind by customers, perhaps no surprise in a country where origami is a popular hobby and taught at schools.

(Related: Should you tip in Singapore restaurants?)

“I discovered many of them were folded in shapes of traditional good luck items in Japan, like a fan, a crane and a turtle,” he said.

“I also once found a table decorated like a fish tank, with paper folded like fish and seaweed.”

Enchanted by his discoveries, he decided to branch out and ask other restaurants to donate the pieces left by their customers to his collection.

In April 2016, he set off on a year-long road trip, asking hundreds of eateries from sushi restaurants to noodle stands to share their transformed paper sleeves with him.

He encountered some curiosity, and even reluctance, from restaurateurs bewildered about why he would want something usually headed straight for the garbage.

But eventually 185 places from northern Hokkaido to southern Okinawa promised to keep whatever they found and send them to him.

“Many of the restaurant owners that helped me told me afterwards that they now find it more rewarding than a real tip in cash,” Tatsumi said.

“It may sound hard to believe, especially for those outside Japan, but this way of showing appreciation that is unique to each person is something very pleasing.”

Now working as a researcher at an art museum in Kameoka near Kyoto, Tatsumi has around 15,000 pieces, each stored in its own small wooden box, like a piece of precious jewellery.

Many are simple, with diners just forming a makeshift chopstick rest out of the sleeve.

But others are elaborate, like a black and white patterned piece formed into a dress, or a blue wrapper twisted into a snake, with the folds following the patterns on the paper.

He sees them as an unspoken message between customers and their servers in restaurants, and worries that as automated service becomes more common in Japan, the “tips” he collects will disappear.

(Related: Why are some Japanese fruits so expensive?)

“When you walk into a restaurant and only deal with a machine, I don’t think you would make these items. I really think these are products created only when people communicate in person,” he said.

Tatsumi has already exhibited his collection in Japan, and plans to take it to art events in Paris and South Korea later this year.

He wants the collection to remind people to show appreciation and consideration for what they have.

“Japan is a very wealthy country, where you can find something to eat anywhere at any time, but I think people are becoming less appreciative of what they have or who makes the food,” he said.

“Cash isn’t the only way to show your warm feelings.”