It will be an offshoot of 67 Pall Mall, London’s first and highly successful private members’ wine club. 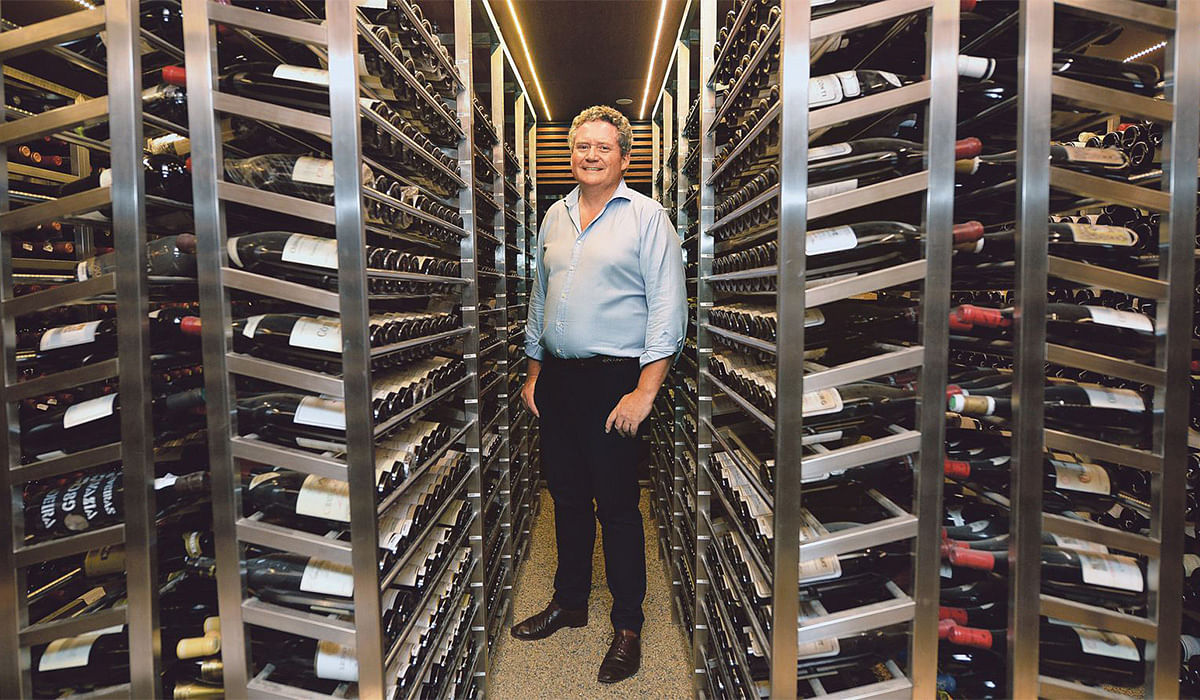 In another life, Grant Ashton was a city trader for 30 years, notably with the British financial institution Barclays, running the floor in the City and Canary Wharf. He also ran a hedge fund, but plans to keep doing that were derailed about five years ago when a couple of niggling problems in his personal life became too large for him to ignore.

One, he was a wine collector with more wine than he knew what to do with. So did many of his friends, who were also big aficionados with a habit of over-collecting. Two, he was fed up of going to restaurants and ordering the cheapest bottles on the wine list because he couldn’t bring himself to pay the exorbitant markup slapped on them. As a collector, he knew exactly how much they cost at retail, and seeing them marked up anywhere from 100 to 300 per cent left a bad taste in his mouth.

The birth of 67 Pall Mall in London and Singapore

A rendering of the wine tower in the Singapore club.

So, Mr Ashton, 52, decided to do something about it. He wanted to open a wine bar in Marylebone, but while scouting for a location he chanced upon the beautiful Grade II-listed building in St James, designed by Sir Edwin Lutyens, which had been empty for 15 years.

In 2015, that building became 67 Pall Mall, London’s first and highly successful private members’ wine club. Now with a list of 4,400 wines and 2,500 members, Mr Ashton – CEO and founder – is in Singapore to open the club’s first international outpost in the 27th floor penthouse of Shaw Centre in Scotts Road.

(RELATED: An inside look at 4 of London’s finest private member clubs)

The business model is that while restaurants need to charge what they do to pay for overhead costs like rent, labour and building costs, the subscription fees help to balance out some of the costs and allows the club to subsidise the prices of the wine. Food is priced like a normal restaurant, but the upside is that members get to enjoy it with wine that is priced at more realistic levels.

Mr Ashton and his friends expected maybe 600 to 800 people to join, but they ended up with 1,200 members even before the club opened. Membership has been growing even as the club has added more space and facilities.

In the same way that the 67 Pall Mall building ‘spoke’ to him, the penthouse of Shaw Centre also whispered sweet things in Mr Ashton’s ear when he first laid eyes on the 15000 sq ft space. Apart from being in the centre of town, it has a rich history as the home of film magnate Runme Shaw, who passed away in 1985. The apartment – with its amazing 360 degree views of greenery and the tops of surrounding shopping centres – was left empty for some 20 years before a spa operator took over for another decade. It gave up the space in 2017.

“I saw 20 places before this,” says Mr Ashton, who started coming to Singapore two years ago to scout for a location for the first overseas branch of the club.

He reckons that 60 to 70 per cent of the London club’s design will be replicated here but with tweaks to suit the local environment. One of the key features will be a wine tower holding 6000 bottles from a list that will feature 5000 different wines from 42 countries. “It will be the biggest wine list in Singapore, and possibly the biggest in Southeast Asia.”

Besides Singapore, other cities considered included Hong Kong, Shanghai, Paris and New York, but Singapore “won fair and square” after ticking off all the important boxes on Mr Ashton’s list of 25 criteria that included ease of doing business, logistics and wine storage.

Based on the London experience, he believes the concept will go down well with price-conscious Singaporeans. Membership will cost just S$200 a month with no joining fee, and for the first year, that will be for two people. There will be three Masters of Wine in residence to conduct classes, and 15 sommeliers on hand to guide you through the massive choice, especially the 1000 wines that will be available by the glass. At the same time, it will be a social place for people who want to come in and do a bit of work or meet with the five guests each member is allowed to bring in each day.

(RELATED: How private members-only clubs in Singapore are attracting millennials)

That it’s looking like a social club that’s much more affordable than say, 1880 or Straits Clan is not lost on Mr Ashton, who says that he is on good terms with the owners and plans to work with them – “the idea is to grow the pie, not shrink it,” he says, and adds that he is targetting mainly Singaporean residents rather than expats. The club will be financed by founding members putting in S$100,000 each, and he is confident of raising the S$10 million needed for the construction which will only begin after Chinese New Year next year. It is expected to open in September 2020.

In for the long haul

He’s well aware that such a major project is not going to reap profits soon. After all, 67 Pall Mall lost £1 million in its first year, and £400,000 in its second year before it started to turn a profit in its third and fourth year. “We will make money this year, and in Singapore, we will lose money in the first two years – it takes a long time to get the money back.” But they will be taking a 15 year lease on the Shaw Centre space, similar to London, which it has extended to 20 years.

It won’t end in Singapore, either, as the plan is to open six clubs, including London, by 2028.

Yes, there are faster ways to make money, especially for someone with so much market experience, but “it wouldn’t be so much fun”, says the man who was supposed to leave town on Aug 9 but is still around to manage things especially after word broke about the Singapore branch.

“I enjoy wine, and I enjoy the intellectual challenge of (dealing with) new things every day. The reason I do this is that I get to do something different every day.”