Yes, You can “Take-Away” These 3 Hawkers in Singapore

They’ll cook in your home, no problem. The Springleaf prata chef may even dance. 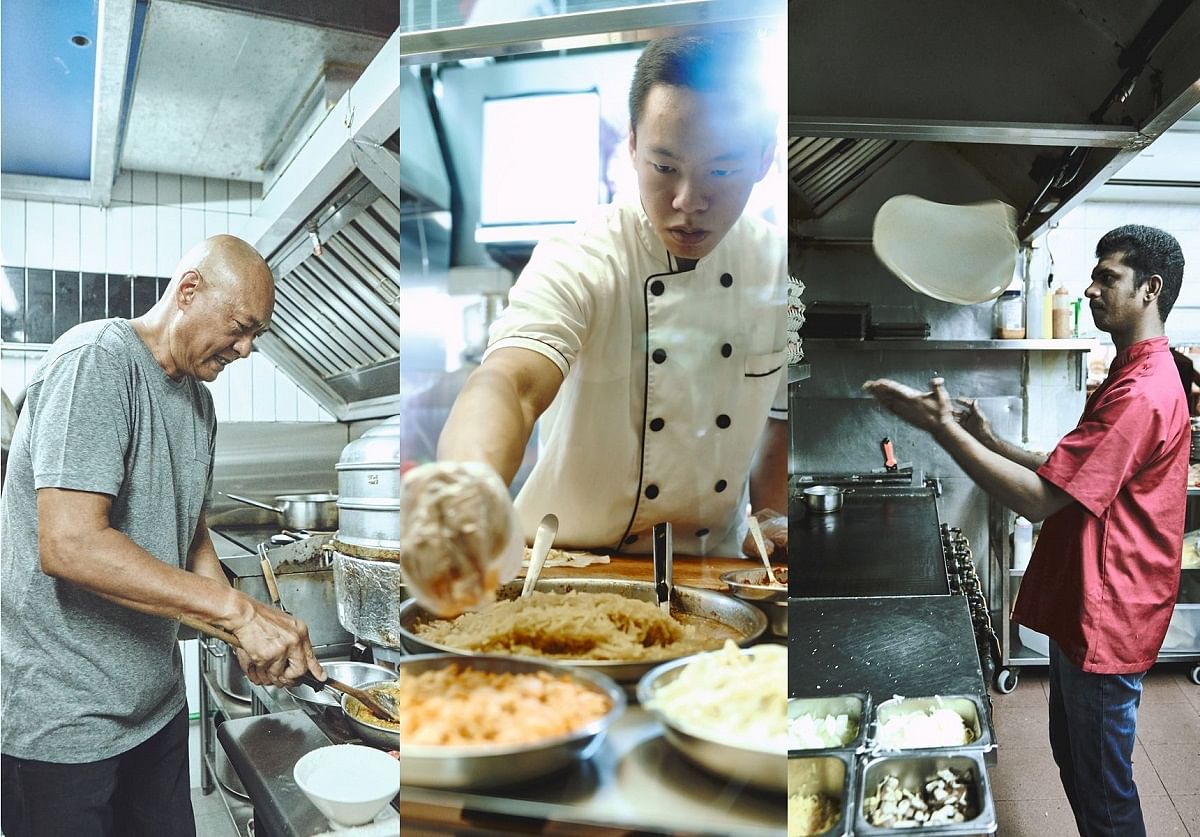 For your next party, bring a slice of the nation’s most authentic food culture to your home – and we don’t mean massive quantities of takeaway.

Damian D’Silva could possibly be considered the most exclusive hawker for hire in town. The owner of an eponymous stall in Timbre+, he is able to do only two home-catering sessions a month – nothing more. “It’s very time-consuming lah,” the 60-year-old says candidly. “I’m a one-man show and have to prepare everything by myself.”

With 17 years’ experience operating a gamut of concepts spanning catering company to casual fine-dining restaurant to gastrobar, D’Silva is happiest running a small food stall and doling out heritage and “lost” dishes both there and in homes. “It helps to spread the word about our culinary culture and, hopefully, allow it to live on.”

Two menus are offered for his private chef services, one focusing on heritage food and the other, “lost” hawker fare. The heritage food menu highlights traditional dishes from the five major ethnic groups of Singapore: Chinese, Malay, Indian, Eurasian and Peranakan; while the latter features hawker dishes based on mostly forgotten recipes, lost through the generations.

On the lost hawker fare menu, highlights include gai fan (Cantonese for “street rice”) made with char siew, shredded chicken and lap cheong, mixed with rice boiled with chicken stock. This was sold to labourers who worked the wharves in Boat and Clarke quays, but it fell out of favour in the 1960s. 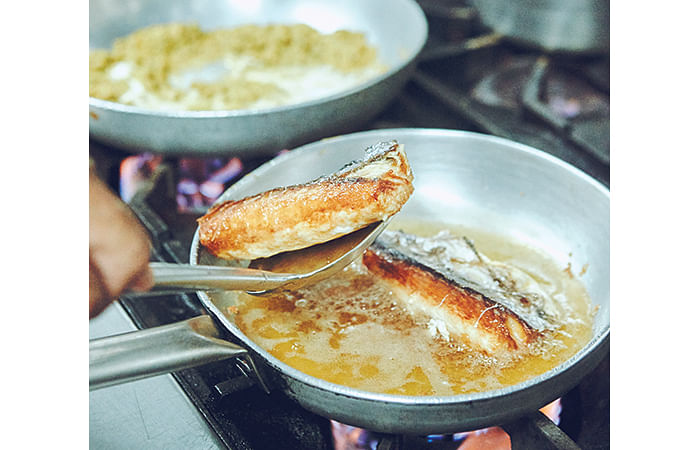 However, the claypot rice on this menu is what steals the limelight. It requires firing over a charcoal stove, and an outdoor space for preparation. He will cook the dish for a maximum of 12 persons because of the limited capacity of the vessel, which comes with a customised cast iron lid on which he places charcoal embers to allow the heat to penetrate from all directions. Even the rice he uses is not ordinary: D’Silva mixes old and new grains in equal parts, for a perfectly moist yet fluffy texture that isn’t too mushy.

“I’m trying to preserve the Singaporean identity. These are dishes that people either haven’t eaten before, haven’t eaten in a long time, or are not available at other eateries.” Think a Peranakan speciality of hati babi bungkus (pork balls wrapped with pig’s caul): a mixture of pork meat and chopped liver marinated with ingredients such as coriander, tamarind and vinegar, then steamed and grilled before being served with Chinese mustard leaves.

Even dishes that you think you know might taste different. D’Silva’s Cantonese-style loh kai yik (braised chicken wings), which takes three days to prepare, is cooked with red and white fermented bean curd, and red sweet sauce. Apart from chicken wings, other ingredients include pig’s kidney and liver, as well as cuttlefish and tau pok (deep fried bean curd).

Clients who opt for the heritage menu can choose to have dishes from one cuisine, or a combination of cuisines.

“My food will take people back to a time when their grandparents, uncles and aunties cooked on special occasions. I want to help revive happy memories,” says D’Silva.

Want an absolutely fuss-free popiah party? Let the owners of the popular Bee Heng Popiah at Newton Food Centre serve you in the comfort of your home.

Part of the fun of a popiah home party is the DIY experience of assembling your own turnip-stuffed roll. But, if you prefer not to go through the hassle, but still want to have them freshly wrapped, Bee Heng Popiah based in Newton Food Centre is the place to call.

The filling of its Hokkien-style rolls is freshly made at the stall and includes prawns and fish. They are best consumed on the spot. But earlier in 2016, its fourth-generation owner, Marcus Tan, introduced DIY sets after receiving numerous requests from customers. “Since it has garnered good response, we have started offering the popiah private chef service too,” he says.

For a minimum of two hours, Tan, or one of his family members, will go to your home to set up the preparation area, make the popiah, and even clear up at the end of the event. Just inform them beforehand of the quantity you would like, and carve out some space in your entertaining room to lay out the ingredients, utensils (such as spoons and strainers) and portable heating pads for the turnip filling, and – voila! – you have a live popiah station for your home party. Tan can even teach your guests how to wrap the popiah and, if they are interested, share about the work that goes behind its making and history of the recipe.

Tan says that every component of the popiah is made using the freshest ingredients, following the same traditional recipe that his great-grandfather Tan Choo created more than 80 years ago. “It is very time-consuming and labour-intensive but it is what makes our popiah unique.” 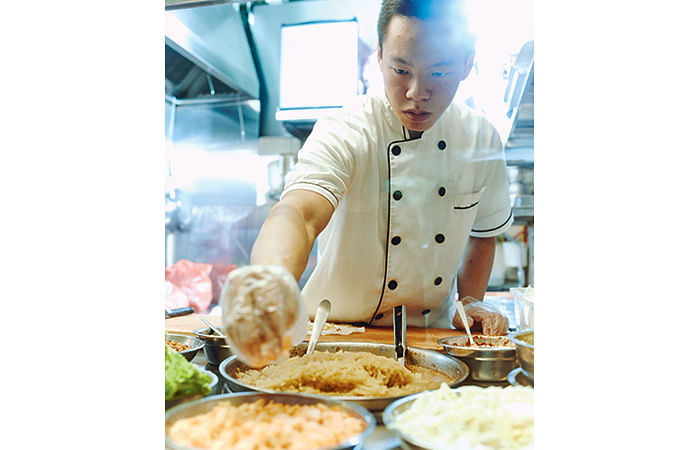 The 24-year-old joined his family’s business two years ago and the private chef service is part of his bigger dream to make popiah become an integral part of Singapore’s dining culture. “I hope one day it can become like pizza or cakes, which people think of immediately when holding gatherings.”

(RELATED: These 12 next-gen hawkers are shaking up the Singapore food scene.)

Hire a private chef from Springleaf Prata Place and he might even dance for you.

What accompaniments do you like with your prata? If you a hire a chef from Springleaf Prata Place for your next home party, he might throw in a dance performance, jiggling to whatever music is playing as he flattens, folds and flips freshly made dough.

This was probably the most “interesting” request by a customer since Springleaf started offering the service in June 2003, says owner Gunalan Subramaniam. Established in February 2003, the multi-outlet casual family eatery – with branches in Siglap, Upper Thomson and Upper Bukit Timah – specialises in Singaporean Indian street food. It is also the only Halal-certified caterer that offers the live station prata service.

“Everybody was offering the standard catering menus. We wanted to add real life to the party and offer something that differentiates us from the others,” explains Gunalan, 42. He seems to have succeeded.

Weekends for Springleaf’s catering arm are usually fully booked up, with up to 10 events at a time, while weekdays usually see two to three bookings. While most of them are corporate in nature, Gunalan says Springleaf also offers its services on a smaller scale for private functions.

“Once, a customer requested we cater for just 10 persons. So we designed a special menu of our more premium prata, which are stuffed with ingredients such as durian paste and crabmeat.”

Springleaf is also well-known for its “ultimate series of prata”. Examples are the Plaster Blaster, essentially eggs Benedict with prata; Murtaburger, or murtabak in burger form; and the newest, Salted Egg Prata, introduced in August 2016. Extra space is necessary only to accommodate the griddle and prata flipping table. Otherwise, the standard catering equipment is more than sufficient.

But there is more. If you plan to go full-on with an Indian street food theme for your house party, Springleaf can offer chefs who prepare teh tarik, thosai, satay, burgers, roti jala and kacang putih a la minute.

Reveals Gunalan: “It started as a special request for a corporate customer. Ever since then, others have asked for the same service. Manpower permitting, we will accede to their request. It is also fun to do events with more variety.”