Why you’ll continue to see Greek restaurants in Singapore

The food of the Mediterranean extends its culinary odyssey here. 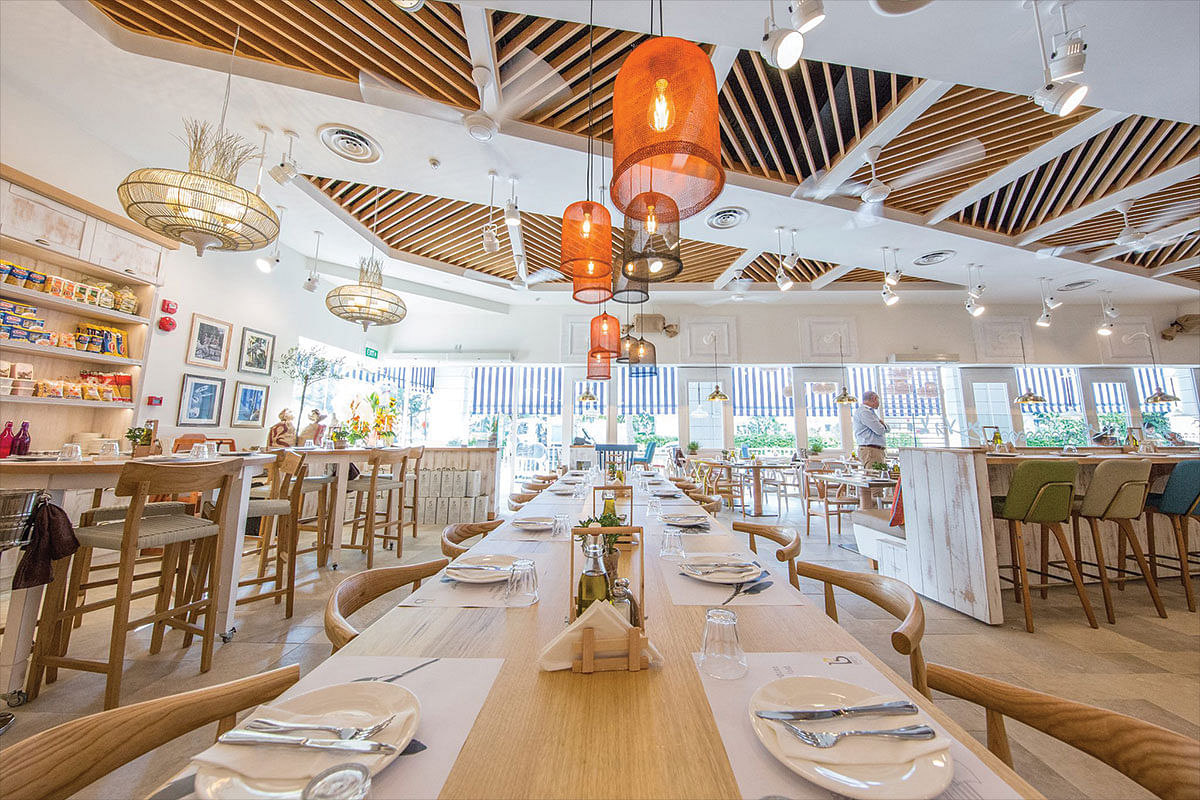 [dropcap size=small]T[/dropcap]he Greek restaurant community in Singapore is a small one – you can count them all on two hands. So it makes a big impact to the numbers when two new eateries joined the fray earlier this year, both opening within the span of two months.

“It’s difficult to open a Greek restaurant here in Singapore,” says Greek native George Kokkinis. “Not in terms of money or investors, but in getting the right passionate people and products. To bring authentic Greek food to Singapore, you have to source many products on your own because it’s difficult to find them through local suppliers. Plus, the prices can be very high because of the low demand.”

Kokkinis is the general manager of the new Greek taverna named Bakalaki, which opened last month at Tiong Bahru. The other new player is Ergon Greek Deli & Cafe at Suntec City Mall, which opened in April. The two join a small number of existing restaurants such as Alati Divine Greek Cuisine at Amoy Street, Blu Kouzina at Dempsey, and Mykonos On The Bay at Sentosa.

So what is Greek food, exactly? One possible way of understanding it is by comparing it with our local cuisine. As Andreas Kourouklaris of Ergon Greek Deli & Cafe describes: “We are culturally very similar with our eating habits in the sense that we see food as an opportunity for families and friends to gather together and spend quality time.”

However, that and our love for seafood is pretty much where the similarities end. He continues: “Greek food itself is quite different from Singaporean cuisine as it takes less preparation and highlights simple natural tastes, compared to the spicier food in Singapore.”

This natural flavour is why Blu Kouzina’s founder Gigi Tsakiris describes Greek cuisine as “heavily dependent on the sourcing of ingredients”, so high quality is important. He brings up the example of the well-known Tzatziki dip which is made up of three main ingredients – yoghurt, cucumber, and garlic, as well as a bit of olive oil and salt.

(RELATED: Restaurant of the Week: Alati on Amoy Street stays true to its Greek roots.)

Leong Khai Git, managing director of Alati, adds that Greek cuisine also has a big focus on seafood. He says: “I notice Greek cuisine uses a lot of natural products – for example honey is used as a substitute for sugar.”

He highlights that one of the dishes he hopes to offer in his restaurant is known as trahanas – wheat, mixed with either yoghurt or milk, and left to ferment and dry then broken into smaller pieces. “It has a nutty, slightly sour taste to it, and I once had a seafood version of it with saffron cooked like a risotto. It was mind-blowing. The use of a natural technique like fermentation to achieve new levels of flavour really showed the Greek expertise in treating their ingredients with respect.”

It’s because of this natural style of cooking, that Tsakiris strongly believes that Greek food will take off not just in Singapore but globally – because it fits in with global F&B industry’s trend towards health and wellness.

He says: “Four years ago, I told my parents Greek will be the next big mainstream cuisine, just like how Italian, French, Japanese, and Mexican became mainstream. I had just come from New York City, and in my last year I was amazed at the number of Greek restaurants that were opening. So I will not be surprised when this trend starts to influence Asia, as more people start to see the benefits of incorporating such a natural diet for their own health.”

When brothers Thomas and Georgios Douzis first started the Ergon brand 10 years ago, the idea was to consolidate traditional products from across Greece and create a global food brand selling their local products.

Now, they have over 300 outlets around the world, and an inventory of about 1,400 items. The newest outlet is a deli and cafe that opened at Singapore’s Suntec City Mall in April – their first one in Asia.

“I knew the brothers from the mid-2000s when I used to live and study in Thessaloniki. As a believer in the uniqueness of the concept, I got more involved and saw the potential for Ergon when I moved to Singapore in early 2016,” says Andreas Kourouklaris, managing director of the company that holds the franchise rights for Ergon Singapore, and who also heads the brand’s expansion in Asia.

He describes the food at Ergon as “authentic Greek cuisine with a contemporary and modern twist”. The authentic part comes from the fact that their dishes are made with Greek ingredients, but the menus are designed by a team of young innovative chefs back in the Ergon headquarters in Greece.

At the cafe, they offer mezes, spreads, salads, sandwiches, as well as a brunch menu that includes specialities like a Koulouri – a sesame seed bagel with poached eggs and Greek yoghurt (S$22).

The three faces of Bakalaki – general manager George Kokkinis, executive chef Spiros Palaiologos, and assistant general manager Christos Parlapanis – may all be born and raised in Greece, but they are no strangers to Singapore’s F&B industry. They have been working in restaurants here for at least four years.

Just last month, they banded together to open Bakalaki as a joint venture with another group of shareholders, who had approached them with the idea to start a Greek-styled taverna in Singapore.

“They were very passionate about Greek food and culture, so we discussed it and decided to bring Greece to Singapore with a better concept, better produce, and better service, in order to showcase Greek traditions through food and hospitality,” explains Kokkinis.

(RELATED: New food and drink events to check out: Beerfest Asia 2017 and The Singapore Coffee Festival.)

In order to keep their food authentic, 70 per cent of the produce they use comes directly from Greece, while the recipes belong to Chef Palaiologos, who has spent 20 years working in F&B.

The menu features highlights such as moussaka (S$25.90) which is a traditional baked casserole of minced meat, eggplant, potato and bechamel sauce, a variety of dips like a spicy feta cheese spread with Greek yoghurt and roasted red peppers called tyrokafteri (S$14.90), and of course, seafood platters featuring fried squid, prawns, octopus and different kinds of fish (S$118.90 to S$168.90).