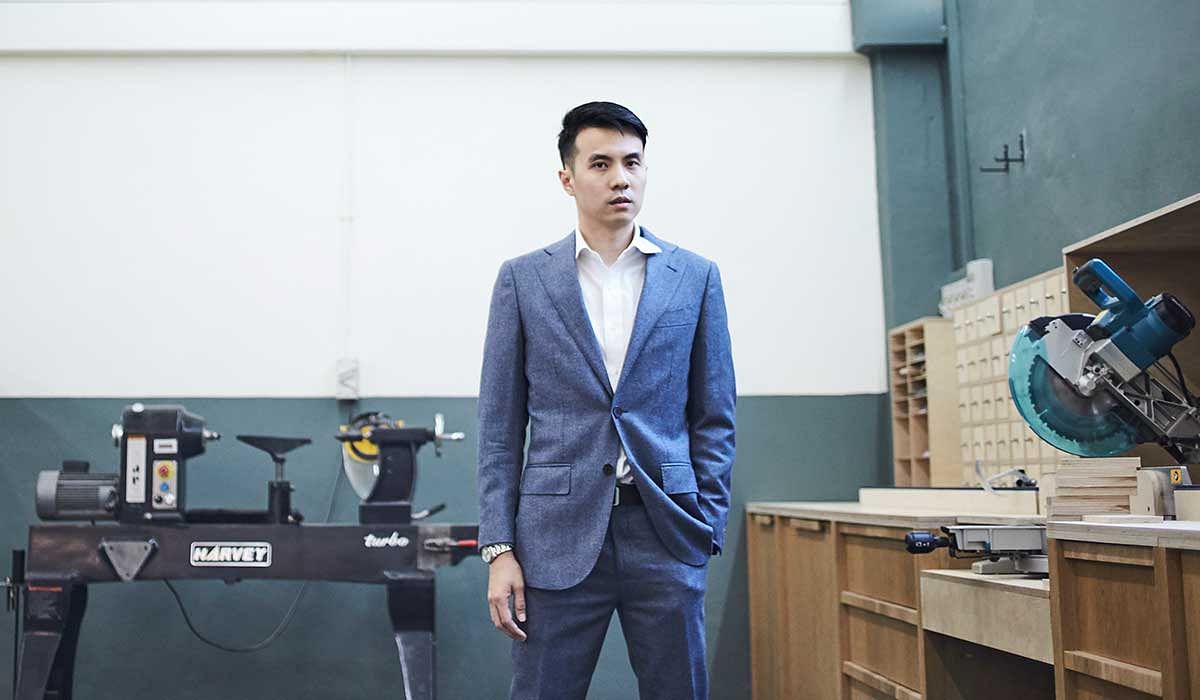 [dropcap size=small]B[/dropcap]arely five years ago, the Makers’ movement was practically unheard of in Singapore. Such jobs as leather craftsman, soap maker, or woodworker were regarded as dying trades.

So when Morgan Yeo said he wanted to take over the family’s carpentry business in 2014, after his father Roger was diagnosed with pancreatic cancer, the senior Yeo was “a little hesitant”. But the 31-year-old, who has a business degree from Singapore Management University, had a vision to reinvent the staid image of the carpentry industry in Singapore.

“For the last 40 years, carpentry in Singapore has been about nailing plywood with an air gun and sticking laminate over it so that the work is fast and efficient, and everything looks more or less the same,” says the soft-spoken Yeo, who wears a Rolex Datejust he inherited from his father to work every day. “I want to marry this efficiency with cool ideas and joinery.”

Besides rebranding the company’s name to Roger&Sons – a tribute to his father, who passed on six months after he took over – he turned to customised carpentry to differentiate their work. Since then, the company has created such bespoke creations as a periodic table display case for a scientist, and a solid walnut case to fit a rare rum bottle from alcohol giant Diageo.

Over the past two years, Yeo has seen a 25 per cent increase in sales. From a scraggly team of five – including three elderly carpenters who stayed on during the transition to the younger Yeo’s leadership – Roger&Sons now has about 20 employees, including five millennial carpenters. Yeo’s mother, Maisy, and brothers, Lincoln, 27, and Ryan, 23, are all involved in the business.

While he is encouraged by the company’s growth, sustaining the pace has not been easy. Over the past few months, he has lost over 5kg from the stress of setting up a new showroom and event space at King George’s Avenue. To reach out to the younger generation, the Yeo brothers intend to hold craft workshop collaborations with other Singapore-based makers in the event space.

Growing the business based on the tenet of sustainability is also important to Yeo. “Carpenters are the biggest killers of trees. Look at the amount of waste we produce,” he says. To that end, Roger&Sons is increasingly incorporating the use of leftover wood from local trees cut down to make furniture instead of discarding it.

Although the cost of treating and storing these materials is higher compared to imported wood, the perception of carpentry as a cut-price industry has been changing, thanks in part to Yeo’s efforts.

“When we started a while back, it was very hard to find customers who were willing to pay a little more. But now that everyone wants something bespoke or tailored to their needs, it is a lot better not just for myself, but makers in general.”

I enjoy drinking with my brothers, and like The Balvenie’s Caribbean Cask, 14 Years, Four Pillars Rare Dry Gin, and Crossroads Brewing Company beers.

My favourite football team is Liverpool F.C. because it is a family club. For fitness, I play football with old friends.