3 Curators that are Shaping The Landscape Of Art In Singapore

Key decision-makers with an eye for beauty and a head for business. We speak to a trio of curators on how they do it. 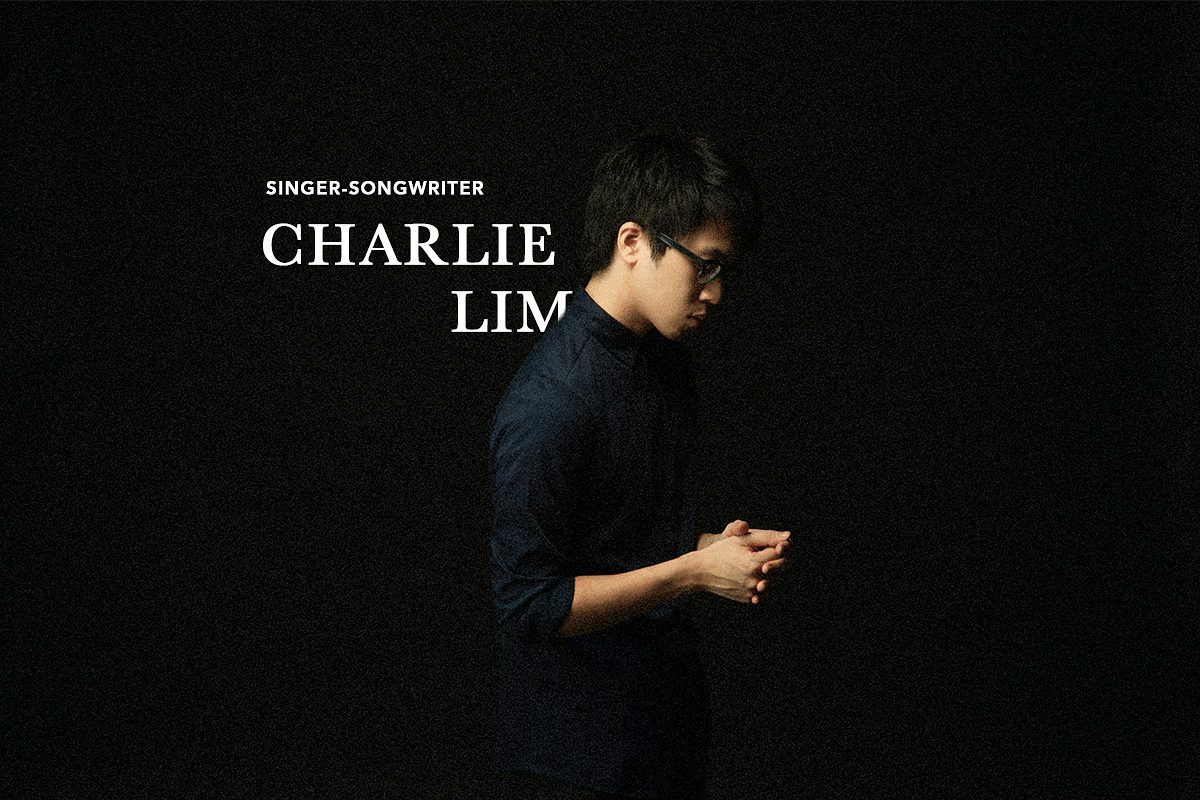 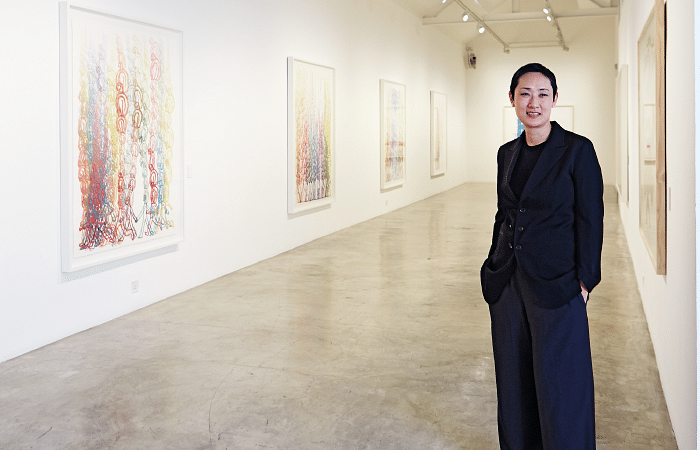 Emi Eu’s talent lies in spotting the right established artists and inviting them to the Singapore Tyler Print Institute (STPI) to collaborate under its residency programme. The programme has been known to push artists to surpass themselves and create works that they are not usually known for, which in turn has attracted the attention of international institutions like Museum of Modern Art (Moma) in New York.

One such example is South Korean artist Haegue Young, who was in residence in 2012. During her stay, the artist, who drew inspiration from her time spent exploring Tekka Market, produced a sizeable eight-panel piece that showcased different local herbs and spices, such as ginger and garam masala, printed on sandpaper. The work was acquired by Moma for US$160,000 (S$227,000) in 2014. Such recognition has led the gallery to be the first in Singapore that has been asked to participate in prestigious art fair Art Basel.

“When we invite an artist, our collaboration doesn’t get viewed by the public until 18 months later. And a lot can happen in the contemporary art world in that time,” says the 46-year-old. “That’s why we usually work with more established and senior artists who have been practising their craft for a very long time and know how to navigate minefields thrown their way.”

(RELATED: Is Singapore an Arts Hub Yet?)

Most recently, Eu brought in South Korean-born sculptor and installation artist Do Ho Suh, best known for his 3-D works. The artist ended up producing thread drawings that alluded to his typical fabric sculptures, where thread is the main component holding everything together. “It’s almost impossible to find artworks by Do Ho that are two-dimensional,” says Eu. “These artists are practically creating new works each time they work with us, which makes them very current.”

In two months, Eu will be shining the spotlight on Persian-born, London-based sculptor and painter Shirazeh Houshiary, who was nominated for the Turner Prize in 1994. She was in residence three months ago and the fruits of that collaboration will be exhibited in March. “Shirazeh is a very mature artist, and coming from the Middle East, her sensibilities are very subtle,” shares Eu. “The work she usually does is really labour-intensive and she does it all by herself.

“For someone used to producing her own work, to come here and work with a team of 12 people was a big change. But she took that in stride and we are making structural works with her that employ paper works as well.” 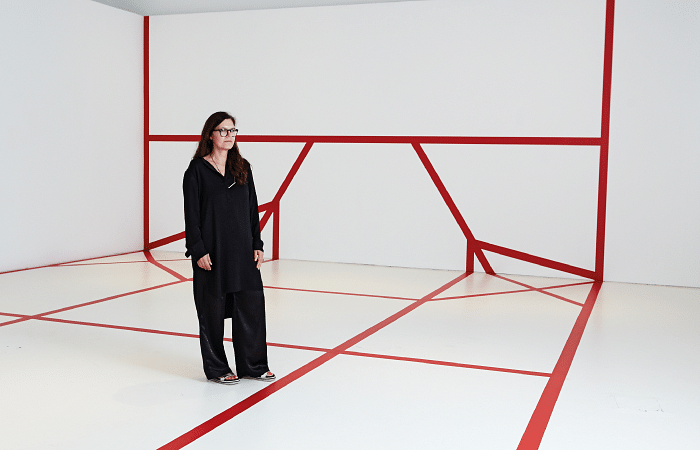 As the public’s appreciation of home-grown artists mature, Professor Ute Meta Bauer believes it is time to introduce art from less accessible regions like Romania and Pakistan to Singapore, through exhibitions and programmes that engage the public in discussions. This, she believes, is key to a holistic art education.

“Singapore is a global hub. But when it comes to art, the country is very focused on its own artists or those from around the region,” says the German-born curator, who was formerly dean of the School of Fine Arts at the Royal College of Art in London, and who has curated global exhibitions for prestigious art organisations like the Venice Biennale. “I think with the opening of National Gallery Singapore and greater attention paid to the arts here, it is timely to also show artistic production that is lesser known, from elsewhere.”

This year, she is banking on the centre’s residency programme “to discover more ambitious and exciting artists”. Not only will this increase the public’s general knowledge of the international arts scene, young local artists stand to benefit from such interaction – especially since the NTU Centre for Contemporary Art (CCA) works closely with Nanyang Technological University’s School of Art, Design and Media and its students.

Hamra Abbas, a Pakistan-born, US-based artist who was in residence last year, is an example. “Her multidisciplinary practice often re-contextualises cultural references and she appropriates them through new artistic techniques. During her residency, she learnt the courtly Chinese painting style of Gongbi and is working on portraits of people living in Little India,” says Prof Bauer.

Romanian artist collective Mona Vatamanu and Florin Tudor, who were in residence in 2014, are another pair that Prof Bauer discovered. The two address the contemporary post-communist condition in their work and, during their residency here, made a film-documentary of foreign migrant workers living away from their families, in a bid to improve their livelihood. Prof Bauer says: “The programme allows for a diverse network of artists, curators and researchers from Singapore and beyond to meet and exchange ideas, as well as engage with one another’s practices. 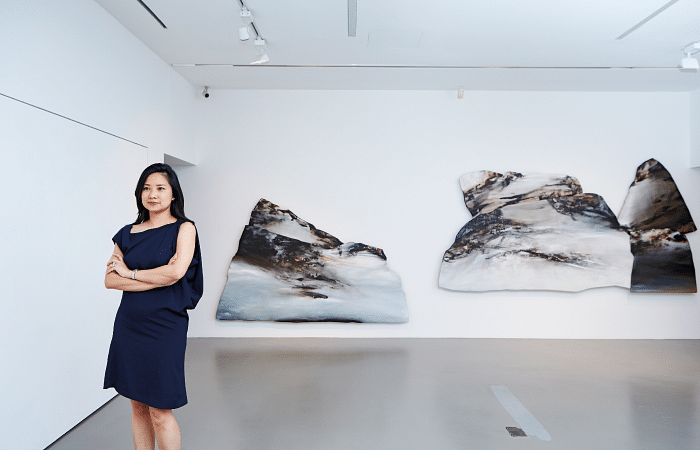 When Stephanie Fong started Fost Gallery in 2006, few artists would work with her as she was a young gallery owner then. But her consistent exhibition programme – Fong used to do 12 exhibitions a year – and tenacity to stick to her cause of championing local artists have paid off. In 2013, the gallery was named as one of Asia’s top galleries by global art news website Blouin Artinfo.

“The cover was called The Forer Effect. When that issue was launched at the art fair in Paris, it was on everybody’s booth table and, I thought, what a cool achievement for a Singaporean artist. But the only thing people picked up on was Eugene (Tan) from National Gallery making the Power 100 list,” says Fong.

“As a Singaporean, I kept hearing people complain that our artists were not well-represented at shows,” adds Fong, who admires local galleries like Utterly Art and Art Forum for supporting home-grown artists even before Singapore’s recent art boom. Inspired by these spaces, and seeing a niche in the market for a gallery that organised proper exhibition programmes, led to her opening Fost. Other local artists in her stable include Jimmy Ong, Grace Tan, Tan Wyn-Lyn and Ashley Yeo.

This year, the 39-year-old, who is usually drawn to works that explore the artistic journey of its creator, will be adding works by installation artist Donna Ong and photographer John Clang to her gallery. She says: “Donna’s works, while contemporary, have an old-world quality to them. You cannot quite place them and there is something timeless and otherworldly.”

Fong also thinks that Tan Wyn-Lyn, who has displayed good growth in her body of work, is one to watch out for. “That Arctic Circle residency she went for really changed her painting composition,” shares Fong. “From doing Chinese paintings where there’s no horizon or foreground, she came back (in 2013) with a very clear and prominent line in her work where you immediately recognise Western landscape vocabulary.”

Last year, the gallery put up 16 individual wood panel paintings Tan did, which spanned the entire gallery length and took her horizon series to a new level. Singapore Art Museum has since purchased that series. “I feel Wyn-Lyn has pushed her practice to another level, and everyone following her notices how interesting it is.”

On the purchasing end of the spectrum, private collections offer insight to what’s in vogue in the art scene. These art collectors shows us their pieces and share which artists they have their eye on next.

Among some of the key works that belong to Dr John Chia and his wife, Dr Cheryl Loh, is local photographer John Clang’s 3ft Deep, which Dr Chia describes as “Albert Camus, Jean-Paul Sartre and Samuel Beckett all rolled into one”.

“If we ever publish a collector’s book, this image would be on its cover,” shares Dr Chia, a well-known figure in the arts scene. The senior consultant medical oncologist at the National Cancer Centre Singapore is a regular speaker at art forums, including Singapore Art Museum’s (SAM) Perspectives series. The couple enjoy being challenged by the aesthetics of contemporary art. “It’s like navigating a different terrain and requires an open mind.”

One piece that has piqued the couple’s interest is Singapore native Chun Kai Qun’s The Paper, Some Paper, which they first saw last year. The installation is formed by suspended sheets of classified ads from local newspapers, which Dr Chia interprets as a depiction of the detritus of modern Singapore living, much like that in Irish author James Joyce’s Dubliners. “I would really like to own that, or perhaps donate it to a museum, since it is almost impossible to display at home.”

One could say that Lourdes and Michelangelo Samson “matchmake” new pieces to existing ones in their collection, which includes pieces by their native Filipino artists, South-east Asian works and Japanese contemporary art. “Sometimes, we buy a work because we think it will complement another piece in our collection, either in terms of concept or materials used,” says Lourdes. Their art collection formed part of SAM’s 2013 exhibition called The Collectors Show, which showcased contemporary art from private collections in Asia.

For instance, they purchased a set of light boxes by Indonesian artist Angki Purbandono, which has slippers of inmates from an Indonesian facility, because they felt it worked well with Last Flight by Alfredo and Isabelle Aquilizan, which features a pair of 3m-tall colourful wings made from discarded rubber slippers. Next up, the Samsons would like to include works by Cambodian sculptor Sopheap Pich. 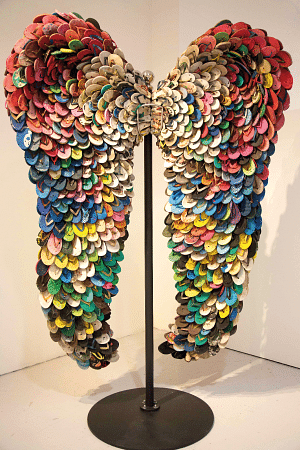 Lourdes says: “Pich makes use of rattan, which is widely used as material for furniture, to create fluid sculptures and installations that are rooted in Cambodia’s turbulent past and unfolding present.”

Media veteran Woon Tai Ho can’t get enough of celebrated artist Tan Swie Hian. The CEO of media consultancy RHT Digital & Media first met Tan in 2008 when he spent a year interviewing the artist for his first non-fiction book To Paint a Smile, an account of Tan’s life and work.

To Paint A Smile is also the title of Tan’s painting which graces the cover of that book. Woon, who has seven of Tan’s works, says it is the most important piece in his collection. “Tan applied oil paints directly from tubes and dotted the canvas in a style that was not unlike Monet or Renoir. The result is a sea of oil dots depicting birth and death, happiness and sadness, beginnings and ends – an entire circle of life in a celebration of colour. I drew inspiration for the book from this single painting.”

He is also intrigued by Indonesian artists Rudi Mantofani and Agus Suwage. “Although Rudi is relatively young, he has infused contemporary issues of Indonesia into his art, like urbanisation and overpopulation. For Agus, I am particularly interested in his smoking series. He painted famous people smoking and in the same posture – from Andy Warhol to Mother Teresa. Fascinating.” 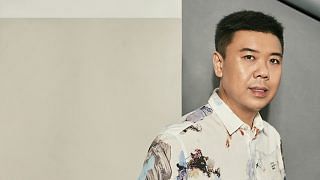