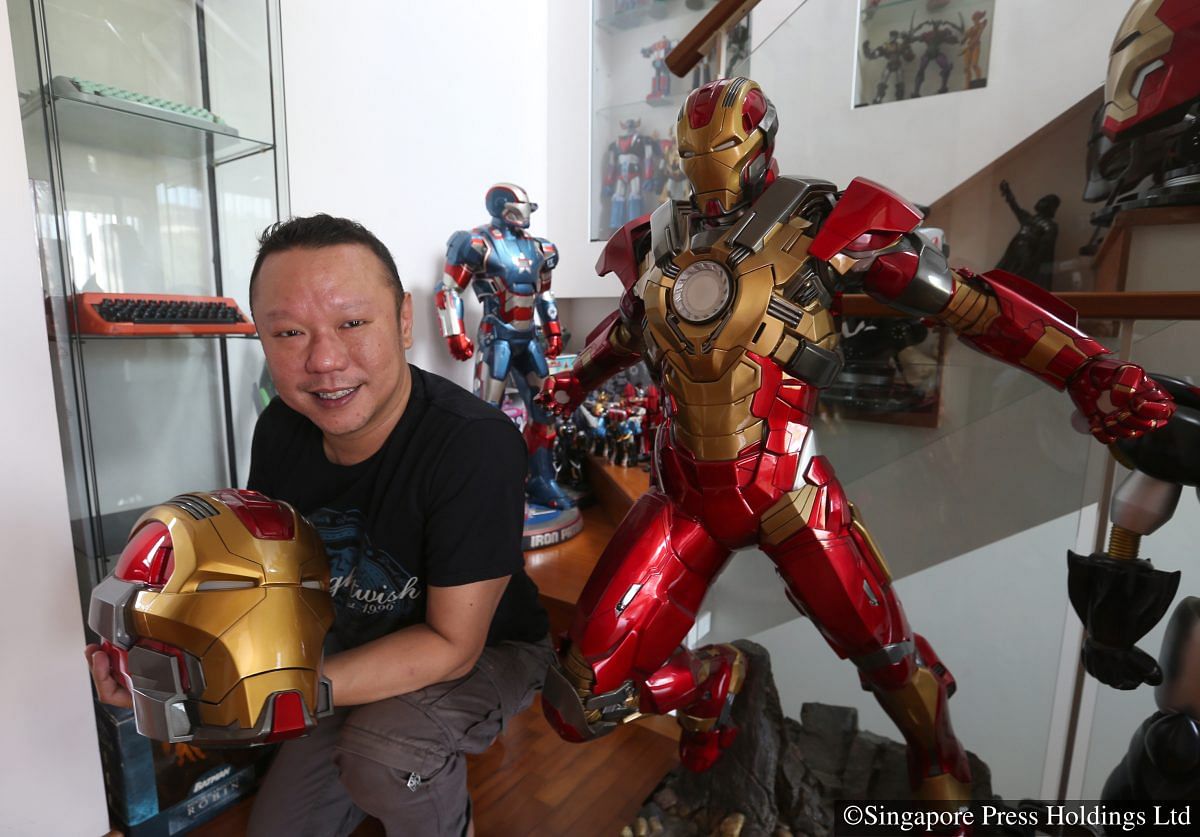 The guitarist in death metal band Silent Sorrow was annoyed by anyone who could not see past his hair and clothes. “People judge a book by its cover. Girlfriend’s parents will say, ‘Wah, your hair so long eh. Girl, better don’t mix with him.’ The police harass us. They say, ‘Why you dress so black? Wah, schoolboy long hair some more’ and spot-check us.”

That teen is now 41. The grown-up Danny Lim is much less angsty.

These days, the cops leave him in peace and his figure probably will not let him fit into the black leather jacket he wore when he headbanged.

He has a lot of reasons to smile.

Since 2013, Lim’s company Imaginarium Art has built a business in collectible statues, winning licences from American firms such as Hasbro and Disney to produce highly detailed and expensive models of characters from the Iron Man and Transformers franchises.

The father of one will not say how much his companies are worth, but he has come quite far for a lad who grew up in a three-room flat in Bukit Merah and sought escape in heavy metal.

We chat in his home in a townhouse development off Upper Thomson Road. Much of the time, he is overseeing employees in Dongguan, in the south of China. Over lunch prepared by his domestic helper, he tells me why fans are willing to spend $1,500 on a scale model of a character from a movie or comic book.

His company is reproducing a treasured memory from someone’s childhood, he explains, and fans take inaccuracy as disrespect. Recently, he made a figure of Ultra Magnus, a character from the 1980s version of the Transformers film and television show. A prototype was shown on social media and fan forums were abuzz – with annoyance.

“They told us that our colours were entirely wrong. So we asked them what they wanted and they all came back, showing us the same colour. It means they were right and we were wrong,” he says. “We built it together with the fans. We don’t make a product for us, we make it for them. If they want us to do something, we listen,” he says.

Lim’s firm makes a limited run of each piece and once they sell out, no more are made. He just announced the launch of the Rescue Armour version of an Iron Man suit, which sells at $850. Only 500 units will go on sale. Pre-orders are taken on its website and once every unit is sold, the order books are closed.

Imaginarium releases about a dozen products a year. There are two or three of them available to order at a given moment. The company used to have its own factory in Dongguan, but a year ago, he outsourced production to other companies, preferring to stick to sales, distribution and warranty support.

So from about 70 workers at its height, he is down to about 20 now – a fact that makes him a lot happier. “I used to have to oversee everything myself – it’s ‘laoban’ this and ‘laoban’ that for every little thing. I had no time to do anything else,” he says, using the Mandarin word for boss.

He now trains contractors to meet the quality standards he set for his own factory, standards that helped him win the licences from Disney, for the Iron Man statues; and Hasbro, for Transformers characters.

“I send my people out to the contractors for six months at a time, teaching them how to make the statues,” he says. Anyone in China can make a “good enough” statue, he argues, but his company became known for its ability to capture details, especially in its Iron Man statues, which feature glossy metallic surfaces that must be painted with precision. Mass-produced toys are made from injection-moulded plastic, cranked out by machines. Lim’s statues are made of resin and created by hand, one at a time.

An artist first crafts the figure. A silicone mould is made from it. Resin is poured into the mould. Each mould can be used a few dozen times before it loses its shape and is discarded.

The resin figure is taken from the mould and spray-painted by hand. “I don’t know how to do it myself, but I have to understand the concepts behind production. Different parts of China have different climates, so you have to know when to spray or the humidity will ruin the figure and it has to be thrown away,” he says.

Because he spends so much time in China, he has become close with his neighbours in his apartment complex in Dongguan and with his colleagues in the industry. They provide the emotional support that has made everything possible, he says.

Right now, he is in talks with another company to help run Imaginarium, so he can focus on his original, and larger company, Toyntoys.com, which distributes collectibles based on American comics and movies in China and South-east Asia.

He founded Toyntoys.com in 2003, a year after he made the eBay trade that started his journey into the toy world. His then-girlfriend and now wife, Lorelie Lim, had grown up with the Japanese cartoon Voltes V, so as a gift, be bought her a figure from the series. It turned out to be a character she did not care much for, so he put it on the auction site eBay.

To his delight, a buyer in Italy paid nearly double its $200 original price. In Europe, licensed toys cost more, he realised. Buying from wholesalers here and selling them online seemed like the logical next move. Meanwhile, he kept his job as a network administrator in a bank.

He also noticed that in the IT malls of Sim Lim Square and Funan Centre, shops sold everything related to popular games such as StarCraft and WarCraft, except toys. He decided to do something about it. “During lunch, I’d get two cartons of figures from distributors and take them on my motorbike to the games shops,” he says. He was now a toy distributor in his own right.

Soon, the side business grew so lucrative, he quit the IT job and founded Toyntoys.com. That grew, but he was distributing other people’s toys. In 2013, he launched Imaginarium so he could have products of his own.

He is the son of an instructor in the Chinese martial art of wushu and a housewife. He grew up in the Bukit Merah housing estate, with two older sisters, 50 and 53, now a housewife and administrative manager respectively.

At Delta Primary School and later at Commonwealth Secondary School, he was not a good student. “I was a rebel,” he says. He hung out with friends who liked metal music and discovered the heavy rock of Sepultura and the black metal of Cradle Of Filth.

Other than a fascination with the dark side of life, he reckons he was well-adjusted and did not feel like an outcast, he says. With friends, he formed the death metal band Silent Sorrow, which, along with other groups such as Opposition Party, formed the hardcore scene of the 1990s. He would join that latter band in 1993, after Silent Sorrow’s break-up.

His father Lim Chin Geok, who died in 2013, and mother Lum Sam Mui, 69, were baffled by their son’s behaviour. “They thought I was hopeless. They could not understand me or my music,” he says.

A year after his interview with The Straits Times, national service would take him out of the music scene, as it has many other teen musicians. In the barracks, his angst fell away, he says.

Because he failed the O-level examinations, options were limited after national service. What he calls an “inner voice” guided him to an IT course. His father, relieved that his son was getting serious about life, paid for the course out of his life savings.

That would lead to a career in computers, up to the time he quit to form Toyntoys.com. His friend Kyler Teo, 42, a logistics executive, has known Lim since secondary school. They bonded over their fondness for death metal.

“He didn’t study much – he was jamming with the band all the time,” he says, laughing. Otherwise, the teenage Lim was a social kid and popular with girls, says Teo.

Although Lim showed no sign of entrepreneurial talent – he was a musician and not a band manager – Teo says he is not surprised by his later success as a businessman.
“He is a careful person. He tried it on eBay first and when it worked, he moved on from there,” says Teo.

Lim and his wife Lorelie, 43, a senior physiotherapist at a private hospital, have a son, Yong Jun, 11. They like to play card games such as Uno in their spare time. On weekends, they go on foodie trips to Malaysia, where Lim digs into the nasi lemak and other Malay dishes he misses when he is in China.

These days, he is looking to diversify and has gone back to his IT roots by creating TNTech, a company that makes its own brand of ERP (enterprise resource planning) software, which is used by corporations to automate processes such as sales, human resources and shipping. ERP software is a field dominated by giants from Europe and the United States, but Lim thinks he has a fighting chance.

“There are certain goals I want to achieve. I’m the kind of person who’s always on the move. I want to try things I haven’t tried before.”

This story first appeared in The Straits Times.