What drives Mike Horn to embark on these harrowing and near-impossible journeys? 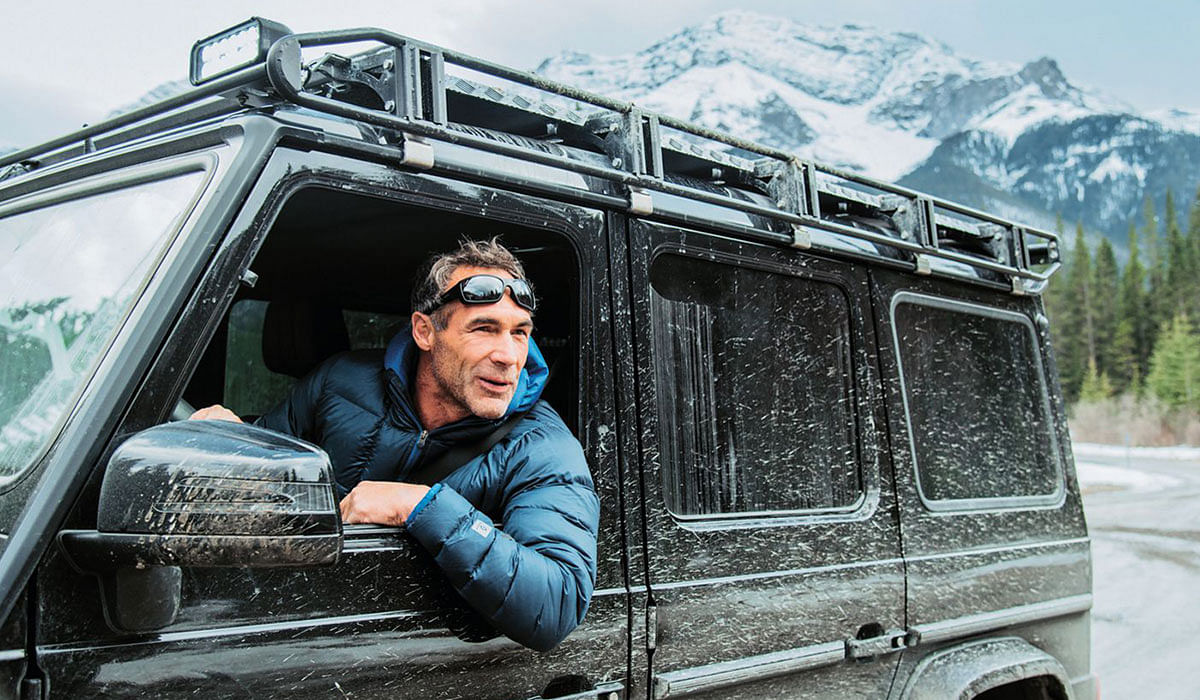 [dropcap size=small]W[/dropcap]ho the hell is Mike Horn? – that would probably be the same question you would be asking, if you got an invitation to spend a couple of hours on a yacht with this intrepid explorer. Yet, as I stand aboard the Pangaea off the coast of Port Dickson, with the wind whipping saltwater into my face, listening to him speak about his adventures, another question replaces the former – how the hell could anyone not know Mike Horn?

If you do a quick Google search on the man, you’ll see why some have pegged him as the world’s greatest modern-day explorer. His list of accomplishments looks similar to that of Marco Polo, Captain James Cook and Sir Edmund Hillary, combined!

He has swum the entire length of the Amazon (using a hydrospeed), hunting for food to survive and resting along dangerous riverbanks at night. He was the first man to circumnavigate the globe around the equator, alone and without motorised transport. He was the first human being to complete a 20,000km journey circumnavigating the Arctic Circle using only a boat (also unmotorised), kayak, ski kite and on foot, which lasted two years; and he reached two peaks higher than 8,000m in the Himalayan mountains without the use of any oxygen.

The real reason, however, that I am so enamoured of his gusto for the next big adventure and his passion for pushing the limits, is the fact that, before all this, he was already a self-made millionaire. As the story goes, Horn got rich selling cabbages in South Africa in his early 20s. “I thought I would have more freedom with money, but I really had less,” he says. So, he made the decision to give away everything he owned to family and friends – except a plane ticket to Zurich and US$50 in his pocket. He says: “It was only after giving everything away that I felt truly free.”

(RELATED: How Anthony Teen defied death during a cliff climb to build a business that takes on near impossible projects)

In some ways, Horn says he didn’t become an explorer; he was born one. In an anecdote he shares with The Business Times, he says that, when he was younger, he and his two sisters were all given bicycles. “I wanted to ride it 300km to see my cousins but my sister, who was given the same bike, rode it around the house and never left home with it, and she became a well-known judge in South Africa. My other sister did not even get on the bike because she was always drawing and she’s now a fine artist restoring paintings in London.”

Horn, arguably, has seen more of our planet than any other human being. And, if through his travels, he has developed an urgent need to preserve it, it’s hard to think that the rest of us need to be doing anything else but. “Explore, Learn, Act” is a guiding principle for Horn, one that sees him imparting the lessons of his experiences to anyone who would listen. More specifically, he is passionate about sharing his knowledge with the younger generation, “helping to educate and inform them about the beauty and significance of what is now ‘their’ planet and to help preserve its magnificence for generations to come”.

01 THE CALM BEFORE THE CLIMB
Horn on the road to K2.

02 ICE TRAINING
Horn in Canada, preparing for the Pole2Pole expedition.

His latest project is the Pole2Pole expedition, which sees him circumnavigating the globe once again, this time via the North and South Poles, to gain an insight into culture and nature in rarely explored regions. The expedition will take him from Europe to Africa and then on to the Antarctic, Oceania, Asia, the Arctic, North America and finally back to Europe. The distance he has to travel is close to 40,000km and will take him two years. This time, though, he is getting some help from motorised vehicles, namely the Mercedes-Benz G-Class. And as the German marque is also a sponsor of the Pangaea, it gets two purpose-built engines to help with the tricky parts of the journey.

Although an explorer’s life is one of solitude, it’s surprising and incredibly heart-warming to learn that Horn is also a family man. This Pole2Pole expedition almost didn’t happen because, in 2015, he lost his wife, Cathy, to cancer. He says: “Before my wife passed away, I told her, ‘If I could die for you, I would’, and her response was, ‘Of all the people I have known, you are someone that really knows how to live. So, I don’t want you to die for me; I want you to live for me’.” After she passed, he decided that his place was in Switzerland, at home with his daughters, Jessica and Annika. However, it was they who told him to continue. Cathy was the one that handled all the planning for logistics, support and promotion, tasks that have been taken on by Horn’s daughters.

“‘OF ALL THE PEOPLE I HAVE KNOWN, YOU ARE SOMEONE THAT REALLY KNOWS HOW TO LIVE. SO, I DON’T WANT YOU TO DIE FOR ME; I WANT YOU TO LIVE FOR ME’.”

WHAT HORN’S WIFE, CATHY, SAID TO HIM BEFORE SHE DIED OF CANCER

The Pangaea’s stop off the coast of Port Dickson in the Straits of Malacca is part of a detour, while on the way to Hong Kong for a replacement to a damaged part of the yacht. After spending about two hours with a man I now think represents the pinnacle of the human spirit and one who has an extraordinary commitment to living life to the fullest, I leave the Pangaea the same way I arrived – on a rubber dinghy through choppy waters. Now that I’ve personally answered the question, ‘Who the hell is Mike Horn?’, the more appropriate question for me to be asking would be, ‘Where in the world is Mike Horn?’ 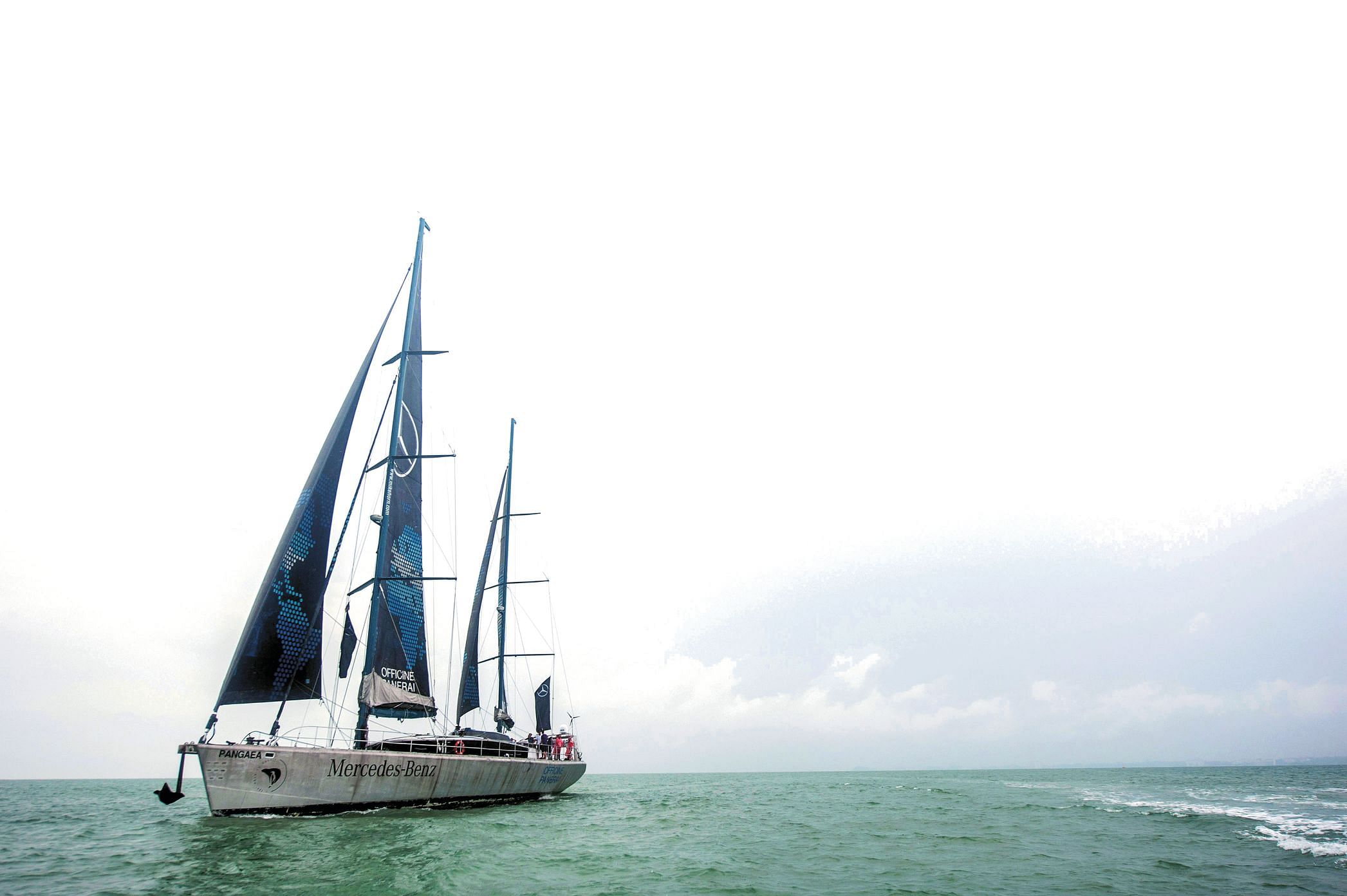 This ship can navigate through the tropics and small rivers as easily as it can the polar regions. It was designed to leave minimal carbon footprint, so its two engines were made to be used only as a necessary alternative to the 35m mast with 600 sq m of sailcloth. In addition, the vessel is equipped with large nets to collect bottles and plastic bags from the waters. The hull is left deliberately unpainted, so that when the ship has to break through ice, no paint flecks would break off and be toxic to the environment.