Meet the inspiring women who are making the world a better place, one social enterprise at a time. 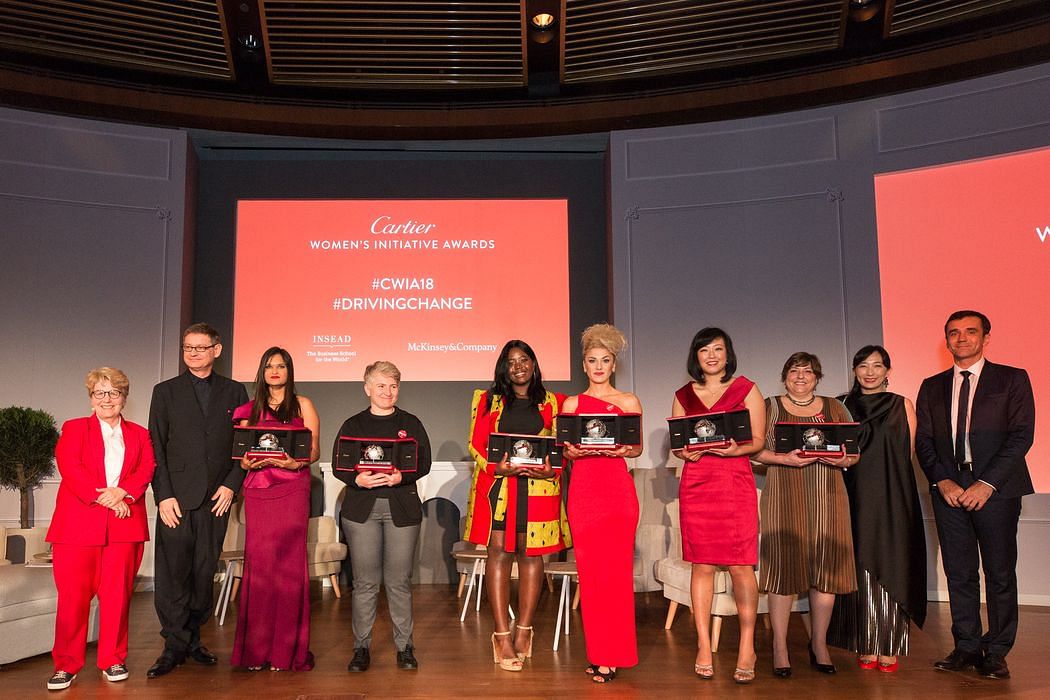 The room is a glowing red and the evening is warm – not only because of the perpetually sunny state of Singapore, but also because of the smiles beaming across the ballroom at the Capella Singapore. The source of all this warmth and camaraderie is Cartier and its empowering Women’s Initiative Awards. In its 13th year of joining forces with McKinsey & Company and INSEAD Business School, it is as powerful an event as ever, one where hopeful finalists from all over the globe vie to be conferred as laureates for the event recognising the feasibility and social impact of their altruistic start-ups.

In this scarlet tinted ballroom, female entrepreneurs brimming with the brightest world-changing ideas have gathered to share and present their experiences as strong leaders of their start-ups. One entrepreneur has created tactile tablets for the blind and visually impaired, another has engineered a device that can detect oncoming epileptic fits 25 minutes in advance, while another driven businesswoman has set up an online blood bank that collects and dispatches blood donations to hospitals. These are all laudable socially driven enterprises that will, and already have, made significant improvements to human lives, but with one great vantage that sets them apart from other philanthropic endeavours; they’re all for-profit.

With this many magnanimous individuals in one place, the aura of goodwill in the room is palpable.

“Wow,” exclaims Cyrille Vigneron, CEO of Cartier. Looking out to at the smiling faces from the stage, he shares, “People often ask me, ‘why did Cartier start the Women’s Initiative Awards?’ and feeling the energy in this room, it’s not ‘why’ but ‘wow’.” A sigh of admiration escapes his lips, “This is probably the most powerful community I’ve ever seen.” The sea of faces below beam as many turned to each other exchanging knowing looks, for among them sit laureates of the the past awards as well as the 18 finalists of the current year who journeyed together in the Awards Week program. Through business workshops, coaching sessions and jury evaluations, they’ve since formed a bond of sisterhood.

“Even though we’re from different parts of the world and in various industries, we all have so much in common,” Kristina Tsvetanova, one of the winning laureates from this year’s Awards, confides in me after I congratulate her. “It was a real learning opportunity for me and so inspiring to hear how these phenomenal ladies have overcome so much to get here.”

The “here” that Tsvetanova speaks of  is this night in May at the Capella Singapore where Cartier has chosen to mark the remarkable milestones these women have chalked with a profound event, partnering with TED, the non-profit organisation dedicated to ideas worth spreading. Tonight, the room laughs, sheds a tear and is inspired by the empowering words of some truly exceptional ladies including the likes of past Icelandic presidential candidate Halla Tomasdottir, Emirati politician HE Sheikha Lubna Khalid Al Qasimi  and Gingger Shankar,the multi-talented musician and daughter of iconic sitarist Ravi Shankar.

Then, the moment of truth as the six laureates for the 2018 edition of the Cartier Women’s Initiative Awards are announced. Representing leadership, resourcefulness and creativity, the female entrepreneurs from Europe, Asia Pacific, North America, Latin America, Sub-Saharan Africa and Middle East & North Africa stand side by side on the stage as the room erupts in thunderous applause. Emotions run high as the winners embrace each other and tears stream down their faces. It is the perfect end to an event where every moment is of sharing and support.

“I wasn’t crying because I won,” Tsvetanova  tells me, “I cried because I wanted these ladies to win.”  It is that depth of emotional connection is what makes the Cartier Women’s Initiative Awards a truly powerful movement. www.cartierwomensinitiative.com

WINNER SPOTLIGHT: THE LIFE SAVER
The finalists of the 2018 Cartier Women’s Initiative Awards are doing some seriously impressive work with their young companies, not least of whom is YiDing Yu of the United States (US) who was named this year’s laureate for North America, thanks to her revolutionary work at Twiage.

What inspired you to apply for Cartier Women’s Initiative Awards?
For the longest time, I knew I wasn’t ready because this is a business model competition. You want to make sure that you’ve hit the right milestones where your model is proven effective, and it’s hard because Cartier only accepts companies that are three years old or less for this completion. Every entrepreneur has to think to herself, ™Am I at the right stage to win the competition?∫ For the first two years, Twiage certainly wasn’t there; we were still experimenting and trying out new things. But we fine-tuned our business model and soon our technology was utilised in sixteen hospitals in the US which showed positive outcomes. Mind you, there are about 5,000 hospitals in the US, so we’re a tiny drop in the ocean. But looking at the data and the results, I thought that Twiage has a real opportunity to achieve something really big.

Tell us a bit more about Twiage and its life saving solutions…
In a nutshell, Twiage is a digital platform that enables the transmission of real-time data from the ambulance to the hospital. Patients’ vitals and location are relayed in real time to the hospitals from the ambulance via a free mobile application. Hospitals can then direct the right resources and emergency medical teams are better prepared to tend to the patient as soon as they arrive, increasing efficiency and the patients’ survival. Currently, hospitals that use Twiage save an average of 14 minutes per patient upon arrival. If you’re struggling to breathe, if your heart has stopped–that 14 minutes is the difference between life and death.

Despite the upswing of technology adoption across various industries, communications between ambulances and hospitals are largely done via radio. Why do you think it’s taken this long for technology to break into healthcare?
Yes, the healthcare industry is definitely not moving quickly enough in the adoption of new technology unless we are talking about a new drug or procedure, because the truth is dollars drive the decision. Having an efficient communication method and bridging the gap between the ambulance and the hospital is viewed as a separate industry and no one ± up until now–has thought, ™How do you make that into a business?∫  What we’ve discovered at Twiage is that using technology not only saves lives, but also better business for hospitals as it increases operational efficiency of emergency departments. With Twiage, door to room time has been reduced by 30% while the turnaround time for ambulances is increased by 65%, thus allowing them to tend to more emergencies at a quicker rate. Meaning, hospitals get to improve their bottom line!

How receptive are hospitals in adopting your business?
In the beginning it was definitely very hard because change is difficult. No one says radios are the best technology available and every doctor agrees that they don’t get all the information they need. But for the most part, people don’t see it as a major problem. However, we have had early adopters from the beginning, people who immediately saw the opportunity and took a bet on a young company and believed we could change the game. Now, we have the data and proof of return of investments, so hospitals have all the information they need to make a sound business decision with the best patient care. As doctor, I want to see these two aligned and I’m overjoyed that it’s the case here.

As a young female entrepreneur, what have you learned from your journey at the Cartier Women’s Initiative Awards?
One of the first things I learned was how wonderful the community of female entrepreneurs are. Being an entrepreneur is awfully lonely. You’re dealing with incredible decisions and on the outside you must provide a polished exterior to your investors and customers. But every entrepreneur has definitely had their share of struggles and you can’t show any cracks because investors are looking to you for assurance and employees are looking to you to lead them. How do you do that? Through this week at the 2018 Cartier Women’s Initiative Awards in Singapore, my co-finalists have been so authentic and forthcoming about the challenges they face and we’re all genuinely excited to help each other. This support and mutual understanding is probably the most important thing I’ve learned here.