And the plans he has for the Internet of Things. 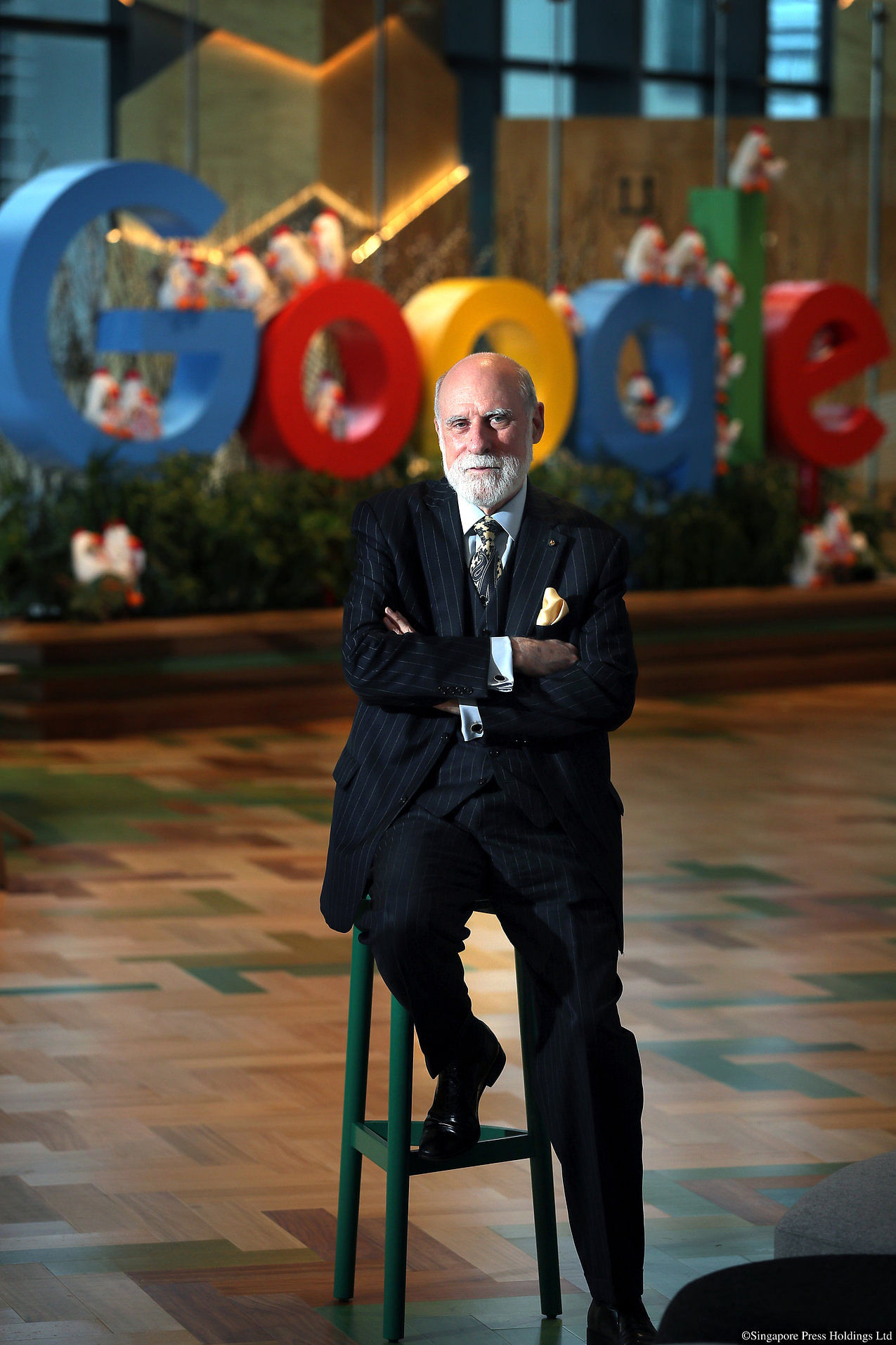 [dropcap size=small]V[/dropcap]inton “Vint” Cerf likes to solve tomorrow’s big problems. The man known as one of the fathers of the Internet has made a career out of looking for the core problems of nascent but potentially break-out technologies, and then figuring out fundamental and elegant ways to solve them.

“Let me give you a little parable,” the 73-year-old says one morning at the Singapore headquarters of Google, which since 2005 has hired Cerf as ‘Chief Internet Evangelist’.

“This is the boulder and the pebble parable. So, let’s imagine that you live in a little town and there’s a big boulder up on top of the hill. And one day the boulder comes loose, and it’s rolling down the hill, and it’s going to destroy the town. And you’re too small to really stop the boulder, right? So the question is, what do you do? Besides maybe run away, but you’re the hero.

The pebble that Cerf and his collaborator, Bob Kahn, found in the 1970s, was very simply a set of rules. But what a set of rules it was, becoming the key piece of architecture that allowed the eventual creation of the Internet.

What was the problem that they solved?

The year was 1973, and the US Defense Department had just started using computer networks to facilitate the sharing of academic research at the various universities that it worked with. Those networks adopted a relatively new technology called packet switching, which used software protocols to break information up into blocks of certain sizes to send over a network.

But Arpanet was confined to computers sitting in rooms and connected by wires. How could those computers also connect with the military’s ground-based radio and wireless satellite networks, not to mention the emerging development of local-area networks?
That problem of inter-network compatibility was what Kahn, who had just joined what is now called the Defense Advanced Research Projects Agency (Darpa) in 1972, wanted to solve. Kahn knew Cerf had worked on the transmission protocol for Arpanet, and sought his help.

“So Bob shows up and he says, we have a problem,” Cerf recalls. “My reaction is, what do you mean, we have a problem? He says, well, I’m trying to figure out how to get all these nets to work together. And he wanted them to be distinct and separate nets so that anybody who wanted to build another one could do so, and then we would use whatever these protocols were to put them together.”

The two men came up with a set of rules called the Transmission Control Programme, which was later modified to be the Transmission Control Protocol and Internet Protocol, or what is commonly known today as TCP/IP. TCP/IP governs how information is sent from one computer to another and how to make sure that the information gets to where it needs to go. It is a design that is so fundamentally sound and flexible that it is still the organising technology underlying the Internet today.’

“This platform, which continues to grow and spread, and get faster, keeps stimulating new ideas for making use of easy connectivity,” Cerf says when asked about the remarkable longevity of his invention. “And when you talk to people who are designing devices that are programable, there’s this casual assumption, OK, well, it’s no big deal to connect them to anything in the world because the Internet’s there.”

“Let’s keep working on finding ways to share the information that we have so we will all be able to see as much as possible and derive benefit from that,” says Cerf, who sits on the board of the US National Science Foundation. “Either substantiate or refute our theoretical models, and maybe discover opportunities that we didn’t know existed, except that you went somewhere in your research that I’ve never been. And if I get to see some of your data, it’s sort of like you being Marco Polo going to China and coming back and saying, look, it’s a noodle.”

That sensibility is seen in Cerf’s current research.

As a researcher and Chief Internet Evangelist at Google, Cerf is currently working on problems related to the Internet of Things, the term coined for the increasingly ubiquitous collection of connected objects like programmable photo frames and intelligent appliances. It is an area that has drawn significant resources at Google, which bought a smart-home company called Nest for US$3.2 billion in 2014 and which has recently introduced an electronic home assistant device called Google Home.

“We are very interested in this new phenomenon called the Internet of Things,” Cerf says. “It’s not really all that new, but it’s new ‘hype-y’, you know? The hype around it is enormous. But for some time people have been installing computers in appliances like picture frames, for example, or coffee makers or microwave ovens. So the idea of moving away from electro-mechanical control to programme control has been very attractive.”

But the growth of the Internet of Things could be hampered by proprietary systems and security concerns. For example, on Oct 21, 2016, in particular, hackers took control of vast numbers of connected devices to attack the servers of Dyn, a company that provides domain name system services, which function like a phonebook for the Internet. That attack brought down many of the world’s most popular websites for most of the day.

“So my job is to keep these desirable properties in mind. That’s one thing.

“And of course we want them to inter-work, because we want people who buy our products to know that the ensemble of devices will function well, and you know, these things need to work with other people’s products too, especially if it’s the Google Home appliance, which becomes the integrating factor for a lot of our appliances, because it’s the thing you interact with to get the lights to turn on and off or the heat to go up and down or the music to play. So some people will have appliances from other suppliers, and my aspiration is that everything will work with everything else. I mean, that’s what the Internet guy tried to do, right? To make everything talk to everything.”

Cerf has also shown a knack, or at least a preference, for reducing a problem to its most fundamental issues.

Take, for example, the problem of a Digital Dark Age, which Cerf has written about.
The phrase refers to the fact that the pace of obsolescence in a digital world is so rapid that the digital content of today may not be accessible in the future because the technology used to interpret that content will no longer be available. As Cerf points out, paper can last thousands of years, but not a DVD and, critically, DVD players.

Cerf’s idea is to develop a standard method or protocol of preservation he calls “digital vellum”. He has raised the possibility of developing ways to describe data structures, coming up with digital object architecture or object identifiers, and ways to reconstruct renderings and interpretations.

Advances in the fields of artificial intelligence, machine learning and quantum computing have also caught Cerf’s attention, partly because they force a rethink of how things can be done.

“Every once in a while some young person at Google will come and say, ‘Why don’t we do X?’ For some value of ‘X’. And I’ll think about that for a minute, and, you know, 25 years ago we tried to do ‘X’ and it didn’t work. Then I have to remind myself that there’s a reason why it didn’t work. So let’s go back and ask, OK, why didn’t ‘X’ work 25 years ago? And the answer might have been, computing was too expensive, we didn’t have enough memory, the processing cost was too slow, whatever it was, it may be that in 2017 doing ‘X’ makes sense.

“And so I have been forced to rethink a number of my intuitions from past experience, because somebody came along who was too young to know you can’t do that. So a lot of my attraction to some of these problems is exactly a consequence of recognising, or having somebody else bang me over the head and force me to recognise, that the conditions have changed and certain kinds of aspirations make sense.”

For a man whose seminal work created a new technological age, it is perhaps fitting that Cerf is a fan of science fiction. At the time of the interview, he was reading The Three-Body Problem trilogy, a series of novels originally written in Chinese and which won a number of awards. “It’s a very dark novel, I mean, it’s really dark”, he says.

“I prefer the kind of nuts and bolts science fiction, that is to say it’s reasonable extensions of what we know. So it’s speculative but you could almost believe that it might actually work. So I enjoy that part. A good science fiction story often takes a concept and says, if this continues, if this goes on, if this becomes the norm, what happens to the society that we live in? And I think that’s actually an important exercise, because as a technologist one of the hardest things you can do is to try and understand, if you introduce this technology, what might be the societal consequences.”