The founders of Mr & Mrs Smith have built a successful business out of bedhopping and now they’re revealing the sexiest hotel rooms around the world. 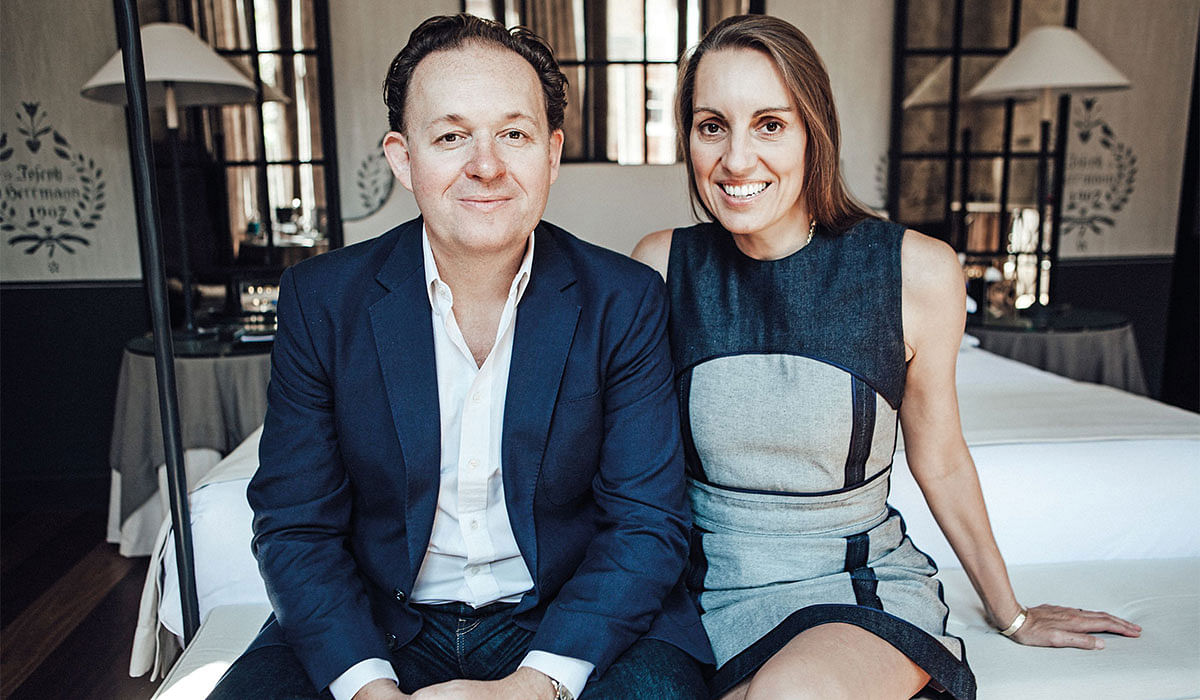 [dropcap size=small]B[/dropcap]efore the film with Angelina and Brad, there was another Mr & Mrs Smith – a go-getting young British couple who, after a bad hotel experience on a weekend away, started the company that curates design-led boutique and luxury hotels best suited for romantic getaways. And 15 years later, founders Tamara and James Lohan’s enthusiasm for a Do Not Disturb sign has yet to wane.

“I look forward to the minute I walk into the room. I always hope I’ll get that ‘I want to jump on the bed’ feeling, that excitement that this bedroom is mine for the night,” says Tamara, an Oxford graduate with long blonde hair and an infectious smile. “What creates that simple human reaction is infinitely more complex; it’s the lighting, the smell in the room, the sheets, the way it’s been set – there’s an art to setting a room – and, of course, the bed.”

(RELATED: How luxury operators are catering to the rising number of solo travellers)

The pair’s new book, The World’s Sexiest Bedrooms – which marks Mr & Mrs Smith’s 15th anniversary – is an homage to the romantic sojourns their company was built on. “I think hotels are sexy, full stop. There’s something charged about them, isn’t there?” says James, a former events and party planner with rosy cheeks and a tousled mop of brown hair. “It’s about checking in and having a wildly hedonistic time together – we did this book to celebrate that.”

Just don’t expect raunchy cliches. “This is not about four-poster beds, mirrored ceilings and crushed velvet,” says James. “It could be a kind of castaway sexy, or an incredibly stylish place like Ett Hem in Stockholm, which feels like your wealthy aunt’s home – someone who has impeccable taste and wonderful staff.” The latter two attributes, arguably, are shared by Mr & Mrs Smith.

The brand that was built on their discerning eye isn’t lying down any time soon. “We have a lovely collection of villas in Mallorca and Ibiza, and we want to curate more villas globally,” says James of their expansion plans. “We’ve also bought a company called Sidestory, which offers cool cultural experiences, little half-day tours of a city by real insiders – like a graffiti artist who takes you around the East End of London.” In other words, laying bare a city’s sexiest side.

Tamara and James list their sexiest hotel bedrooms around the world.

“This one-suite hideaway sits above Coqui Coqui’s Perfumeria, so the scent of orange blossom and tobacco linger in the air,” says Tamara. “I love the idea of a hotel existing only for you and your partner for that night – with twin claw-foot baths and an ornate four-poster bed surrounded by gilded mirrors and marble.”

“After being picked up on the Aman Riva and taken through the world’s most beautiful city, to go to this room is like a fantasy,” says James. “It’s exceptional. You could lie in the big, freestanding bed and just look at the ceiling for an hour; the frescos of cherubs and clouds, and detail in the mouldings, are mesmerising.”

“I’d never been in a room like Soneva Jani’s, where the roof retracts and you can lie in bed and stargaze, which is
pretty special,” says James. “The rooms are sumptuous in an understated way, in keeping with the island location – and have private pools and netting on which you can lie and watch the fish below.”

“At Monteverdi, the simple but beautiful Val D’Orcia suite has one of the most wildly romantic views in the world,” says Tamara. “Sage-coloured shutters open out onto rolling Tuscan hills, and you can sit and gaze at the sprawling countryside from the black oval bathtub in the centre of the room.”