The founder and CEO of Golden Equator on her journey and soft spot for entrepreneurs. 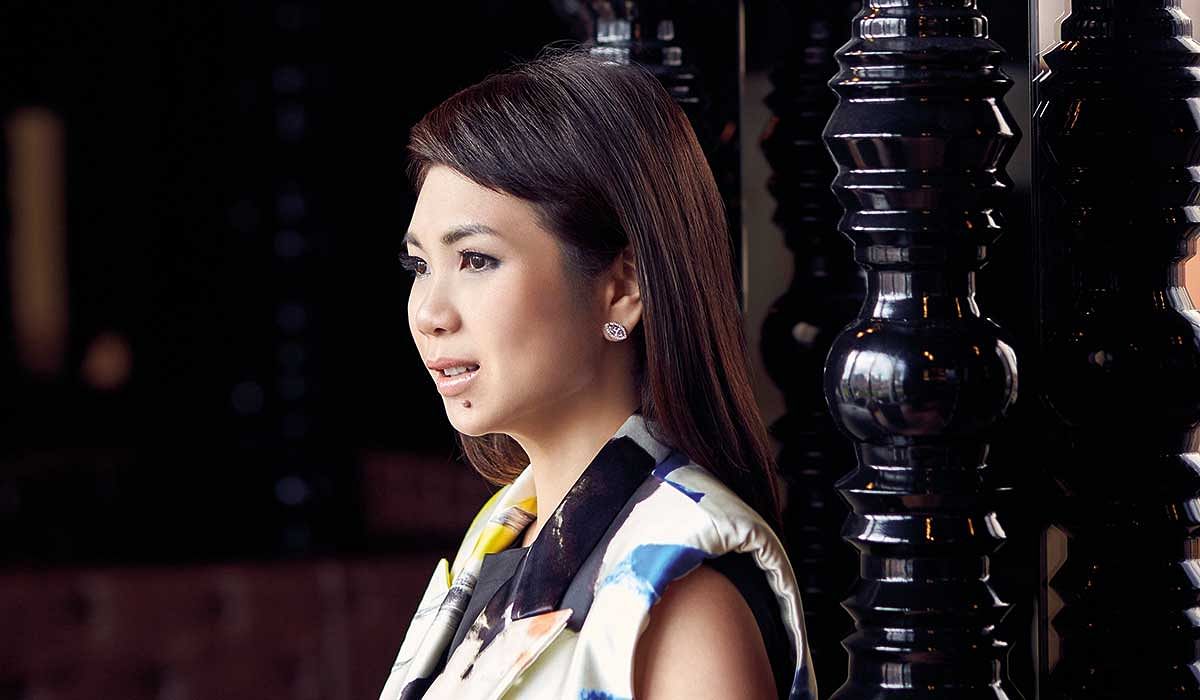 “With people like Taizo, there’s always a long queue of people waiting to meet him,” she says of Son, who famously moved to Singapore a year prior to that, in search of technology companies to invest in.

So, when Chua, the CEO and founder of fintech, business consultancy and fund management company Golden Equator (GE) crossed paths with him at Slush Singapore, a tech start up event, she knew she had to seize the opportunity to tell him about the work she was doing. To her surprise, the very next day, he paid a visit to Spectrum – a sleek technology and innovation business club that she co-founded – located at Duo Tower. Early last year, he not only became the group special adviser to Golden Equator, but he also moved Mistletoe, his early stage venture firm, to be based in Spectrum.

Chua’s takeaway from this experience is this: “Women should ask for things more – I see that more in Western culture but less so in Asia. I always encourage my staff to ask for things – if you want a lunch appointment with your CEO, don’t be afraid to ask for it. I asked Taizo to let me share my story and to visit us and, from that, he has brought a lot of value, from his knowledge to his connections.” Indeed, when asked by reporters at Spectrum’s launch what differentiated it from other such ecosystems, Son quipped: “Me.”

Of course, the 40-year-old Chua also has plenty of substance to back up her moxie. In 2012, after over a decade of working at Citibank and American Express, she started Golden Equator to offer wealth management services to affluent families in the region. Within the next few years, it became apparent to her that there was “a lot of buzz in the market about technology” and began to focus on investing in tech companies. She also launched a consulting arm to help start-ups accelerate their business and to assist traditional family businesses in adopting technology innovations to stay relevant.

In 2017, Chua co-founded Spectrum with another female powerhouse, Cheryl Lee, a former banker and co-founder of 1-Rochester Group. By 2018, GE had 70 staff and was on track to reach $1 billion in assets under management by 2019. To date, some of the companies on Golden Equator’s portfolio include Sorabel, one of Indonesia’s largest e-commerce start-ups, which raised US$27 million (S$36.5 million) in a funding round led by Golden Equator; M17 Entertainment, the biggest live streaming platform in Asia, which it introduced to several investors for its different funding rounds; and Vault Dragon, South-east Asia’s leading electronic medical record provider in health care, to whom it introduced a chief operating officer and collaborated with on its sales and business strategy, leading the company to grow its revenue by over 80 per cent last year.

Last month, the group announced a $24.6 million investment from angel investors based in the Asia-Pacific and the Middle East, led by Son, to continue building the innovation ecosystem in Asia-Pacific.

Finding her own way

Today, comfortably ensconced on a cognac leather banquette at the back of Spectrum’s secret whisky bar where members may host guests and hold events, Chua is more than happy to share insights into being a rare woman in the field of technology investment.

“IF YOU DON’T TICK THE BOXES OR HAVE 10 BADGES ON YOUR SHOULDERS, PEOPLE FIND REASONS WHY THEY CAN’T ACCEPT YOU.” – SHIRLEY CRYSTAL CHUA

“In tech, women are under-represented,” she says simply. “Both in the number of entrepreneurs – because without the pool of entrepreneurs, we won’t be able to invest in enough of them – and in female-backed venture funds.” While she says she has never personally experienced outright gender discrimination, the bias does come through in subtler ways. “If you don’t tick the boxes or have 10 badges on your shoulders, people find reasons why they can’t accept you,” she says. “You never really know why you face resistance but you kind of gather that gender could be an element.”

That said, with the #MeToo and Time’s Up movements gaining global traction in recent years, there has been a significant change in perspective. “The environment is now shifting to focus more on gender equality and this is happening in tech too. More and more people want to back female founders,” says Chua. “Women offer a different perspective, whether it is through the user experience or how a service is being offered.”

(RELATED: New start-up for women helps cushion impact of leap from corporate to tech and startups)

She is putting her money where her mouth is. Last September, Ohmyhome, a property marketplace founded by sisters Rhonda and Race Wong, raised $4 million in Series A funding led by Golden Equator Capital. The business’ unique selling point is that it aims to simplify how properties in Singapore are being transacted, by facilitating do-it-yourself transactions, offering fixed-rate agent services and on-demand mortgage and legal services.

As a rare female founding partner of a venture fund, Chua is not afraid to bring a softer touch to her work. There is a difference when she and her male partners interview entrepreneurs for potential investments, she says. “His considerations are very factual, mine are slightly more intuitive.”

So, what does she look out for? “I listen to the way an entrepreneur speaks. Does he or she have charisma and know how to deal with things? It is not always about being successful but that, even if he fails, he knows how to pick himself up.”

She recalls one occasion when the men simply “could not crack communication” with an external party. She says: “I was called in to listen to the situation, so I came in with a different approach. When I brought in a female element to the negotiations, everyone seemed to soften a bit.”

Says Son of the woman who stepped up to give him the elevator pitch: “She contributes significantly to the start-up ecosystem in South-east Asia. It goes without saying that she has the X factor and is an absolute one-of-a-kind.”

Chua has set her sights on growing entrepreneur-friendly ecosystems beyond Singapore. The consulting arm of her company has worked with government agencies in Brunei to conduct boot camps and acceleration programmes. “We help them promote their start-up and high-growth stage ecosystems and connect them to the rest of Asia-Pacific,” she says.

Together with South Korean regulatory and clinical research provider C&R Healthcare Global, Golden Equator has set up the Korea-Singapore Healthcare Incubator to help Korean medtech companies expand in Singapore and the region.

She sees a wealth of potential in this venture, particularly in the amount of technologically advanced products that could potentially be launched in this part of the world. “I was recently given a packet of powder mouthwash that’s designed to be more suitable for Asian palates,” says Chua. “The aim is to introduce these innovations here; sometimes, foreign companies just don’t know how to promote their product abroad.”

Prepping the next generation

Her soft spot for working with entrepreneurs can perhaps be traced at least partially to her own ambitions to strike it out on her own. “I didn’t come from a rich family that could support my entrepreneurial efforts, but the calling has always been to do a business of my own and it is not something I could run away from,” she says.

She started Golden Equator when she was 32, relatively late by today’s young upstart standards because she felt she was “too young to take the risk” when she was in her 20s. Chua, who holds a double bachelor’s in economics and South-east Asian studies from the National University of Singapore, says she finds that the education system still does not encourage sufficient risk-taking among students or prepare them enough for the future.

In the office, this is a gap she is constantly trying to bridge with her staff. “I want to create a culture that makes sense for the growth of young people. We talk about how it is okay to make mistakes and fail as long as they are able to come to terms with what they are good at doing,” she says. In an effort to groom young leaders, she conducts monthly skip-level coaching with staff in the office to help them achieve their career goals.

The company has also launched a Nextgen programme for its clients where members get mentored by industry leaders, including Chua, and are given cross-functional exposure across industries including Golden Equator’s group of businesses, and through a networks of partners and advisers.

She says: “I’m very pro-next generation. In the work we do – the technology we try to create and the programmes we have – it is always about creating better opportunities and better prospects for the future.”

The making of an exclusive business club

Chua’s vision is built into Spectrum, which she says is her company’s highest capital investment thus far. During its construction, she indulged in her interest in interior design and worked closely with the designers to bring her vision for the space to life. Here are some of the 28,000 sq ft club’s most unique features.

Back To The Future

The open concept office space has “parking space” for hoverboards and Segways that employees can use to zip around the office, should they feel so inclined.

There is a standing-only meeting room to help keep meetings short and sweet – though an associate whispers to us that they sometimes even conduct meetings while holding the “plank pose”, to speed things up even more.

Push on the alcohol shelf in Chua’s office, where she displays gifts from business associates, and it opens to reveal a secret entrance to Spectrum’s whisky room. The handsome space boasts a wall-length bar stocked with over 300 labels. What’s lesser known is that there are also three wine fridges curated by respected wine connoisseur Dr N.K. Yong and his wife, Melina. The entire drink list is available for members to peruse via Spectrum’s app.

(RELATED: How private members-only clubs in Singapore are attracting millennials)

“Sometimes, I need to be away from the office and stare at the sea. I also write and create mind maps – I’ll even tape pieces of A4 paper together when the mind maps get too large.”

Love Them, Feed Them

An accomplished cook who specialises in Asian food, Chua has even teamed up with Son to prepare dry laksa for the Golden Equator team. She says: “If I had not started Golden Equator, I would be a home chef making food for people I care about.”

“My current favourite whiskies are Mortlach and the Balvenie 17 Double Wood. I don’t like peaty whiskies,” Chua says. In fact, Golden Equator’s latest corporate gift for VIPs is a bottle of Mortlach whisky inscribed with its logo. Collector’s-worthy swag indeed.