Some designers set the trends, others capitalise on them. Larry Peh, however, is master of the essence. 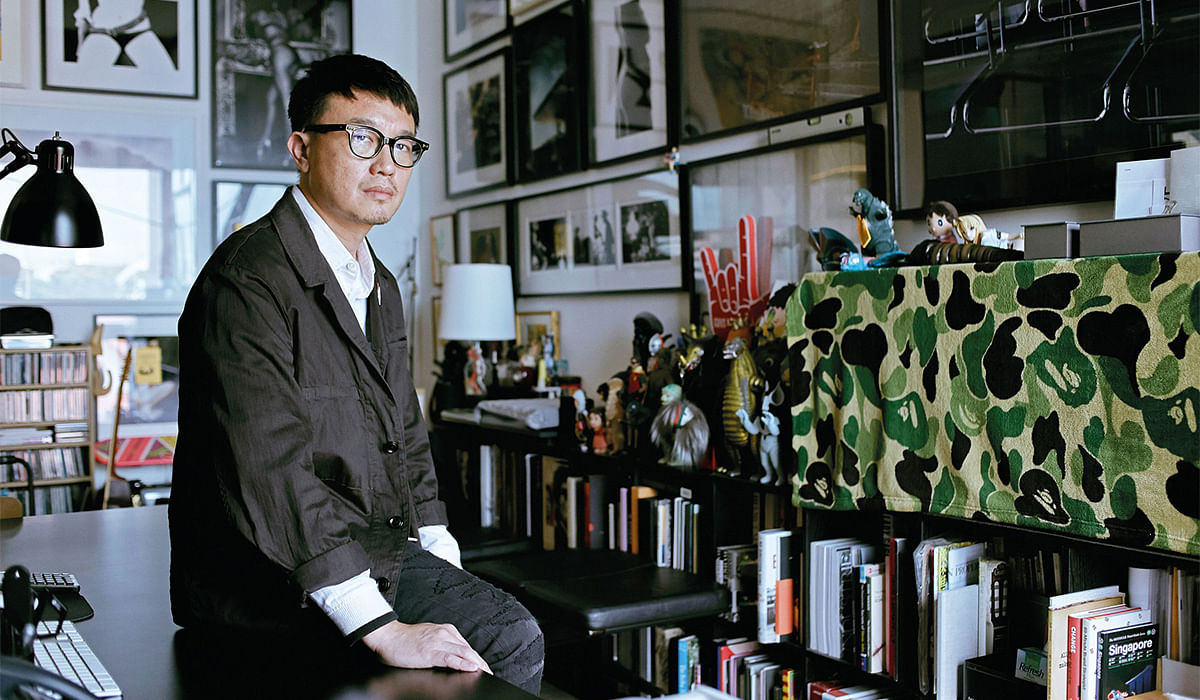 [dropcap size=small]M[/dropcap]ulti-award winning designer Larry Peh is a quiet soul. Thirty minutes into our conversation, his voice hoarsens and he excuses himself to get a drink, admitting that he’s not used to talking so much, not even in presentations. “We are a bunch of introverts here,” he says of his staff working in the office.

Some people are like Yoda, sparse in words and grand gestures, reserving their sound and fury for things that matter. For Peh, it’s listening, thinking, analysing, creating – the raison d’etre of &Larry, the creative agency he set up in 2005. That save-the-fireworks-for- the-clients approach has served him well and, today, they are the ones that seek him out – boldfaced names like Google, Louis Vuitton, Bynd Artisan, Economic Development Board (EDB) and GIC. They tap the firm’s services from branding and advertising to design of product, exhibition, graphics and digital content.

He pulls out a quote that resonates with him. “Be regular and orderly in your life, so that you may be violent and original in your work.” It’s a line by Gustave Flaubert, the 19th-century French novelist renowned for his dogged dedication to perfecting his words. Peh is no different, investing time to listen to clients, internalising their stories, so that he can deliver a unique solution. He calls the process “rigour”, adding: “We stab ourselves in the meeting room, so we can rise as saints in front of our clients.” It works. Peh says that of 20 clients, 19 will accept his first pitch.

There was the time when GIC was renovating its space and saw – and loved – the installations &Larry had done for the EDB office. After conducting research into what defines Singapore’s sovereign wealth fund and recognising the values of the five pillars of its logo, Peh suggested five narrow LED screens for the reception area, each showing, in real time, the weather in the cities where GIC’s offices are located. The pillars are linked by a common element, a horizon over a body of water, symbolising that while changes occur, the horizon is constant – which captures what GIC is about. The piece is called Primed For Change and everyone loved the idea from the start.

But the project that won &Larry a President’s Design Award in 2016 was its work for Bynd Artisan, a book-binding and leather stationery company that has catapulted itself from start-up to the pride of Singapore retail in five years. Through interviews with co-founder Winnie Chan, Peh realised, though she did not state it explicitly, that many craftsmen in Chan’s family stationery business saw her grow up.

He says: “I thought that was the driving force behind Bynd Artisan. The craftsmen have been working at the company for 20 years, she hated to see them go. When they retire, their skills, their stories will be lost. I realised that that emotional bond is worth sharing. That’s how we came up with the brand essence: “Something Worth Sharing”.

The award was his second. He had won the President’s Design Award for Designer of the Year two years prior to that. But recognition of his work happened way before. In 2012, he was voted by Perspective Global as one of the top 40 design talents under the age of 40 in Asia, and featured in +81 Japan as one of the next generation of creatives in Asia. He was also featured in magazines by notable publishers Wallpaper*, Taschen and Gestalten.

Now 42, he is driven by the desire to make a dent in history, the way that Dieter Rams did for Braun, and Charles and Ray Eames for chairs. They made a mark with their timeless designs. Says Peh: “I want things to last. I want simplicity.”

“We are not pop,” he adds – even if pop sells, as proven by his refusal to design trendy oversized T-shirts for his niche clothing label Faculty. Amid the tension of balancing client work with his own integrity, Peh has formulated his definition of success: “To be continually relevant to the times, without losing your soul.”

(RELATED: Singaporean designer Olivia Lee: I grew up in an environment where I was never told not to try or explore something.”)