Mastery of angular design makes this striking abode stand out in its quiet neighbourhood. 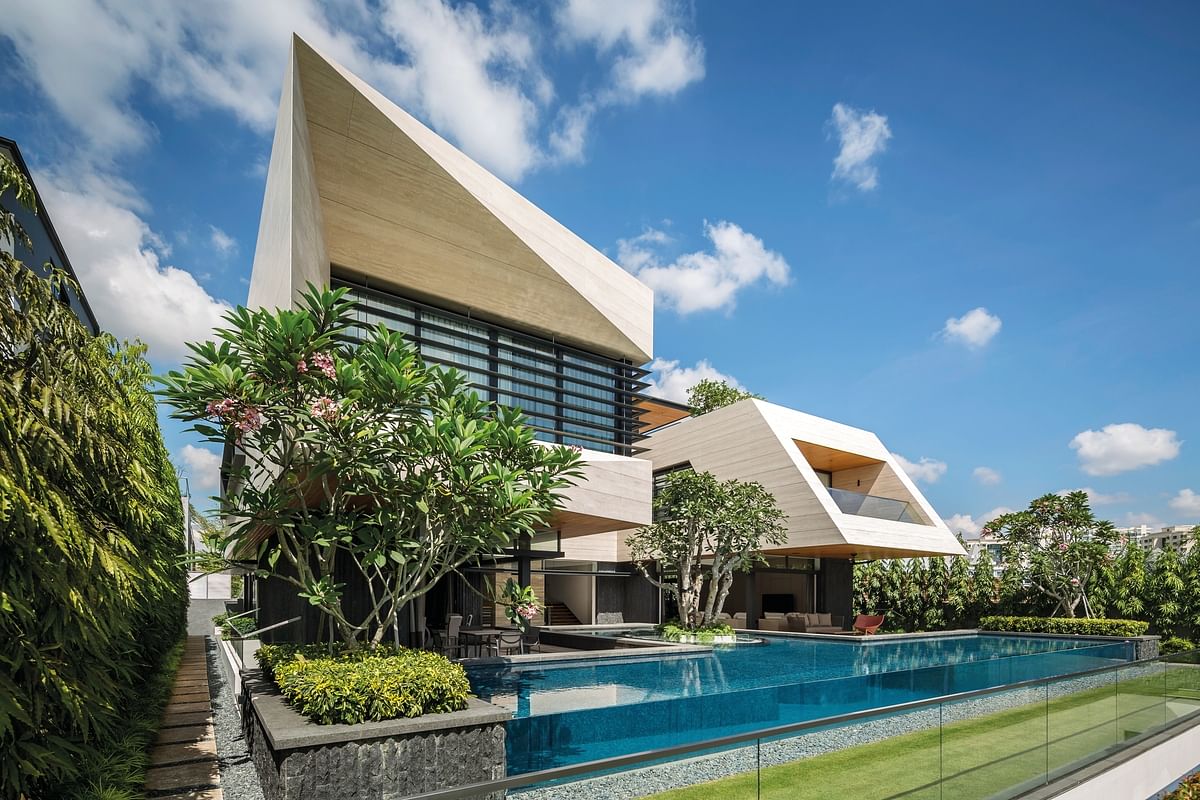 [dropcap size=small]T[/dropcap]his house, tucked in a quiet neighbourhood in north-eastern Singapore, is hard to ignore, standing out as it does from the other more conventional-looking bungalows along the same street. Its distinctive facade with unnaturally sharp angles is reminiscent of Zaha Hadid’s early work, conjuring up ideas of speed and sleek urbanity.

“The clients were clear that they didn’t want anything boring,” says Robin Tan of Wallflower Architecture and Design. “They wanted something outstanding, something with street presence.”

03 As the house
is a located
in a densely populated spot, it is designed to look inwards, towards the pool, for greater privacy.

04 The T-shaped pool runs the length of 25m along the front
of the property.
It also sits above ground, instead of being sunken in, because of space restrictions due to the garage below.

For Tan, architecture always starts with site planning and the sloping plot of land had its own particular set of characteristics that dictated certain design decisions. Elevated 4m above ground, the plot allowed for site space to be increased by a full 5,000 sq ft, as the driveway and carpark could be neatly tucked underground.

But the density of the neighbourhood, with houses crammed in together, led to a sense of a lack of both space and privacy. “There is a tall structure on one side, and an old house on the other side which would in time also be built up, so the idea was to be defensive, with ‘shields’, and to look inwards. And this formed the basis of how the house was designed, to handle the future,” explains Tan. The result is a U-shaped structure, with the public spaces for dining, living and entertaining on the ground floor, pivoting around the central pool.

(RELATED: The luxury home with an open-air aviary built for the owner’s beloved pet parrots)

After that, Tan turned his attention to the look of the house, which became a highly collaborative process with the clients. He experimented with shapes and manipulated forms on the computer to come up with a pleasing design. But the challenge came when it had to be translated into reality.

“TO ME, GOOD DESIGN IS SOMETHING WHICH PROVIDES SOLUTIONS TO SEVERAL PROBLEMS AT ONCE.”

“It was because we had chosen to use stone, and it was only later that we realised the limitations of the material,” Tan says, when it became apparent that maintaining the sharp angles with the beige travertine they had decided to clad the facade with was going to be challenging. “Contractors kept telling us that it just couldn’t be done.”

Undeterred, he relied on sound engineering expertise to get the job done, using steel plates to extend out from the concrete base wall to form the shape, before cladding them with travertine cut to achieve the sharp points.

“My contractors and engineers are used to me asking the impossible,” he says with a laugh, as he points out another engineering feat – the circular “floating” planter in the middle of the pool. It is positioned above the garage and holds a two-tonne frangipani tree, and is supported entirely by two thin, barely noticeable beams.

“MY CONTRACTORS AND ENGINEERS ARE USED TO ME ASKING THE IMPOSSIBLE.”

TAN, ON BUILDING A “FLOATING” PLANTER IN THE MIDDLE OF THE POOL

“To me, good design is something which provides solutions to several problems at once,” Tan says.

“The tree planter allows daylight and ventilation into the garage below, while providing a focal point for the pool. It also balances out the glass and steel and stone with some greenery.”

Indeed, stepping into the garage below the house is a surprisingly pleasant experience, with none of the stifling, stagnant heat usually associated with such places. Aside from the planter, light wells at the sides and front of the underground space fill the carpark with natural light, as well as currents of cool, fresh, moving air.

Throughout the house, thoughtful touches like this prevail – decisions taken for both practical and aesthetic reasons. Take for instance the Statuario marble flooring – chosen because of its cooling effect – perfectly bookmatched all the way into the elevator, or the artistic way blocks of granite “skin” were sliced and arranged in the walls of the basement garage.

The tropical climate has also been taken into account, with sun-shading fins on the second floor, recessed windows to deal with torrential downpours, and sliding doors that can be tucked away completely so that the entire ground floor can be opened up for natural ventilation.

Wallflower houses often seem markedly different from one another, because the architectural signature is subtle and only noticeable if the entire portfolio is viewed at the same time. This is the result of a principle that Tan applies to every single house he designs.

“I see myself as the ghostwriter of a story,” he shares. “I’m essentially telling someone else’s story so it’s really not about what I want, but what the homeowner wants. Because, in the end, the main character of the story – and the house – has to be the owner.”