Miele’s recent Milan showcase proves that the German appliance giant is at the forefront of this intuitive systems revolution. 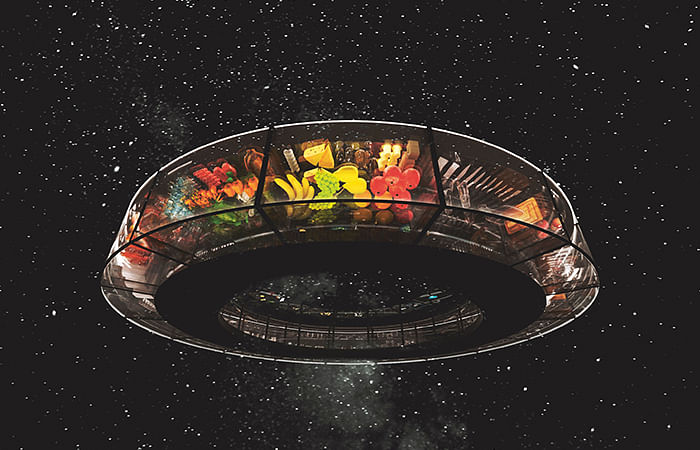 [dropcap size=small]I[/dropcap]magine, if you will, a kitchen so intelligent that it can detect the type of cooking vessel you are holding (say, a casserole dish), ready the appropriate appliance (an oven) to receive it, prompt you when the oven door is opening, and automatically adjust the temperature and moisture settings throughout the cooking process to achieve the best results. Think lasagne or shepherd’s pies with consistently crispy crusts and perfectly moist insides.

Sounds like science fiction? Not if German appliance maker Miele can help it. In Milan in April 2016, the Gutersloh-based company unveiled its futuristic concept, The Invisible Kitchen, to an international audience of architects, interior designers, property developers, distributors, retailers and the press. The idea was to fire the imagination, and show the possibility of how we could live in the not-too-distant future.

But as Miele’s chief designer Andreas Enslin explains, most of the technology, such as the brand’s proprietary Tempcontrol and Klimagaren (Moisture Plus), already exists. “What is totally new is how we are bringing it all together for the first time,” he says. Tempcontrol allows precise temperature control, preventing food from burning during frying. It is fitted in Miele’s current range of induction hobs with the Tempcontrol logo. Meanwhile, the Moisture Plus steam injection system is a feature of Miele’s current Generation 6000 convection ovens.

In Miele’s vision, the kitchen of the future is one where all appliances and work surfaces are connected and communicate seamlessly. Interactive worktops will use touchscreen technology, just as smartphones and tablets do. But they’ll be able to do much more. Say, you’ve placed the ingredients for a recipe on the worktop. The intuitive surface will recognise each item, and reveal information on origins, weight, nutritional value, ideal preparation methods and use-by dates.

“The system is tantamount to being a cooking adviser,” says Enslin. “It provides the assistance needed before things can go wrong.”

When you place a cooking vessel on the hob, the surface will recognise that vessel based on its make, shape and weight, and automatically proceed to heat it to the precise temperature needed for the recipe you are following. At no point during the cooking process do you have to watch the stove, so to speak. The Invisible Kitchen, predicts Miele, will prompt you when everything is ready. If you are otherwise engaged, or have lost track of time, the hob will keep the food warm. If there are leftovers, the Kitchen will advise which temperature zone of the fridge is best for storage, as well as provide consume-by reminders.

To help illustrate these concepts, Miele turned to Berlin-based agency Whitevoid, a specialist in interactive installations. Together, the two companies transformed an industrial space into a quasi-futuristic setting anchored by an LED-lit, ring-shaped glass-and-steel structure measuring 8m across. All in, it took seven months to put together. “We did not have time for prototypes. This is a prototype!” quips Enslin.

The showcase took place during the same week as Eurocucina, arguably the largest and most glamorous international trade show for kitchen industry professionals. However, The Invisible Kitchen was not staged at Eurocucina itself (at Fiera Milano in Rho), but in the bustling design district of Zona Tortona. Executive director Markus Miele explains: “We wanted to do something that tells people more about the brand than just the appliances. When you present the future, you have to present it in a different way. There is a lot of traffic at Zona Tortona – a lot of architects and designers (visit the area).”

Staging The Invisible Kitchen off-site also gave Miele the opportunity to boost its presence on social media. “Prior to that, we were not active in social media,” explains Executive director Reinhard Zinkann. (Zinkann and Markus Miele are fourth-generation owners of the 117-year-old company. The Miele family own 51 per cent while the Zinkanns, 49 per cent.) Zinkann adds that reception to the Kitchen on blogs, Twitter, Facebook and Instagram is crucial for both image building and connecting with the brand’s future client base.

“The younger generation will be our customers, when the products come to market,” he says. Although there is no fixed timeline for the Kitchen’s development, Zinkann predicts that it could be anything from “five to 10 years’ time”. He says: “I would guess something in between.” For Enslin, it will depend on how soon a sophisticated artificial neural network, like Google Deepmind’s Alphago, is developed. “Neural networks are not programmes; they are software machines that are able to make estimations, like our brains,” he explains.

Tempcontrol, which was released in 2015, already has a small neural network that governs the temperature sensors. So, going by Zinkann’s prediction, Miele’s Invisible Kitchen could become reality by the early 2020s.

Five things that will become obsolete in the kitchen of tomorrow

If Miele’s The Invisible Kitchen becomes reality, here are five things that are destined to go the way of the dodo.

With the worktop’s ability to measure the precise weight of multiple items simultaneously, even the most advanced digital scales of today seem woefully inadequate.

Virtually any receptacle can be used as a measuring cup, as the worktop can gauge the volume of its contents.

Sensors in the hobs and ovens will be able to measure precisely the temperature of a pot on the boil or a casserole in the roaster.

Who needs tablets when your entire worktop functions as an interactive touchscreen?

Unless they are tomes handed down from previous generations, recipe books seem quaint and anachronistic.

Where Have All The Handles Gone?

With living spaces increasingly melding into kitchen and/or dining areas, there has never been a greater need for kitchen appliances to look as sleek as your Macbook Pro, Sony Bravia or Bang & Olufsen Beolab. Miele has known this for some time; its range of built-in ovens, hobs and hoods, fridges and espresso machines are consistently as easy on the eye as they are a pleasure to use.

At Eurocucina, the brand took things to the next level, unveiling its Artline series of completely handleless built-in appliances that blend seamlessly with flush furniture fronts. When asked about the significance of this development, the brand’s executive director, Markus Miele, replies: “In the last couple of years, more and more kitchens (are being designed with handleless cabinet doors). It looks nice, but then you also have to come up with a solution for the appliances. We looked deep into that issue, and found a way to open the appliances by touch.”

Indeed, a gentle touch of the sensor integrated in the fascia is all it takes to open the appliance. Miele calls this the “Touch2open” function, but this apparent simplicity belies a complex operation. The sensor triggers a small motorised device, which releases the door but also controls its motion until it reaches the fully open position. Doors are closed manually.

“We showed the Artline at [electronics trade show] IFA 2015 to some architects and designers, and they really liked it,” says Markus Miele. And they are not the only ones. According to executive director Reinhard Zinkann, the response has also been very positive among high-end kitchen manufacturers. “There is more and more a trend that appliances are hidden,” he offers. “In those cases, the handle would get in the way. As such, kitchen manufacturers love (the Artline).”

The Artline range encompasses convection-, microwave- and combination steam ovens; warmer- and vacuum-sealing drawers; and a wine chiller. The models are based on existing appliances in Miele’s current G 6000 portfolio. Besides the Touch2open function, the series also has a new colour, graphite grey, which is a better match for muted palettes than the current brilliant white or obsidian black.

(RELATED: Ritz-Carlton Residences on Cairnhill have Ong Chih Ching to thank for thoughtfully designed kitchens, which include Miele kitchen appliances.)

So the modern dishwasher is more or less fully evolved. Like a crocodile or a shark, its form is perfect, right? Well, think again. Miele’s new G 6000 Ecoflex dishwasher boasts two key upgrades that might leave you floored, as it did us during its launch at Eurocucina.

Dishwashers that promise low energy and water consumption often compensate by having long cycle times of two or more hours. Worse still, the crockery and cutlery emerge without being perfectly cleaned. This is a common bugbear that Miele sought to address, using a specially formulated fast-dissolving tablet (it takes only two to three minutes to dissolve fully) and a new Quickpowerwash programme that washes and dries the load in just 58 minutes – quite the godsend, if one entertains frequently.

This it manages to do thanks to an Ecotech heat storage unit, located in the right-hand side panel. This device comprises two separate water circuits. One circuit transports fresh tap water, while the other contains hot water from the last programme stage. The hot water circulates in a series of loops to heat the fresh water. By so doing, it reduces the electricity required to heat the incoming water supply. According to Miele, this translates to annual savings of about 50kWh in an average household.

The second innovation is more practical, concerning the configuration of the two-tier internal baskets. The new design is something that managing director Markus Miele appreciates. “What I like are the many ideas we included in the baskets,” he says. “When it comes to stemware or delicate glasses, I had the problem of storing them the right way. We’ve introduced some features that make it much easier. They are little things, but those little things add up to make a great machine.”

For instance, hinged spikes in the upper and lower baskets, which accommodate tall stemware, large platters or bulky pans and dishes. Or the new 3-D cutlery drawer above the upper basket, which features two hinged rows of spikes in the central section. These can be lowered to create space for, say, a large ladle. But in the upright position, they create partitions so that knives can be securely positioned and thoroughly washed and dried on all sides.