Meet the families behind Singapore’s most iconic buildings

These four buildings have been holding history in Singapore for the families that built their fortune with them. 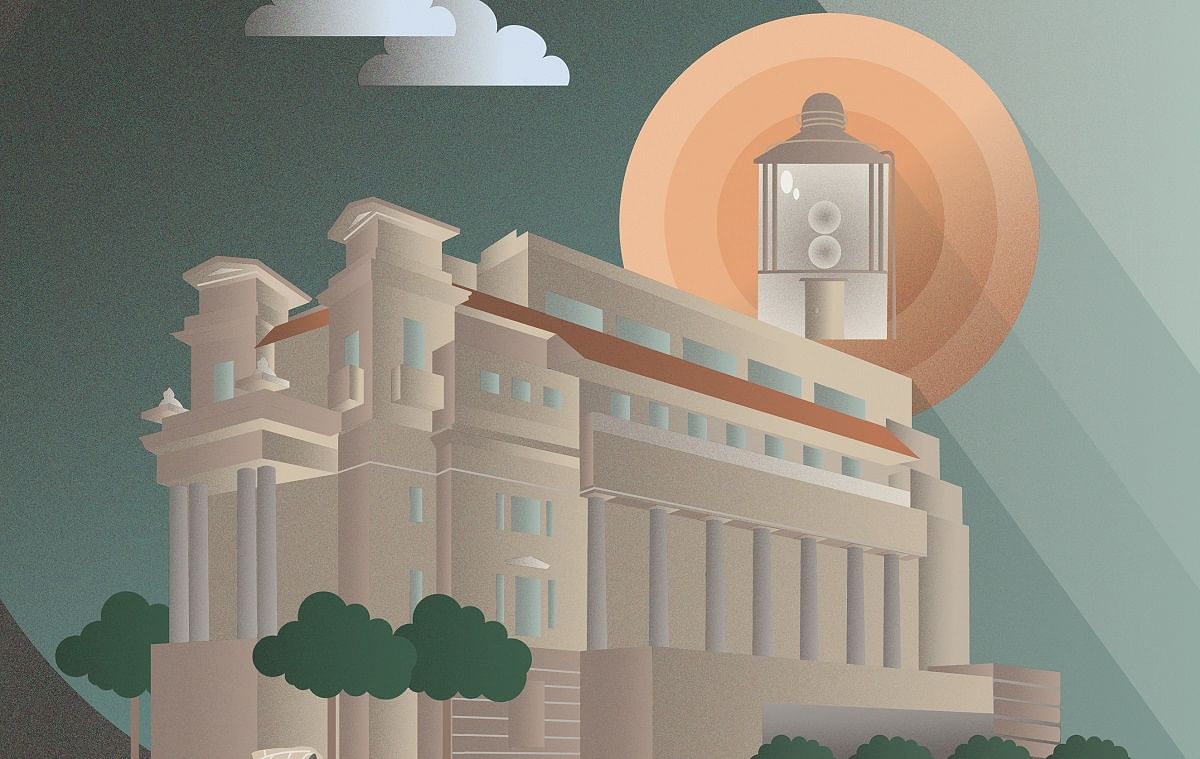 [dropcap size=small]P[/dropcap]ick up any postcard of Singapore and you’ll likely find landmarks like Marina Bay Sands, Artscience Museum and the Singapore Flyer dominating the skyline. However, Singapore’s most iconic buildings aren’t (just) the shiny ones that have sprouted over the last decade in all their architecturally avant-garde glory. They’re the ones that saw the nation through post-war uncertainties and were raised by clans who forged through it all to build their business empires.

These mighty structures are their trophies, but they are also reminders of how far we’ve come.

The structure was built with Aberdeen granite, finished with Shanghai plaster, and required pilings up to 30m deep to support it.

The old lighthouse, once known as the Fullerton Light, replaced the 103-year-old Fort Canning Light because of the former’s seafront location. It was decommissioned in 1979 because the onset of high-rise buildings in the area would have blocked its glow.

The building was designed by Shanghai-based architects Major P.H. Keys and F. Dowdeswell, whose firm was also responsible for the Capitol Theatre, Capitol Building and Singapore General Hospital.

Greek Classical architecture, exemplified by the Parthenon in Athens, was chosen for the design because of its ability to convey power and splendour.

None of this came easy for the group’s founder, the late Ng Teng Fong. After moving to Singapore from China’s Fujian province, he decided not to take over his family’s soya sauce and grocery business, and instead tried to make it on his own. After a failed venture with a provision shop that left him so impoverished he reportedly had to give up one of his eight children, Ng discovered he had a knack for property development. He set up Far East Organization (FEO) around 1960, and the rest is history.

FEO’s trendier establishments are easily recognisable — Orchard Central, Oasia Hotel Downtown, Nordcom I and so on — but Ng was nicknamed the “King of Orchard Road” because of how much he contributed to the shopping district. Far East Shopping Centre, for instance, was the first mall to have an atrium with external escalators, while Lucky Plaza had its bubble lifts. But the group’s most iconic project is easily The Fullerton Hotel Singapore.

The hotel was formerly known as the Fullerton Building and was commissioned in 1919 to mark Singapore’s centennial celebrations. Named after Robert Fullerton, the first governor of the Straits Settlements, it was completed in 1928, and served as an office building and centre for trade and commerce. It was also home to the Singapore Club, an all-male club reserved for the colonial elite, and featured facilities like a billiards room and over 30 bedrooms for its members. Because it was funded by taxpayers’ dollars and housed in a public building, it wasn’t exactly well- received by the masses.

After Singapore gained independence, it became home to several government offices, including the Economic Development Board, Inland Revenue Authority, and the General Post Office. It was a natural choice: Its Edwardian baroque architecture made it the grandest building around, its lighthouse guided ships to harbour, and – since its construction preceded that of the Merlion – it served as the symbol for Singapore.

When the Government finally understood the value behind its location, it allowed Sino Land (the Hong Kong-headquartered sister company of FEO led by Robert) to commercialise the building, transforming it into the six-star Fullerton Hotel following a $400 million infusion into its redevelopment.

It was officially opened on Jan 1, 2001 by then prime minister Goh Chok Tong (who began his political career in the building in the 1960s), and the 400-room hotel was eventually gazetted in 2015 as Singapore’s 71st National Monument. The Singapore icon celebrates its 90th anniversary this year.

(Related: Leica opens new gallery in The Fullerton Hotel dedicated to photographers and their art)

The Government encouraged Hong Png to build 500,000 sq ft of space via the building, and it was only after adding four storeys of residential units that he met the goal.

Swan & Maclaren, Singapore’s oldest architectural firm and the head architect of this project, conceived the building to be a “vertical town”. In addition to the shopping arcade, coffee house and Japanese restaurant in the basement, provisions were also made for a nightclub and apartments.

Before the Stock Exchange of Singapore became the Singapore Exchange and moved to its own building, it operated out of the seventh and eighth floor of the Hong Leong Building, where it enjoyed an entirely exclusive set of lifts.

The site used to be occupied by 28 shophouses, all owned by Hong Leong Holdings. The group paid its tenants $1.2 million as compensation for moving out.

When Kwek Hong Png first arrived in Singapore in 1928, he was virtually destitute. After more than a decade of scrupulous saving, he finally managed to open a small shop in 1941. He named it the Hong Leong Company, and in the years to come, it would make his family one of the wealthiest in Asia.

While the company’s original bread and butter was trading construction materials, it has since diversified into property, hospitality and finance, with headquarters in Malaysia and Singapore. In fact, City Developments Limited (currently led by Kwek Leng Beng, Hong Png’s son) is responsible for many modern landmarks here, including Republic Plaza, South Beach Singapore, Palais Renaissance and countless others. But the one that’s closest to the family’s heart is no doubt the Hong Leong Building on Raffles Quay, which was completed in 1976.

The building is, by Hong Png’s own admission, not the most outstanding in the region, but still impressive by Singapore standards. With 45 storeys and about 965,000 sq ft of utility space, it remains one of the country’s largest towers. And given that it was built in a time of inflation, rising commodity prices, escalating wages and material shortages, kudos must be given for staying within the budget of approximately $50 million (excluding land).

The tower is crowned by a 40m-tall illuminated pyramid, and is complemented by the ornamental trellis that sits atop the adjacent Centennial Tower.

The facade is clad in white Italian granite and features protruding ledges that cast an ever- changing display of light and shadow throughout the day.

The impressive lobby is made more so with the addition of a stunning 15m by 8m mural by artist Frank Stella. Millenia Tower is the first in Singapore to feature an artwork by the acclaimed artist.

The entirety of the integrated development that is Millenia Singapore, which comprises Millenia Tower, Centennial Tower, Conrad Centennial Singapore and The Ritz-Carlton, Millenia Singapore, belongs to the Pontiac Land Group, presently controlled by the Kwee brothers: Liong Keng, Liong Tek, Liong Seen and Liong Phing. The group pegs itself as a luxury developer and, based on its other properties like Camden Medical and the 53W53 tower in New York, one with a lot of Pritzker Architecture Prize winners on speed dial.

One of Pontiac’s most arresting additions to the skyline is Millenia Tower. At 218m, the structure designed by Kevin Roche is the tallest building in the Marina Centre. Given its prime location near the waterfront, Roche designed it to maximise the number of window offices so that all the tenants could enjoy unobstructed views and abundant sunlight.

The Kwees’ fondness for good design goes hand-in-hand with a passion for art. All their properties feature striking sculptures, paintings or installations by prominent artists. Guests at Capella Singapore – also owned by Pontiac – can enjoy The Arc steel structures by Bernar Venet, while anyone in the vicinity of Millenia Walk would have seen the Six Brushstrokes sculptures by Roy Lichtenstein.

Up until Tanjong Pagar Centre was built, UOB Plaza One was one of the three tallest buildings in Singapore with a height of 280m, a record then shared by One Raffles Place and Republic Plaza.

Three years after UOB Plaza One was completed, the UOB Building was retrofitted to better match Tange’s rotating block design and renamed UOB Plaza Two. Its copper-tinted reflective glass has been replaced with grey granite for a more contemporary look.

Artist Fernando Botero’s iconic bronze sculpture of a bird sits along the river at UOB Plaza and has been featured in Bollywood movies.

Whether or not architect Lim Chong Keat had a stack of Chinese coins in mind when he transformed the decrepit Bonham Building into the UOB Building in 1974, we have to admit the comparison has been symbolically fortuitous for the bank.

The United Overseas Bank (UOB) was formerly known as the United Chinese Bank, during a time when Chinese banks had only customers from businessmen of their dialect groups. Then, chairman and managing director Wee Kheng Chiang staffed his bank with Hokkiens to serve its Hokkien clients.

As the bank grew, so did its customer base (and its diversity), and it changed its name to UOB when it opened its first overseas outpost in Hong Kong.

After 38 years, in 1973, the Wee family was able to buy over the entire Bonham Building, where their first rented offices were. They tore down the three-storey building and hired Architects Team 3 to build a 30-storey one in its place. Its distinctive octagonal base served as inspiration for Pritzker Architecture Prize winner Kenzo Tange to build its taller twin in the future.

Once it was built, the bank, under the leadership of Wee Cho Yaw (son of Kheng Chiang), quietly bought up land along Boat Quay and Chulia Street. Cho Yaw believed in his business, and in Singapore’s future development, and he was right – after almost 10 years of negotiating with numerous land owners, he was finally able to build a second tower, dubbed UOB Plaza One, which was completed in 1992 with 67 floors.

Though Tange’s tower did reference Lim’s original octagonal shape, the former’s vision is decidedly more modern, and he applied it once again to the redesign of the UOB Building, now known as UOB Plaza Two.

According to Tange, the twin-tower scheme for UOB Plaza took over a decade to hone, and saw the team going through 100 iterations before casting the final design in stone. Along with the retrofit, a podium stretching over Market Street was built to connect the two towers.

At the opening ceremony of UOB Plaza in 1995, the late Lee Kuan Yew, then senior minister of Singapore, spoke about meeting Wee Kheng Chiang during his early days of work as a young lawyer with Laycock and Ong. “(Wee) was a tall, slim, energetic, highly intelligent and very sociable man. When I visited him in his home in Kuching in the mid-1950s, he entertained me lavishly. He said the secret to his health and energy was daily swimming and champagne.”

(RELATED: How Karen Tan changes the lives of conserved buildings and landmarks in Singapore)