Agarwood: everything you need to know

Everything you need to know about this prized, aromatic commodity. 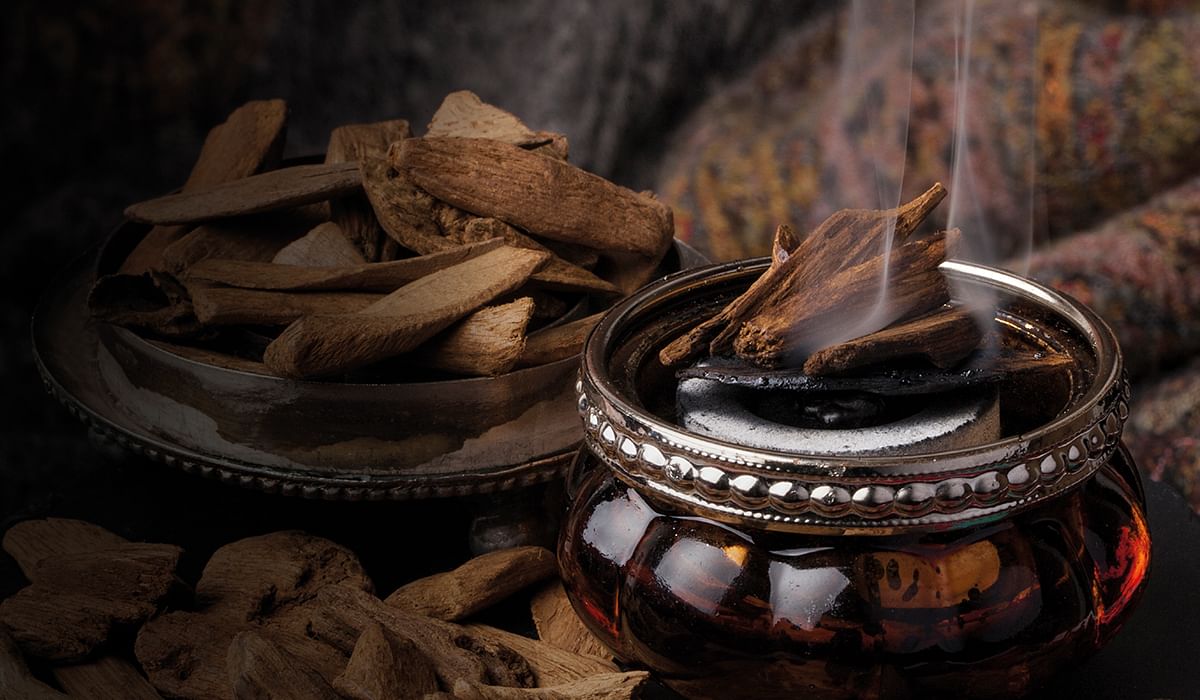 Mould is not something one typically desires in or on anything, but when it comes to the non-timber Aquilaria tree, an infestation of phialophora parasitica inspires legends and religious purposes – and leads to staggering amounts of money, thanks to a dark resin called agarwood or oud that it produces. When extracted or distilled, the fragrance of oud oil is so remarkable and valuable that it now costs more than gold.

According to the peer-reviewed scientific journal Frontiers in Plant Science, agarwood chips can cost as much as US$10,000 (S$14,169) per kilo or US$30,000 per kilo for the wood itself.

“The complexity of the agarwood’s scent spectrum is intriguing. You can’t easily categorise it as fruity, floral or grassy,” explains Jimmy Ho of Agarwood SG. “It might smell woody one moment and then remind you of honey before changing again to sour plum a few seconds later. It’s fascinating.”

Widely used as traditional medicine and as an aromatic food ingredient for centuries, it has also appeared in religious texts and in ceremonies across the world in the form of incense, perfume and beads.

Now, with increased affluence and awareness, as well as prominent figures like Jack Ma and Jet Li sporting agarwood accessories, its popularity has skyrocketed.

Nature, unfortunately, isn’t interested in accommodating big business. It’s impossible to tell how much resin a tree has produced (if any) without chopping it down, thus leading to rampant illegal logging and smuggling.

With the Aquilaria species on the brink of extinction, countries like Thailand and Vietnam started to cultivate their own agarwood.

“Consistency and sustainability are the benefits of cultivation done right. This helps to make it ideal for perfume and medicinal products,” continues Ho. “However, be wary of producers who don’t disclose their inoculation methods because they may not be using materials that are safe to consume or apply.” Compared to wild agarwood, cultivated agarwood also has a slightly weaker scent when burnt.

Whether you choose to wear it, ingest it or display it, it’s best to do your homework to ensure the oud oil comes from a sustainable source before basking in this sacred scent.

(Related: Call on this woodworking workshop for stunning custom carpentry)

Beauty and the bead

How to take care of agarwood bracelets 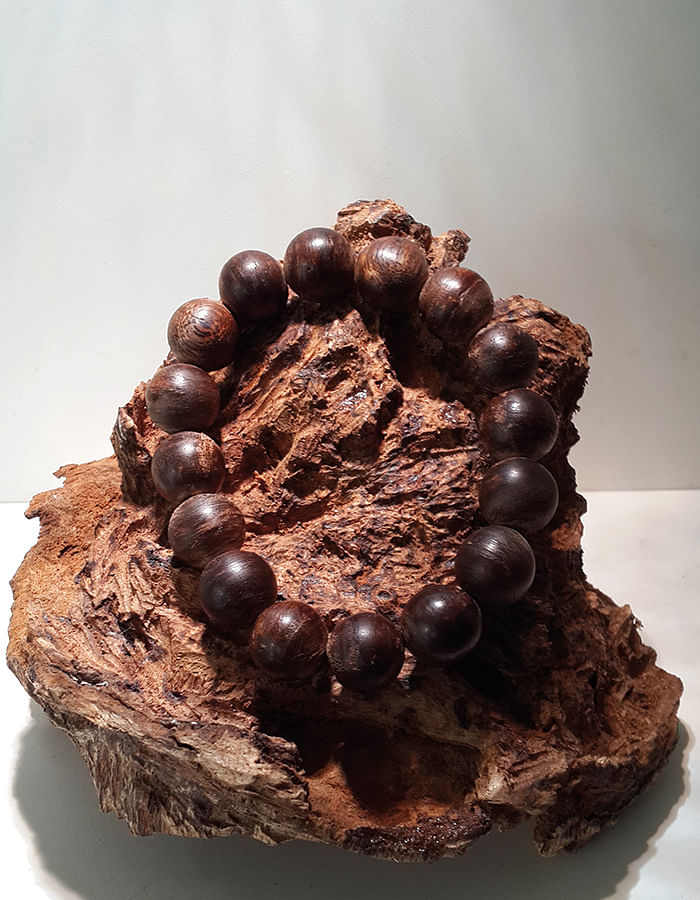 The porous nature of agarwood means it absorbs other scents easily. If you were to put a piece with agarwood next to sandalwood, the former will eventually take on the fragrance of the latter. Don’t wear your bracelets during barbecues or hot pot meals.

02 Don’t wear them during sports.

Agarwood beads can be easily damaged during vigorous outdoor activities. Save them for more elegant occasions, preferably in air-conditioning so sweat doesn’t get into the beads.

Precious accessories often need a little maintenance and the same holds true here. It’s best to keep the bracelet in a box containing powder from the same type of tree the beads were made from. This helps to replenish their fragrance, so to speak.

Kynam, the king of agarwood

A subset so rare no one knows how it’s formed. 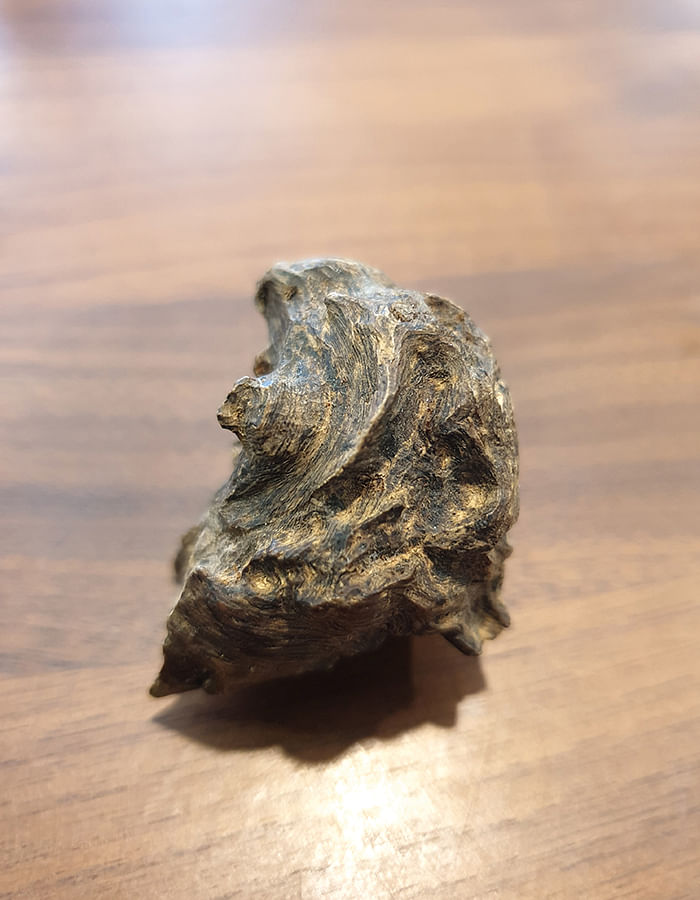 Experts might look for a slightly green or yellow tinge in the wood’s resin as an indication of kynam but most of the time you can only tell once the wood’s on the burner, releasing its unparalleled fragrance.

There’s an ancient Chinese saying that claims it takes three lifetimes of virtues before one is given the chance of encountering kynam; eight if you want the chance to use it. Also known as kyara in Japan, kynam is believed to be the king of all the agarwood species, with the most prized aroma of all oud. Its fragrance is so powerful and distinct that it doesn’t require heating for its scent to fill the room and, once inhaled, linger in the memory forever.

It owes its tremendous olfactory properties to the sheer amount of resin produced in the wood, a natural occurrence that still lacks scientific documentation and explanation. Some speculate that nesting bees and the honey produced influence the resin-forming process, while others reckon the tree was infected by an exceedingly rare type of fungus. Others think it might just be a matter of centuries-long ageing in just the right conditions.

The one thing everyone can agree on is that, unless you have a pro do the hunting for you, it takes more luck than money to get your hands on some. Agarwood specialist Alan Mahaffey, who has over 200 agarwood contacts in South-east Asia, managed to procure 16kg of 600-year-old kynam for one client. Costing US$20 million, it took him five years to find. Mahaffey is convinced that a 200-year-old tree in Cambodia’s Wat Bang Kradan temple could produce kynam. The military checkpoint beside it was set up to protect the tree. According to one of the temple monks, Japanese investors have offered to buy it for US$23 million, likely making it the most expensive tree in the world.

(Related: The smell of opulence: The new Amouroud Elixir Collection)

Agarwood’s multidimensionality makes it a prized ingredient in perfumes. Here are six fragrances that play with the oud’s sensuous notes.

Aqua Di Parma adds a little citrus to the richness of oud with an initial hit of bergamot and orange, then leaves the right amount of warmth with accents of coriander, leather, wood and musk.

By blending a host of scent profiles, from soft and sweet Bulgarian rose to smoky and bitter cypriol, Diptyque has created a crowd-pleasing introduction to the otherwise intimating world of oud.

Heady and intoxicating, this is as juicy as a blackberry brandy. Its top notes might be overpowering to some but give it time to mellow into soothing swirls of smoke and leather.

Compared to its sweeter sibling, Oud Satin Mood, this has a pronounced chamomile note that balances out the rose and oud combination. The additional papyrus note makes it a crisp, highly versatile fragrance.

According to the famously euphemistic Serge Lutens, this fragrance is supposed to be sin in a bottle. Though the oud note is fleeting, it’s expectedly warm, woody and just a little sweet at the end.

Arm yourself with the knowledge to reduce the chances of getting scammed with fake wood. 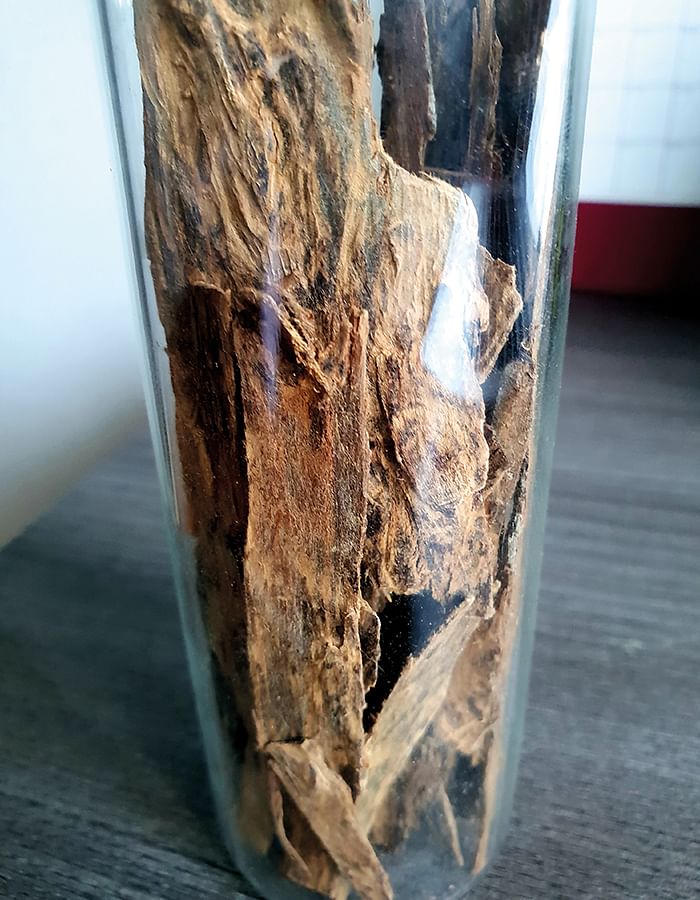 The most reliable way is to burn it. The smell produced from a genuine piece of agarwood will be more fragrant than a counterfeit. Of course, sellers are unlikely to let you set fire to their merchandise, but one way to tell fake agarwood beads at room temperature is the strength of its scent. Genuine beads exude a gentler fragrance you can only detect when holding it close to your nose, while you can smell fake ones from a distance. And despite its many different fragrance profiles, it should always smell pleasant, not pungent. 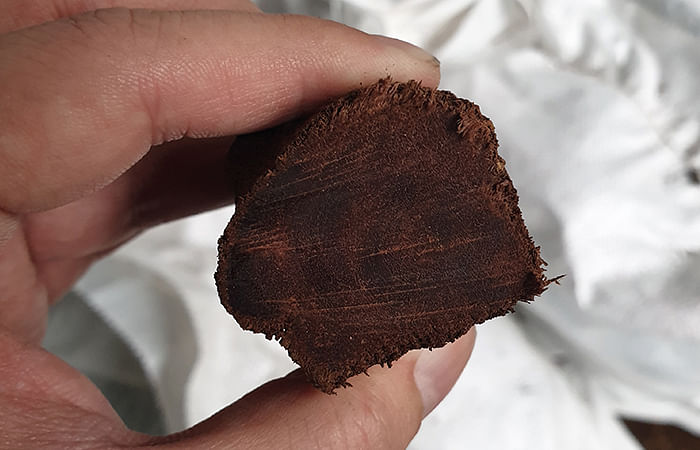 One of the most distinguishing features of agarwood is its veiny pattern. In its natural state, the wood of the Aquilaria tree is light brown and odourless. After being infected by phialophora parasitica, it gets darker, thanks to the resinous veins that produce agarwood and are also more uneven than cultivated agarwood. Fake wood, on the other hand, can appear almost completely black from dyes. If you can afford to, break the chip or bead in half and if the wood inside looks significantly lighter than the surface, you’ll know it has been painted. This will also tell you whether foreign objects have been inserted into the wood to make it seem heavier as heavily resinated agarwood (also known as “sinking grade”) fetches high prices.

(Related: Call on this woodworking workshop for stunning custom carpentry)