From watching her son at play to her father’s battle with dementia, multi-disciplinary designer and one half of Lekker Architects draws insight from daily occurrences. 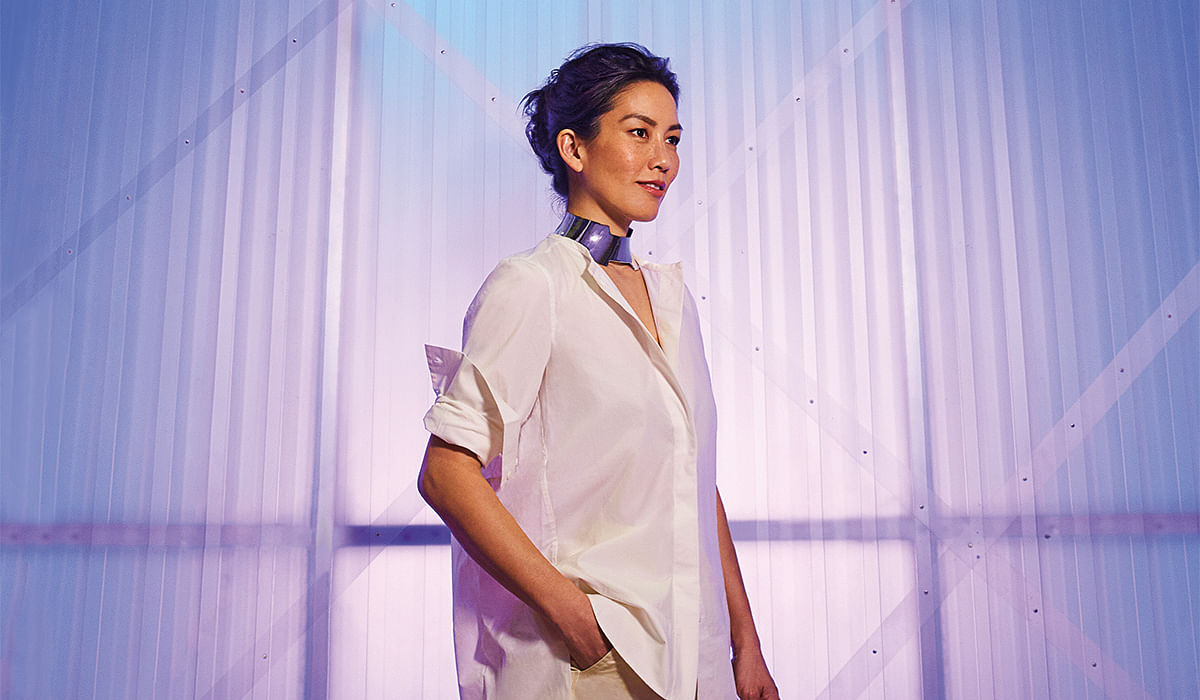 [dropcap size=small]I[/dropcap]t was a humble cardboard box that sparked her eureka moment. When architect Ong Ker Shing’s older son, Leo, was about three, he was gifted a fancy toy car. But it was the packaging that enthralled the child.

“That box stayed in his room for months. We kept asking him, ‘Why don’t you play with the car?’ and he said the box was so much more fun because it could be anything – like a lorry or a house,” says Ong, one half of the husband-and-wife duo behind Singapore-based multidisciplinary design practice Lekker Architects. “It became very clear to us that when we make play spaces for kids, the object should be open to interpretation and abstract enough. You can’t give them too much or it becomes one-dimensional and limits its lifetime,” says the mother of a girl and two boys, aged two to 10.

She applied this insight to the design of The Caterpillar’s Cove Child Development and Study Centre, a preschool in Jurong East which features multiple elements to encourage creative play. The project, which Ong, 43, co-designed with husband Joshua Comaroff for NTUC First Campus, went on to win the President’s Design Award, Design of the Year, in 2015.

01 IN HER CHILDREN’S SHOES

The Caterpillar’s Cove childcare centre won Design of the Year in the 2015 President’s Design Awards.

Inspired by her mother’s love for P3 sunglasses, Ong and her brother launched Rocket Eyewear, an e-commerce site.

Ong was behind French luxury brand Hermes’ window displays in Singapore, Malaysia and Thailand from 2013 to 2016.

Further recognition followed. In 2017, she was profiled in the URA book 20 under 45, which showcased the works of 20 of Singapore’s most promising architects under the age of 45. Ong’s portfolio is diverse, spanning childcare centres, window displays, a cemetery park in China, private homes, and landscape design. While her projects are aligned with her areas of study at Harvard University – she has a BA in fine arts, as well as a master’s both in architecture and landscape architecture – her work is often inspired by those closest to her. “You read about architects who go from small houses to bigger buildings; there is a progression. But when I look at the type of projects I’ve taken, it has really followed where I am in life,” she says. Her experience with children and Caterpillar’s Cove led to a book commissioned by the Lien Foundation focusing on 10 unusual sites that can be used for preschools.

(RELATED: Childcare centres for the one per cent)

Talking to Ong about her career is thus to delve into her personal life, from birth to death, and the joys and heartaches in between. In witnessing her father, a prominent surgeon, succumb to dementia, she has been spurred to examine the issues the elderly face in their daily lives. “There are aspects of dementia that are extreme ageing, in a way. I see in my dad a lot of issues such as those of perception, mobility and understanding the visual environment,” she says. “I think having lived through this stuff, it really makes you knowledgeable in these areas.”

Armed with insightful first-hand experience, Ong is currently undertaking eldercare projects to better the lives of the older generation. At the moment, she is designing a hospice day-care centre to contribute to creating more age-friendly neighbourhoods in Singapore. She has also been challenged by the Lien Foundation to study and propose environments that support intergenerational facilities, inclusive preschool education, purpose-built preschools and dementia homes.

At the same time, she is writing a book, tentatively titled Hack Your Dementia, which features tips and guidelines on how families can adapt their homes for those with the illness by improvising with readily available products from Ikea or Daiso. Sensory toys for kids, for example, can also be useful for patients with this condition. “Watching my kids grow up and my dad’s worsening dementia, those to me have been incredibly poignant. It makes sense how my career is rooted in those two things at the moment.” In a moving essay for the 2018 edition of The Birthday Book, an annual collection of writing by leading thinkers in Singapore, she juxtaposed the degeneration of her father to the growth of her children: “The illness first robbed him of his words, before becoming insatiable and taking everything else. I have watched my father regress to infanthood, whilst my three children emerged from it.”

Discomfort As A Teacher

“I think writing is a good discipline, so I force myself to do it. Just like how the idea for a design doesn’t just miraculously come to you, you have to do iterations, build a model, look at it and change it. You have to have the discipline to just sit there and do.”

Given the clarity and poignancy of her prose in The Birthday Book, one would expect Ong to be a natural writer. The opposite is true. Even though she is a prolific author – she has co-written a book with Comaro titled Horror in Architecture – she says she struggles with the craft. To stay sharp, however, she takes on new intellectual pursuits outside her comfort zone.

“I think writing is a good discipline, so I force myself to do it. Just like how the idea for a design doesn’t just miraculously come to you, you have to do iterations, build a model, look at it and change it. You have to have the discipline to just sit there and do.”

In the same vein, she has been accepting invitations to give architecture lectures at conferences around the world. “I think it is important to do stuff you are not good at to challenge yourself. I’d feel really disappointed in myself if I didn’t say yes,” says Ong. “Giving lectures is hard for me but I do it because it makes me a better speaker. I feel empowered that I can connect with different audiences.”

A woman of eclectic interests, Ong relishes applying her design chops to her entrepreneurial ventures, which include the now defunct home design shop Strangelets and Rocket Eyewear, an e-commerce brand specialising in P3-shaped sunglasses.

Dabbling in fashion and retail also offers a refreshing change from long-term architectural projects, she adds. The longest project she has worked on, the college landscape for the Yale-NUS campus, lasted about six years.

“The difficult thing about being an architect is that it is a very heavy profession, it’s a lot of responsibility. You need projects that are shorter to give you a different perspective,” says Ong. “You have to do frivolous things to have fun.”

For example, Rocket Eyewear, which she co-founded with her brother En Ming in 2017, was inspired by their mother’s love for this style of sunnies. Originally invented by the American army in the 1930s, P3s have been worn by celebrities including Grace Kelly and James Dean. For Rocket, the siblings tweaked the dimensions of the frame to better fit Asian faces.

“Rocket is really fun and gratifying. My job is to choose the different colours and materials, whether the frames are milky, metallic, tortoiseshell and so on. I get to be a dilettante about it and put my finger in the air and feel what’s good,” she says.

(RELATED: Architects to watch Andre Fu on why he loves hotel design and his upcoming projects)

The Art Of Compromise

On the flip side, she had to call it quits on some beloved businesses like Two Rabbits Smoky Chilli, which she co-founded with her brother. Based on a family recipe, they decided to stop selling the bottled chilli sauce in retail outlets as the market was too small to be sustainable. However, they still take the occasional private order via Facebook Messenger, she adds.

From 2008 to 2017, Ong and Comaro , together with three friends, ran Tiong Bahru boutique Strangelets. It featured an expertly curated selection of designer furnishings like statement lamps, fancy tableware and even tribal crafts.

Eventually, they made the decision to shutter Strangelets. “I got tired of wearing too many hats,” she explains. “It suddenly dawned on me that we could just say no, we don’t want to do it anymore. It was such an amazing revelation.”

Still, the experience of running a retail store left a deep impact on her professional life. “In the beginning, I put things in it that I loved. We designed the shop in such an esoteric way that looked really cool to us,” she recalls. “But nobody walked in and we were just wondering why, when the objects were so beautiful, so crafty. We asked people and they said they thought it was an art gallery.”

Finally, one of the partners, a banker, convinced Ong to also stock items that were “in the middle” to appeal to a wider range of people. It worked.

It is a lesson she has carried with her since then. “As designers, we sometimes take it too personally and think of it as your own genius or life work. I realised then that I can’t look at design purely through the lens of what I want to do and what I like.”

As designers, we sometimes take it too personally and think of it as your own genius or life work… I don’t get upset about compromise anymore, life is about compromise.”

It continues to be a useful ethos in her architectural practice which often involves close collaborations with clients on design concepts. “I don’t get upset about compromise anymore, life is about compromise.”

Style In The Family

For this interview, Ong came dressed in her grandmother’s button-up shirt with a crimson Comme des Garcons midi skirt from her mother.

“I have a thing with my mother, where I help her with her taxes and she ‘pays’ me with something from her wardrobe. This year she gave me a Simone Rocha skirt, a black lacy thing with roses on it.”

“I like to shop when I travel. One of my favourite boutiques is Mouki Mou in London.”

“My favourite fashion designers include Sofie D’Hoore from Belgium and Daniela Gregis from Italy. Of course, I love Japanese designers like Yohji Yamamoto.”

Words of wisdom from architects

Tan Kok Hiang, Forum Architects: Prioritise Your Children
“That whenever my children called, I should answer the phone. Then they’d know that I’m there for them at any time,” says Ong, who did indeed pick up a call from one of her kids during the interview.

Yip Yuen Hong, Ip:li Architects: Shades Of Grey
“You have to learn to get comfortable with the grey.” Ong says she only fully grasped this concept after having children. “You learn to live with mess, you learn to deal.”

Wong Mun Summ and Richard Hassell, Woha: Hakuna Matata
“They gave me my first real job in Singapore as an architect. I’ve always found them very reassuring and calming. They like to tell me not to take everything too seriously.”

(RELATED: Luxury homes: What does a Singapore architect’s home look like?)