By day, they design buildings. But in their free time, these four established architects pick up the brush. 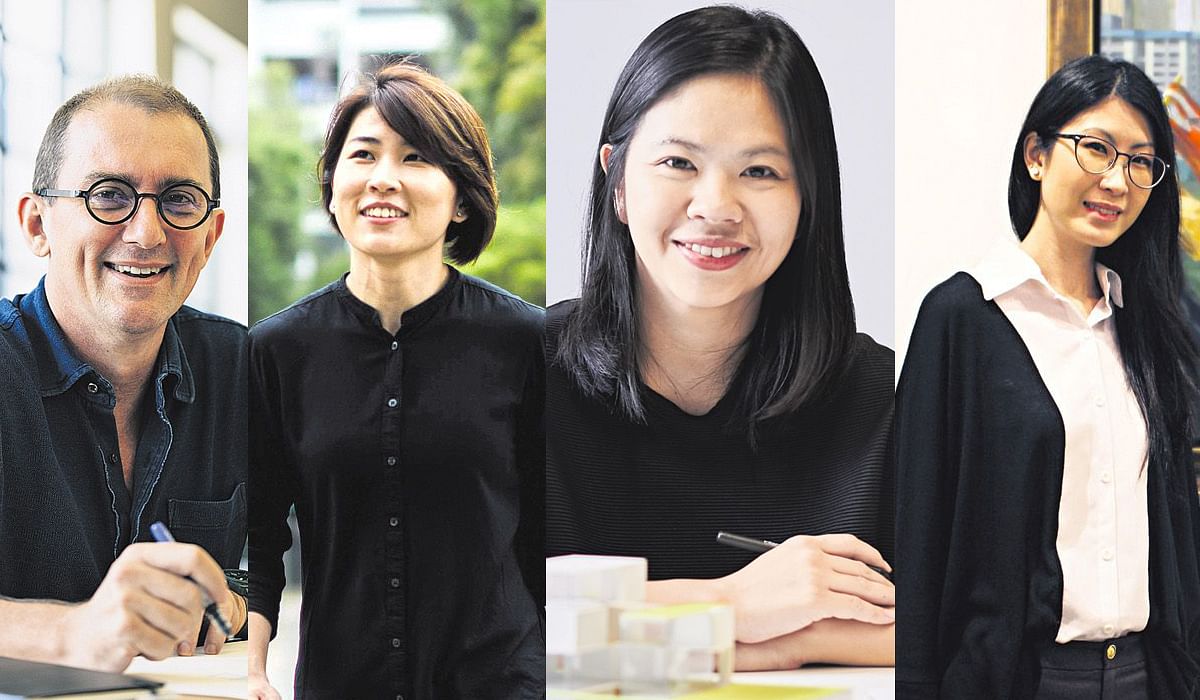 WOHA is a household name in Singapore architecture. Only recently, its Kampung Admiralty integrated housing complex was named World Building of The Year at the prestigious World Architecture Festival 2018. Yet WOHA Founding Director, Richard Hassell, 52, reveals that his current profession was an afterthought.

Growing up in Australia in a family of amateur artists, Mr Hassell always assumed he would be an artist. But once he started his degree in fine arts, he realised he didn’t want to make it his career. “I thought it was quite lonely. You work alone and it’s introspective. It suddenly didn’t appeal to me because I would rather do something more collaborative.” He turned to architecture – a way to pursue his other interests in math and science.

But he never stopped painting – even maintaining a large studio to work out of. “It took the pressure off it as a career so I could do it for the sheer pleasure.” In the early 2000s, he started experimenting with complex geometries and tessellations – the style he’s known for now. It was his acquisition of an Escher woodblock print that reminded him how much he’d enjoyed tiling back in high school.

It was a timely new beginning. “There are a lot of painters with souls to express, but I didn’t think that whatever I was doing was particularly interesting or significant,” he deadpans. Tessellating complex geometries, however, let him “go down the rabbit hole purely for the pleasure of finding out and making stuff” – unencumbered by the restrictions of architecture – and combining his interests in textiles, nature, and math.

(Related: Good class bungalows in Singapore: What you need to know before purchasing one)

His artworks often feature motifs from nature – snakes, lizards, butterflies – rendered in Batik-inspired graphics. “I felt that when I first gave up art school, I didn’t take into account my interest in science and all that stuff. Whereas tiling sort of synthesises them all together.” His prints and installations have since exhibited – and been sold – all over the world, including Madrid, New York and Lisboa. His art has also proved to be very beneficial to his work, with his intricate tilings incorporated into the designs of WOHA projects, such as on the facade of Crowne Plaza Changi Airport.

“Architects are always dealing with this relationship between the part and the whole, trying to find the most efficient yet not-boring way of using repetitive units like facade panels, floor tiles and, on a larger scale, apartment units” he explains. “With tiling, I get the ease of manufacturing – since there are only two, three pieces – but the intelligence is in the system of putting them together in an interesting way.”

His dream project? “It would be very interesting to do a science museum or a mathematical institute where you could really go crazy integrating art, math and architecture in a very strong way.”

(RELATED: These two architects are responsible for Singapore’s most unique houses)

Lee Hui Lian is quick to point out that doing art isn’t a relaxing, by-the-way activity for her. “I need to consciously set aside time and mentally prepare myself. I spend the same amount of energy doing art as I do architectural work,” she explains.

So much so that when she took part in a charity exhibition last year, she had to take leave from work – she’s now Associate at FARM, and adjunct lecturer at the National University of Singapore – to prepare for the show.

But she won’t give it up. “Art keeps me sane. As an architect, I’m always dealing with people, juggling expectations. With art, I’m not answerable to anyone. In a way, it is therapeutic because I’ll be so focused that I’m forced to rest my work brain.”

As the daughter of two artists, art has always been in her life. For much of her childhood in Klang, family bonding was exploring random kampungs and streets to sketch or paint. Art is a form of self expression, but the soft-spoken 33-year-old is also incredibly down-to-earth about it.

“It’s not so much about consciously using a certain colour palette to convey my mood, but when I look back at my works, I can get a sense of how I was feeling at that time.” She’d initially chosen architecture for pragmatic reasons, but on hindsight, her father might have seeded that idea in her. “He’s always been quite scientific and he would make me do things like detailed section drawings of his sculptures, or draw floor plans of the house. Maybe he meant to steer me towards architecture.”

Still, architecture is such a big part of her identity that she can’t envision giving it up for her art.

“Despite the stress, I feel there’s joy in architecture, in creating spaces. Just like how an art piece is composed, architecture is about its relation to the site and how spaces within relate to each other. It’s sometimes hard to justify voids in spaces to clients, but I feel that like pauses in music, they’re necessary to allow a place to breathe.”

(RELATED: How architect Ong Ker Shing is inspired by her life experiences)

One of her most cherished projects to date is an intermediate terrace house. After moving in, the client would often send photos depicting the way the light filtered through the space at various times of the day.

“It’s rare to receive feedback on the space in itself, or light quality, so that was really nice,” she recounts.

Tay Yan Ling did not realise till she was 21 that she had grapheme-colour synaesthesia, a condition that causes her to perceive numerals as colours. She’d just assumed it was normal for everyone.

After all, it made sense. “I always thought that mathematically, three plus four works because three was blue, four yellow, and seven green,” she explains. To her, this synaesthesia is probably why her paintings are so colourful, or why she’s so drawn to impressionists like Claude Monet and Joaquín Sorolla. “Their brush strokes are very light, bright and colourful. Whenever I look at those paintings, I feel good. There’s something optimistic about them.”

Ms Tay started painting even before primary school, continuing to Atlanta College of Art on an MOE scholarship. But she knew from the age of 14 that she would go into architecture. She recalls reading an article on Antoni Gaudí, and being inspired by the way he married art and architecture. “I thought, perhaps I too could be an architect when I grew up.”

Art and architecture are entwined for Ms Tay. On holidays, she and her husband – they co-founded Ta.Le Architects – seek out places of architectural interest. Most of her acrylic paintings are also based on the places they’ve visited, such as Jeju island and Cinque Terre. “Sometimes we take photos but I like to also make our memories permanent in paint. Photos are very real but with a canvas, you can alter colours and lighting, or use different brush strokes to express your own interpretation.”

Urban landscapes are a frequent subject matter, but she doesn’t approach them like an architect. “When I paint buildings, I try not to get too technical. I don’t worry about making lines straight or fuss over angles. I would listen to music while I paint, so it’s very relaxing.” “Art is my creativity in 2D and architecture is my creativity expressed in 3D,” she says.

At Ta.Le, she makes a conscious effort to add a sense of delight and surprise to users’ day-to-day experiences. For instance, at the Nordic European Centre, she used a mixture of timber, glass and mirrored surfaces to play with light and shadows, and inject excitement into what would have otherwise been a mundane linkway.

Despite her affinity for art, the 36-year-old sees herself as an architect, not artist. “I’m an architect who loves to paint and create art. I’m still not an artist because being one needs more commitment, and an ambition to create and explore through art. For me, I do art because it gives me pleasure and allows me to convey my thoughts and emotions.”

A Chinatown scene. Selected in the longlist for Jackson’s Open Painting Prize 2018.

Ink-on-paper sketch of the Puri Hotel in Malacca.

Juliana Chan, 35, became an architect almost by accident – signing up for it only when university applications rolled around.

She started drawing before kindergarten, copying illustrations from her elder sister’s manga books. She was in an arts elective programme in secondary school, and it was graphic design she was set on. She even wrote to various government bodies to ask for it to be included in art scholarships.

That failed so she finally turned to architecture – the closest alternative. It didn’t turn out as she’d expected. She soon realised architecture was also very much about managing projects and budgets – perhaps more so than design.

Still, Ms Chan, now Design Architect with ACG Design Studio and founder of NS Chan Studio, says, “Once I start something I will truly fall in love with it. Now, I don’t know if I can remove myself from architecture. I just hope that I can do both art and architecture as long as possible.”

Juggling her two loves has not been easy. Time pressure is one obvious issue, given architecture’s notoriously long hours. Misconceptions are another – that architects who are also artists will be too starry-eyed and difficult to work with. “There’s very little support for people like me who are not full-time artists but want to pursue our passion,” the 35-year-old adds, citing the dwindling of art events, and the prohibitive costs of gallery rentals caused by the increasing commercialisation of art.

(RELATED: 6 quotes from thought leaders to get you thinking about the arts scene in Singapore)

That said, architecture has had a significant effect on her and her art. “I think I improved as a person. Architecture is about the client’s and the users’ needs. Unlike art, you can’t be caught up in your own fantasy world anymore. You become realistic. You become more organised. You’re not just a dreamer waiting for inspiration to come to you.”

She adds that her art has gained more depth after becoming an architect. She is able to draw buildings with greater understanding now that she has a solid foundation in architectural principles. Poring over and wrangling with architecture drawings have also nurtured her patience – she’s now unfazed even when having to painstakingly paint finicky details, such as ornate roofs of traditional houses for her urban landscapes, or when painting in miniature for her craft brooches.

Portraits too, have benefited greatly from her architect’s tendency to distil things into their simplest forms. “My portraits are a lot more chiselled and expressive now. I used to rush into details but now I would break things down into simple masses before filling in the details.”

Together with the Artists Society of Singapore, she’s hoping to put up an exhibition late next year. And as a huge fan of architects Frank Lloyd Wright and Geoffrey Bawa, she hopes to learn landscape design some day, to similarly create spaces that break down the barriers between inside and outside.