On the trail of argan oil, the powerhouse known for centuries, in Morocco

It might be the latest trend in beauty, but argan oil has long been used for its healing benefits. 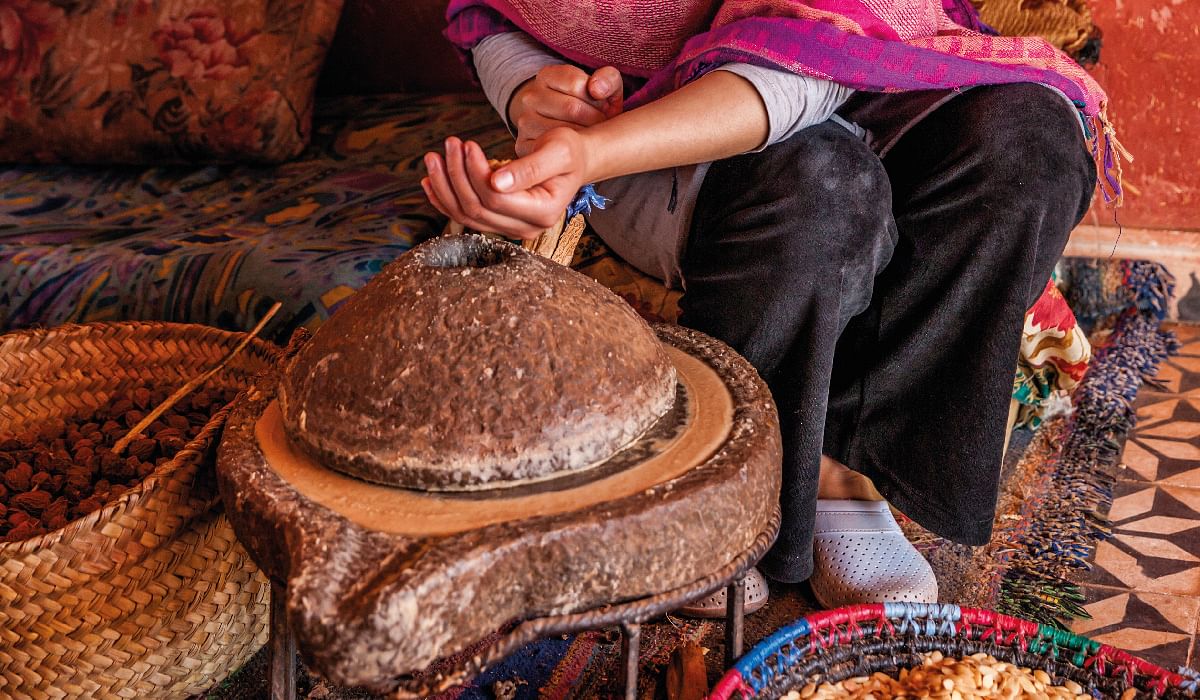 I’m perched on a low stool, legs splayed unceremoniously apart to accommodate a squat stone grinder which I’ve been turning for a good five minutes. My initial enthusiasm is rapidly fading – the treacly argan oil paste I’m pressing may as well be molasses at the excruciatingly slow rate it drips into a waiting jar. My only consolation is that I’ve proved somewhat entertaining for the row of Berber grandmothers now openly chuckling at my exertions. “Ffffhoooff,” one exclaims, sympathetically miming the wiping of sweat from her brow as she urges me to surrender and cease my labours.

I’m probably one in a long line of foreign visitors who’ve tried (and failed at) extracting argan oil the traditional way at Co-operative Feminine Tilila in Essaouira, one of over 12,000 women-run co-operatives dotted throughout southwest Morocco. In a large stone room, which remains cool and airy despite the scorching heat outside, a row of women line the walls, engaged in different stages of the oil extraction process.

(Related: Inside the hidden beauty of Rabat, Morocco’s capital city)

This begins with baskets of wrinkled, purplish-brown dried argan fruit, which fall naturally from trees in late summer. The rind and pulp are removed, revealing an extremely hard nut, which has to be manually cracked open by hand, typically by knocking it against a rock. This in turn yields one to three precious light-brown kernels, which are then pressed in specially designed machines to yield oil for cosmetic use, or roasted for culinary purposes. Nothing is wasted. The leaves and pulp are fed to livestock, husks are burned for fuel. It is – as I learned – tiring, repetitive work: It takes 30kg of fruit and 15 hours of labour to make 1 litre of oil. According to UNESCO (which in 1998 named the country’s argan forest a UNESCO biosphere reserve), argan oil retails for up to US$300 (S$410) per litre, making it the world’s most expensive edible oil.

The stratospheric price tags of the oil are a relatively recent phenomenon, thanks to a surge in popularity. “When we started (the co- operatives), it was only US$3 per litre,” says Zoubida Charrouf, a lecturer at Mohammed V University in Rabat and argan tree expert who’s widely credited for introducing the co-operative system.

Like most “miracle discoveries” in modern beauty, the unique benefits of argan oil have been known to locals for centuries. A powerhouse loaded with antioxidants, essential fatty acids and vitamin E, argan oil has been used by Moroccans to stave off and treat a wide encyclopaedia of maladies, from the trifling to the serious, ranging from wrinkles and acne to joint pain and even heart disease.

“One of my earliest childhood memories involves argan oil,” says Habiba Raffa, the Singapore-based Moroccan founder of Ayelli, a hair and skincare brand based on pure argan oil. Raffa remembers going to Agadir when she was three to visit her grandmother, who showed her exasperated mother how to use pure argan oil “to maintain the tightness, define the curls and tame the frizz” of her daughter’s unruly hair. Like most other Moroccan families, Raffa also recalls using the oil on a daily basis, in food and for “overall repair”.

“We used it to heal acne and chickenpox scars, after-sun exposure and for many other problems, long before it was clinically proven to reduce hyperpigmentation and to regulate sebum production,” she adds.

Argan oil is also used in that most quintessential of Moroccan wellness rituals, the hammam. “There, argan oil is even more special – it gives you the power to slow down, connect and pamper yourself,” says Raffa.

Today, argan oil can be found in shampoos, moisturisers, serums and body scrubs. Its gourmet cousin, oil made from roasted kernels, has become highly sought after by some of the world’s top restaurants. Golden-hued, distinctively nutty and remarkably aromatic, it enjoys star turns in Pierre Gagnaire in Paris, the Ivy in London and at Restaurant Zen in Singapore (where it tops a disc of shiso-flower bedecked caviar). For simpler pleasures, however, I think it’s best enjoyed in the form of amlou, or what Moroccans call “Berber nutella” – pulverised roasted almonds spun into a fragrant, velvety paste with the addition of argan oil and honey.

All this richness and flavour, ironically, are born from spectacularly harsh terrain. Argan trees (argania spinosa) are gnarled, spreading plants of about 8 to 10m, with tiny leaves and intimidatingly thorny branches. They can live for up to 200 years and take 50 years to bear fruit. They’re tough yet pernickety, growing mainly in a swath stretching from Essaouira to Taroudant. “It’s special here,” says Co-operative Feminine Tilila’s manager Abdullah Essakhi, citing the area’s unique terroir of calcareous soils and oceanic breezes. “Some Israelis tried to grow argan trees in Israel – the trees grew, but there was no fruit.”

According to Charrouf, argan trees play a vital role in the region’s ecosystem, serving as “a green curtain”, or “the last wall before the desert starts,” with roots that thrust deep underground, bringing precious water up to surrounding plants and protecting the soil from erosion and desertification.

Argania spinosa’s fortunes rise and fall in tandem with commercial ones – pre-argan boom, an estimated 600 hectares were lost each year in the 1970s and 1980s, due to overgrazing and deforestation. Post-boom, farmers are planting, rather than felling trees, and the Moroccan government has pledged to plant another 200,000 hectares of argan forest by 2020. An unlikely player in the oil’s fates is the humble goat, which you’ll see actually up in argan trees during the two-and-a-half-hour drive from Marrakech to Essaouira. The animals routinely clamber up the trees to nibble on their fruits and leaves, and previously locals would harvest argan nuts from the goats’ droppings, similar to how kopi luwak involves coffee cherries retrieved from civet cat waste. Luckily, this practice has fallen out of favour, with goats now considered a threat as they damage trees, a problem exacerbated by newly-wealthy argan farmers buying even more goats.

More critically, argan oil has transformed the fortunes of Moroccan women here, a traditionally marginalised group disadvantaged by patriarchy’s hegemony. When Charrouf started work on the co-operatives, 95 percent of the women in the area were illiterate and marginalised.

“Berber women typically don’t go outside the house. But we’ve organised them as producers into co-operatives – training them to use new technology, run the co-operatives in terms of administration, management, marketing, all aspects,” Charrouf shared at a 2014 innovation conference.

Apart from increasing literacy, the co-operatives have given local women agency, fair wages and business skills, with a fortunate few travelling abroad to meet big beauty brands like L’Oreal. According to Essakhi, the women at Co-operative Feminine Tilila earn on average 2,550 Moroccan dirhams ($354) per month, with additional bonuses paid out at each year’s end. Unlike in the past, most families now send their daughters to school. Much more can be done to positively impact the next generation, says Raffa, who observes men still occupy top roles as managers and co-operative presidents.

“My wish is to see more local women working beyond the manual process, to see them in managerial positions, in charge of argan production, international export relationships and innovative sustainability practices,” says Raffa. “When women benefit, children benefit.

How to buy argan oil

The oil should come in dark bottles made of premium quality glass. Light breaks down the natural properties of argan oil.

Premium cold-pressed argan oil lasts 18 to 24 months. Pressing by hand is an old technique that doesn’t conform to international quality control standards and is considered by many to be unhygienic.

While luxury brands typically charge high prices to cover their advertising and marketing expenses, pure argan oil shouldn’t be cheap. As a general rule, price is indicative of quality.

Pure argan oil has a subtle nutty scent that quickly disappears. If your oil has a different fragrance eg rose, vanilla, etc, it means it’s been diluted. No fragrance at all may mean it’s been deodorised, which is usually done for nuts taken from goat droppings.

The best argan oil instantly melts into skin – it should never feel slimy, greasy or sticky.

A yellow-gold colour, without any sediment. Colourless oils may have been bleached, which exposes them to extreme heat damage.