A fleeting love affair with a convertible in the Algarve. 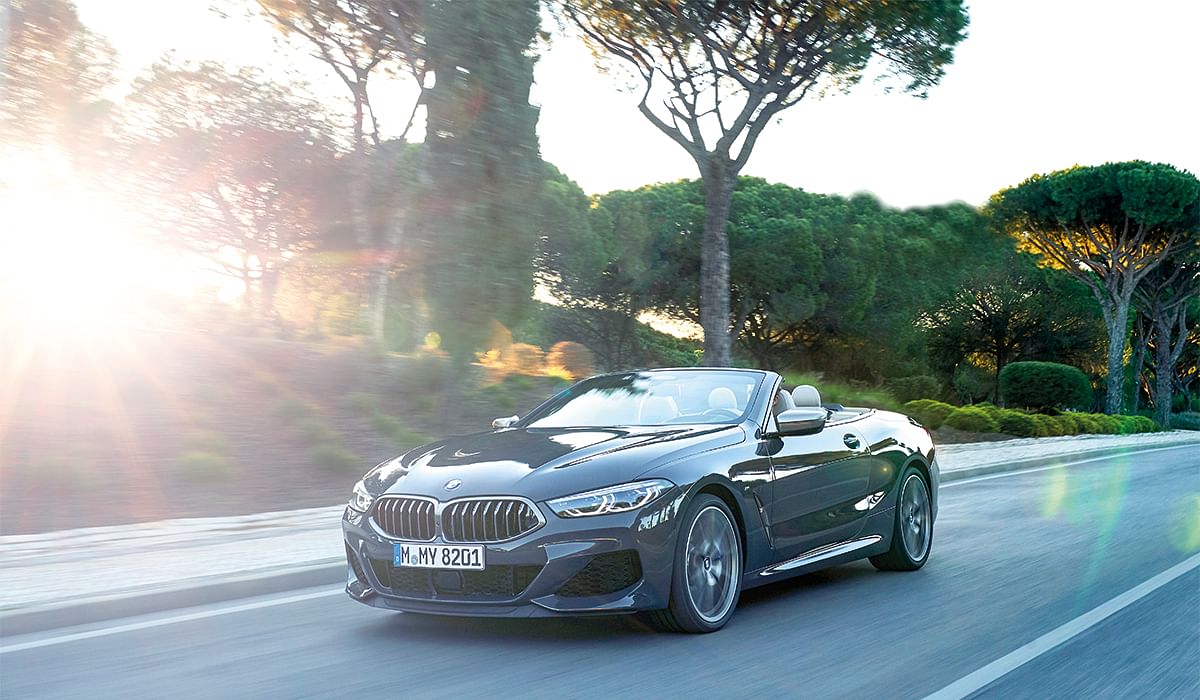 [dropcap size=small]T[/dropcap]raversing the Algarve eastwards to Spain, the motorist is presented with several options: trace the populous Atlantic coast on the A22 motorway, or zigzag across the rural, undulating hills in the middle of this southernmost region of Portugal on one of the inland routes. Always keen to take the road less travelled, I pick the latter.

On this fine morning, the sun caresses my face and maintains the mercury in the high teens. I put the beats on the Bowers & Wilkins surround sound system, pop the canvas hood down and gun the engine as I set off from the hotel in Almancil in a metallic dravite (or Dravit, in the carmaker’s parlance) grey BMW M850i xDrive convertible.

The car looks sexy from every angle, but is particularly comely viewed from the front, where its two character lines can be clearly seen running down the flanks.

Fabric instead of metal for the folding roof is in line with GT tradition.

Only to have my hitherto rapid progress curtailed at the end of the driveway. Every summer, the otherwise laidback town attracts thousands of holidaymakers seeking the Mediterranean climate and affordable everything, garnering a reputation as a holiday home hotspot for celebrities from Eric Cantona to Bonnie Tyler. Two months away from peak season, the roads are already starting to get busy, upmarket marques bearing plates from as far away as the UK forming the main culprits for the congestion.

Ensconced in what feels like a favourite armchair – this multiway adjustable seat is the best in the business – I think I could be in worse cars in a jam than BMW’s most advanced convertible.

With the “driving assistant professional” pseudo-autonomous function turned on, the car takes over the steering wheel and pedals, keeping me within my lane and at a safe distance from others.

(RELATED: BMW is developing holograms for their car controls)

This leaves me free to fiddle with the control for the air vent integrated in my headrest, to keep my neck at the right degree of toasty.

On The Road Again

Pressing on past the urbanism of the region’s first city, Faro, the traffic melts away. On and on the road unrolls, up and up the miles mount, thinner and thinner the traffic becomes. Here on the N124 that snakes through hills and dales and small farming settlements, the gleaming parade of sports cars is replaced by a smattering of smoky diesel-powered hatchbacks.

Some graciously pull over to let me pass; the Bimmer’s magnificent setup makes short work of dispatching the recalcitrant others. On the rare short stretches of straights, where lesser cars would have to suck it up, the brawny 4.4-litre V8 motor and paddle-shifting eight- cog gearbox effortlessly bring the M850i up to overtaking speed.

The massive 19-inch M-Sport brakes then nonchalantly shrugs off excess velocity – no mean feat, with this beast weighing the wrong side of two tonnes. And the four wheel drive, rear axle steering and bespoke Bridgestone mixed-sized rubbers carry the car confidently through the corner.

There is that niggling habit of the nose pushing just a bit too wide at the very edge of the car’s limits – admittedly, an area where the intrepid (or some say, foolish) few would explore. I later learn that it was a deliberate design choice – understeer being easier to handle than oversteer – that would be engineered out in the hardcore M8 version arriving later this year.

The M850i otherwise behaves like an eager puppy, and the V8’s sonorous soundtrack of rumbles and howls, appended by the cracks and sizzles from the exhaust, serves only to egg me on.

Build And They Will Come

Portugal has five times the kilometres of expressway per inhabitant than Britain; 60 per cent more than even autobahn-obsessed Germany. Much of this high-speed network was built with billions of euros of funds, generously dished out by Brussels after the country joined the union in 1986 to help it catch up with the Johanneses. Construct it did; starting from just 300km of motorway, Portugal today boasts of 3,000km.

And proper blacktops too, ranked second-finest among member states (after the Netherlands’) by the European Commission. As the M850i chews up the miles over the glorious strips of tarmac, I begin to truly appreciate its raison d’etre.

A passing shower necessitates the raising of the soft-top – it takes just a swift quarter of a minute to perform the task, even while the car is moving up to 50kmh. And despite the swop of roof material from metal to cloth, noise levels are startlingly indistinguishable from the coupe’s. The chassis, too, remains effectively as stiff as its sibling’s, despite the scalpel having been liberally applied.

And since we are making comparisons with the coupe, yes, you do lose 100 litres of boot space (down from 450 litres) and the seat back at the rear, where in practice nobody but small children really sit. As conventional wisdom goes, convertibles are all about compromises, but not quite this one.

What’s In A Name?

There is just that one fault, which the convertible shares with the coupe, that continues to bug me: the nameplate and the expectations that go with it.

The number “8” has always been attached to the most storied models in BMW’s history. Such as the legendary E31 8 Series back in the 1990s, with the era’s de rigueur pop-up headlights, that featured in posters adorning many a teenager’s bedroom wall – including this one’s.

(RELATED: The New Magnificent: A review of the BMW 7 Series)

Or the short-lived but no less lust-worthy Z8 roadster. And more recently, the i8 plug-in hybrid supercar, a technology tour de force. All of these cars are virtually bespoke.

The problem then, with the new 8-series is that it just does not feel as special as its forebears, whether in terms of the styling or the interior – both of which are very well executed, mind you, and feature the best of what BMW has to offer. But the cars’ resemblance to models lower down in the range – and the recently discontinued 6-series coupe and convertible and, soon, the four-door Gran Coupe that the 8-series had for all intents and purposes replaced – is simply too close for comfort for such a haloed epithet.

(RELATED: A sneak peek at the BMW 8 series that will be resurrected in 2018)

At the launch of the series, BMW contended that it now reserves the appellation for its most sporty models. And I suspect most people would not have a similar hangup as this. In any case, the badge has nothing material to do with the car, which works superbly as a grand tourer, as a boulevard cruiser and as a sports car, regardless of its moniker.

At the lunch stop and turn-around point near the Spanish border, I am again faced with the same route options, but in reverse. Despite the lure of some of the emptiest, smoothest expressways on this continent, the choice is clear. After all, I have hatchbacks to hunt. I head back the same way I came, cracking, rumbling, howling and sizzling away.

In the BMW M850i xDrive convertible.

The slimmest of any BMW model, the slender front lamps accentuate the car’s low-slung, menacing mien. But it is not all show and no go: They come with optional Laserlight that illuminates the road ahead variably to avoid glare, up to an astonishing range of 600m.

For some visual bling, glass can be applied to a number of controls in the car, including the transmission selector lever, through which an illuminated “8” can be seen. The material also offers the benefit of a more tactile feel – important when you need to adjust something while keeping your eyes on the road.

The “Live Cockpit” is a fully digital high-resolution instrument cluster that runs on BMW’s latest operating system. While we feel that the reverse-sweep tachometer is style over substance, the new OS brings along improvements such as a customisable tile-based interface for the control display.