5 future car technologies that will be commonplace within a decade

What would be mainstream in the motoring industry in the next couple of years? 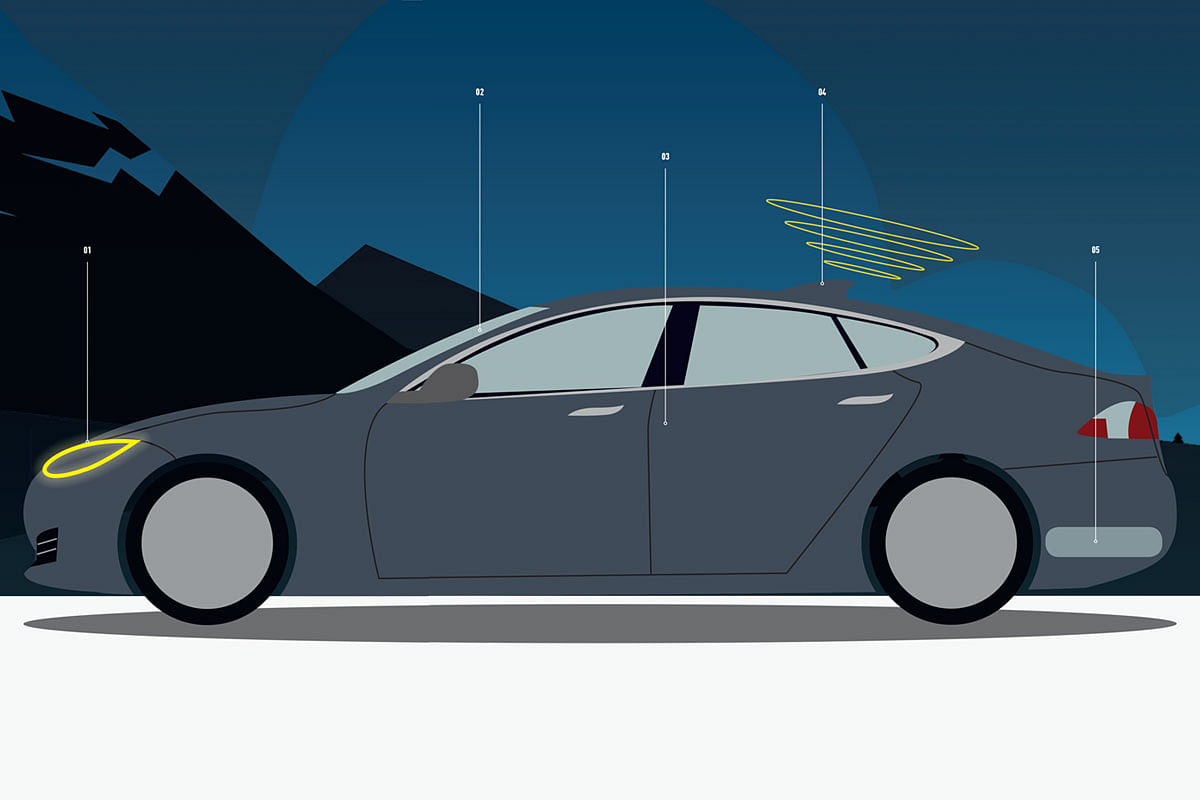 [dropcap size=small]P[/dropcap]redictions are, by definition, hit or miss. And, if commentators from the 1950s were anything to go by, mostly miss – otherwise, we would all be zipping around in flying cars today. To avoid the same embarrassment, The Peak eschews blind optimism and scours laboratories for promising, nascent technologies, to make educated guesses on what would disrupt the automotive mainstream within 10 years. Here is what we found.

Taking inclement weather and seasons into consideration, cars are driven on average about a quarter of the time in darkness. So why are headlights so neglected, apart from receiving bulb-technology updates every 10 years or so? The good news: headlights are starting to get the attention they deserve. Audi and BMW have already installed super bright lamps that work by reflecting light produced by lasers within the headlight assembly. Elsewhere, LED headlights, which are composed of many light sources instead of a monolithic one, allow motorists to selectively shut off parts of the beam to avoid blinding other drivers. Expect the car of the future to be illuminated in fancy ways not possible before, such as in a thin line across the entire width of the car, thanks to the small size of each LED, which gives designers plenty of flexibility to create bold, new graphics.

(RELATED: 3 new luxury cars from BMW, Lexus and Maserati to try out.)

Let’s be brutally honest. While augmented reality (AR) exists today, it serves little purpose beyond providing amusement. Cars, on the other hand, have a large windshield and surfeit of space for computers, a platform ripe to become the next killer platform for AR. Its precursors are here: small heads-up displays are commonly available, but they are little more than fancy speedometers and navigation maps. More novel are infrared detectors, lidars and radars, which sense traffi c signs, encroaching vehicles and even straying animals. The next step would be to combine and supersize such systems, by overlaying contextual information on top of what a driver sees in real life. Imminent collisions, for example, could be highlighted in red, or lanes suitable for the next turn could be lit up in green. Equipment suppliers Harman, Continental and Visteon have been showing off such concepts.

As it is with new technologies, costs are starting to slowly come down, thanks to massive investments in research and development.

Stiffer yet lighter than steel or aluminium, carbon fibre-reinforced plastic (CFRP) helps cars locomote faster, handle better and consume less fuel. This high-tech material made its automotive debut in Formula One in the early 1980s, quickly finding its way into production in a 1992, 391kmh McLaren supercar. But little headway has been made since. Today, it is still rarely seen outside of limited-edition, million-dollar exotics. This is because CFRP suffers from a big problem: It is complicated – read: expensive – to produce, making it uneconomical for mass-market cars. But as it is with new technologies, costs are starting to slowly come down, thanks to massive investments in research and development. In 2014, the BMW i3 electric city car became the first high-volume car to be made extensively with CFRP. Stricter emissions laws will surely push manufacturers harder to drive costs down.

Today’s high-end cars can change lanes and adjust their speed to suit traffic conditions without human intervention. Marques such as Tesla and Audi have models or prototypes that can travel long distances completely on their own. Yet, conservative regulations, in part spurred by drivers’ fear of loss of control, have stymied the wider adoption of self-driving technology. Vehicle-to-vehicle communication (V2V) is an exciting new development in this arena that should help allay concerns. By relaying information with one another, cars can be made safer. Suppose a rogue driver runs a stop sign. Before you can even react, his car would have already sent a warning to yours. The brakes are automatically applied, and collision is avoided. Studies by the American National Highway Traffic Safety Administration estimates that V2V could reduce crashes by 79 per cent.

It is rather surprising to note that the electrical supply in cars has not changed much since the ’50s. Running on 12 volts, a car’s capabilities are being stretched thin by the hefty requirements of today’s cutting-edge gizmos. Enter the 48V system. The Volkswagen Group, for example, has installed this beefier supply of juice in its Audi SQ7, in order to spool up a supercharger within 30 microseconds to decimate turbo lag. The Bentley Bentayga deploys a similar setup to drive an anti-roll bar that reacts to the terrain for better handling on- and off -road. Carmakers are even thinking of using the technology to create “mild hybrids”. Honda, for example, has fitted it on a prototype diesel-powered Civic to smooth out power delivery. The company estimates that 48V electrics bring two thirds of the benefits of a full hybrid – lower fuel consumption and better performance – at one third the cost.

(RELATED: Porsche’s latest Cayenne is hotter, nimbler and sleeker than ever before.)